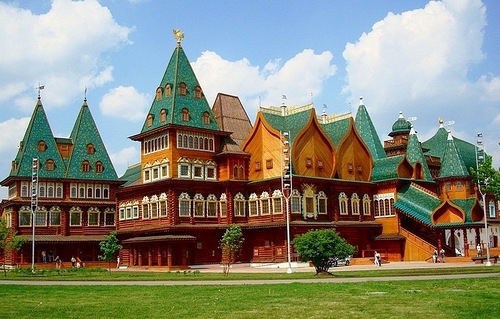 Kolomna Palace Russia
Original wooden palace, built in 1667 -1672, Kolomna Palace amazed noblemen and foreign ambassadors with its splendor, so they even named the palace “the eighth wonder of the world”. Unfortunately, 100 years after its construction, authorities demolished the palace, because of its decrepitude. However, Empress Catherine II ordered to reconstruct a wooden model of the palace before its dismantling. And nowadays the palace reconstruction has become possible with the help of this model.
The Kolomna palace of Tsar Alexei Mikhailovich opened its doors on the 4th of September, 2010. The appearance of the palace is almost identical to that from old images.
END_OF_DOCUMENT_TOKEN_TO_BE_REPLACED 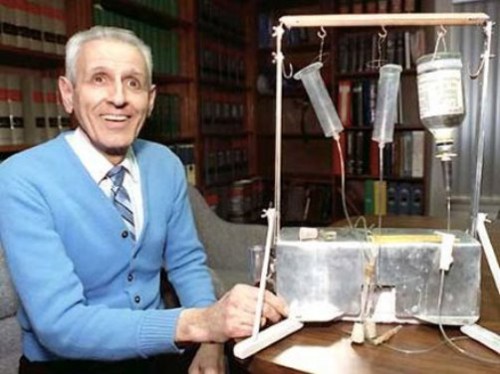 Art of Doctor Kevorkian
Do you remember Doctor Kevorkian, nicknamed Dr. Death? The auction held on October 28, 2011 will sell out the machine, designed to minimize pain when end lives. On sale also more than 100 of Kevorkian’s personal items. In particular, artwork, handwritten documents from prison, a bulletproof vest, a paint kit, a typewriter and a pearl flute. The auction will be at the New York Institute of Technology in Manhattan, with a percentage of proceeds going to the charity Kids Kicking Cancer, according to the Kevorkian Estate. Noteworthy, the paintings valued between $2.5 million to $3.5 million.
END_OF_DOCUMENT_TOKEN_TO_BE_REPLACED 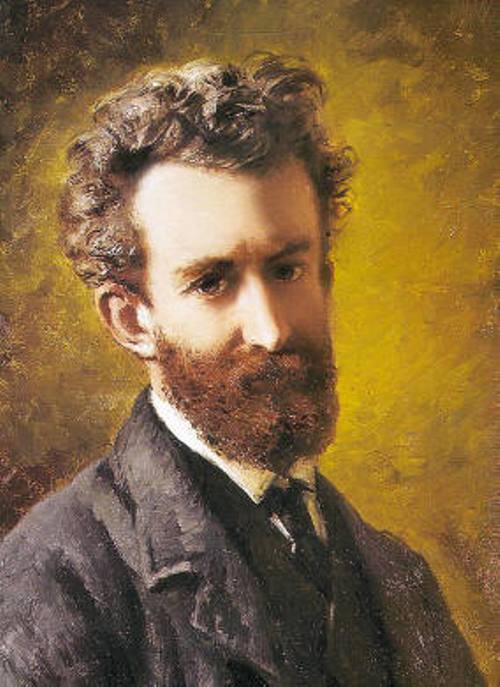 Russian traveler Nikolai Miklouho-Maclay – an outstanding scientist and humanist, anthropologist and zoologist, widely known in Russia and abroad. In 1871 Miklouho-Maclay went to New Guinea, where he spent 15 months. The people of New Guinea remember the first European who stepped on their land and lived among them as their devoted friend. The bay where he lived has been named “Maclay Coast”. Stamps have been printed in his honor and there are many legends about him among the Papuans. Nikolai Miklouho-Maclay won the trust and admiration of the local people in New Guinea. And, in spite of the fact that he caught malaria in New Guinea and was very ill, he wrote, “…in no other corner of the globe where I have had to live during my wanderings, have I ever felt such an affection as to the coast of New Guinea.”
END_OF_DOCUMENT_TOKEN_TO_BE_REPLACED 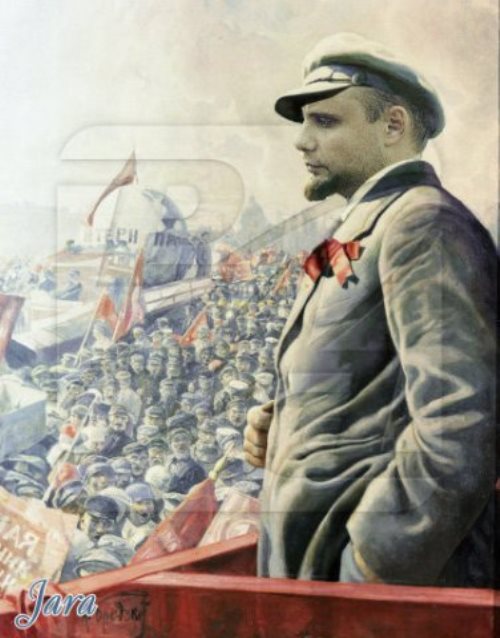 In the image of Vladimir Lenin – Creative and talented Semyon Frolov

Creative and talented Semyon Frolov
Born November 12, 1979, in the town of Apatity, Murmansk region, Semyon Frolov is a freelance showman, presenter, entertainer, organizer of weddings, shows and corporate events. In addition, Part-time producer, writer and performer of his own songs and director of his own music videos. Semyon Frolov – former member of the TV project Dom-2 on TNT channel of Russian TV.
When he was fourteen years old, his family moved to the village of Churilovo, Tver region. A year later he entered the Tver School of Music, and in 1998 he became a laureate of the International Competition “Play, accordion!”.
END_OF_DOCUMENT_TOKEN_TO_BE_REPLACED 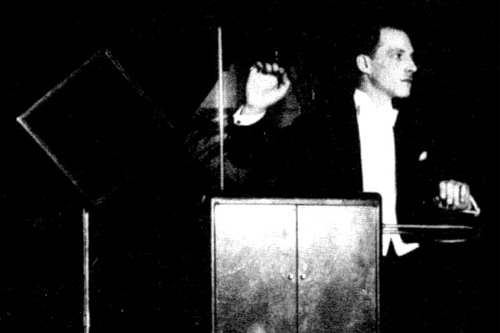 Theremin and theremists
If God or Gods or Angels or Devils could play a musical instrument, this would be, with no doubts, Theremin. An unprecedented Russian innovation, it’s simply magic. It’s a musical instrument that can’t be touched. Or, better: touched with no touch. The Theremin player, or the theremist, looks like a maestro with no button, a commander of an invisible orchestra, inebriating the listener with ether. In fact, theremin sounds like the wind coming inside through the window, or like the hypnotic chant of a mermaid, like the invisible presence of a phantom.
A performer manages sound without touching the instrument. Particularly, with the help of hand movements in the air near the two antennas, the only tool of its kind.
Meanwhile, Theremin sounds in academic, jazz, rock and pop music, Soviet and foreign films. Noteworthy, outstanding personalities played the theremin – Vladimir Lenin, Charlie Chaplin, and Albert Einstein. Today, such musicians as Sting, Jean-Michel Jarre, Rammstein, Led Zeppelin, Beatles, Pink Floyd, Portheshead, Sting, Сплин, БГ, and БИ2 used it.
END_OF_DOCUMENT_TOKEN_TO_BE_REPLACED 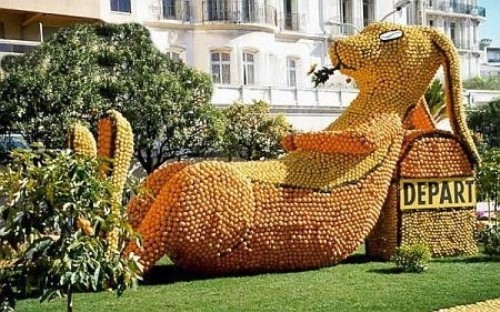 The Menton lemon festival
Held on the traditional carnival date, 40 days before Lent, The Lemon Festival is quite unique and beautiful event. Famous in the world, it attracts each year more than 230,000 visitors – a constantly increasing attendance. In fact, it is the second biggest event on the French Riviera, after the Carnival of Nice and before the Formula 1 Grand Prix in Monaco. Noteworthy, the services of over 300 professionals take part in it, and it requires 145 tons of citrus fruit.
The Lemon Festival (Fete du Citron) usually takes place between mid-February until March in Menton. The city, located in Alps-Maritimes, in the beautiful area of Provence-Alpes-Cote d’Azur, France. Naturally, the lemon has become Menton’s symbol, routed in old local traditions with the new motto “My City is a Garden”.
END_OF_DOCUMENT_TOKEN_TO_BE_REPLACED 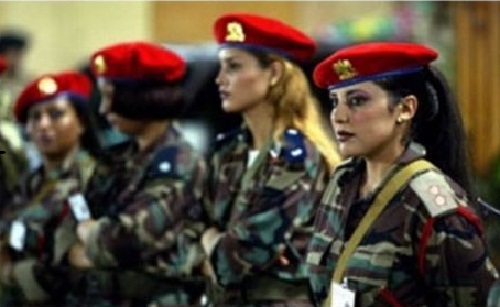 Gaddafi’s bodyguards
Often called Amazon Guard, they were female elite bodyguards of Libyan leader Muammar Gaddafi. Meanwhile, their official name was “revolutionary nuns”, or “green nuns”. The detachment consisted entirely of women who had received special military training. The division formed in the early 1980s, a few years after his resignation from the post of Gaddafi Libyan state and acceptance of of another title. In particular, the leader of the revolution together with the declaration of Libya’s Jamahiriya. However, the reasons for creating such a unit is unclear. According to the most common version, Gaddafi allegedly suggested that Arab terrorists, the victim of which he could be, will not be able to shoot at women. And another version, though more prosaic – female bodyguard was just one of the bizarre ways to attract the attention of the world.
Traditionally, 15 “Amazons” accompanied Gaddafi during his visits through the country and abroad. Noteworthy, in 1998 one of his bodyguards had saved his life at the cost of her own.
END_OF_DOCUMENT_TOKEN_TO_BE_REPLACED