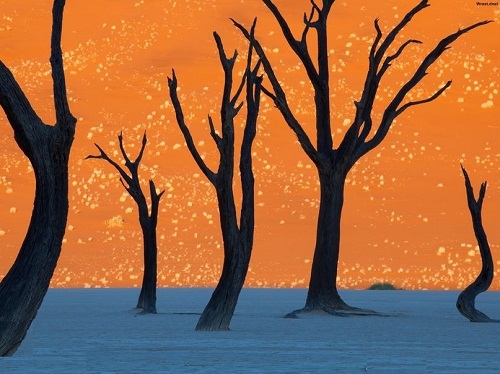 One may think this is an oil painting, but this is not. These breathtaking photographs were taken by Frans Lanting, in the coastal desert Namib, in southern Africa. The name Namib is of Nama origin and means “vast place”. Sossusvlei is a clay plateau, in the central part of the Namib, known for red sand dunes (up to 400 m in height). During the short wet period, usually in February, it is filled with the waters of the Tsauchab River. The Sossusvlei is the famous Valley of the dead, known for skeletons of dead trees. Frans Lanting has received numerous awards for his work as a photographer and conservationist, including top honors from World Press Photo, the Sierra Club’s Ansel Adams Award, the title of BBC Wildlife Photographer of the Year, and Sweden’s Lennart Nilsson Award. Prince Bernhard of the Netherlands inducted him as a knight in the Royal Order of the Golden Ark, that country’s highest conservation honor.
END_OF_DOCUMENT_TOKEN_TO_BE_REPLACED

Speleotherapy in Solotvyno Salt Mine 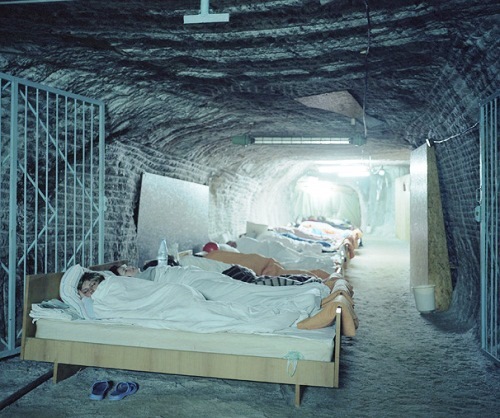 Karpaty region of Ukraine. Speleotherapy in Solotvyno Salt Mine

Speleotherapy in Solotvyno Salt Mine
Used for many years, Speleotherapy is an effective treatment for patients with breathing problems. Located in Solotvyno, Ukraine, Salt Mine is one of the most unusual hospitals on Earth. In particular, under Earth – hundreds of meters below the surface. The author of these photographs Kirill Kuletski, known Russian photographer. For decades, Salt Mine tunnels have hosted patients with various bronchial blockages, asthma and breathing problems. In the Solotvyno allergological hospital patients use to suck up the curative air. According to Kuletski, the atmosphere among patients is “calm and relaxed”, despite the “appallingly unsafe conditions.”
END_OF_DOCUMENT_TOKEN_TO_BE_REPLACED

Beautiful Squirrels in the park 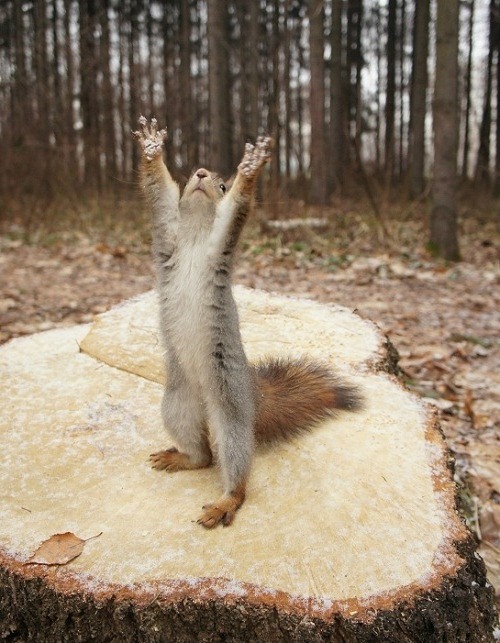 Praying to the forest God, give me nuts, please. Beautiful Squirrels in the park

Squirrels in the park
Russian wildlife photographer nicknamed igorant765 lives in St. Petersburg. In the north of St. Petersburg there’s Udelny Park (Specific Park) with lots of pine trees. The trees – chosen by the real masters of the forest – squirrels. According to the photographer, the animals are very friendly and sometimes go out to meet people and say hello. And here, you can feed cute animals just “from a hand”. However, not only squirrels, but also birds. Indeed, a charming scene when squirrels run around the tree trunks in the park. Even more enjoyable when squirrels – gray, red and brown, run down to take the nut from a human palm.
END_OF_DOCUMENT_TOKEN_TO_BE_REPLACED

The life of two Murziks the cats 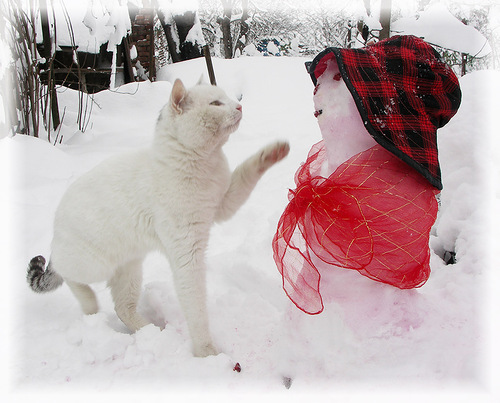 The life of two Murziks the cats
I really don’t know much about this young photographer nicknamed Kozandrevna, but her photo albums have attracted much attention on the Russian internet. Kozandrevna takes pictures of two cats, whose names are the same – Murzik, and not to be confused they are called White Murzik and Gray Murzik. The cats are brothers, but white Murzik had been taken to live in a big city, when he was a kitten, and gray Murzik stayed in the village. From time to time white Murzik visits his brother in the village, and acts like he is not a guest, but a host. In short, the curious, emotional and smart white cat simply rules.
END_OF_DOCUMENT_TOKEN_TO_BE_REPLACED 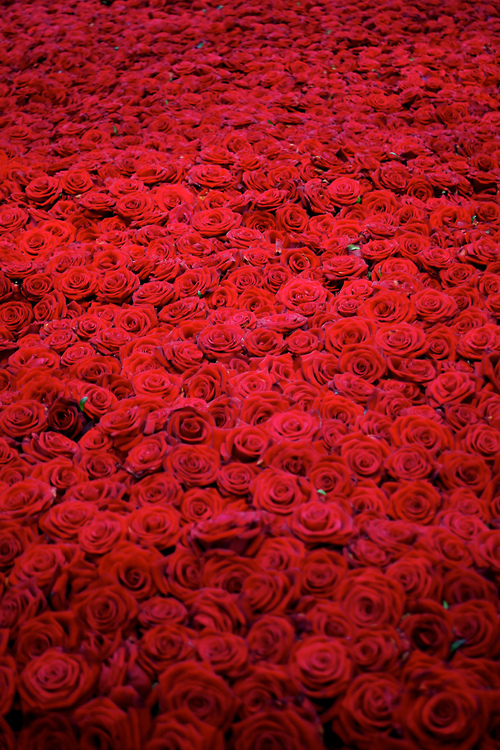 The dying flowers installation
London based Scottish artist Anya Gallaccio has made an installation of 10,000 beautiful Holland roses, trees, flowers, candles, sand, and ice to explore the process of natural decay. According to the artist, she likes the mixture of celebration with death or decay. Her work is featured in numerous public and private collections, such as the Tate Gallery, the Victoria and Albert Museum, South Gallery in London, and the Museum of Contemporary Art in Sydney.
END_OF_DOCUMENT_TOKEN_TO_BE_REPLACED 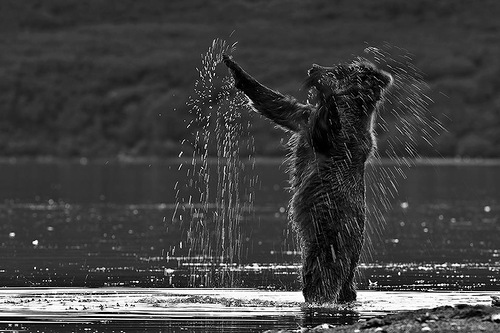 Kamchatka animals by Sergey Gorshkov
Russian professional wildlife photographer Sergey Gorshkov has been taking pictures of wild nature for many years. Sergey says, «My camera is a connecting link between me and wildlife. Through the lens of the camera I can see things, take pictures and try to reproduce beauty of the wild nature, a piece of what I have seen and I have felt being there. It is in their escaping world which is disappearing, little by little from the face of the earth». Kamchatka is Sergey’s favorite place of shooting. According to the photographer, the wild nature of Kamchatka is so fascinating and amazing that many years of work have gone as one day.
END_OF_DOCUMENT_TOKEN_TO_BE_REPLACED 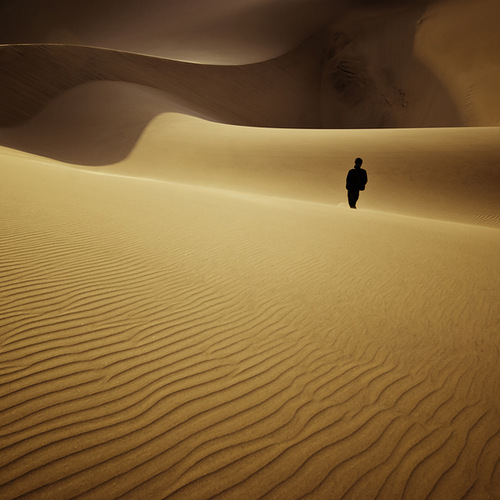 A lonely traveler in the beautiful African Namib Desert

“A desert is a place without expectation“. Nadine Gordimer. The desert is a horrible and cruel world at the same time. And still, it is incredibly beautiful in shapes, curves, and warm colors. And to everyone who visit it, a desert gives high serenity and wisdom. Besides, to be indifferent is impossible – as the the appeal of its emptiness is too strong.
END_OF_DOCUMENT_TOKEN_TO_BE_REPLACED