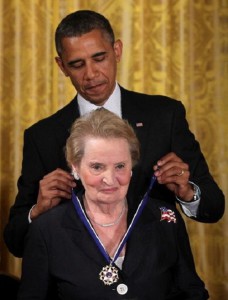 Former U.S. Secretary of State Madeleine Albright is presented with a Presidential Medal of Freedom by U.S. President Barack Obama during an East Room event May 29, 2012 at the White House in Washington, DC. The Medal of Freedom, the nation?s highest civilian honor, is presented to individuals who have made especially meritorious contributions to the security or national interests of the United States, to world peace, or to cultural or other significant public or private endeavors.