Curse of the Crying Boy 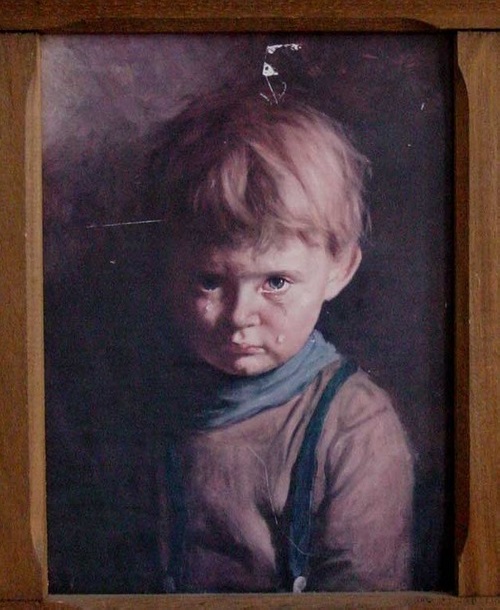 Famous painting which has become a legend. Curse of the Crying Boy

Curse of the Crying Boy
Painting by Spanish artist Bruno Amadio, also known as Giovanni Bragolin, the “Crying Boy” has become a legend. However, there are numerous alternative versions – all portraits of tearful young boys or girls.
Noteworthy, a series of mysterious house fires in 1985 lead to the discovery. Strangely, in each case, in the completely destroyed houses and buildings the painting – “Crying Boy” remained untouched! In particular, about 40-50 recorded cases of house-fire had destroyed everything except for the picture. Accordingly, the phenomen became known as the “Curse of the Crying Boy”. 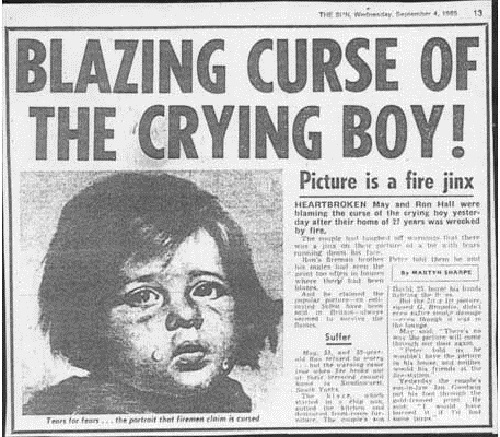 The picture was a portrait of an orphan painted by a Spanish artist. According to legend, his studio burnt to the ground, and the boy was later killed in a car crash. However, the curse still appears to apply to all the copies. Besides, the curse will only effect someone if the owner of the painting becomes aware of it. And some psychics have claimed that the painting is Haunted by the spirit of the boy it depicts.

In the mid-1980s, The Sun led an active struggle for readers. Kelvin MacKenzie, editor of the newspaper needed the public sensation. September 5, 1985 The Sun published an article about the portrait. Article actively used words such as “curse” , “Jonah”, “fear”, “horror”. The article also cited a report of this kind: “In case of fire all my paintings were destroyed, except for the Crying Boy” and “Those my relatives and friends who purchased the picture suffered from fire”

The article also concluded that the presence of reproduction greatly increases the risk of fire or serious injury. So, Rose Farrington of Preston, in a letter to the newspaper wrote: “I bought the portrait in 1959. Since then I have lost my husband and three sons. I often ask myself, maybe they were cursed?” In another letter, reported that when one of the readers tried to burn a reproduction it wasn’t burned, despite the fact that the painting was in fire for an hour.

The allegation that the reproductions are off once again reminded the public about the interview with a firefighter. He could not explain how the portrait remained relatively intact, although the entire environment burnt out. The Sun, however, was not at all interested in rational explanations, saying that “the fire does not have a logical explanation for the recent series of incidents.” 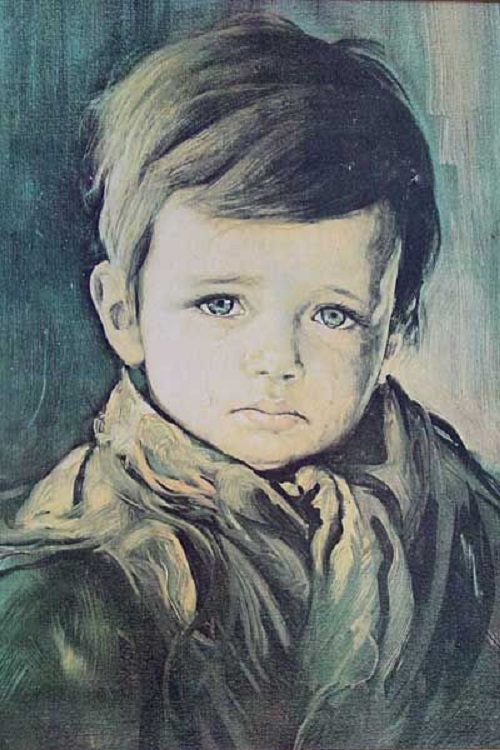 Meanwhile, even copies of the painting can bring bad luck. Curse of the Crying Boy

It soon became clear that the pictures that have participated in various incidents are not copies of one picture. Some of the paintings attributed to Spaniard Giovanni Bragolini, others – to Scottish artist Anna Zinkeisen. The 5 different types of pictures had only two things in common: they depicted children and the paintings were sold in large quantities in the English department in the 1960s and 1970s.

Journalists, referring to specialists on the occult, suggested that perhaps the author of the original portrait abused child model, and fires may be the curse of the child, his revenge.

Soon in Rotherham there was another fire, in the house there was also the painting of Anna Zinkeisen. A lot of rumors and speculation forced the Fire Department of South Yorkshire to make a statement. They explained the reproduction was not damaged due to the fact that it was printed on very heavy paper. 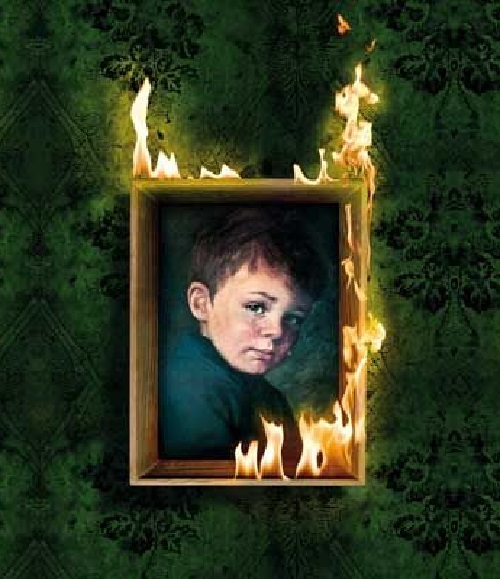 However, this statement could not exert much influence on public opinion. After another fire, which affected Italian restaurant, the newspaper issued a statement: “That’s enough. If you have the painting “Crying boy” in your home, immediately send it to us. We will destroy it and relieve you from the curse.”

Curse of the Crying Boy 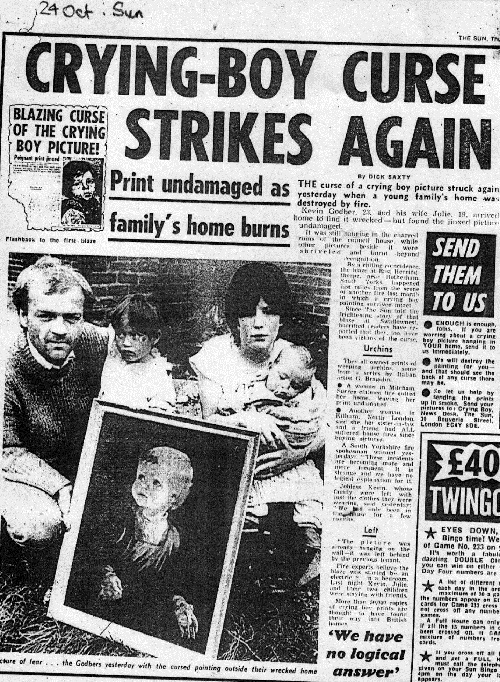 Soon the local edition reproductions was inundated with a whole room. It was soon discovered that the editor Kelvin MacKenzie is prone to superstition. When one of the editorial staff hung the reproduction on the wall, Mackenzie saw it, he stopped and turned pale, and then ordered to remove the picture and take it away: “This is not good”.

Similarly reacted the fireman Alan Wilkinson. Although he said he was not superstitious, but didn’t take the presented to him reproduction. Another firefighter Mick Riley, also threw the reproduction away, saying it did not match the interior. Another reproduction given to him, Wilkinson hung on the fire station, but after a few days had been instructed to remove it. 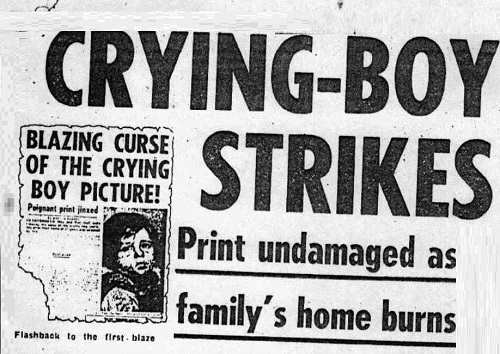 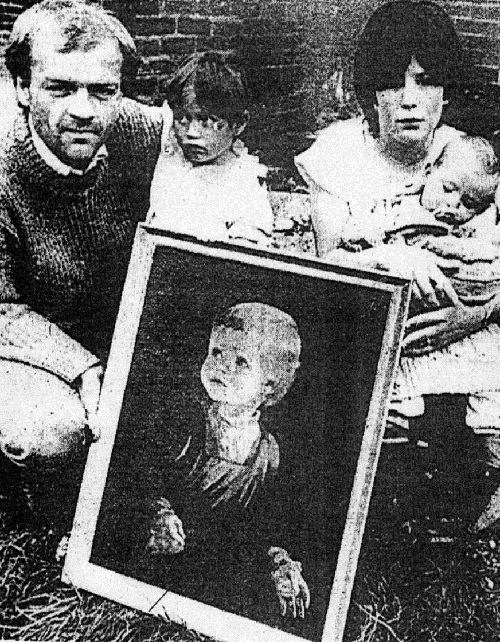 Victims of Curse of the Crying Boy 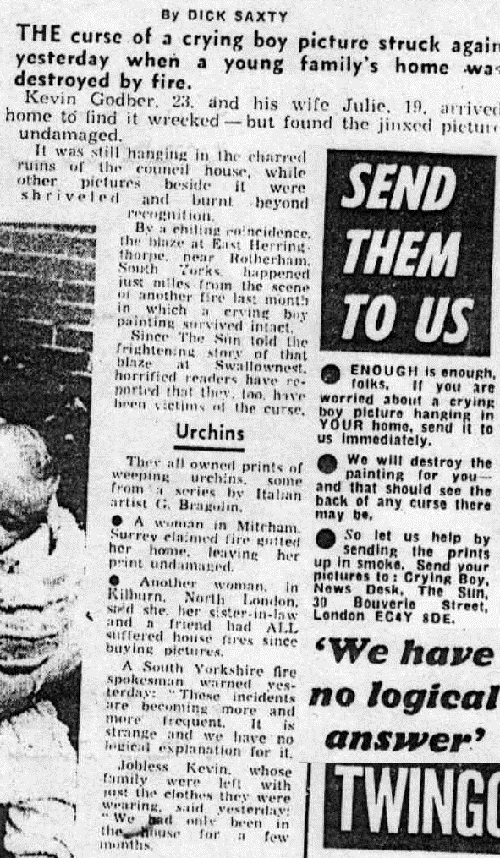 We have no logical answer. Curse of the Crying Boy