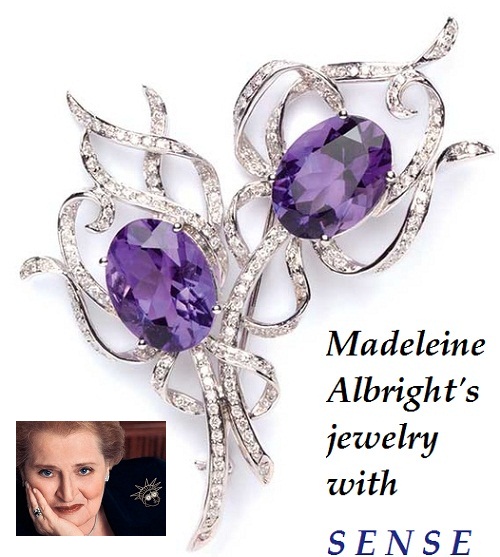 Madeleine Albrights jewelry with sense
Everyone knows about the love of the former U.S. Secretary of State Madeleine Albright to the brooches. It was also a natural love of a woman to jewelry. And, we know that each brooch had the message. Her book “Read My Pins” tells a story how one woman’s jewelry collection was used to make diplomatic history. Madeleine used a pin or a brooch as a means of personal and diplomatic expression, thus, jewelry had become part of her personal diplomatic arsenal. “None of this would have happened without Saddam Hussein,” said Albright. When the Iraqi press called her an “unparalleled serpent,” she made sure to wear a snake pin during her next meeting with Iraqi officials. From that day brooches had become Albright’s diplomatic style, her self-expression, sense of humor, and simply sense. The jewelry pieces she wore was not only a political message, in addition, they were beautiful art work of jewelers. 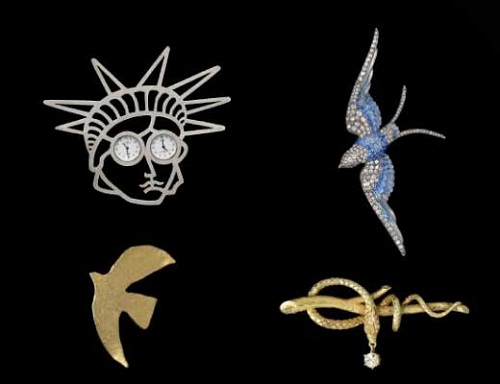 International leaders saw a shimmering sun on her jacket or a cheerful ladybug, a crab or a menacing wasp. Her collection is both international and democratic—dime-store pins share pride of place with designer creations and family heirlooms. Included are the antique eagle purchased to celebrate Albright’s appointment as secretary of state, the zebra pin she wore when meeting Nelson Mandela, and the Valentine’s Day heart forged by Albright’s five-year-old daughter.
Madeleine Albright served as America’s sixty-fourth Secretary of State from 1997 to 2001. 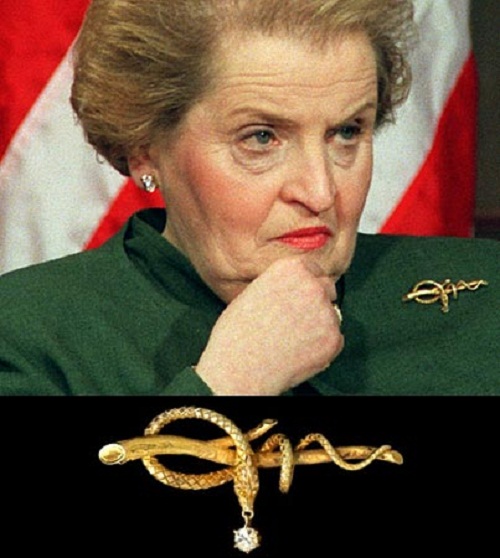 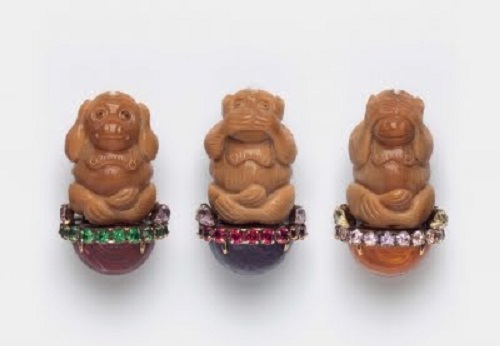 Three wise monkeys. She wore this brooch at a meeting with Putin

According to Albright, Putin became terribly angry. But I think there’s some misunderstanding. In fact three monkeys in Russia means “I hear nothing, I see nothing, I will do nothing”, or I am deaf and blind to your problems, the intention to do nothing is not acceptable, when things must be done or decision on a problem should be made. Besides, Madeleine was a symbol of evil for Russians, and her “do no evil” call sounded strange, to say the least. 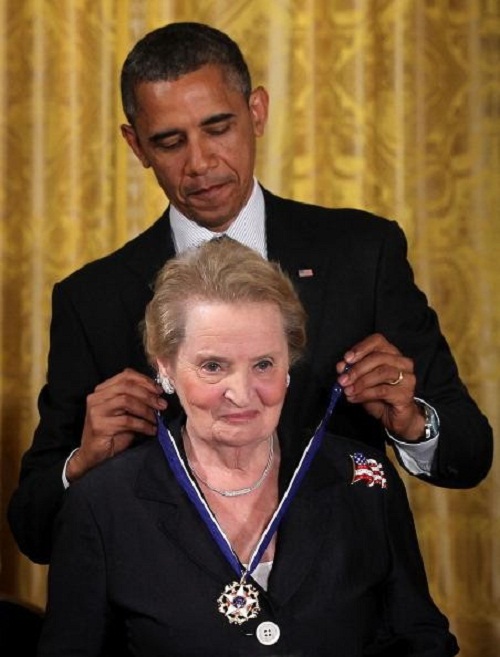 Former U.S. Secretary of State Madeleine Albright is presented with a Presidential Medal of Freedom by U.S. President Barack Obama during an East Room event May 29, 2012 at the White House in Washington, DC.

The Medal of Freedom, the nation’s highest civilian honor, is presented to individuals who have made especially meritorious contributions to the security or national interests of the United States, to world peace, or to cultural or other significant public or private endeavors. 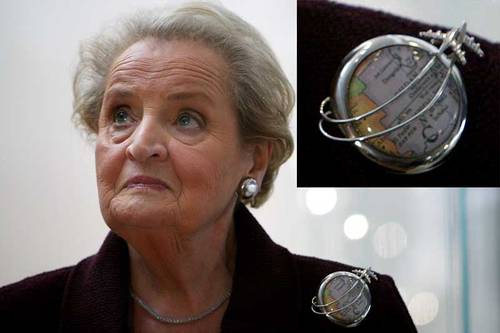 Wearing a pin displaying a map of Sudan

Madeleine Albright, wearing a pin displaying a map of Sudan. The former Secretary of State supports an intervention by the worldwide community to help put an end to the many years of violence in that country. 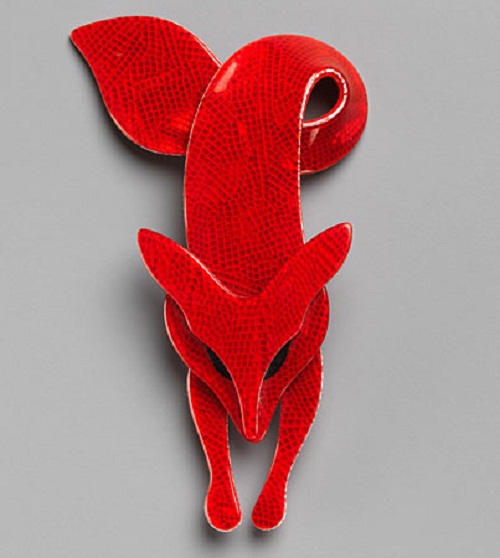 A female fox: This red fox Albright wore to meet with officials from South Korea. A Korean ministers, said he was glad about her visit because of the possibility to cuddle up to her “corporate bust” 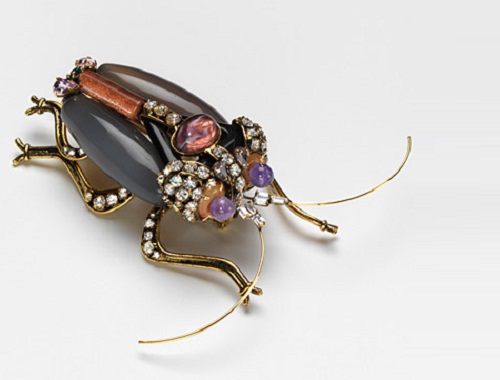 Spy Games: Albright wore this brooch on a meeting with government officials, after receiving a report from the U.S. FBI about found “bug” in the courtroom. Beetle brooch, designer Iradj Moini (USA), 1997. 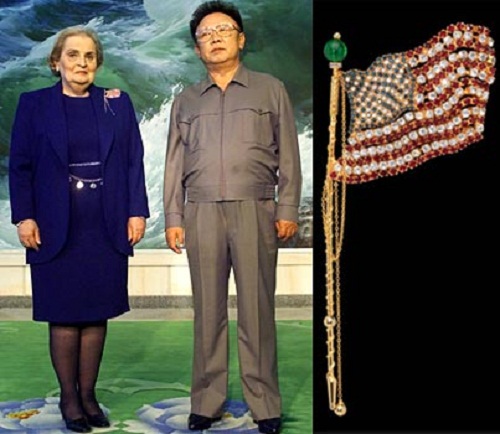 Albright has a huge collection of brooches in the form of an American flag. But in North Korea, she put the largest brooch. Designer Robert Sorrell, 2000 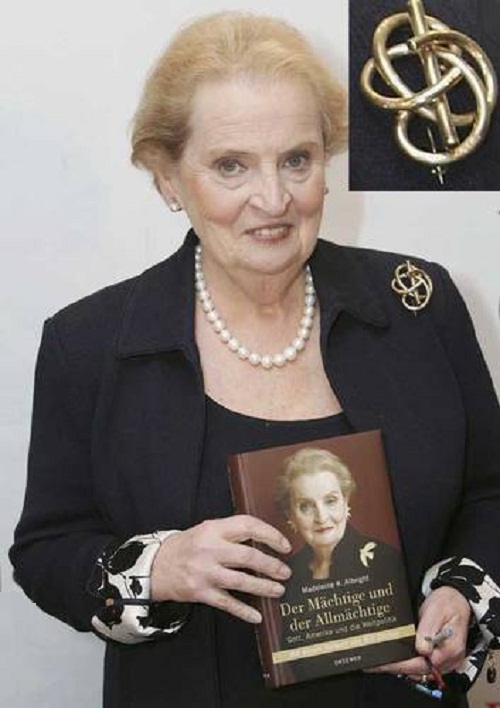 Stories From A Diplomat’s Jewel Box

In her new memoir Read My Pins: Stories From A Diplomat’s Jewel Box, Secretary Albright relays anecdotes of how her now-famous brooches played a role in both her diplomatic and personal life. 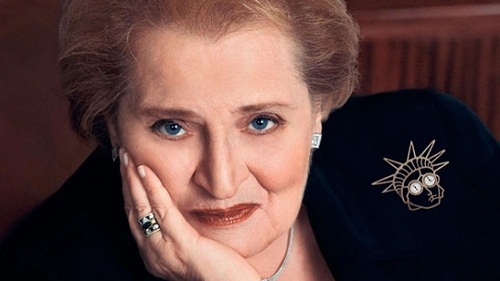 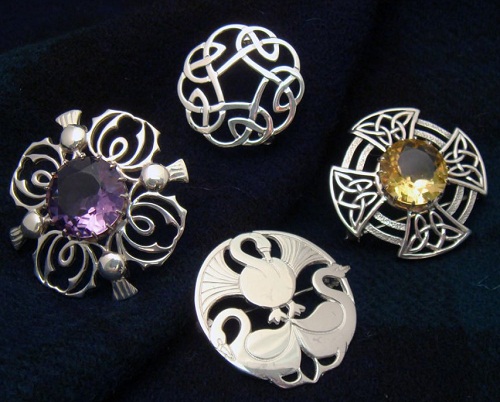 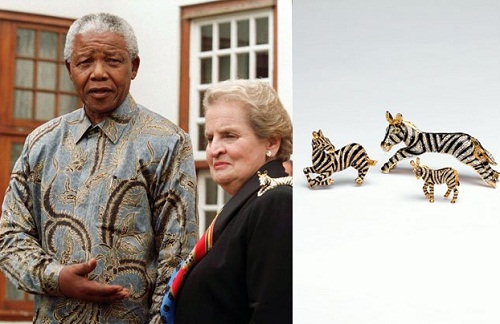 At a meeting with Nelson Mandela 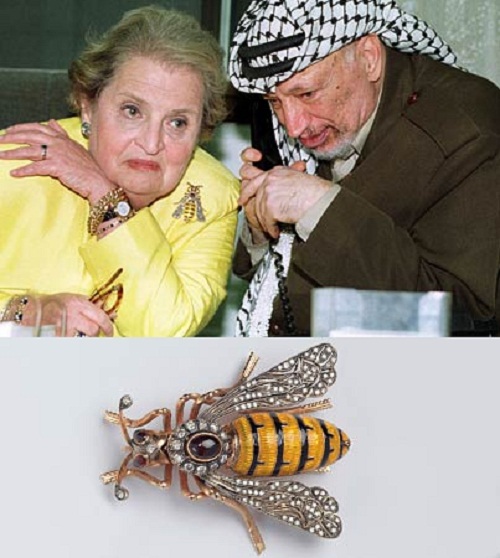 Bee brooch to meet with Yasser Arafat. “It reflected my mood at the time”. Brooch by unknown designer, 1980 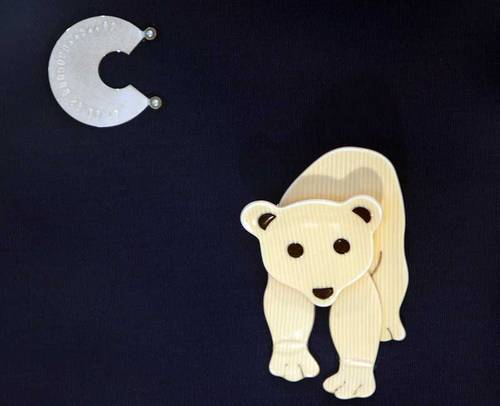 Polar bear pin. She wore it when she visited the Arctic in 2008 to discuss climate change. 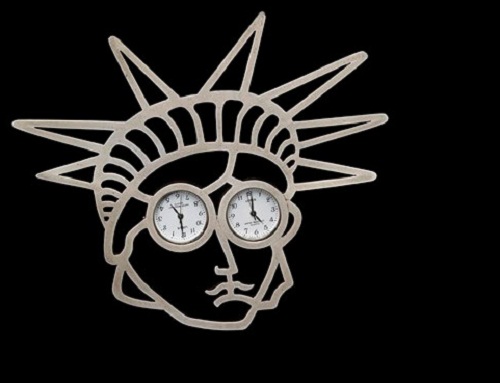 Eye in the form of dials on brooches signaled the need to adhere to the exact rules during meetings. Brooch “Freedom”, the designer Gus Bakker, Netherlands, 1997 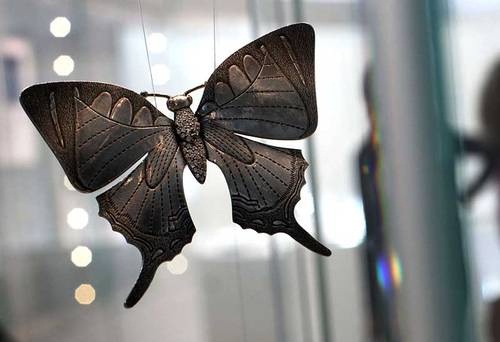 Butterfly pin, on display at the Museum of Arts and Design in September, 2009 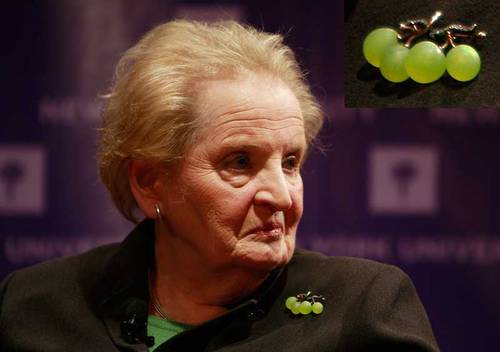 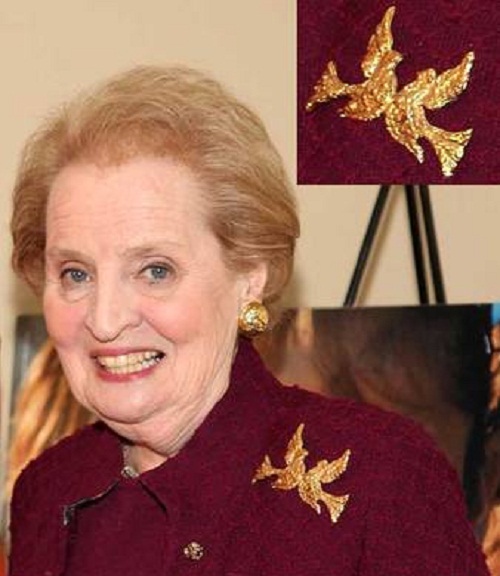 An event at the Kaye Playhouse at Hunter College, March 2009 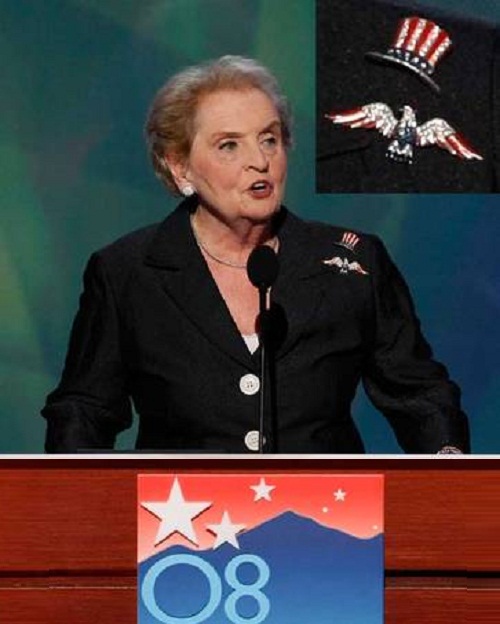 At the Democratic National Convention, 2008 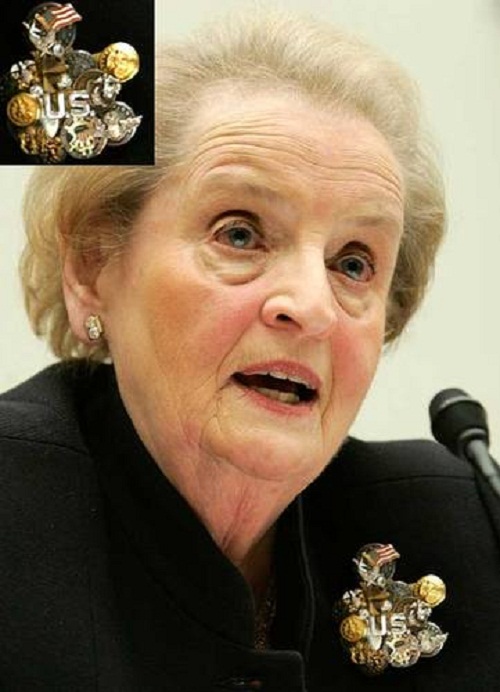 Testifying before the House Foreign Affairs Committee in January, 2007 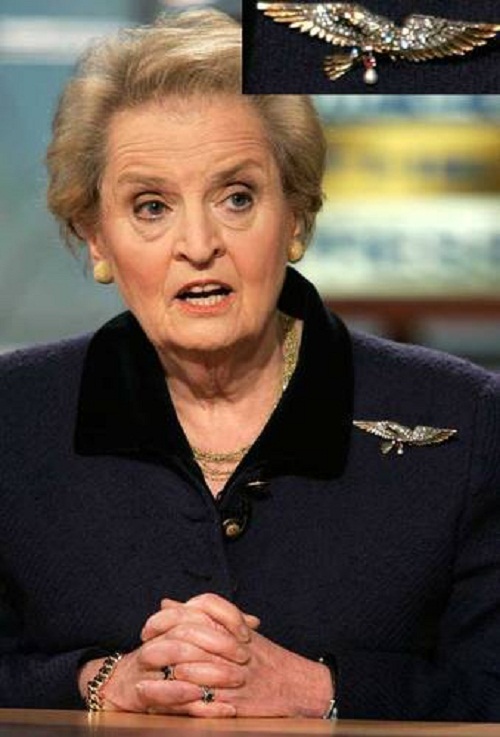 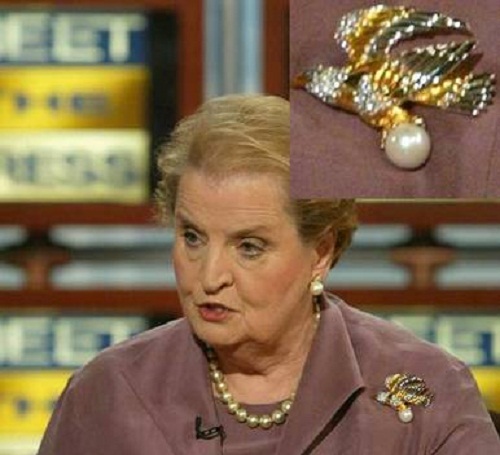 Jewelry lover Albright on ‘Meet the Press’ in 2005 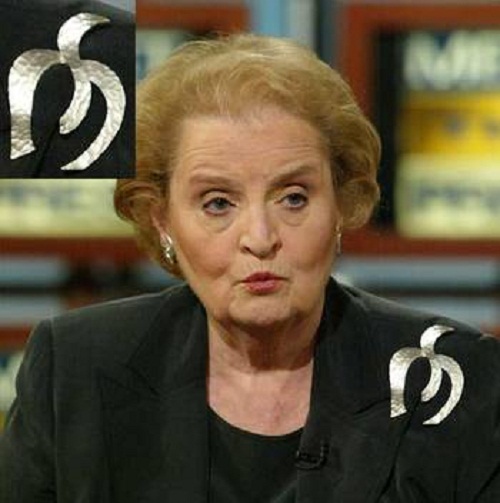 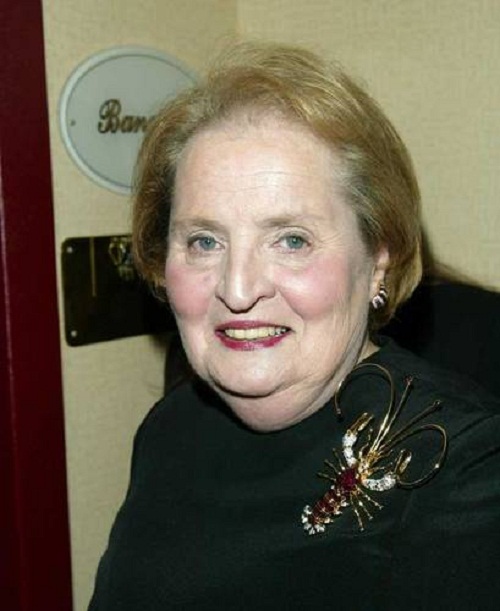 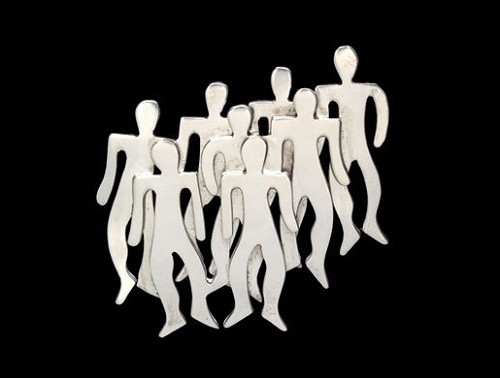 At the Group of Eight meetings, she was the only woman. She always wore this brooch in the form of a group of people without gender. Made ​​in Mexico, silver, 1960. 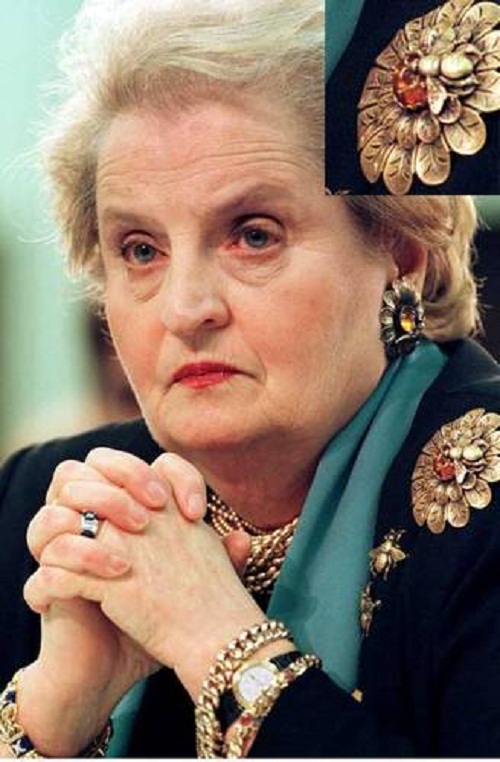 4-piece pin designed by Joseff of Hollywood in the 1940s. Three individual bees can be positioned to swarm around the focal flower-and-bee brooch. 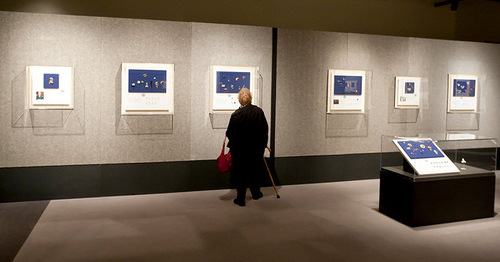 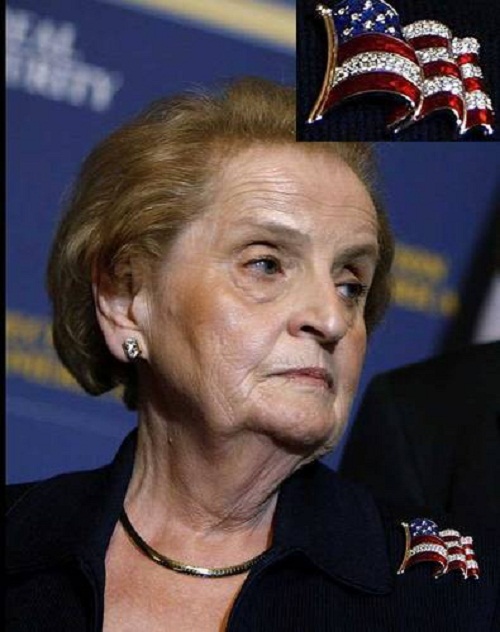