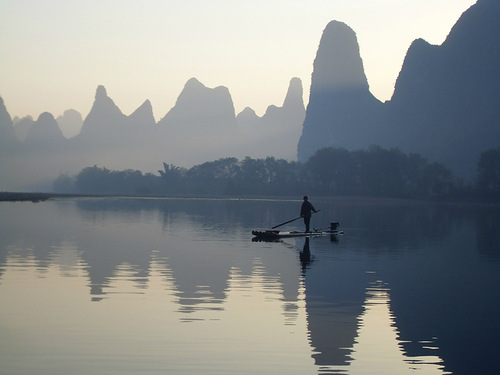 Picturesque River Lee
The Lijiang River encircling Guilin, River Lee, or simply – one of the cleanest rivers in China. It originates in the Mao’er Mountains in Xing’an County and flows in the general southern direction through Guilin, Yangshuo and Pingle. The beautiful river Lee is part of the Pearl River water system. River landscapes etched by many Chinese artists. Besides, its image is often placed on the cards. The mesmerizing beauty of these places once attracted the attention of not only travelers, but also Hollywood cinema. In particular, the river appears in the film “The Painted Veil” on Somerset Maugham’s novel “The Painted Veil”. 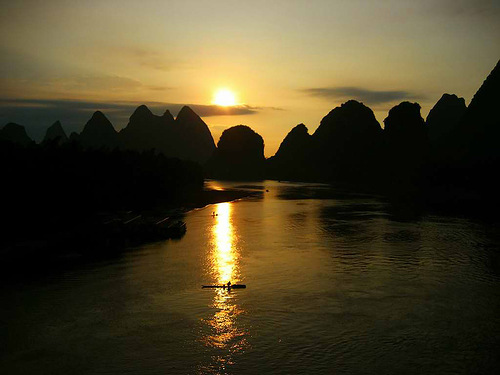 The Li River cruise from Guilin to Yangshuo is the centerpiece of any trip to northeastern Guangxi Province. Gorgeous Karst peaks give you surprises at each bend of the limpid river under the blue sky. Water buffalo patrol the fields, peasants reap rice paddies, school kids and fisherman float by on bamboo rafts. With its breathtaking scenery and taste of a life far removed from the concrete metropolis, the scenery along the river become one of China’s top tourist destinations. 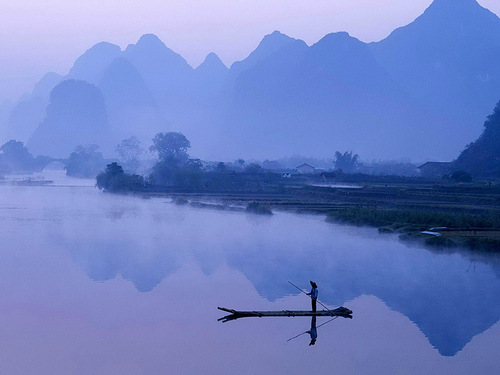 Blue evening at the River

The trip starts from the dock south of Liberation Bridge in Guilin downtown area. Otherwise some agencies will transport tourists to take a one-hour bus ride to the Bamboo River Dock (Zhujiang Dock) or the Millstone Hill Dock to start the cruise from its essential part. The river trip is over 83 kilometers (52 miles) long and is estimated to take four to five hours. 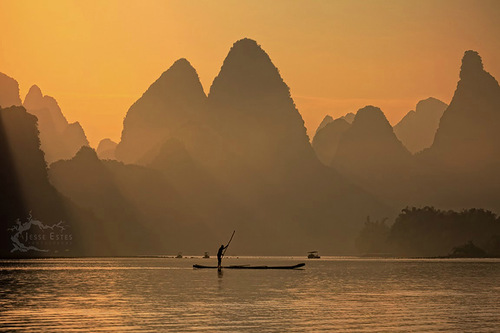 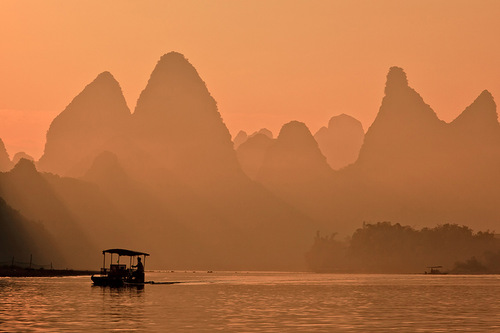 Mountains and River Lee in China

The river generally has three sections. Various attractions like peaks and villages along the river have interesting descriptive names, which calls for much of your imagination to see what it is like. Listening to tour guide’s legendary stories about the attractions is a delightful experience when you are appreciating the landscapes. Most are mystical fairy and love stories. The following Introduction to the attractions are presented in order of location along the river. 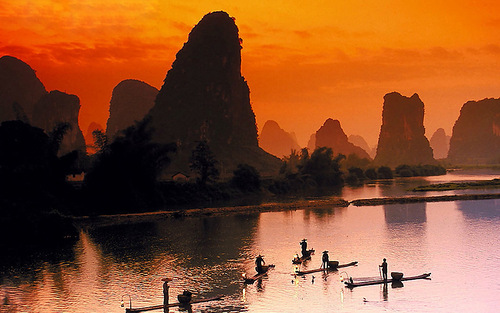 Landscape of the Lee in China 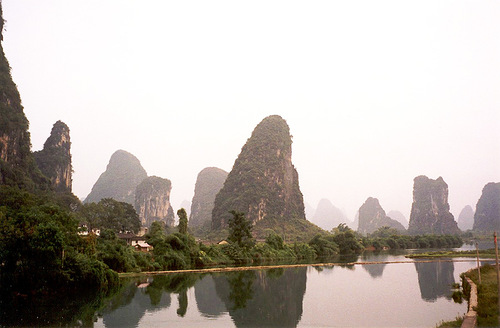 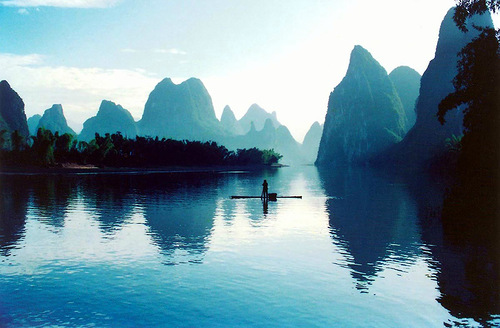 Magnificent view of the River Lee in China 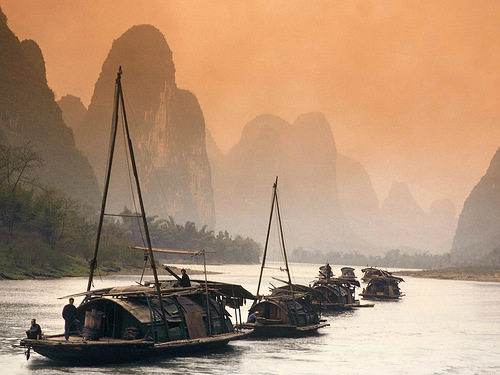 Boatmen on the River Lee in China 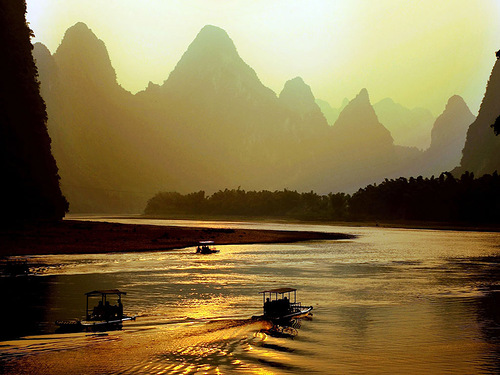 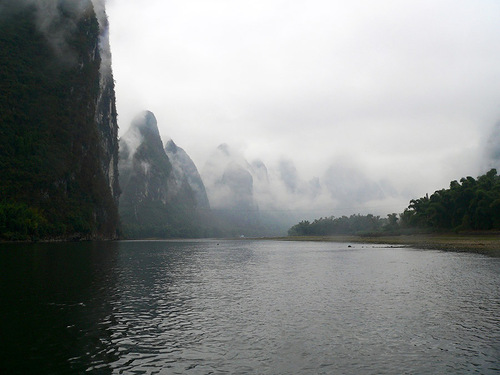 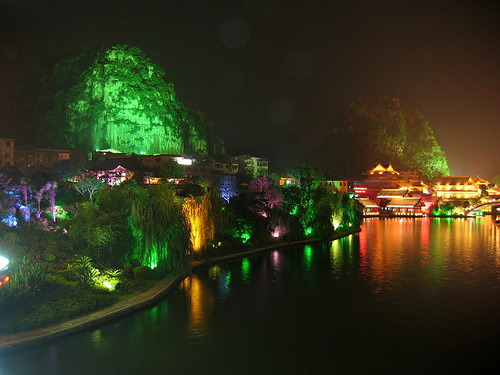 Night lights at the Lee 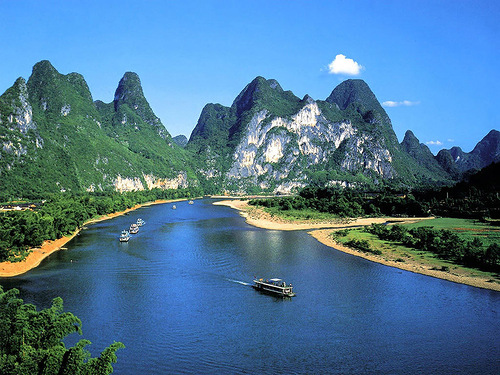 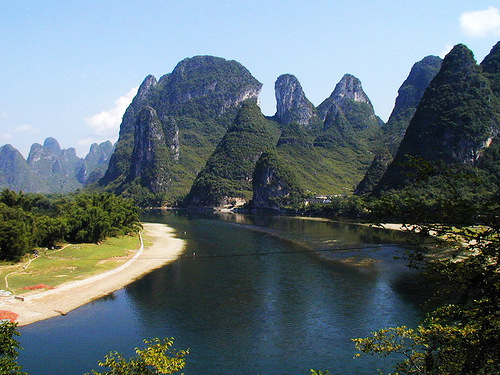 The Lee in China