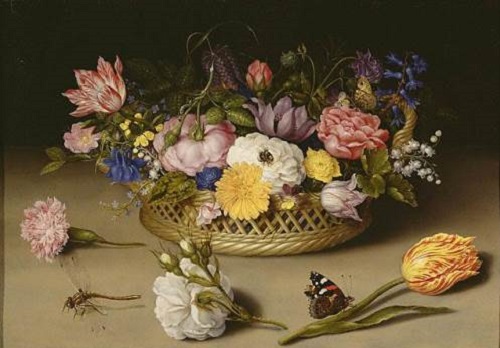 Still life painting secret signs. Admiring the colorful Still life, we often do not suspect the secret signs, which are hidden in these paintings (especially painted in the Middle Ages). What are these signs? Cut flowers in still life mean brevity and the ephemeral beauty of life, doomed with time to death. Dragonfly in the Middle Ages was considered one of the varieties of flies and its image had a negative meaning, embodying the devil. Butterfly, thanks to its ability to be released from the cocoon, was considered a symbol of salvation and rebirth. In contrast with dragonfly it points to the eternal struggle between good and evil. 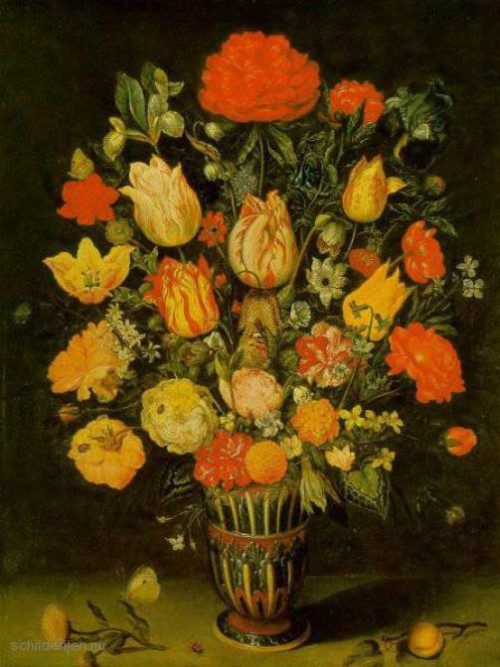 And in order to accurately portray flowers growing in different seasons on the same cloth, the artists had at their disposal florigeli – collections of images of flowers, made from botanical herbarium and popular in Europe since the end of the XVI century. 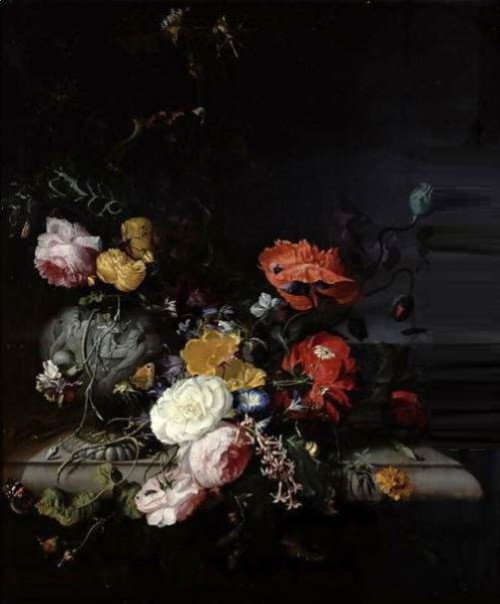 Images of different flowers have different meanings:
poppy – the flower of sleep and death,
hyacinth – a sign of mourning, and their combination with rose and carnation – symbol of love and life, the eternal cycle of life and death.

In the lower right part of the still life on a green leaf can be seen crawling snail, which can hide in its shell in a cold or dry season, only to get out of the shell into the light. Snail – a symbol of resurrection.
Fly crawling on one of the colors – the symbol of evil, opposed to the butterfly – a symbol of good and emblem of salvation and resurrection.
Two water deities on the vase, on the right – Triton and left – a river god. They remind us of the water as the source of life. 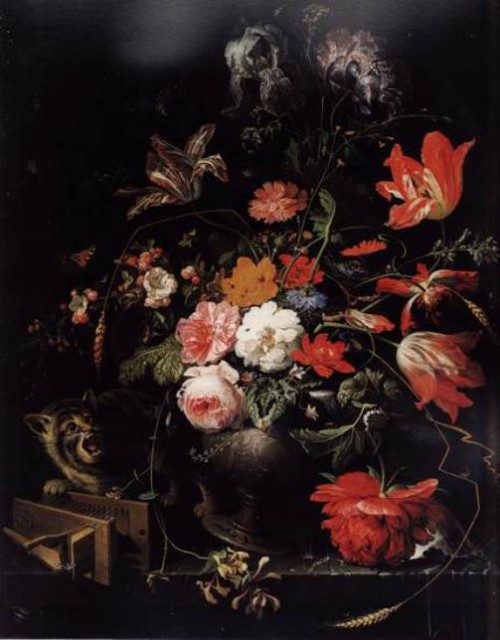 Image of a cat attacking a mouse trapped in a mousetrap – is a warning against the dangers that are hidden in romantic courtship. The cat on the canvas – a symbol of sensuality. The simultaneous combination of it and a vase of flowers, which upsets the cat, rushing for a mouse, should remind us of the trap lurking in the passion of love and carnal pleasures. 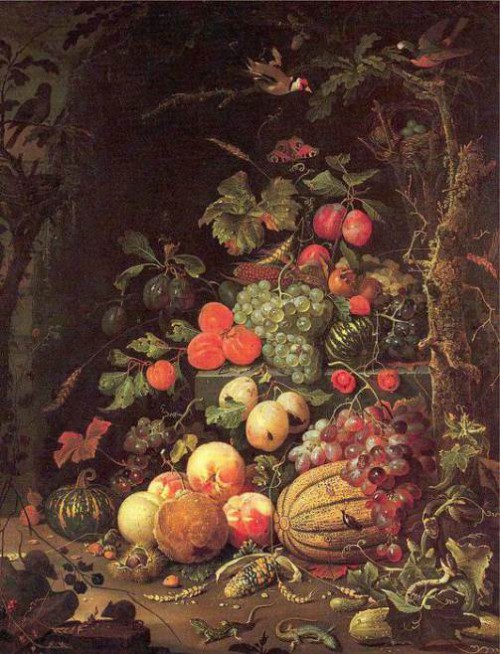 The image of lizards, insects – flies and dragonflies, has a negative value and represents evil (the devil). In conjunction with the butterfly shows the eternal struggle between good and evil.
Mouse (bottom left) – the symbol of the devil-eater that destroys the root of life.
Ears of wheat and grapes – known symbols of the Blessed Sacrament (Eucharistic), symbolizing the body and blood of Christ.
Goldfinch – a symbol of Passion and the symbol of the human soul.
Nest in the branches – a reflection of the biblical text: “And the bird finds a home, and the swallow a nest for herself, where she may lay her young” (Psalms). 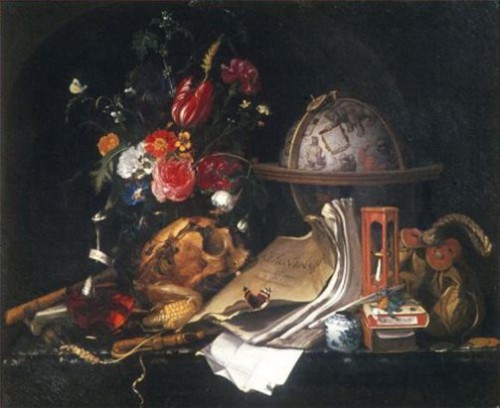 Still life painting secret signs:
To strengthen the sense of fragility of human life bouquets of flowers depicting a skull as a symbolic example of fuss were painted.
Butterfly with spread wings should remind us of the resurrection of the soul.
Flies – the evil forces that are in an eternal struggle with the forces of good.
Hourglass – another element of these paintings, reinforcing a sense of vanity and the transience of life. Hourglass measure off the passage of time, inexorably changing the material world.
Finally, in this picture on one of the pages of the book can be read: “We live to die and die to live.” And the inscription that has a deeper meaning than just a statement of fact of human life and death.

Many still life are the symbols of Christ, the Holy Communion (Eucharistic), symbol of the resurrection. 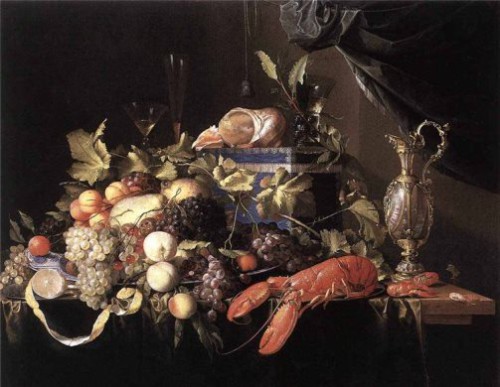 The variety of still life is not limited to floral arrangements and “Vanitas”, so let’s admire the more secret signs hidden in common – at first glance – the subjects. 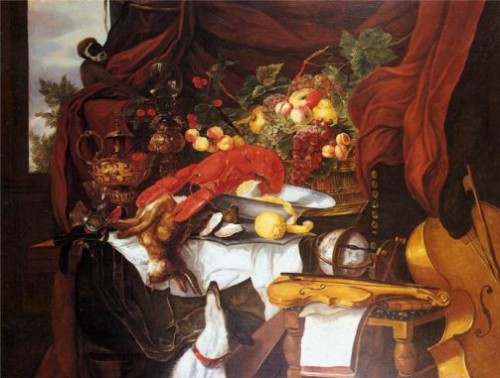 Monkey looking out from behind the curtain (in the upper left corner), should remind us of the devil. Monkey in almost all medieval paintings symbolizes evil, heresy, the devil.
Watch (left on the table beside the Cup) – a symbol of transience and ephemerality of all that is the luxury of this table.
Rock lobster – the resurrection and it highlights the bunches of grapes (carrying the Eucharistic meaning.)
Musical instruments further reinforce the religious message, signed in the composition. St. Augustine in his work “De Musica” (“About the Music”) states that the musical tone discernible to our ears, come from God – “the founder of all things.”
In general, the picture is a warning: people should not allow themselves to seduce luxury and wealth (ie, a table bursting with food), and must always remember the words and deeds of Christ, who died (grapes – Eucharistic symbol) and rose (rock lobster – symbol of resurrection) to save the human race. 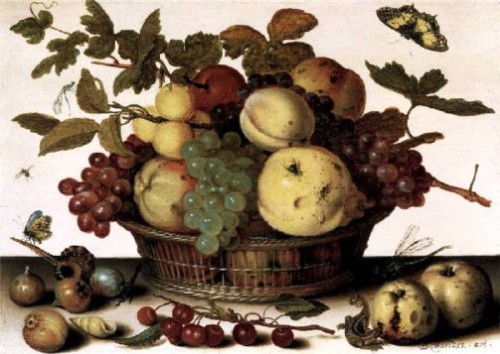 Lizard, like flies, dragonflies – symbols of evil.
Butterfly – a symbol of resurrection and salvation, is in a constant struggle between good and evil.
Bunches of grapes – the symbols of the Holy Communion (Eucharistic).
Signs of damage on the fruit should remind us of the futility and transience of all earthly things.
Image of fruit basket reflects the adage: “First is maturing, and then rot,” and refers to the biblical book of the prophet Amos (8:1), in which God calls a prophet to see a basket of ripe fruit as an omen of the end. 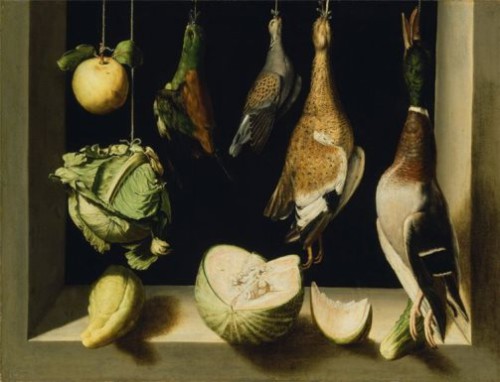 Precious wildfowl was in the Middle Ages preferred food of the upper classes and the synonym of economic well-being. The painted prey contrasted the simplicity of gifts of land: greens, vegetables and fruits. Such opposition should remind us of the futility of luxury and insecurity of human existence.
Such a serial arrangement of plant and animal products should be attributed to the medieval concept of beauty as that in the Book of Wisdom (11:21): “But you placed all things in measure and number and weight.” 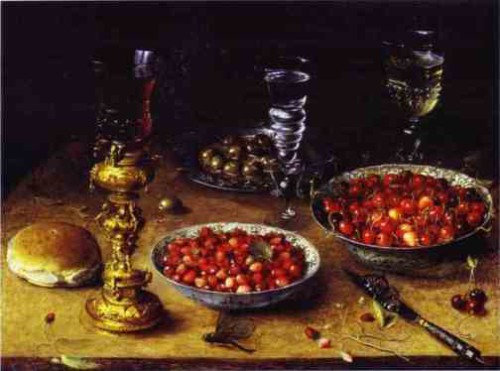 Still life painting secret signs:
Cup filled with wine is the blood of Christ, who died to atone for the sins of men.
Bread – a symbol of the body of Christ (Eucharistic meaning.)
Considered type of dragonfly is an emblem of the devil and evil.
Butterfly – a symbol of resurrection, and contrasted the dragonfly reflects the eternal struggle between good and evil.
Cherry should remind us of the Passion of Christ.
Strawberry refers to the image of paradise. 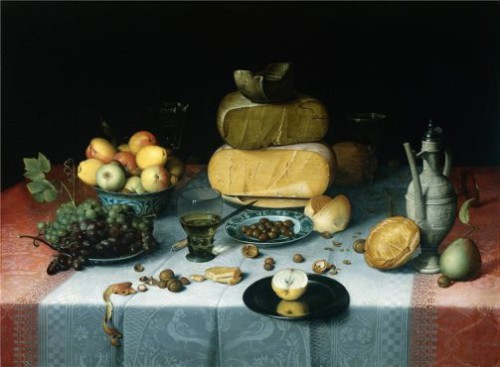 Floris van Dyck “The table set with cheese and fruit,” about 1615

Still life painting secret signs:
A glass of wine – the symbol of the blood of Christ, a reminder of the Last Supper.
Bunches of grapes – Eucharistic meaning.
Apple should remind us of the original sin of man.
Bread – a symbol of the body of Christ (Eucharistic meaning.)
Cheese (for the Protestant religion) was the food permitted during Lent.
Walnut, according to St. Augustine – is the image of Christ. According to this interpretation, walnut peel – the flesh, the shell of the wood – the symbol of the cross, and the nucleus suggests to us the divine nature of Christ. 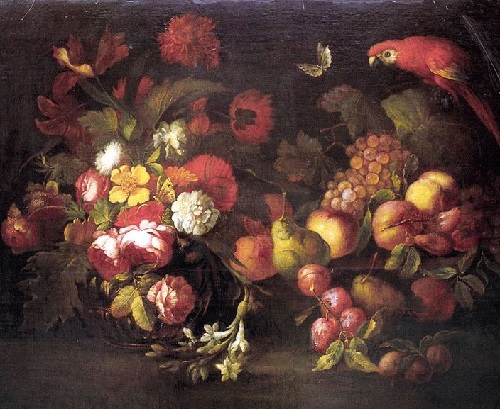 Of course, in addition to reminding us of the frailty and transience of life, the variety of colors in still life represented a purely botanical interest.