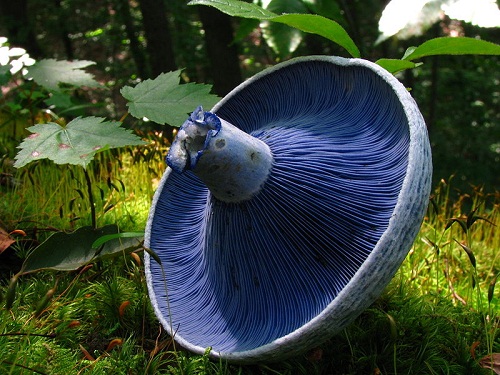 World most beautiful mushrooms
Mushrooms are members of a huge group of organisms that includes microorganisms such as yeasts and molds. Mushrooms is the whole kingdom, separate from plants, animals and bacteria. Fungi play an important role in the decomposition of organic matter, as well as in the food chain. In the world there are between 1.5 and 5 million species of fungi. Below you will find the most beautiful and interesting of them. In the above photo – Mlechnik blue (Lactarius indigo). Fairly common type of fungus grows in the eastern part of North America, East Asia and Central America. It grows on the ground in both deciduous and coniferous forests. The color varies from dark blue in fresh mushrooms to a pale blue-gray of old. Milk, which highlights the fungus if it is cut or broken, is blue. Cap is 5-15 cm, leg – 2-8 cm in height and 1-2.5 cm in thickness. Edible mushroom are sold in rural markets in Mexico, Guatemala and China. 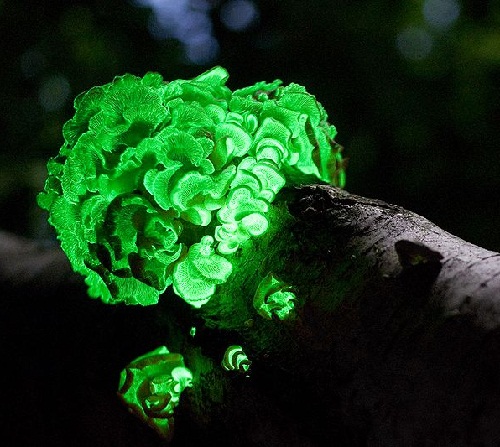 Panellus stipticus, growing in Asia, Australia, Europe and North America. It grows in groups on logs, stumps and trunks of deciduous trees, especially on oaks, beeches and birches. This is one of the bio-luminescent mushroom species. 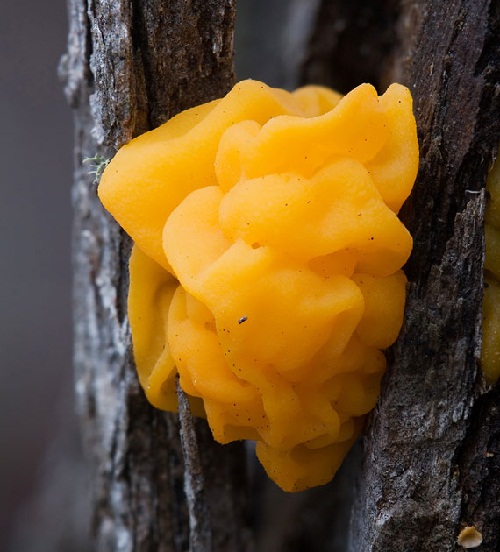 Orange Tremella mesenterica. This fungus usually grows on dead trees, but also on the newly fallen branches. Gelatinous orange-yellow body of the fungus (up to 7.5 cm in diameter) has a winding surface, which in the rain becomes sticky and slippery. The fungus grows in the cracks of the bark, appearing in the rain. After several days of rain it dries and turns into a wrinkled mass capable to regenerate after rain. This fungus is commonly found in mixed forests and distributed in temperate and tropical regions, including Africa, Asia, Australia, Europe, North and South America. Mushroom is edible, although it is considered tasteless. This fungus produces carbohydrates that have value for research. 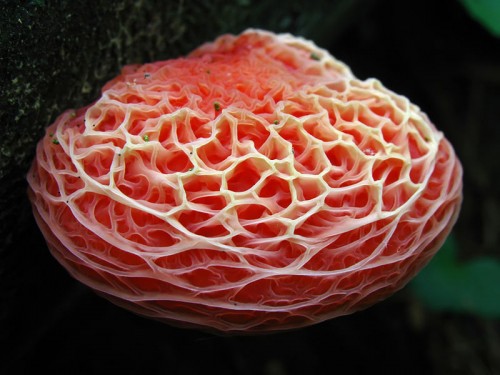 Rodotus (Rhodotus palmatus). This fungus – the only member of the genus in the family Physalacriaceae. The fungus can be picked up in eastern North America, North Africa, Europe and Asia. In Europe, the number of fungi is falling rapidly, so it is included in the Red book. Usually grows on decaying logs and stumps of trees. Mature mushrooms differ with pinkish color and has “vien-like” surface. 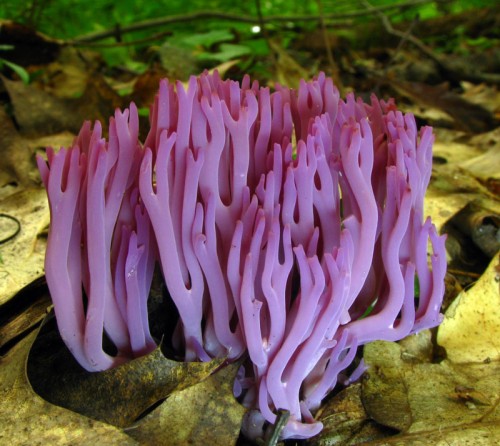 Pale brown Clavaria zollingeri. Widespread species of fungi. It has a tube-shaped purple or pinkish-lavender body, growing to 10 inches tall and 7 inches wide. The tips of the fragile and thin branches usually rounded and brownish. It absorbs nutrients by breaking down organic matter. Usually grows on the ground. 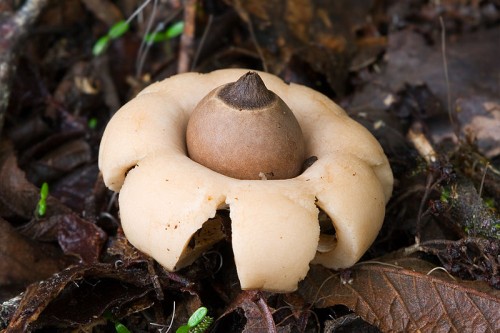 Geastrum saccatum grows in North America and Europe on rotting trees. Mushroom pickers find it inedible due to its roller coaster of taste. Fairly common type, is picked at the end of the summer. It is believed that the hole on the outer layer of the body has a star-shaped mushroom. In Brazil, the fungus is called “Star of the earth”. 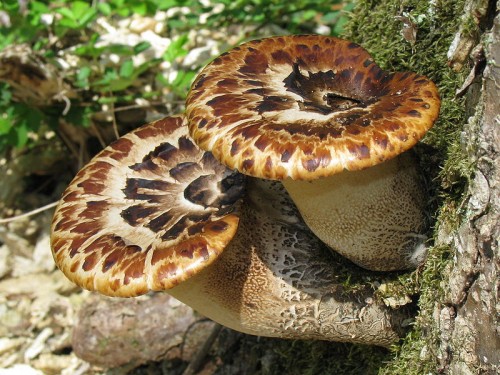 Polyporus squamosus. Widespread species of fungus growing in North America, Australia, Asia and Europe. Alternative name of the fungus – the seat of Dryads – refers to the Greek mythology and the Dryads, who supposedly could ride these mushrooms. 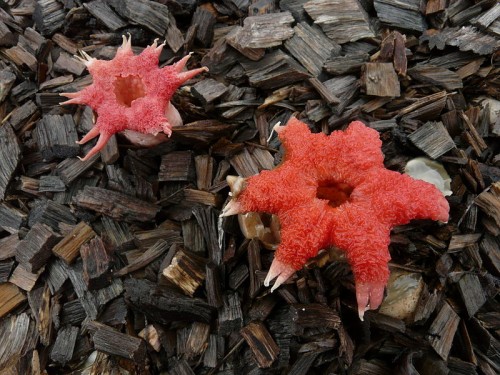 Aseroe rubra. The so-called sea anemone is widely recognizable due to its unpleasant smell of rot and starfish shape. Growing in the gardens of the forest floor and in the grassy areas, like the red star, covered with brownish mucus, and has a white leg. Attracts flies. 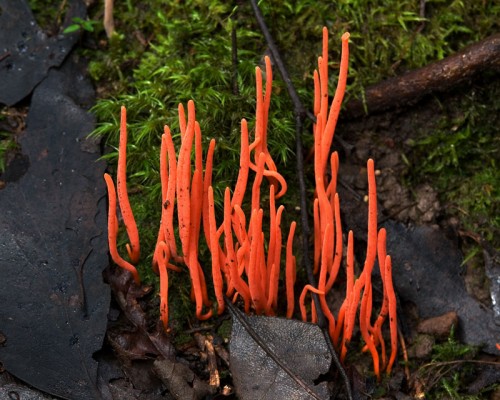 Coral mushroom (Clavulinopsis corallinorosacea). The fungus is called so because of the similarity with sea corals. These mushrooms have a bright color, mostly orange, yellow or red. Coral saprotrophic fungi are symbiotic and parasitic. 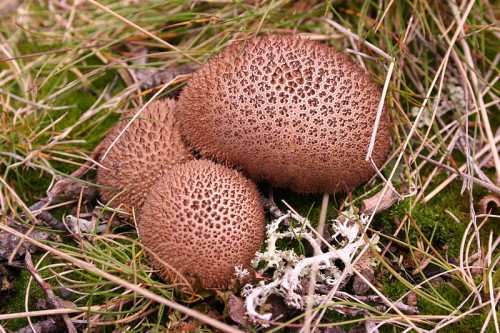 Brown raincoat (Lycoperdon umbrinum). This type of fungus is growing in China, Europe and North America. These mushrooms have an open cap with spores. Instead, the arguments appear inside the body of the ball. 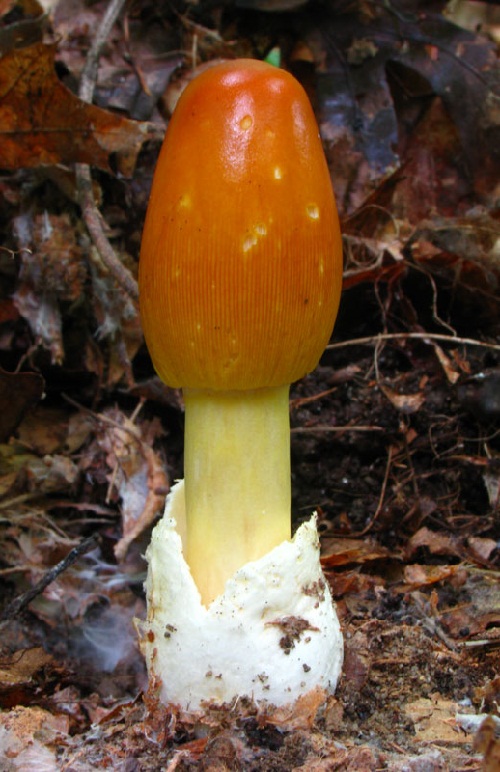 Amanita caesarea. Very valuable edible fungus, which grows in southern Europe and North America. For the first time this fungus is described by Giovanni Antonio Scopoli in 1772. It was loved by the rulers of the Roman Empire. It has a distinctive orange cap, yellow spore-bearing plate and the leg. This fungus is very much appreciated by the Romans, who called it Boletus. 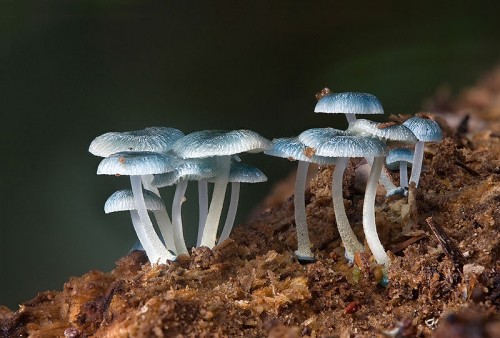 Mycena interrupta. This fungus grows in Australia, New Zealand, Chile and New Caledonia. In Australia, grows in Victoria, Tasmania, New South Wales and South Australia, and in Queensland, but only at The National Park Lamington. Pileus is 0.6-2 cm, and they have a bright blue color. When they appear, they have a spherical shape, but maturing it becomes wider. Hats are sticky and slimy-looking, especially in the rain. 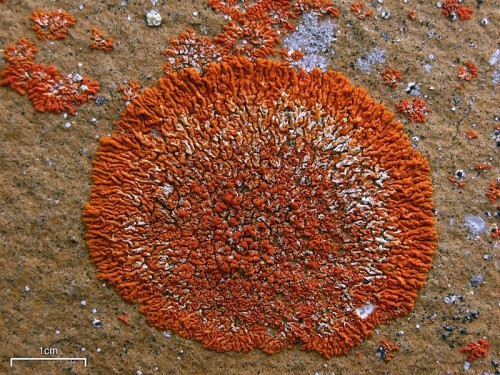 Xanthoria elegans. This fungus grows on rocks, often near the bird perches or mink rodents. By the nature of this lichen. It became one of the first lichens used in the method of dating rock surfaces, known as lihenometriya. Growing at a rate of 0.5 mm per year during the first century, and then the groth a little slows. 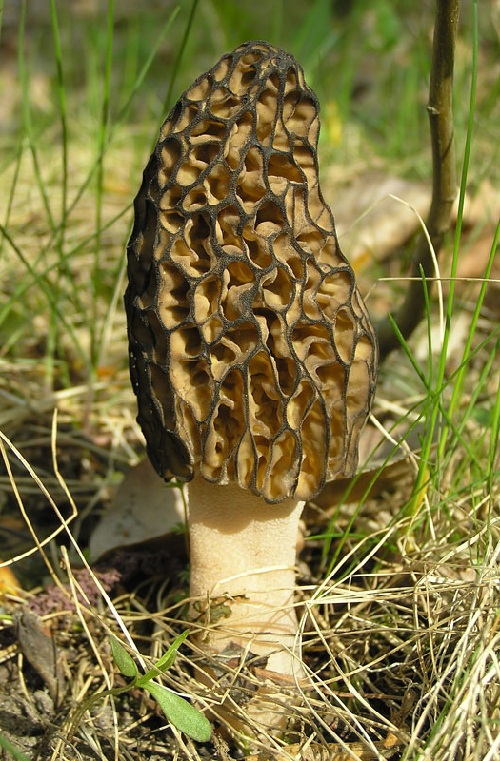 Conic morel (Morchella conica). Edible mushroom in the upper part resembling a honeycomb. It consists of a network of undulated strips with voids therebetween. Very appreciated by gourmets, especially in French cuisine. The fungus is very popular with mushroom hunters not only from a commercial point of view, but also because of the pleasant taste. 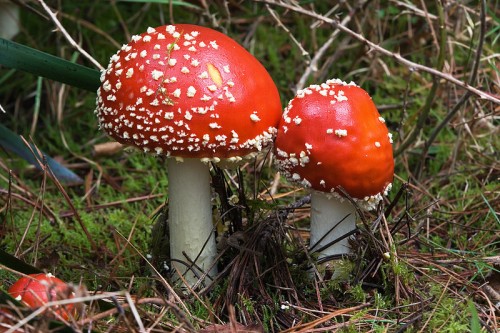 Red fly agaric (Amanita muscaria). All known amanita – poisonous and psychoactive fungus. It grows in the Northern Hemisphere, but also was introduced in the country of the southern hemisphere, first as a symbiont in the coniferous forests, and later as a full species. Red hat with white dots – it is one of the most recognizable of fungi in the world. Although it is considered poisonous, Amanita muscaria was confirmed of not being poisonous, and in some parts of Europe, Asia and North America, it is eaten after blanching. Amanita has hallucinogenic properties, its main psychoactive component – muscimol. Some peoples of Siberia are using it as an entheogen, and it has a great religious significance in these cultures.