At the beginning of the XX century headlines and Announcement posts in European media were full of advertisements about performances of unique vaudeville actresses – Daisy and Violet Hilton. These beautiful and definitely talented English girls were Siamese twins, or conjoined twins, and spent a lifetime together. Meanwhile, this sad and not vaudevillian story has everything: love, betrayal, and the world of glamour and intrigue. 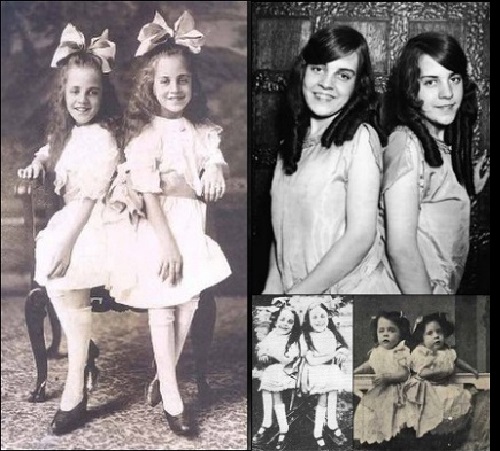 On the stage since childhood. Chained for life Daisy and Violet Hilton

Born in Brighton, UK in 1908, Daisy and Violet Hilton were a shock to everyone. Their mother, Kate Skinner was not married, and worked as a waitress at the pub. The birth of the girls, Siamese twins, conjoined in the area of hips and buttocks. 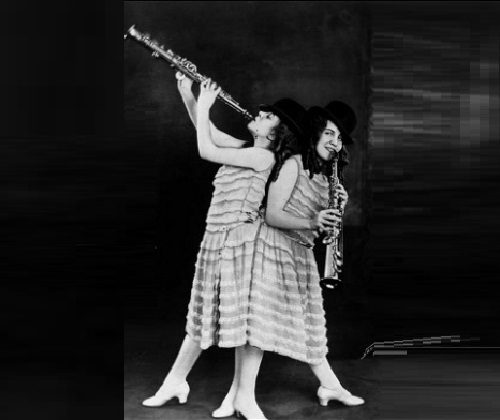 However, the only person who was not in shock – the owner of the pub, Mary Hilton, who even was present at the birth. She immediately realized how attractive for investment may be these girls, and bought the strange babies from their mother, who was not eager to bring up her children alone.

So, the trustee has given her name to children. First babies lived in the pub «Queen’s Head», and later they moved to the pub «Evening Star». The girls started performing before the audience since the 3 years of age. They were taught to dance, music, and sisters honed skills on the stage at carnivals and fairs, where they had to act. Contemporaries told that the Hiltons were too strict to the girls, and severely punished them for any fault.

It is known that members of the Sussex medical and surgical societies considered the possibility of separating conjoined twins, but it turned out that the girls shared a circulatory system, so the operation would lead to the death of one of the girls.

As time went on, the sisters grew up and eventually turned into a comely young women, who also sang and danced beautifully. The people went to their shows so willingly that caregivers earned good money on them. When their trustee died, her daughter continued earning money on the twin sisters. The earned money allowed her to buy a house in San Antonio, Texas in the 1930s. But in 1931, Daisy and Violette had the courage to get rid of the “cage”, and went to court, demanding liberty. As a result, they received $ 100,000 for moral damages and coveted freedom.

Having become free, Daisy and Violet opened their own vaudeville «The Hilton Sisters Revue». Their life has changed significantly. Daisy became blonde, girls began to dress differently, to feel themselves different personalities.

The sisters had several love affairs. Violet even engaged to Maurice Lambert, but young people couldn’t get permission to marry. Daisy married to actor Harold Hester, but their marriage was canceled a few days later. It is rumored that one of the sisters had a baby, and she gave him away for adoption.

The sisters claimed that in love affairs they did not disturb each other. Ostensibly Houdini with whom the girls were friends, taught them to have a private mental space where they could “get rid of each other,” when it was necessary. They had a special, like a phone, booth, where one could share tenderness with her chosen one, while the other was reading or doing manicures.

In 1932, Daisy and Violet appeared in the film ‘Freaks’, and another film starring Daisy and Violetta was in 1951 ‘Chained for Life’, which just shows the real life story of the Hilton sisters.
As time passed, savings of the girls who lead glamorous life, came to an end. Vaudeville at the time went out of fashion. But except entertainment, the girls did not know where to apply their talents, they were still trying to sell themselves in this field. As a result, they got into a burlesque show, and went on tour.

In 1941, Terry Turner, PR-manager of the twins, widely publicized information about the wedding of Violet and the dancer James “Jim” Moore. However, the wedding was nothing more than a farce. Jim was a homosexual, and their marriage lasted only two weeks.

In 1955, when it became clear that the theatrical career was over, the sisters opened a bakery, which served hot dogs, but their competitors accused them of stealing their business. After that, the sisters got a job of sellers of chips in a small town called Charlotte, where they modestly lived the rest of their life. According to the memoirs, the twins always looked perfectly: they had perfect hairstyles, makeup and manicure.

In January 1969, after the sisters did not come to work and did not respond to phone calls, to their home police arrived. They found the women dead. Doctors announced the cause of death raged Hong Kong flu, and found that the first Daisy died, and Violette lived another 2 to 4 days. Hilton twins are buried in the Forest Lawn West Cemetery.

Later, about the life of the Hilton sisters was staged the musical on Broadway «Side Show», which immediately received four nominations of award “Tony,” and in their native Brighton in their honor was called the number 708 bus. 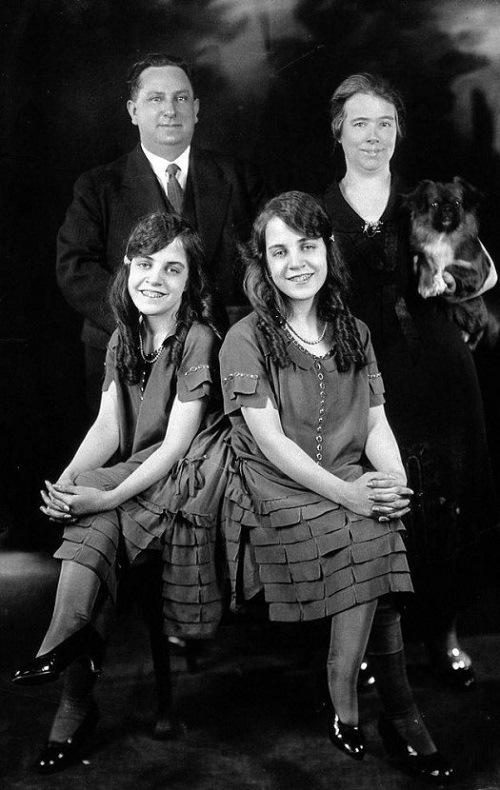 1927 photo of Daisy and Violet Hilton with the Meyers 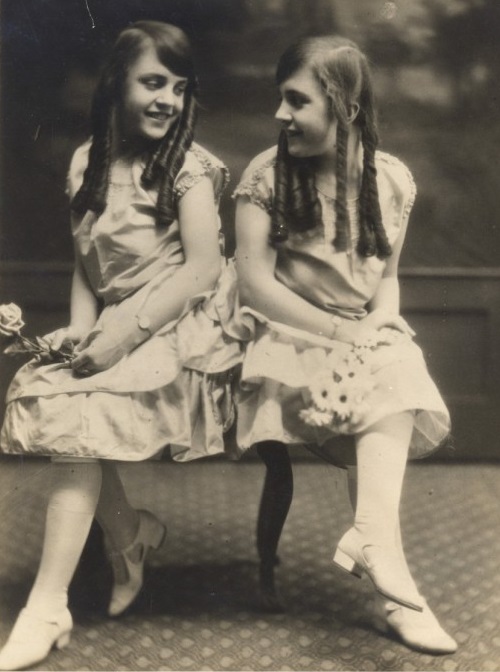 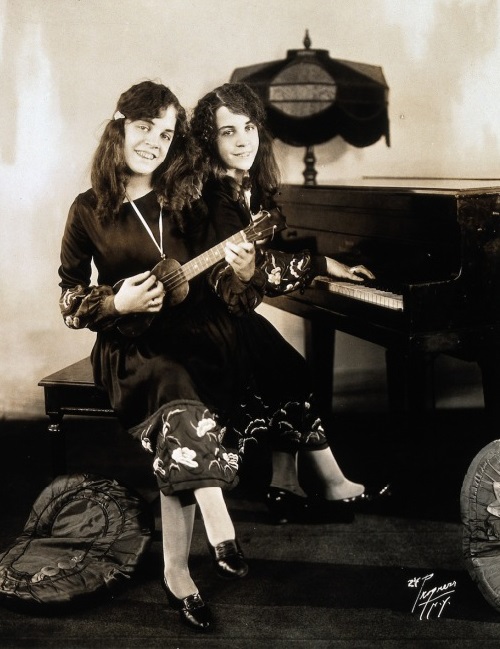 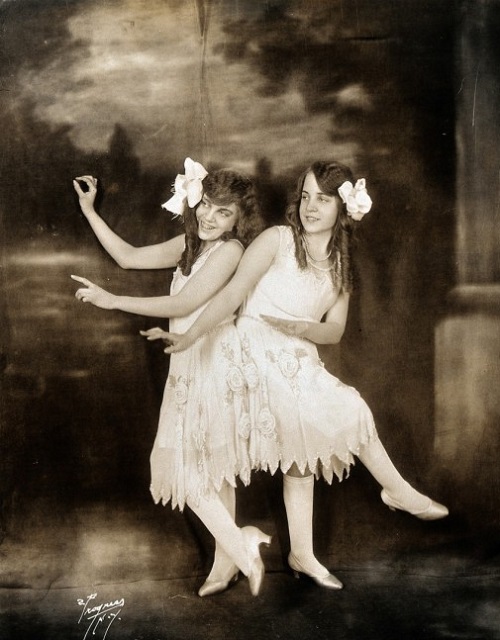 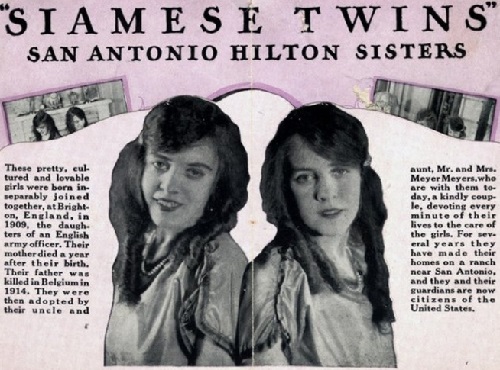 A newspaper article about the unusual actresses 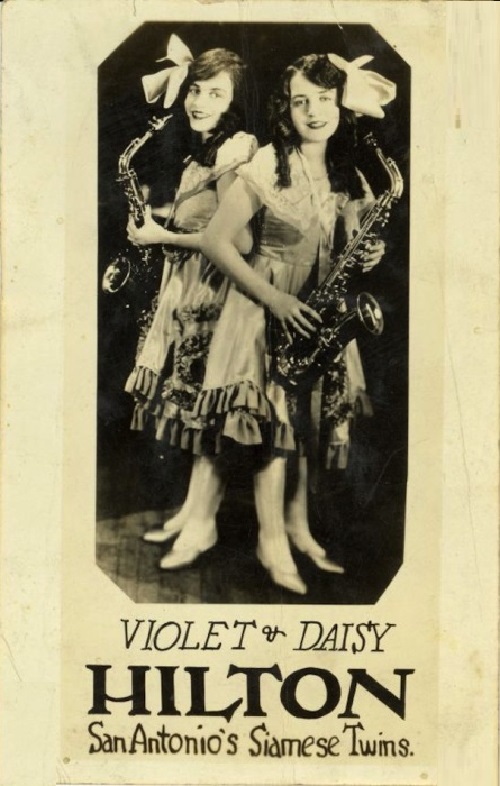 Poster on performances of the Hilton sisters 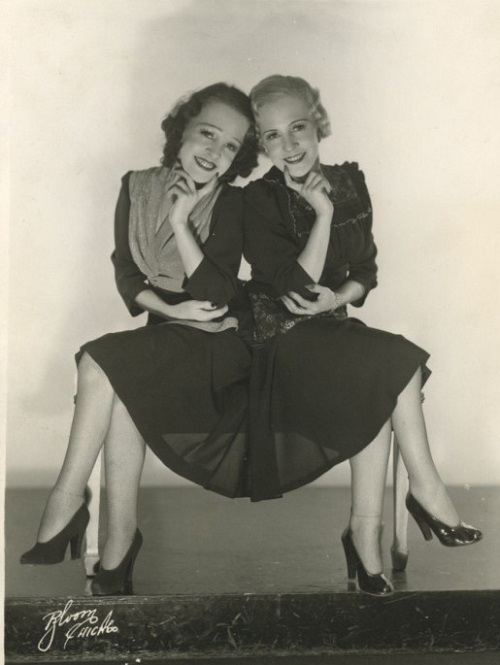 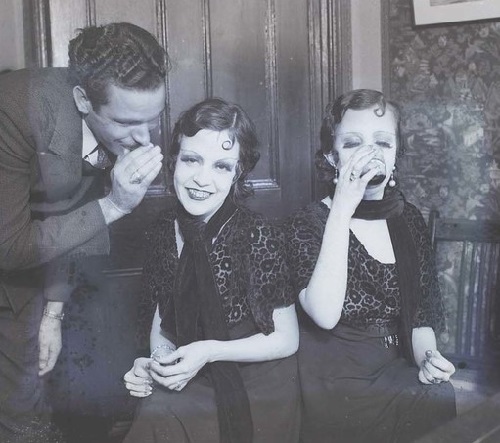 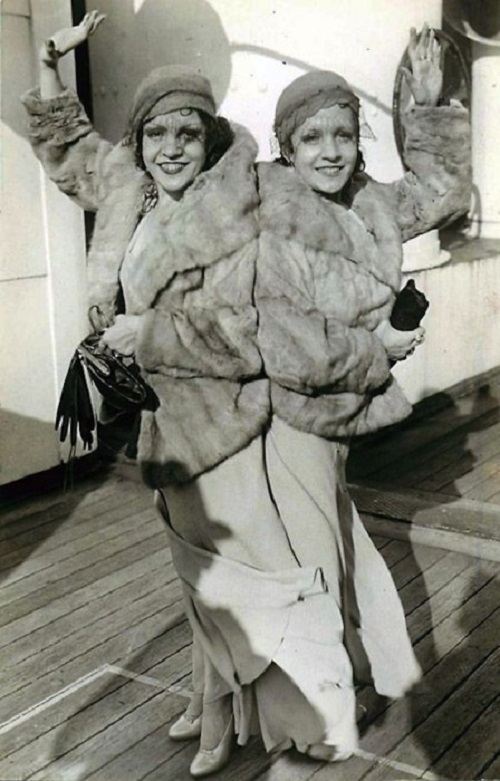 In greeting gesture, Daisy and Violet 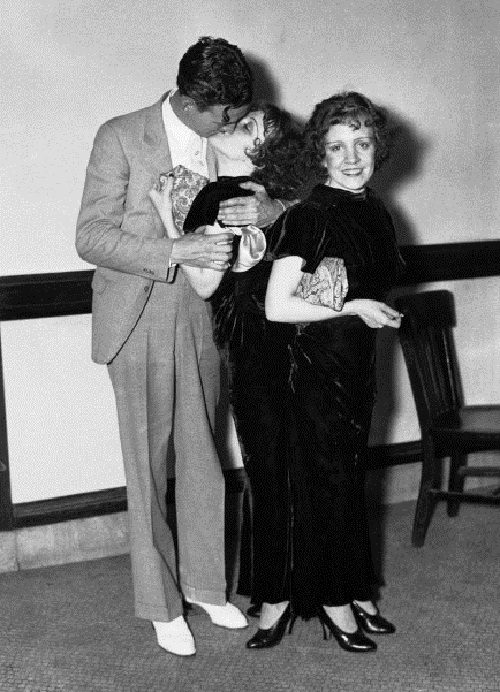 On a romantic date always with the sister 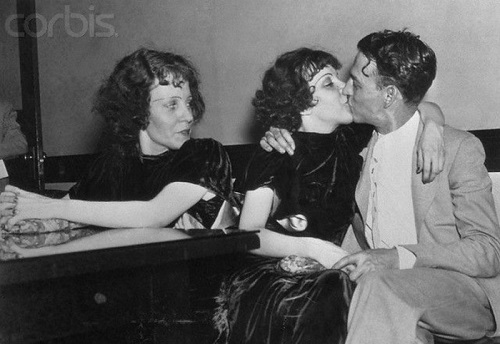 Even on a romantic date always with the sister 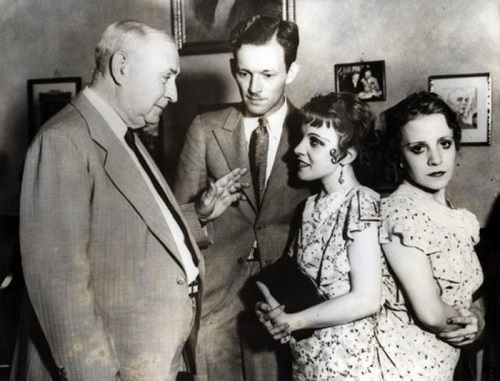 The official explains Violette and her boyfriend, that the marriage can not be registered 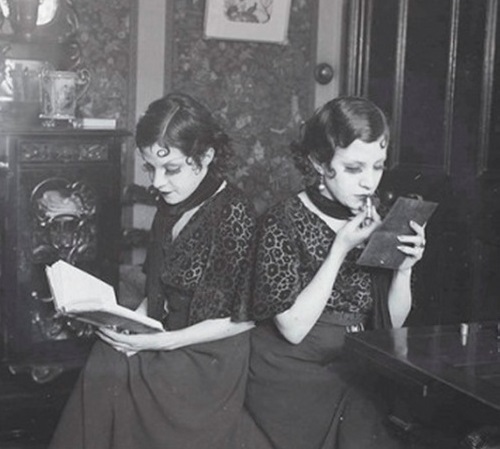 Everyone is busy with her business 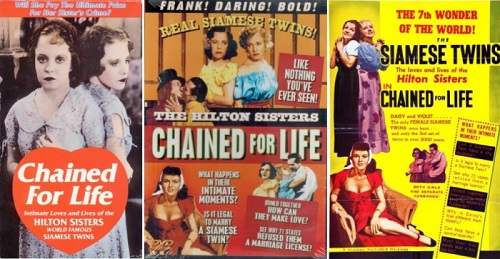 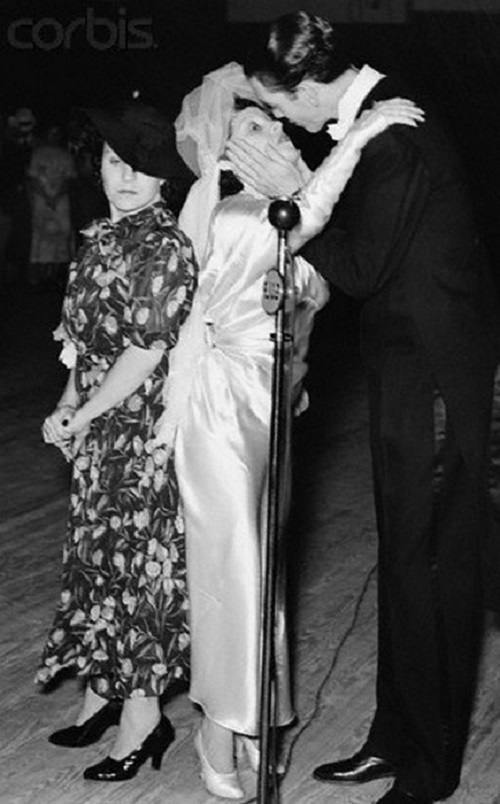 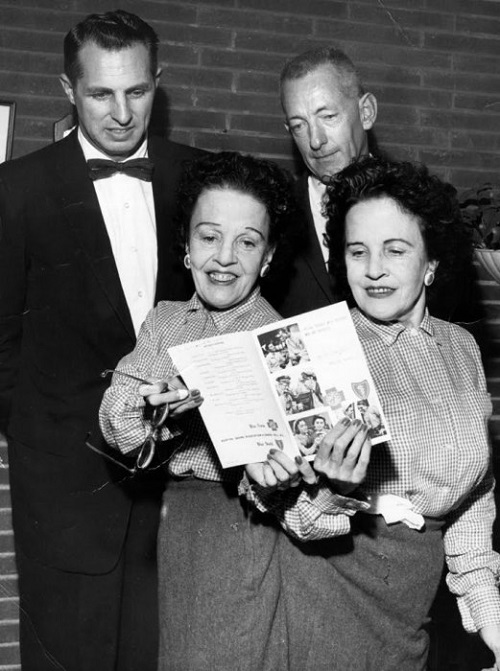 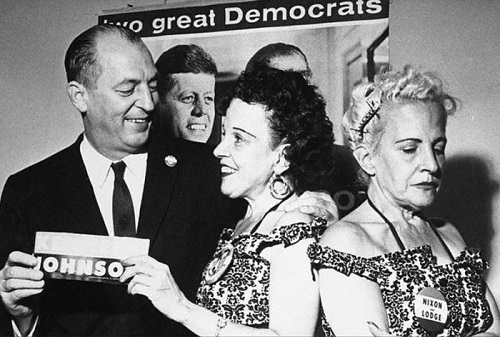 Late photographs of Daisy and Violet 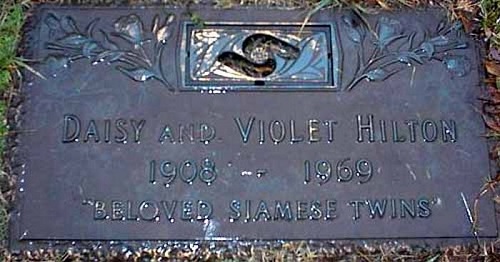