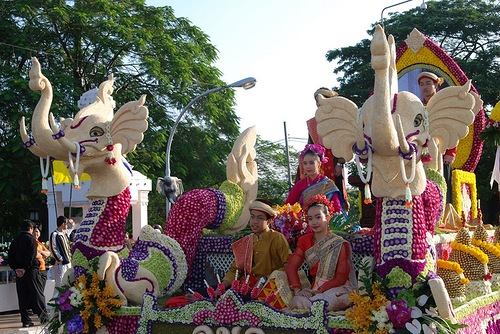 Chiang Mai Flower Festival
Traditionally, in early February, when the Chiang Mai Flower Festival exhibitions open, Thailand itself literally blooms. The flower beds in public gardens and other places are especially beautiful at this time of year. Thousands of Tourists admire displays of yellow and white chrysanthemums, and the Damask Rose, a variety found only in Chiang Mai. Also, the pink and purple Dendrobium orchids, and the lovely yellow Daoruang. However, the real focus of this Chiang Mai festival is the public garden of Suan Buak Haad on the south-western corner of the moat. The police close off the road next to the moat all around the park, and allow vendors of plants, Thailand flowers, orchids and garden decorations to set up their stalls.
Traditionally, the Flower Festival completely transforms the park, with special displays of flowers, miniature trees and the famous local orchids. Of course, all set out for the judges to choose the best of each species. 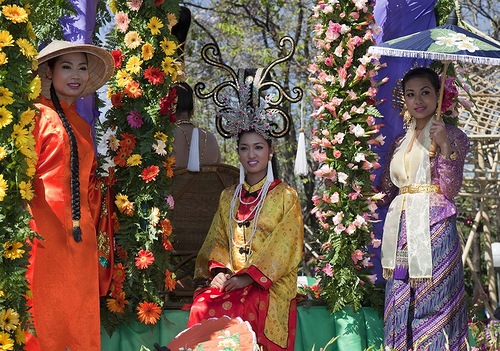 Beautiful tradition of Chiang Mai Festival of Flowers in Thailand

Also, there are displays by landscape specialists, featuring waterfalls, patios and various schemes of garden decoration. In addition, there are stands representing gardens from neighboring countries, and stands selling local products.. 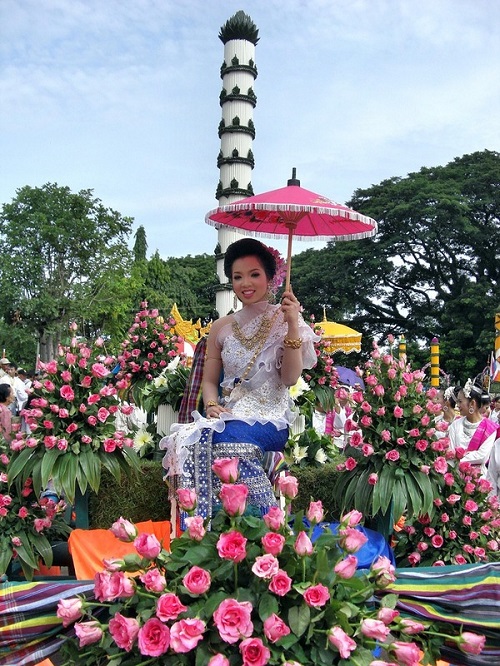 Meanwhile, the Flower Festival Parade starts on Saturday morning. Thus, the parade lines up along Charoen Muang Road, all the way up from the Nawarat Bridge to the train station. At 8am the parade begins to move. After passing the viewing stand the parade moves up Tha Pae Road to Tha Pae Gate and then turns left and follows the moat round to Suan Buak Haad. 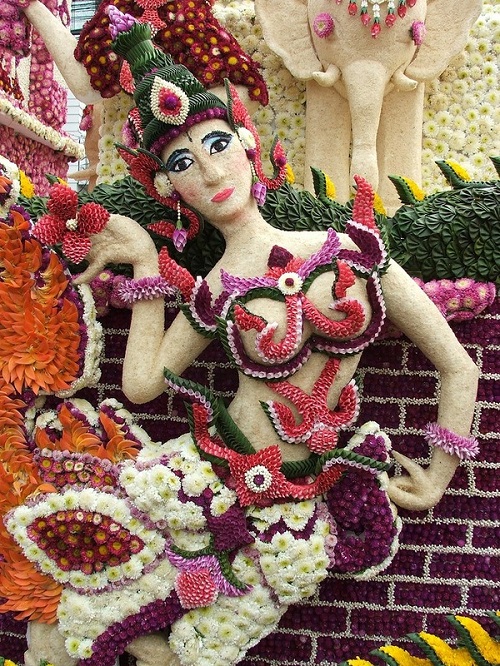 The parade moves very slowly, and stops frequently, so there is plenty of opportunity to take photographs of the gaily decorated floats. As well as pretty girls, and colorful hill tribe people in their costumes.

At these stops dancers in traditional costumes perform Thai dances. Those taking part in the parade hand out roses to the spectators lining the road. 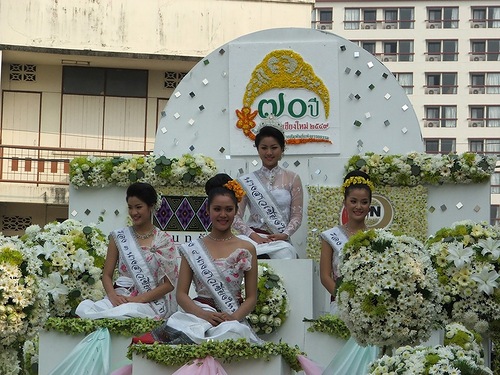 Most of the girls perched on top of the gaily decorated floats and carriages are candidates for the Miss Chiang Mai Flower Festival competition. Loud rock music and a copious supply of beer help in the deliberations. The party goes on well into the evening until the Flower Festival Queen is chosen.

The atmosphere here is relaxed and cheerful, and at this time of the year the nights are still cool and breezy, making for a very pleasant ambiance. 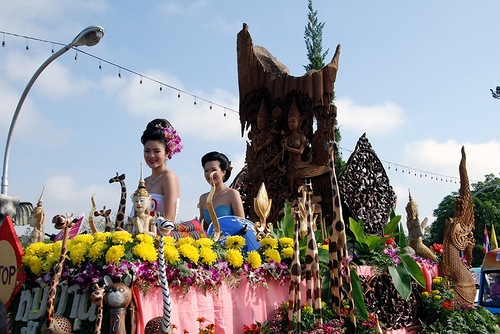 Those coming to Chiang Mai for the Flower Festival can also combine this popular spectacle with a visit to other places of horticultural interest. 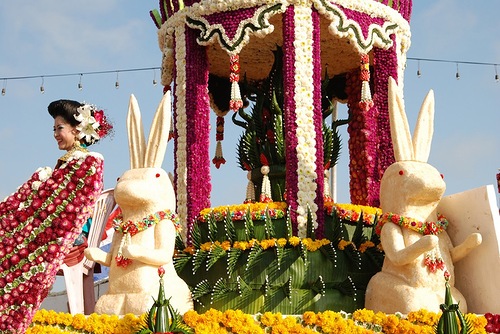 Work of landscape designers and florists 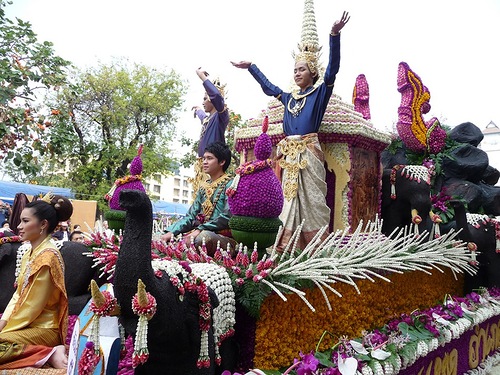 During the procession at Chiang Mai Festival of Flowers in Thailand 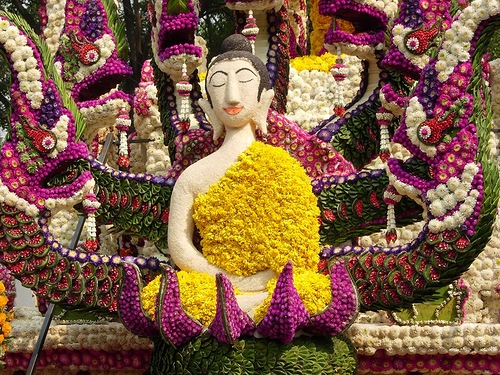 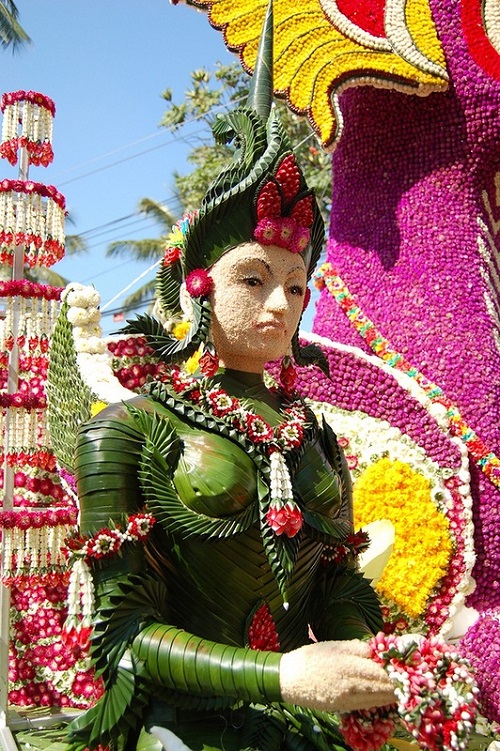 Creative and artful Chiang Mai Festival of Flowers in Thailand 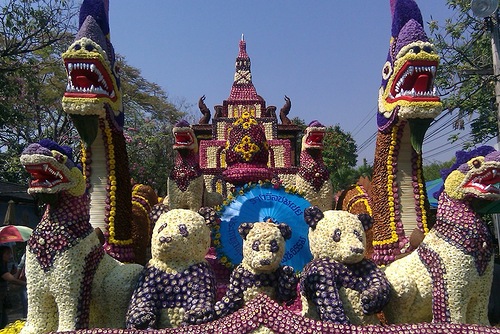 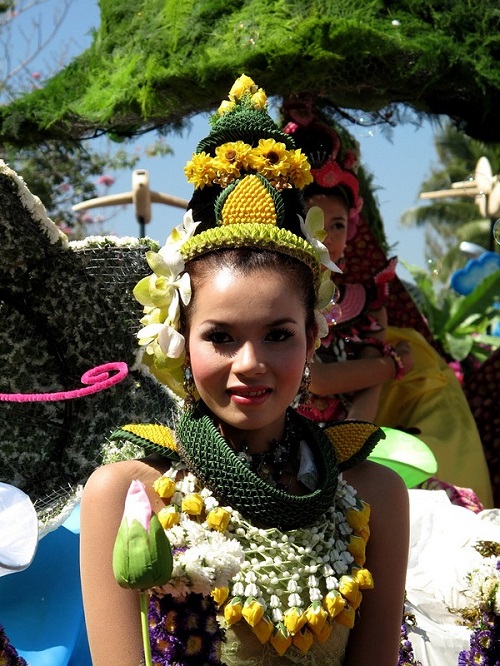 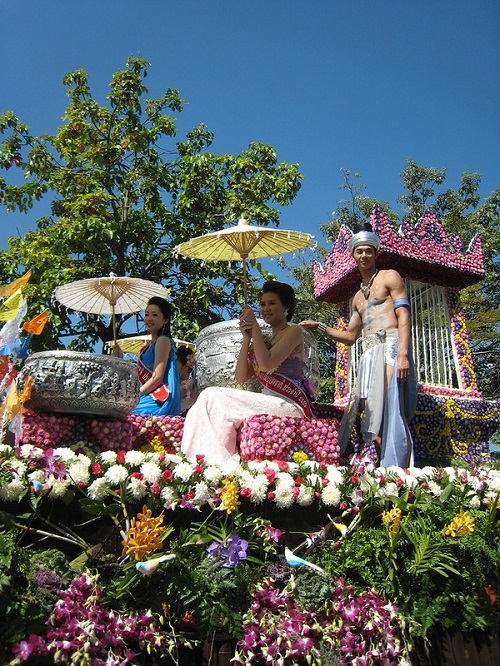 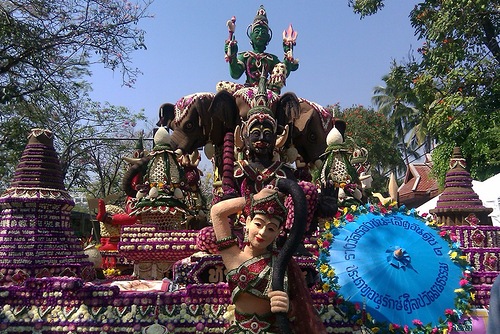 Traditional Festival of Flowers in Thailand 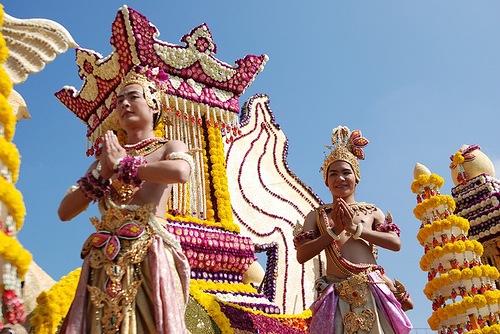 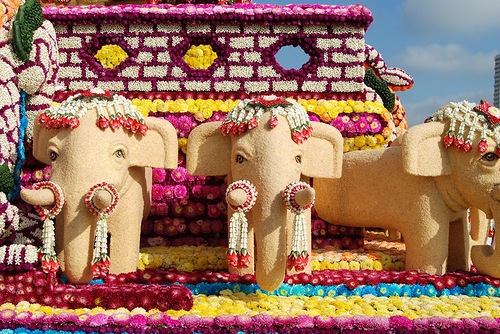 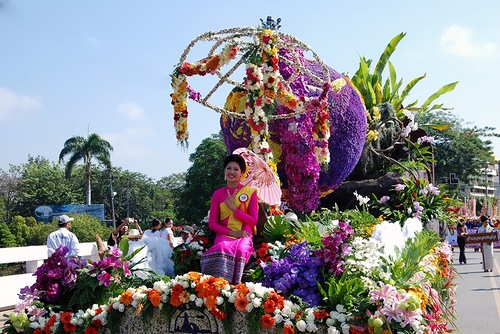 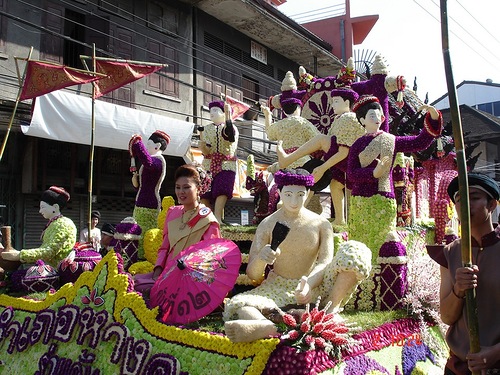 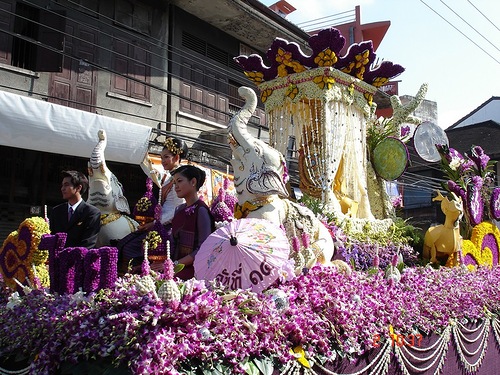 The Festival of Flowers takes place in early February 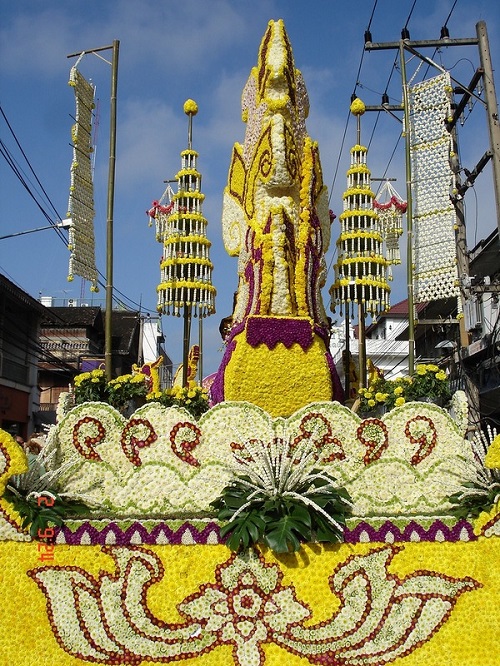 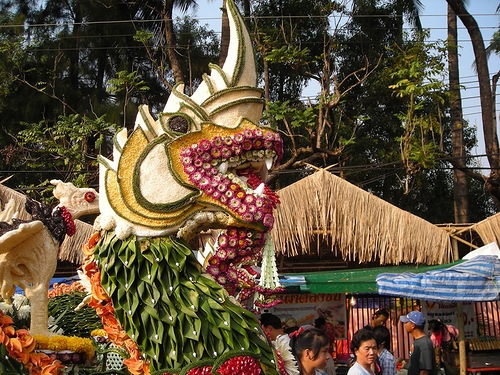 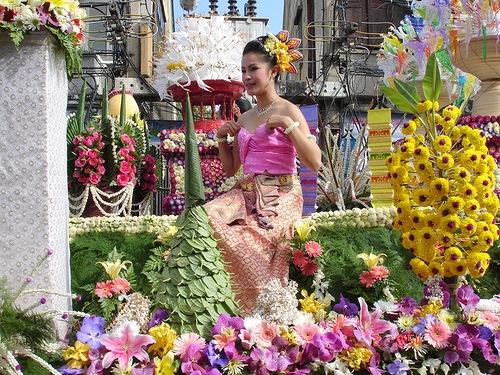 A girl at her flower exhibition 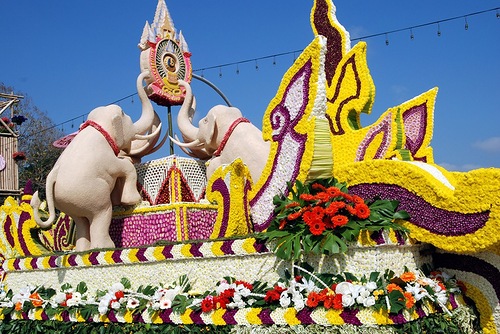 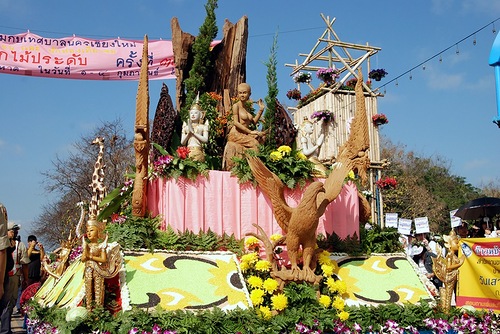 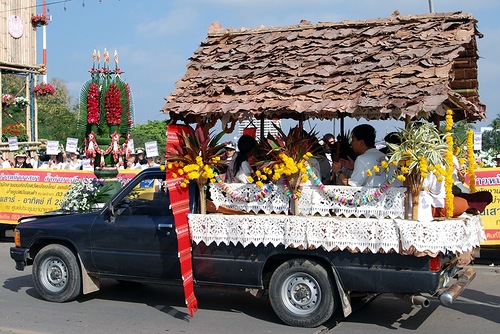 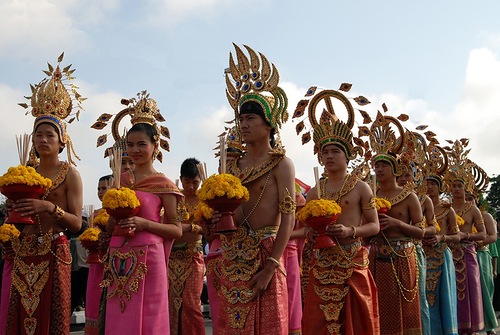 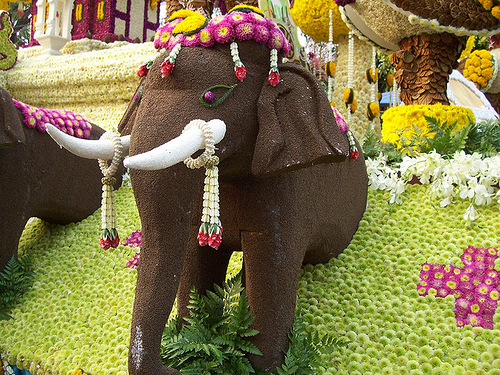 Fragment of sculptural composition of flowers 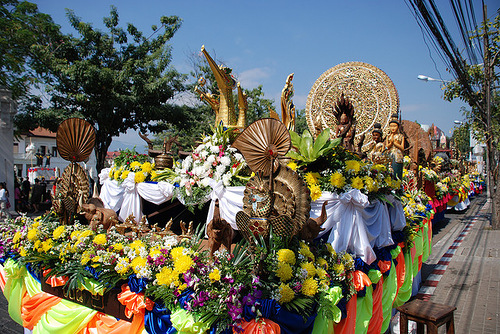 Sea of Flowers and colors 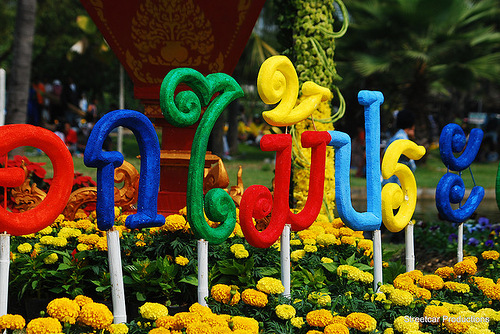 Welcome to the Festival of Flowers 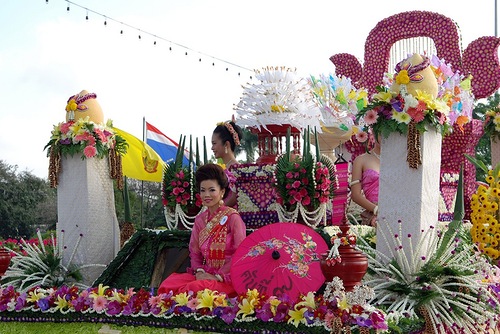