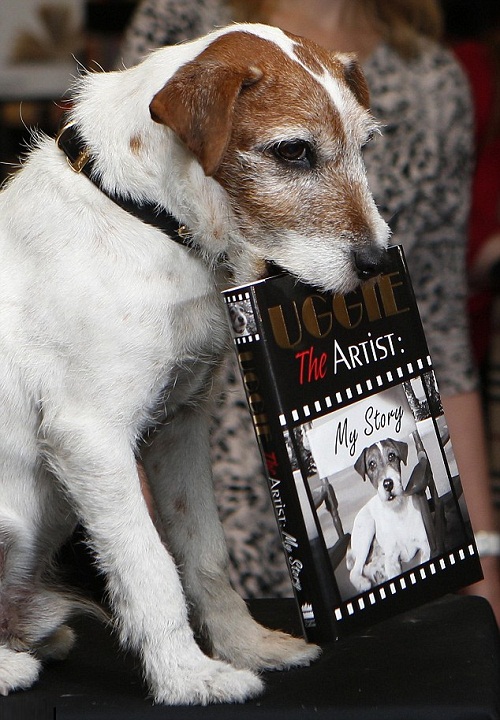 My story. Uggie the Autobi dog-raphy signed with a paw

Uggie the Autobi dog-raphy signed with a paw
The story of Uggie, the actor, began in the U.S. state of Florida in 2002. From birth, the dog has a distinctive energetic character, because of which its first owners would take it to a dog shelter. But fortunately, the temperamental dog was spotted and taken by a professional Californian dog breeder Omar von Muller. The dog was very smart and very willing to work. Officially retired from show business this year, the world’s most famous dog has appeared with memoir “Uggie, My Story”, which was published in the US, UK and France in October 2012. The book tells the story of Uggie’s rise from abandoned puppy to one of Hollywood’s biggest stars. So the ten-year-old Jack Russell terrier, who starred in The Artist, has taken a path well-trodden by many retired Hollywood bipeds – writing his memoirs. 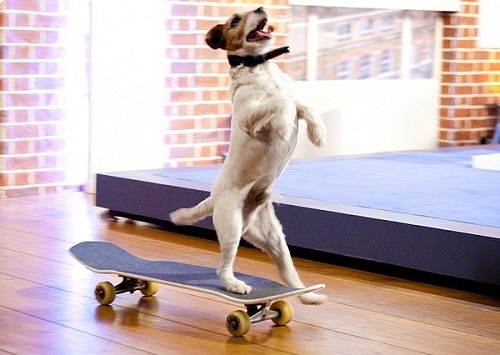 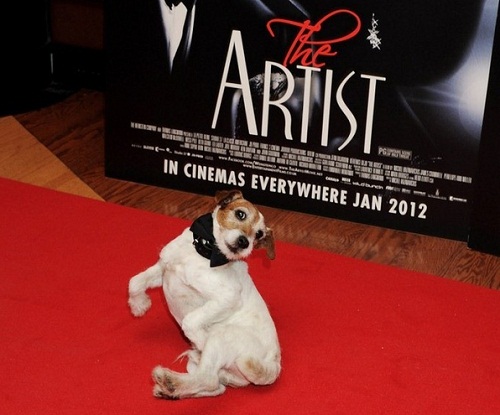 Posing on the red carpet

On February 8, 2012, Uggie was named as Nintendo’s first-ever spokes-dog. He won the Palm Dog Award for best performance by a canine at the 2011 Cannes Film Festival, for his role as “Jack” in The Artist.

He has also received a special mention at the Prix Lumiere Awards, the French equivalent of the Golden Globes. Uggie and Cosmo shared the prize for “Best performance by an animal”, awarded by The Seattle Times movie critic Moira Macdonald.

On June 25 2012, was the first dog ever to be invited to immortalize his pawprints in cement outside Grauman’s Chinese Theatre in Hollywood Boulevard and the City of Los Angeles declared the date Uggie Day.

Owner Mr Von Muller has praised the rescue dog for changing his life. ‘He has achieved so much. But there are lots of Uggies out there, all they need is a loving home and they will flourish,’ he said. So the ten-year-old Jack Russell terrier, who starred in The Artist, has taken a path well-trodden by many retired Hollywood bipeds – writing his memoirs.

The book tells the story of Uggie’s rise from abandoned puppy to one of Hollywood’s biggest stars under the guidance of his owner, dog trainer Omar Von Muller. Miss Holden said: ‘Uggie’s journey from a rescue dog to star of the silver screen is a classic rags to riches story which can happen to animals as well as humans.’

Uggie’s retirement was announced in February after he began suffering from a ‘shaking syndrome’ caused by a neurological disorder. Lorna Fortuin, a portrait painter from London, said: ‘I love watching his response to people. It was amazing to see a dog react like that on film.’ 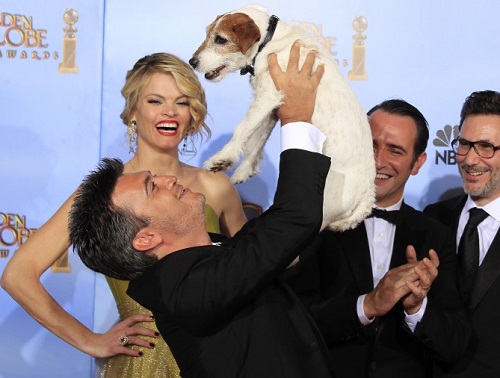 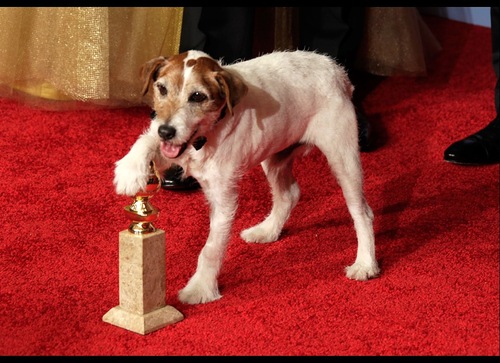 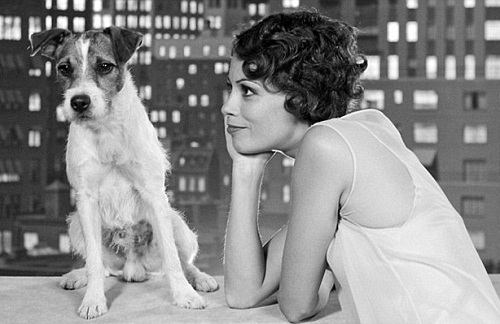 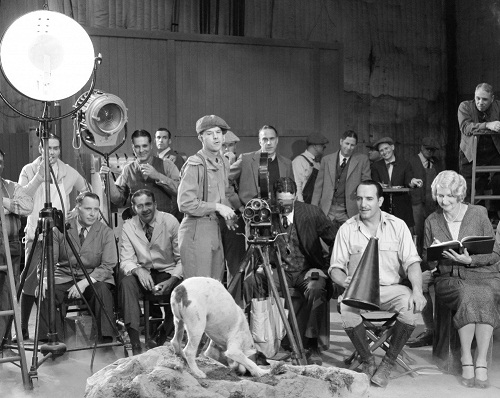 During filming. Uggie as Jack in the Artist 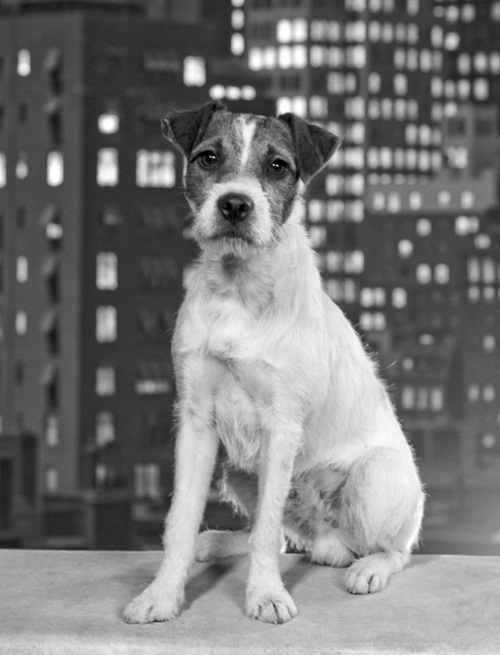 Talented actor, Uggie as ‘Jack’ in The Artist 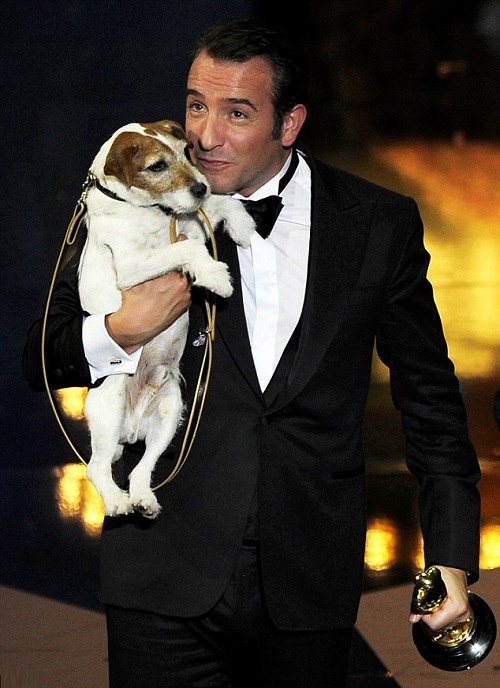 On 13 February 2012, was named Best Dog in a Theatrical Film at the first Golden Collar Awards, awarded by Dog News Daily 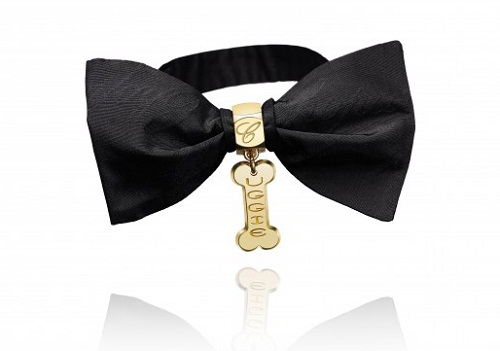 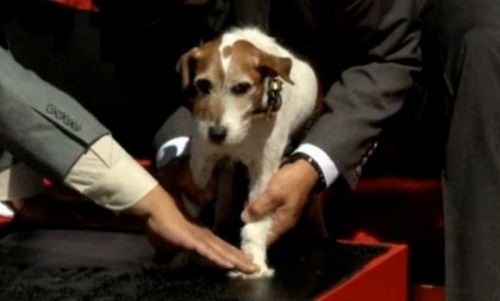 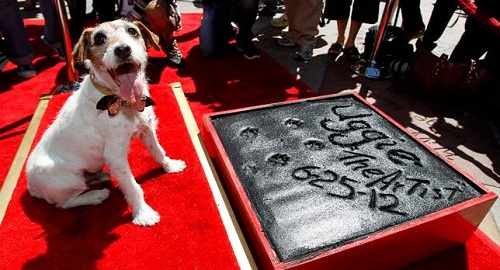 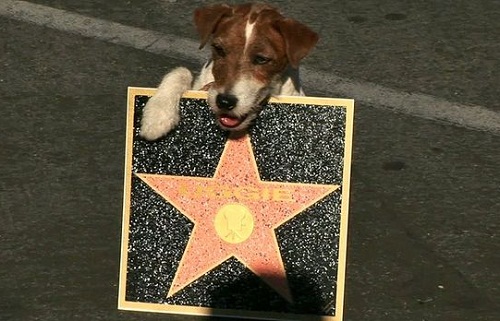 A star on the Hollywood Walk of Fame, Uggie 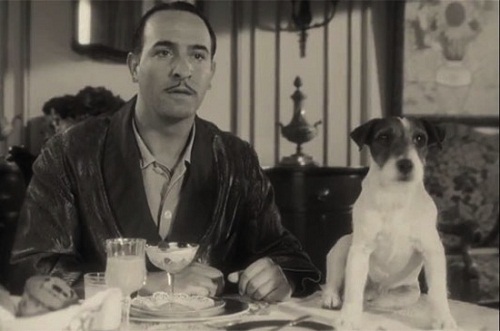 Scene from the movie, Uggie 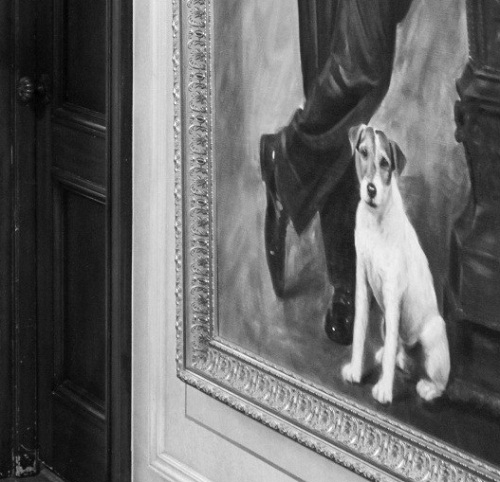 The dog depicted in the painting. Uggie 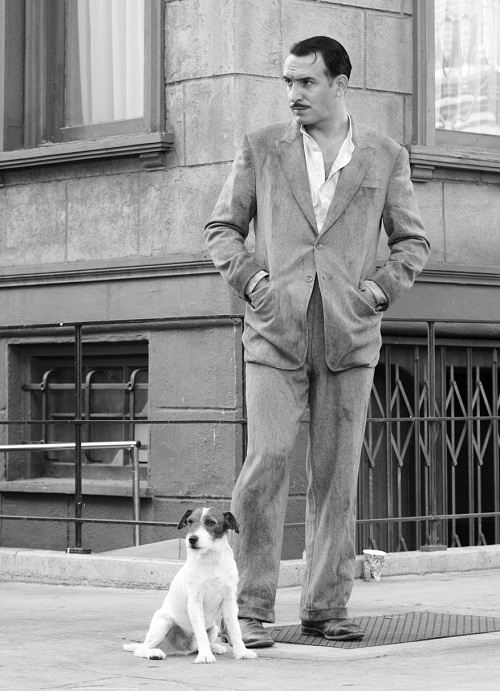 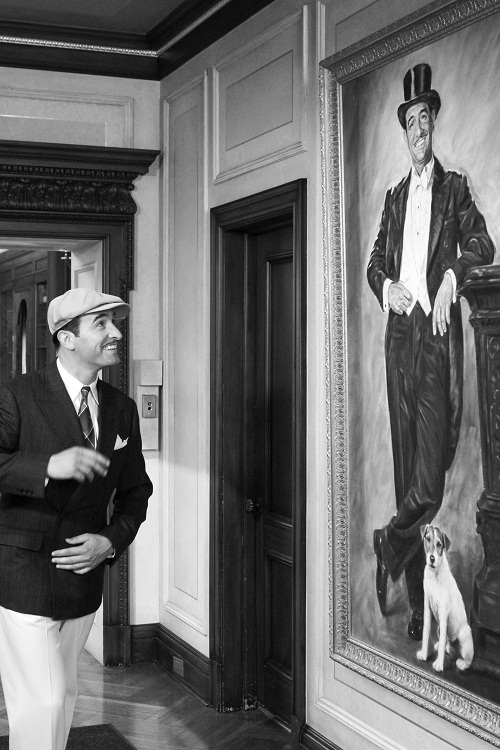 Looking at the portrait with Uggie 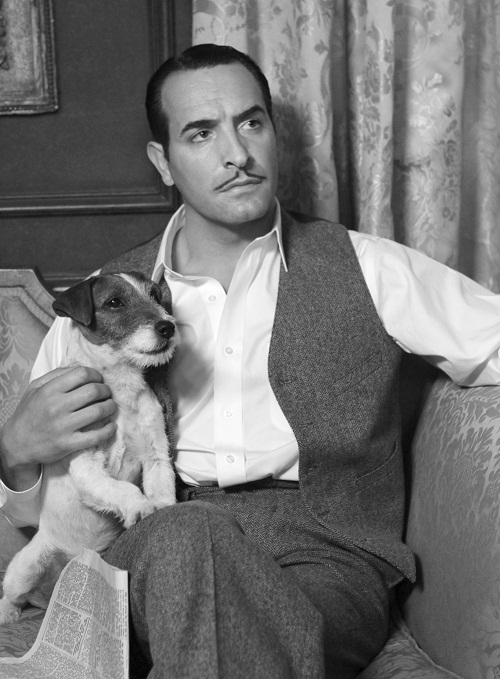 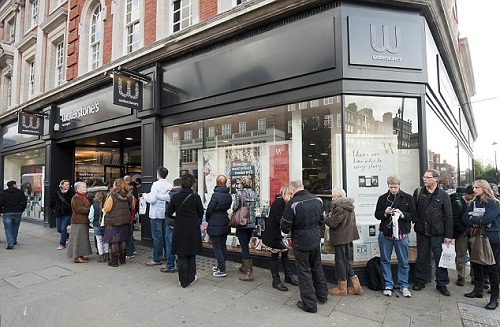 The crowds queuing around the block to give Uggie a pat on the head at his first British book signing on October 30, 2012 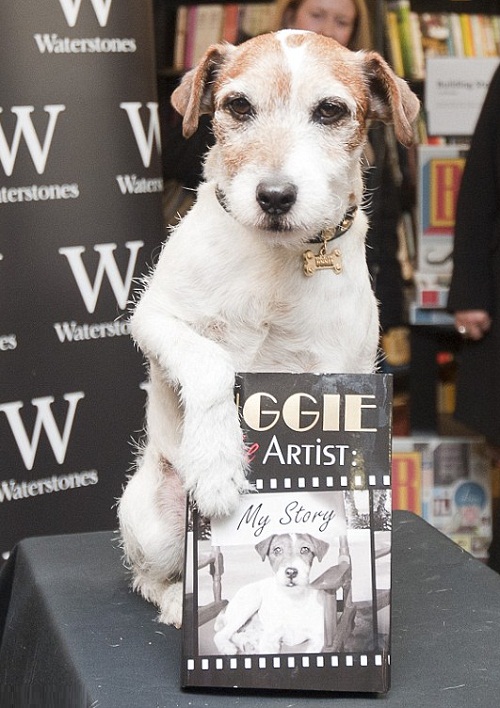 The dog with his autobiography book 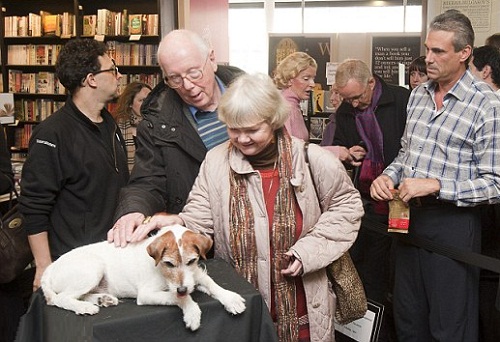 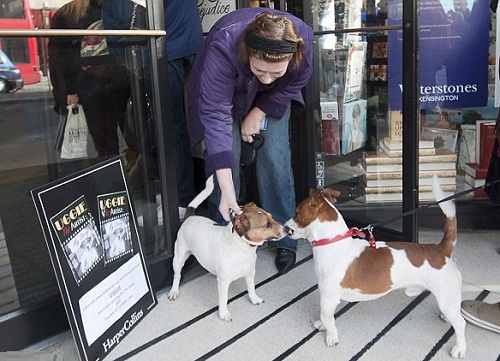 Meeting with a relative 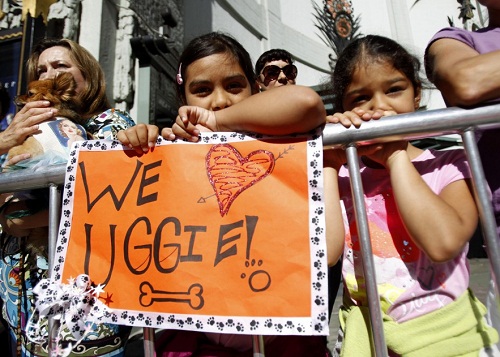 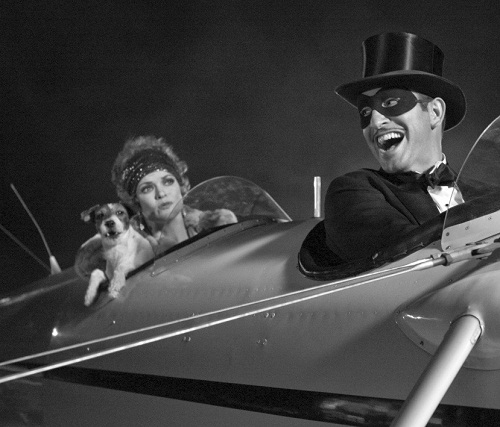 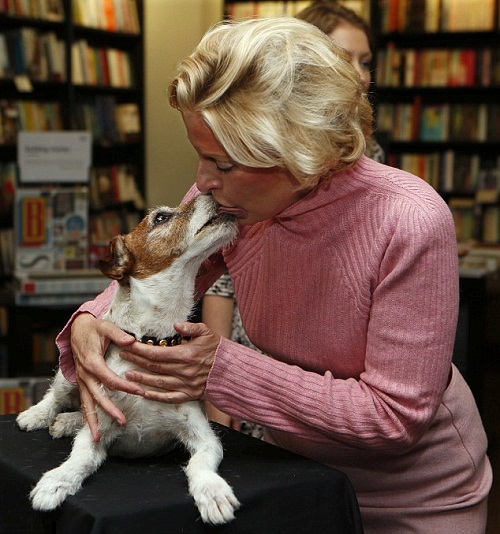 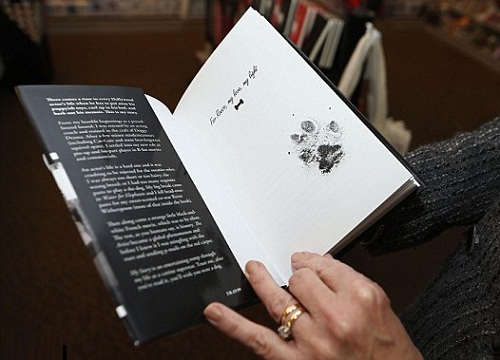 The autobi-dog-raphy signed with a paw 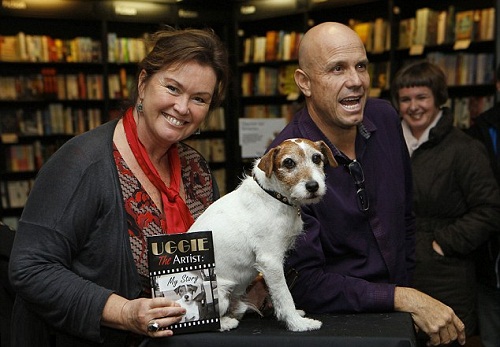 At the presentation of the book