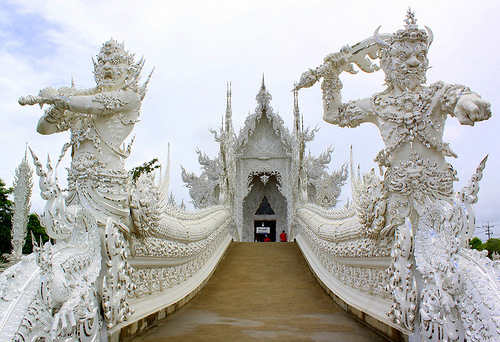 Wat Rong Khun – White temple in Thailand
A sort of surreal tale, many call Chalermchai Kositpipat, an architect who conceived this ambitious project, a modern Hieronymus Bosch. Meanwhile, he compares himself with the famous architect Antoni Gaudi, who devoted his entire life to the cathedral Sagrada Familia. In fact, White Temple – the personification of purity of the Buddha and nirvana. Construction has been going on for many years, and the architect said that the completion of the project would take about 90 years. Remarkably, the architect and artist Chalermchai refused any sponsorship, so that no one can restrict his imagination and plans – all the money he gets from donations. The temple is located in the province of Chiang Rai (Thailand) 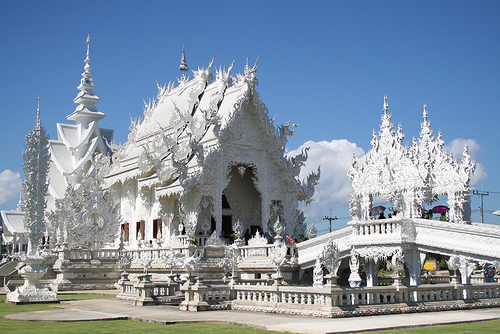 Born in the village of Ban Rong Khun, in the northern province of Thailand, Kositpipat was fond of drawing since early childhood. So, in 1977 he received a bachelor’s degree in painting. However, his style of painting was far from the canons, honored holy by all artists of Thailand. Despite the hostility and alienation from the majority of his colleagues, Chalermchai continued to develop his own style. Almost a decade has passed in hard work without praise and recognition.

In the eighties, the artist received a large order for the painting of a Buddhist temple in London. But he made it in his unusual manner, triggering a wave of criticism at home. However, the King of Thailand, casually acquainted with the work of Chalermchai Kositpipat, bought several of his paintings for his palace and spoke favorably about their author. Immediately rigorous evaluation of his work by critics and uncompromising artists changed to … enthusiastic! So in 1998, one of the works of the artist was sold at auction for almost twenty thousand dollars. For Thailand, it is a fantastic amount. 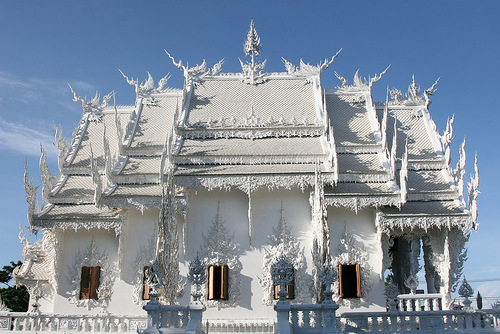 Unexpectedly, the artist decided to spend the money on his dream – the creation of white Buddhist temple miracle. He bought a plot of land in his native village, and in 1997 began working. The construction of the ensemble is still ongoing, and, as the artist says, if all goes well, he will finish it, maybe by 2050. 9 buildings are in the plan. But even those that are finished, have instantly become known throughout the country, becoming a pearl of Thailand. Many rich people, businessmen and organizations offer to provide the architect, painter and sculptor in one person their sponsorship. But Chalermchai Kositpipat knows that the sponsors always help not only with money, but also rules to follow. And he does not want his artistic freedom to be limited. 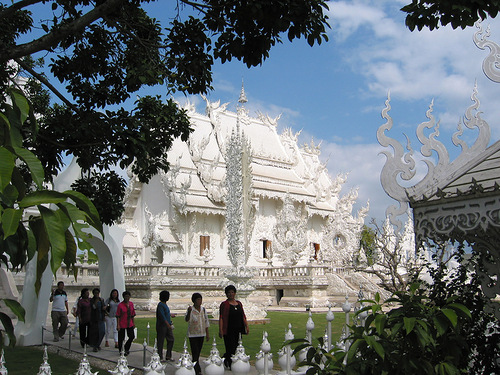 Visitors to the White temple

But the interior of the church is far from the canon. The paintings in the style of an ancient religious Thai painting are intertwined with images of popular culture of the XX century. Here you can find characters from the movie “Star Wars”, “The Matrix”, and many others that have become iconic. “We need to speak with the audience using the language and symbols they understand,” – convinced the artist. That’s why you can see Hollywood characters fighting on the side of good, together with Buddhist saints. And the forces of evil are presented along with the traditional demons, monsters – modern, for example, alien predators from the cult film “Alien.” 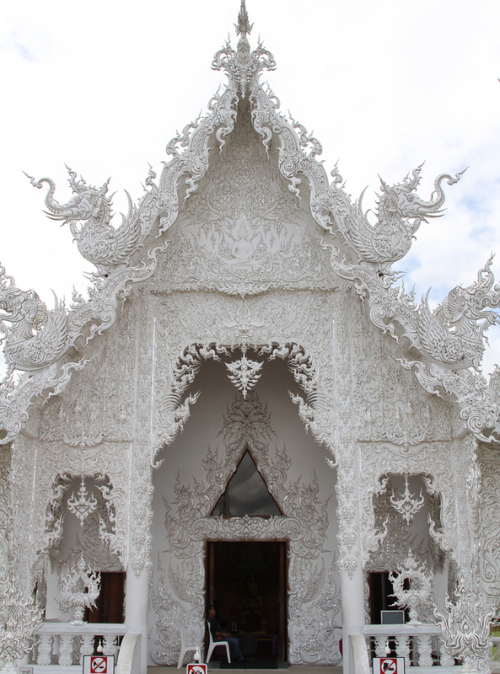 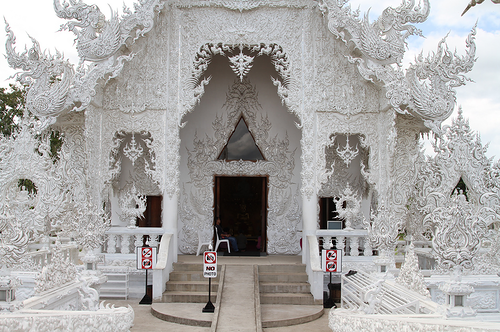 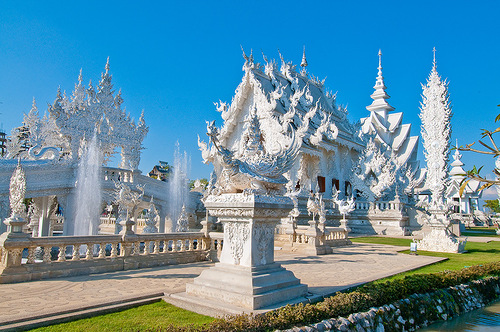 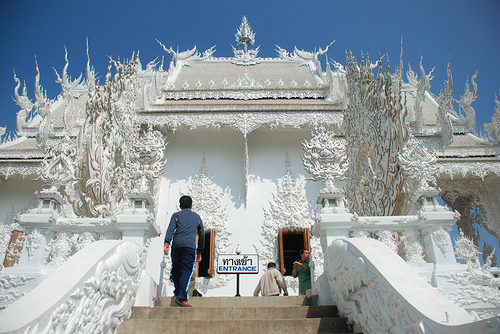 Entrance to the White temple 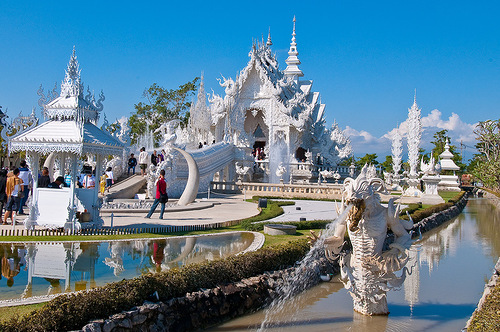 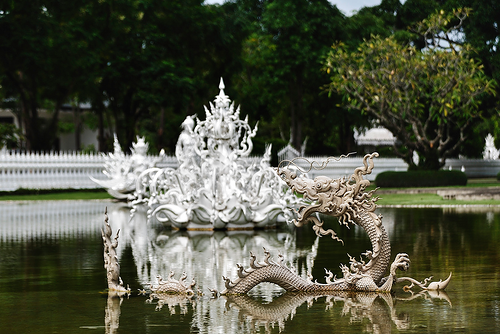 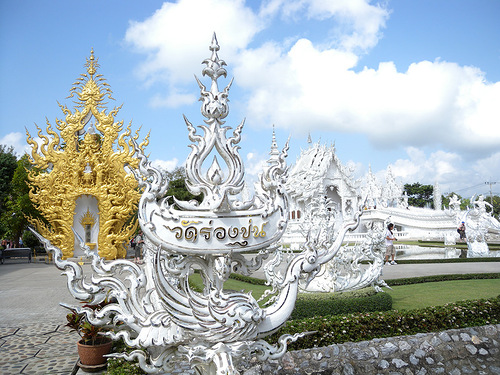 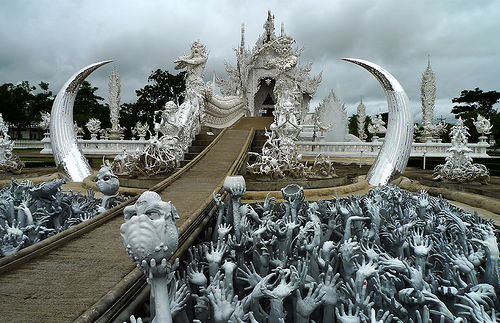 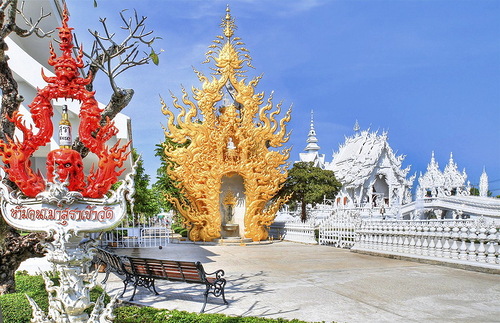 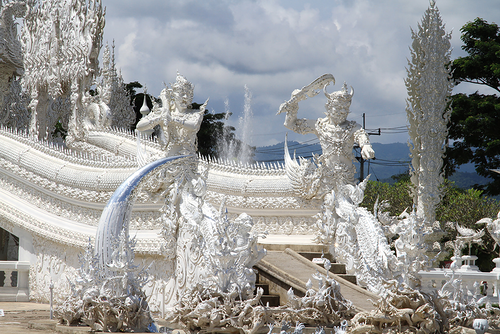 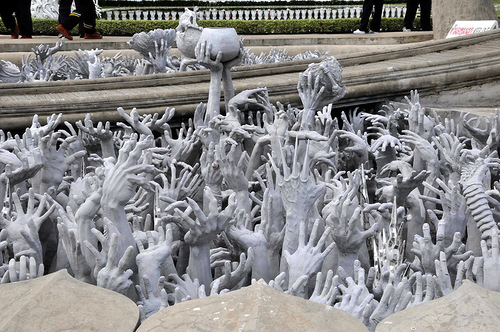 Weird sculpture on the territory of architectural complex of the temple 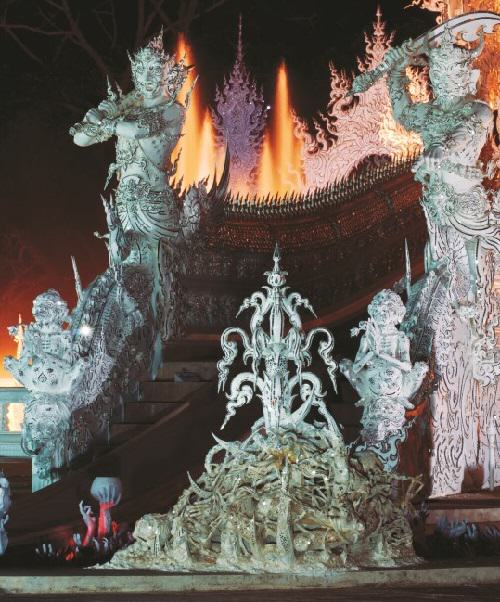 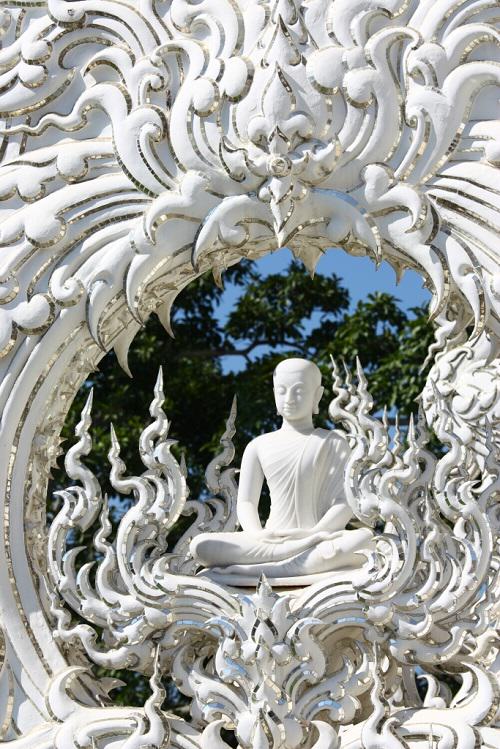 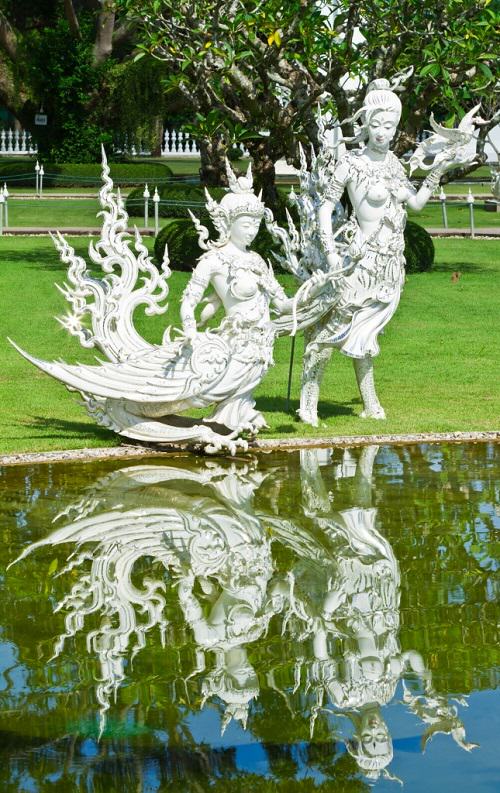 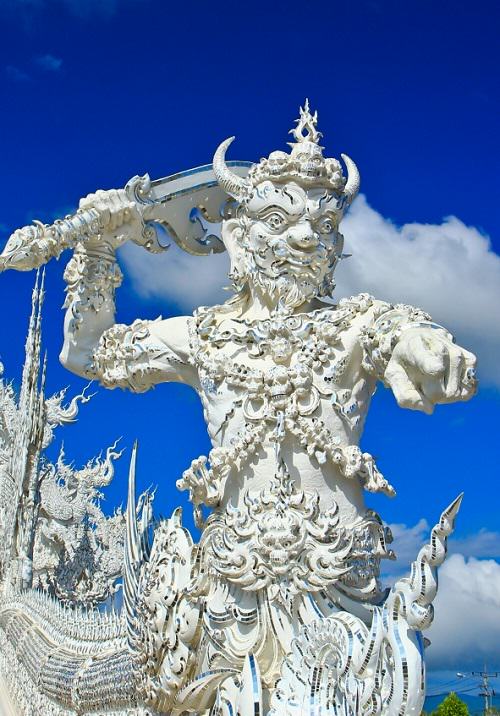