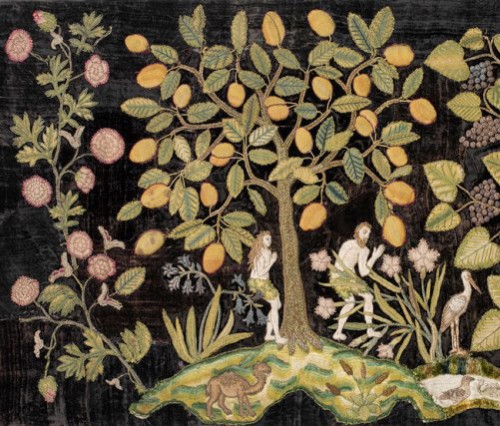 The Metropolitan Museum of Art exhibits a unique collection of European embroidery of 15-19 centuries. The most striking sample of antique embroidery art is “Garden of Eden”, made in the 16th century in England. This panel – decorated with small elements—fruits, flowers, and leaves, worked in tent stitch on canvas and then applied to the dark velvet foundation. And on it – the river in the Garden of Eden, the figures of Adam and Eve, and God the Father, in polychrome silk and metal threads. The garden is monumental, almost overwhelming the figures.

The three trees that anchor the composition would have brought to mind the biblical description of trees in the Garden of Eden. Also, the Tree of Life and the Tree of Knowledge of Good and Evil. The scene of Adam and Eve expelled from Eden.

Adam and Eve wear garments that suggest articles of late Elizabethan dress and the Geneva Bible of 1560 referred to their first clothes as “breeches.” In this and other embroidered renderings of the story of the expulsion from Eden, Adam and Eve are treated more gently by God and the expelling angel than they are in contemporary print sources.

The Garden of False Learning
This embroidered wall hanging depicts an episode from the Table of Cebes, a once renowned literary work of ancient Greece. The story is as follows: Strangers visiting the temple of Saturn in Thebes are attracted by a tablet on the wall which bears a mysterious design. An old man, noticing their puzzled expressions, explains that the design symbolizes the course of human life. Besides, its trials and eventual rewards. His interpretation applies the Socratic doctrine that only the education of the mind and the consciousness of virtue can lead to happiness.

Life, shown as a plot of ground contained within a wall and subdivided by two other concentric walls, each with a gate. At the gate of the outermost wall are the souls of infants about to enter life. As each passes through the portal into a large enclosure and becomes a young wayfarer, he meets various allegorical figures of dubious virtue. And they point out the easy pleasures of existence. Drunk with the wine of Error and Ignorance, the average wayfarer devotes himself to riotous living and soon enough endures the usual aftermath of pain and misery. When all seems lost, Penitence rescues him, and at length he reaches a gate of the inner wall, beyond which – found those who, seeking Learning, are misled by False Learning.

The arts and sciences and the more polite vices take up much time in this pleasant region. The wayfarer might discover, however, even from False Learning, information that could be useful on the last lap of the journey. Thus fortified, some wayfarers carry on and, after a painful pilgrimage, reach the innermost gate, guarded by the figure of True Learning, beyond which is happiness and journey’s end.

Depicted in the Museum’s embroidery is the second leg of the journey: the young wayfarer joins the sophisticated denizens of the Garden of False Learning. Meanwhile, the embroidery made by or for the Limousin family Fenis de Prade, a provenance indicated by coats of arms, and after 1547. The date of the woodcut by Strasbourg artist David Kandel that served as model for some of the figures.

Panel from an Altar Frontal – The Flagellation, mid–14th century. Made in Florence, Italy

Panel from an Altar Frontal – The Flagellation, mid–14th century. Made in Florence, Italy.
Silk and metallic threads on linen. The work of Florentine embroiderer Geri Lapi. More than twenty shades of silk and metallic threads give richness to the design. And the gold background enlivened with raised scrolling vines. The Flagellation is one of twelve panels attributed to Geri Lapi depicting the life of Christ, of which nine are in the Museum.

Commemorative Portrait of Madame de Pompadour. Work by French painter François-Hubert Drouais (December 14, 1727 – October 21, 1775). In the 19th century, the craft of embroidery was actually a favorite pastime for wealthy ladies. Besides, old masters depicted such hobby in their paintings. In particular, portraits of beautiful ladies busy with their crafts. 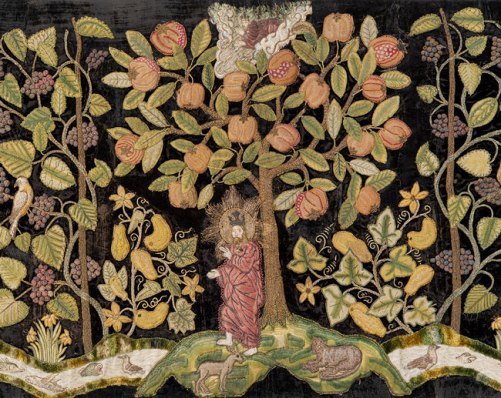 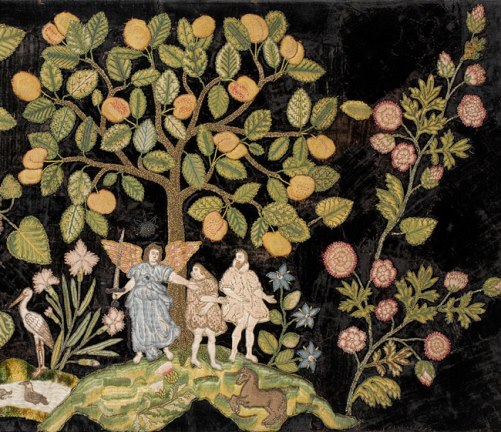 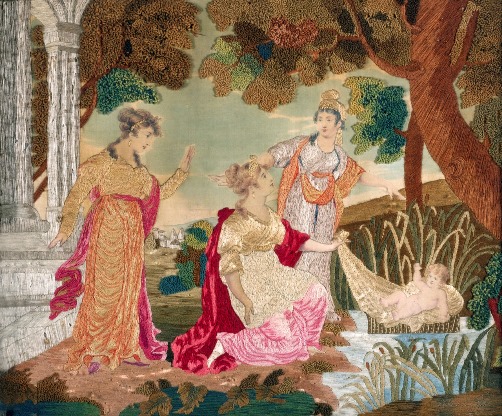 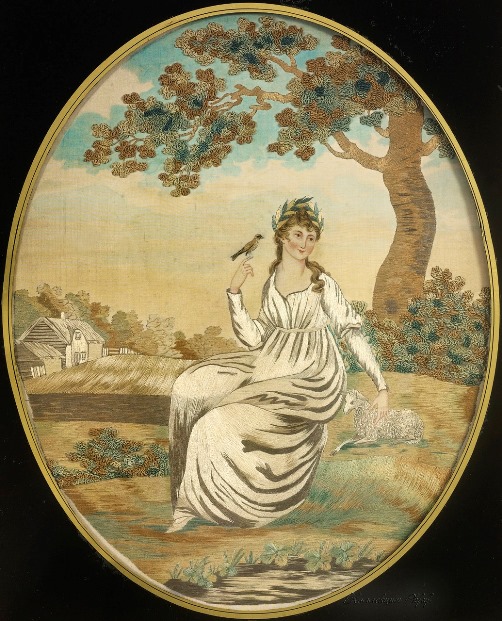 A lady with a bird. Vintage embroidery 18-19 century 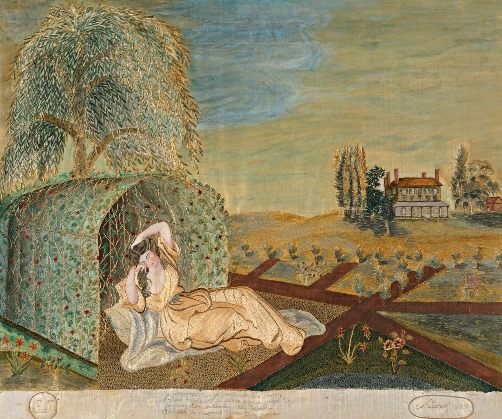 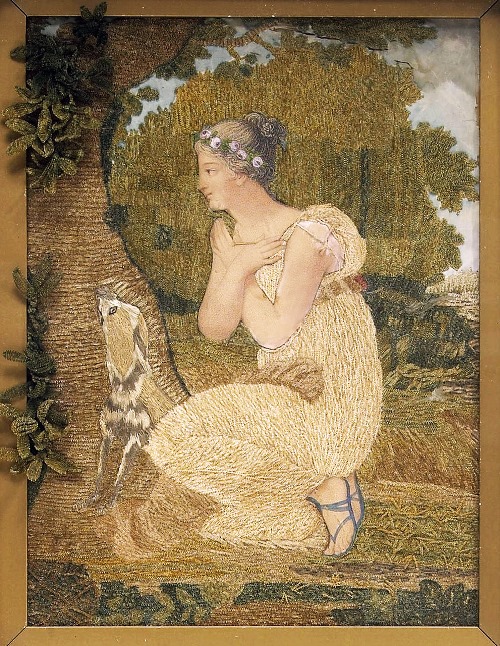 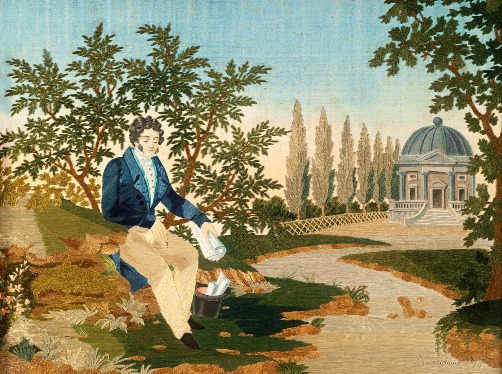 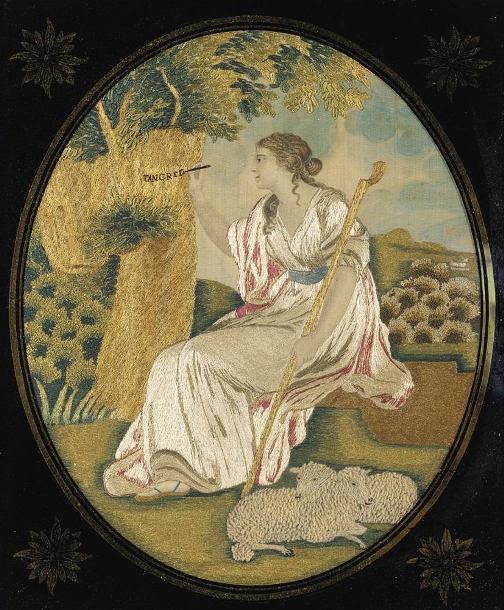 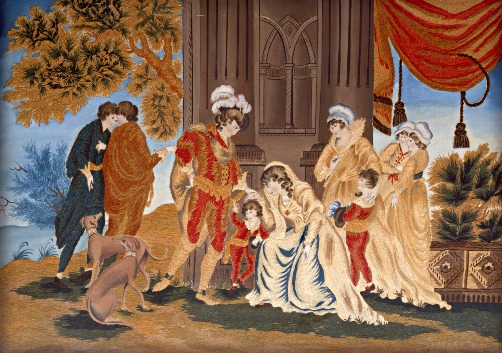 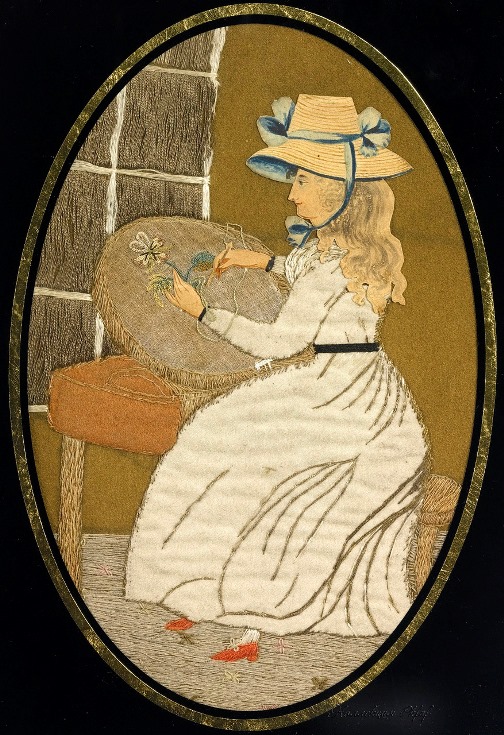 A craftswoman depicted in 18-19 century embroidery 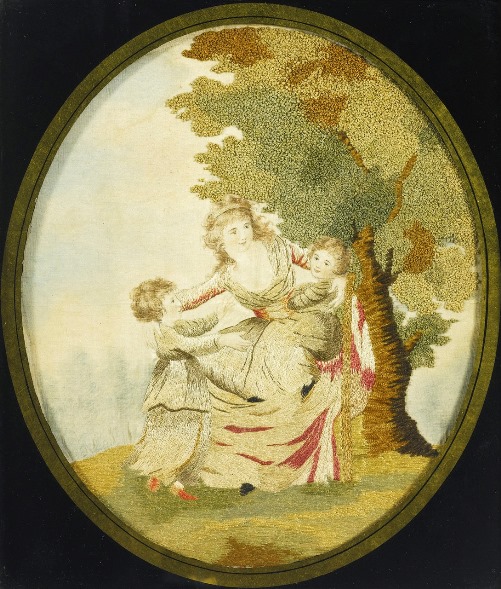 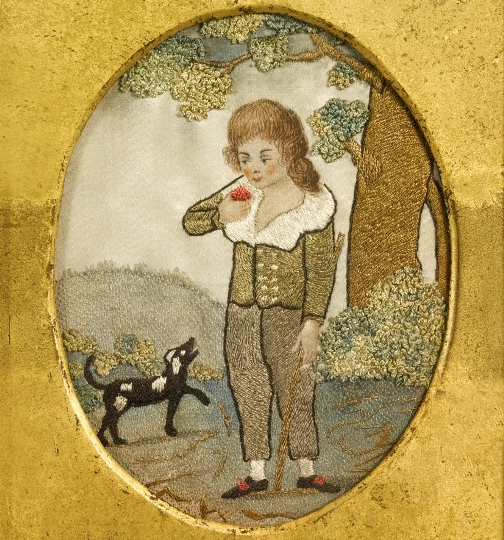 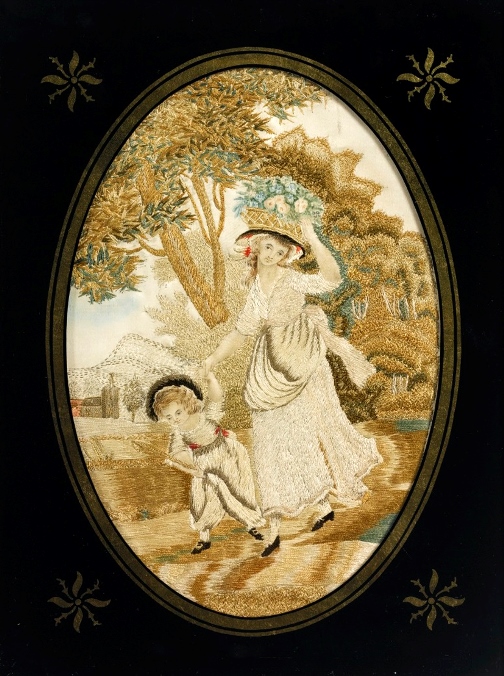 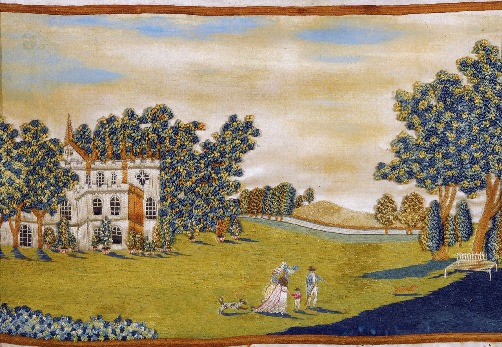 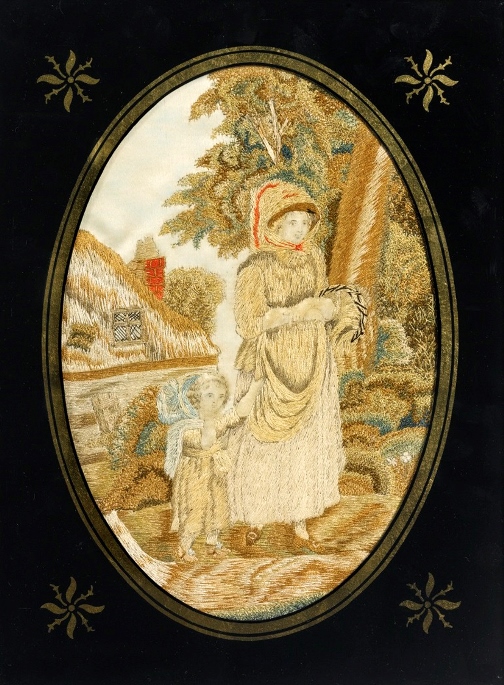 A woman with a girl. Embroidery of 18-19 century 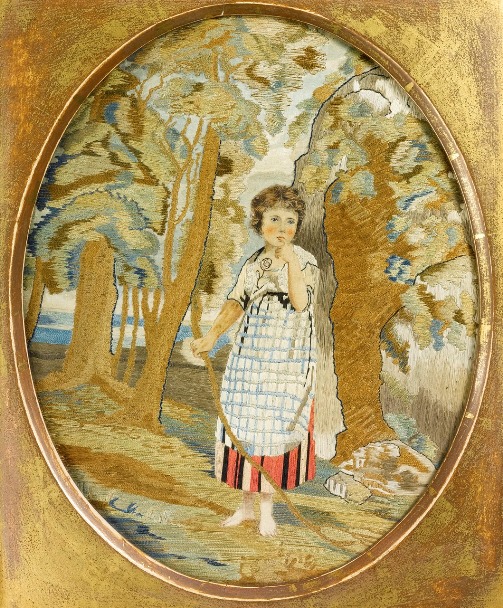 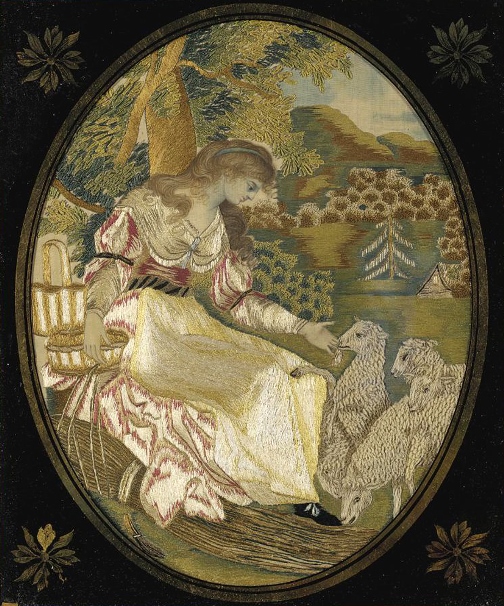 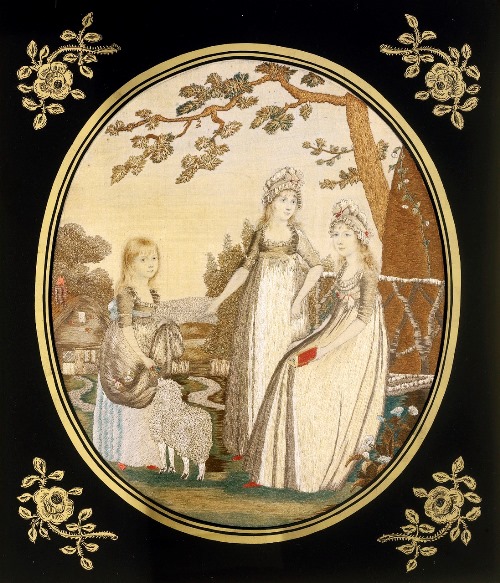 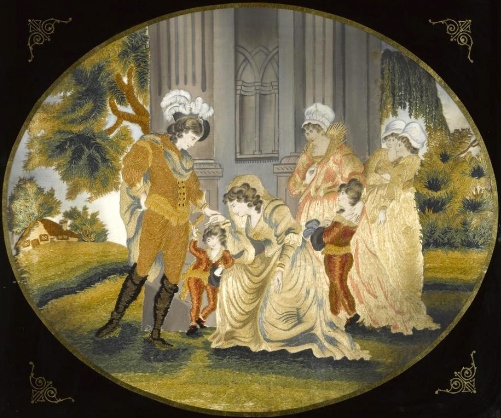 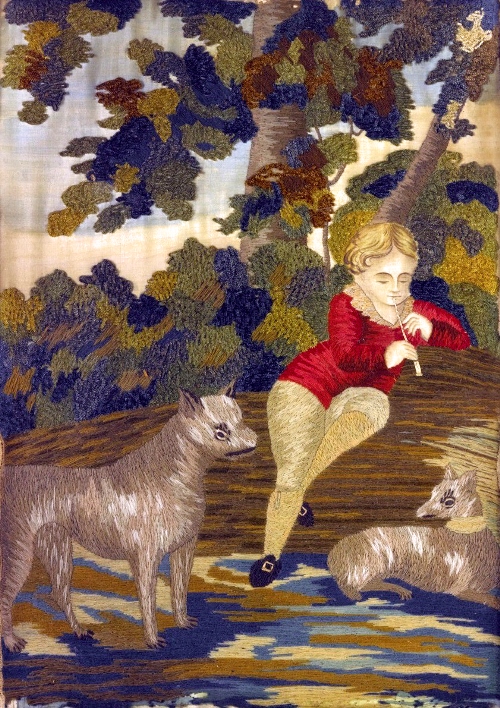 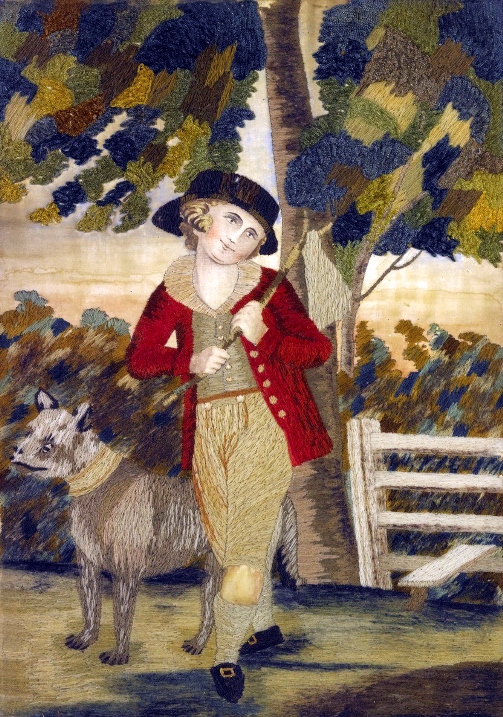 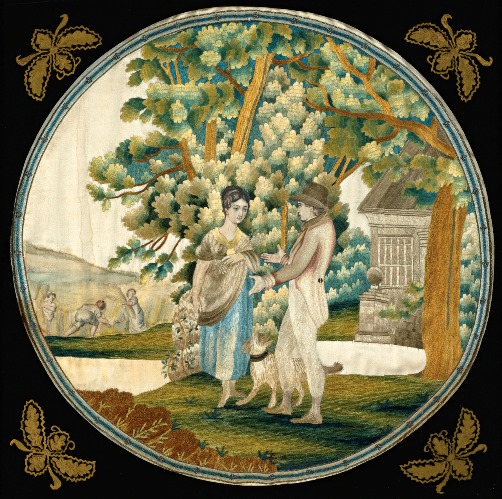 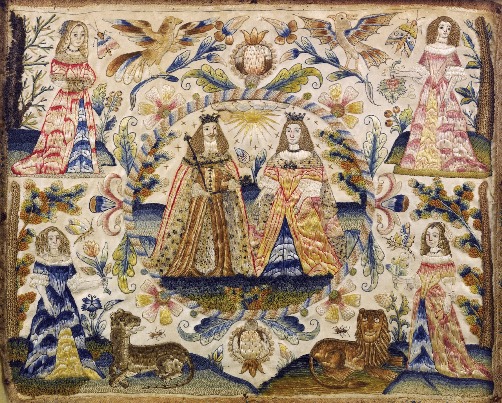 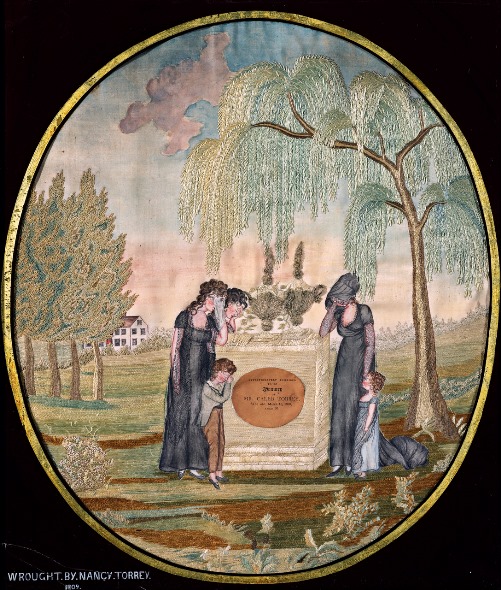 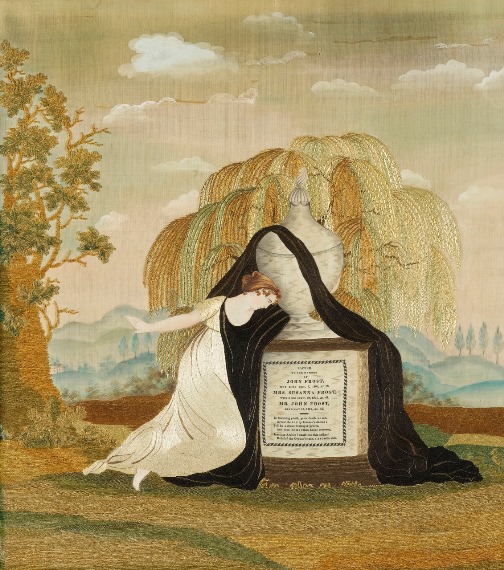 On the grave. Vintage embroidery 18-19 century 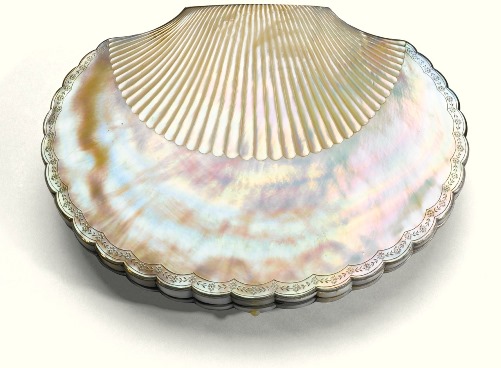 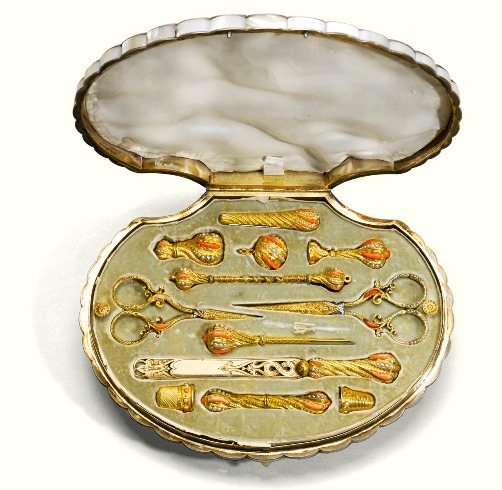 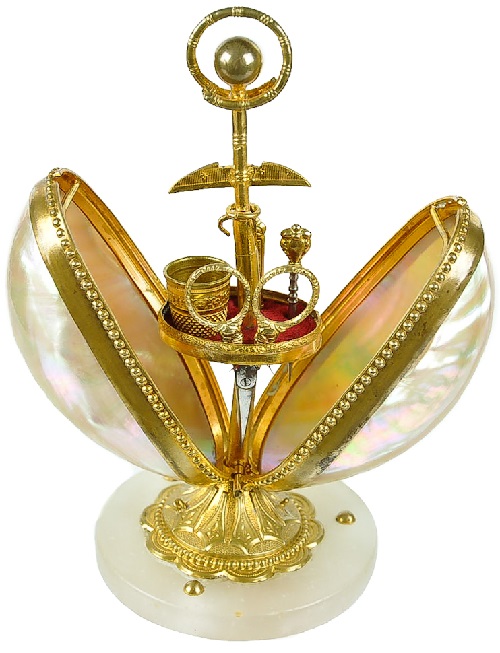 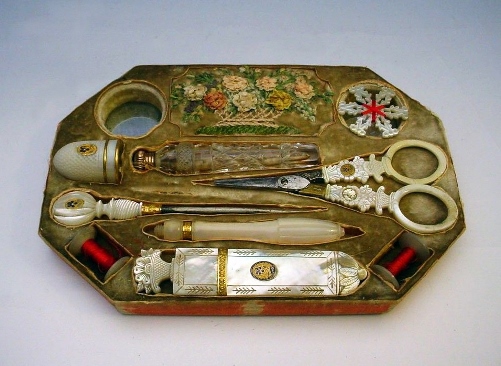