The painting ‘Eternal Russia’, 1988, one of the artist’s central works shows us in one panorama the entire history of Russia (the image can be enlarged). Artist historian and philosopher Ilya Glazunov (June 10, 1930 – July 9, 2017)

Artist historian and philosopher Ilya Glazunov
The painting ‘Eternal Russia’, 1988, one of the artist’s central works shows us in one panorama the entire history of Russia. The painting measures 3 x 6 meters. The great artist’s genuine fame was achieved as the result of the enormous lines of visitors to his exhibits, both at home and abroad. The West German news magazine “Der Spiegel” once wrote: “He who is against Glazunov is against Russia.” The extraordinary vision of Glazunov the artist, historian and philosopher is realized in the stunningly beautiful harmony of color and his confident use of foreshortening, grouping, and composition rhythm. The painting “Eternal Russia” is a textbook of Russian history in its genuine majesty, a song of the glory of our nation. The paintings of Ilya Glazunov are open books for all who wish to know and better understand Russia. 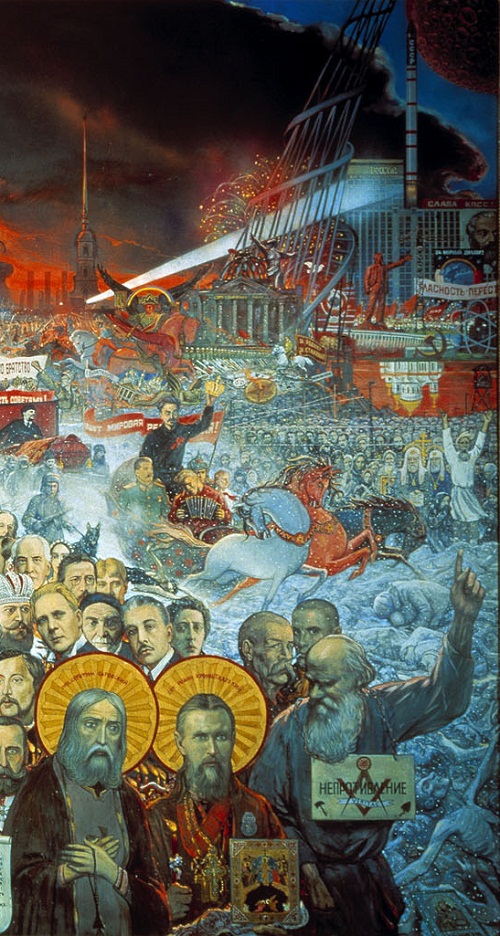 Meanwhile, Ilya Glazunov – Rector of the Russian Academy of Painting, Sculpture, and Architecture. Besides, he is an active Member of the Russian Academy of the Arts, Professor, and People’s Artist of the USSR. In addition, he is an Honorary Member of the Royal Academies of the Arts in Madrid and Barcelona. Also, a recipient of the “Gold Medal of Picasso” awarded by UNESCO for Contributions to World Culture, and Recipient of Jawaharlal Nehru Award, as well as Laureate of the State Award of the Russian Federation.

Noteworthy, Glazunov’s illustrations for the works of his favorite writer, philosopher, and Russian prophet, Fyodor Dostoevsky, brought him worldwide fame. He is the only artist to have illustrated the complete works of the great writer. Glazunov’s illustrations and portraits of Fyodor Dostoevsky, Russia’s national treasure, are imbued with a philosophical profundity and with the spirit of the great imperial city of St. Petersburg. Copies of Dostoevsky novels illustrated by Glazunov have become rarities.

In fact, the impact of “Mystery of the Twentieth Century” might be compared to the explosion of an atomic bomb. The first version of the painting was completed in 1977, when Soviet art, mired within the stifling framework of the lies of Socialist realism, was busy singing the praises of Lenin, Khrushchev, and the Communist Party. The work, which required a titanic effort, portrays with concrete images our apocalyptic twentieth century world. 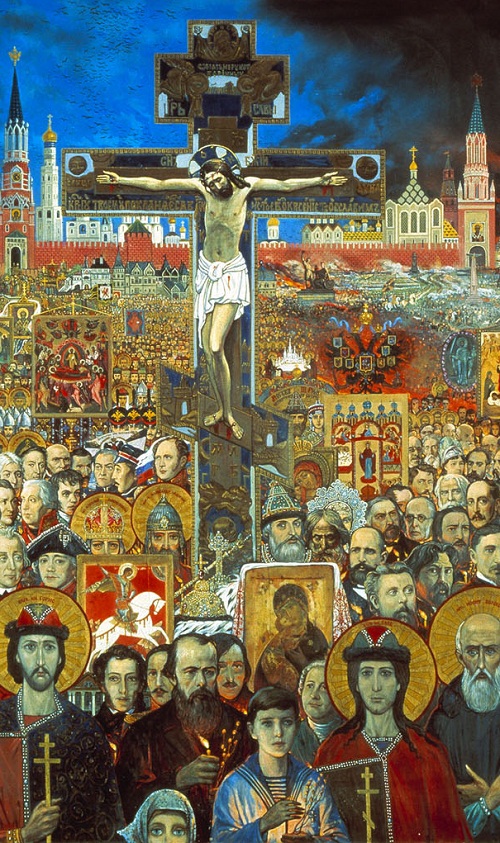 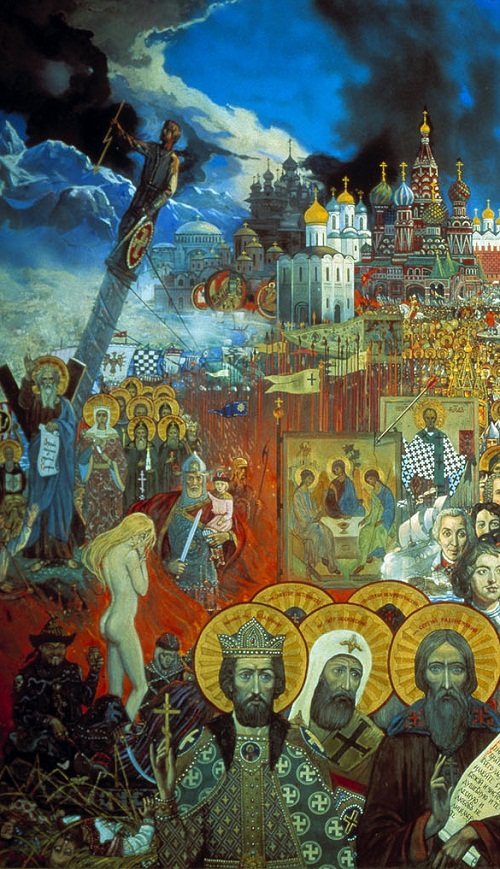 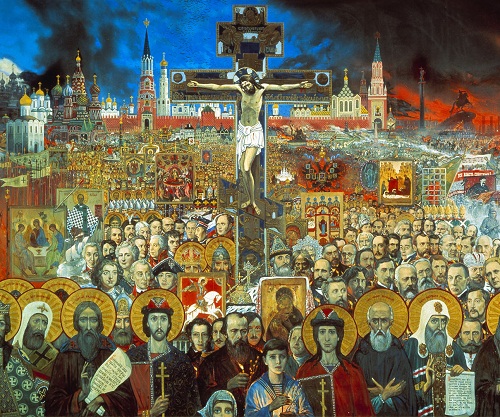 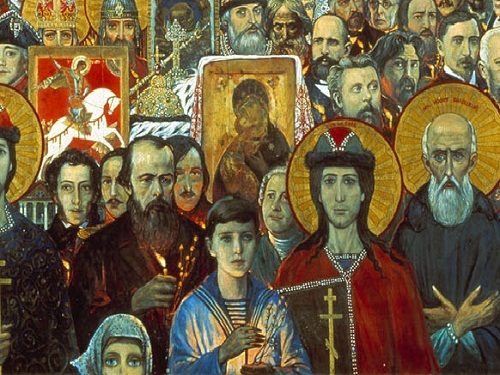 Great Experiment, 1990 (the image can be enlarged)

The contribution of the USSR to world culture and civilization. 1980 (the image can be enlarged) 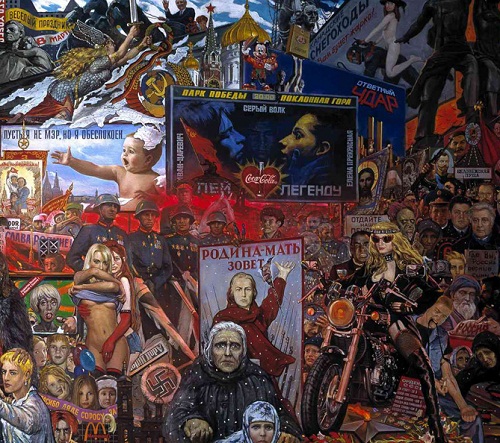 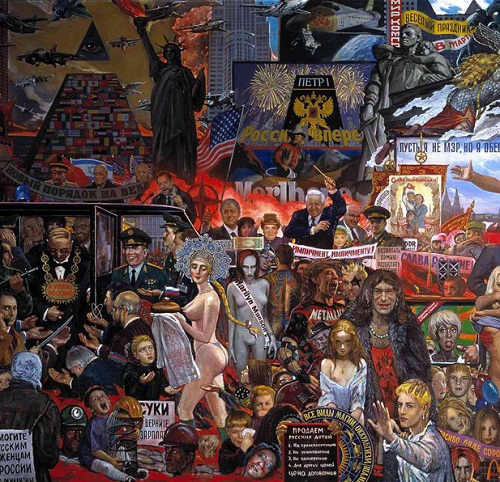 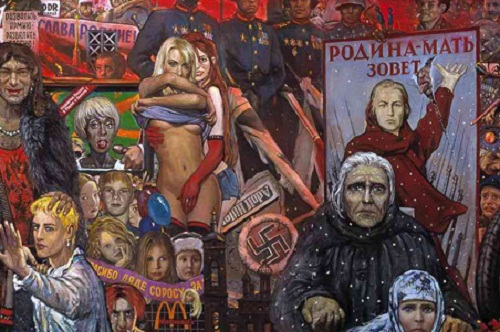 Painting Market of our democracy. 1999 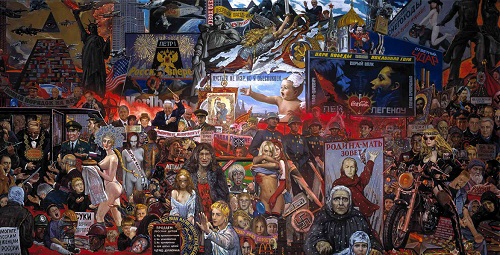 Glazunov. Market of our democracy. 1999

My life (in the centre – self portrait of Ilya Glazunov) 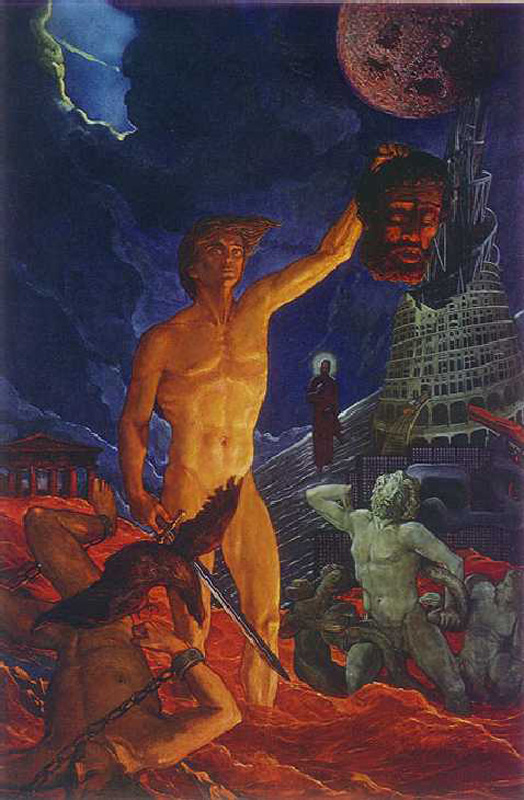 Anthem to heroes. 1984. Oil on canvas. The Tretyakov Gallery, Moscow 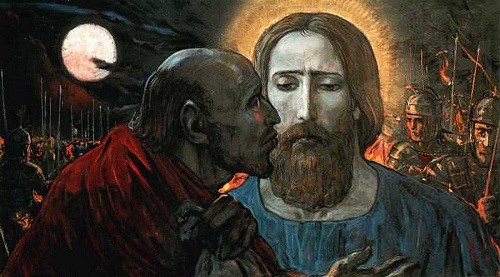 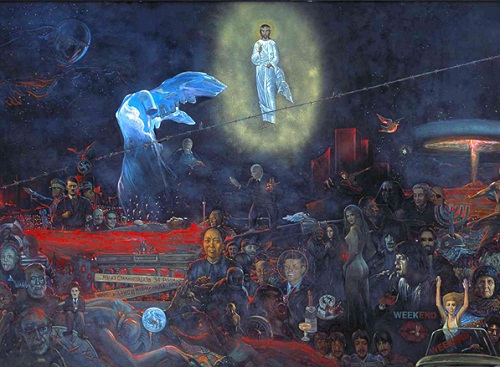 Mystery of the Twentieth Century, 1999 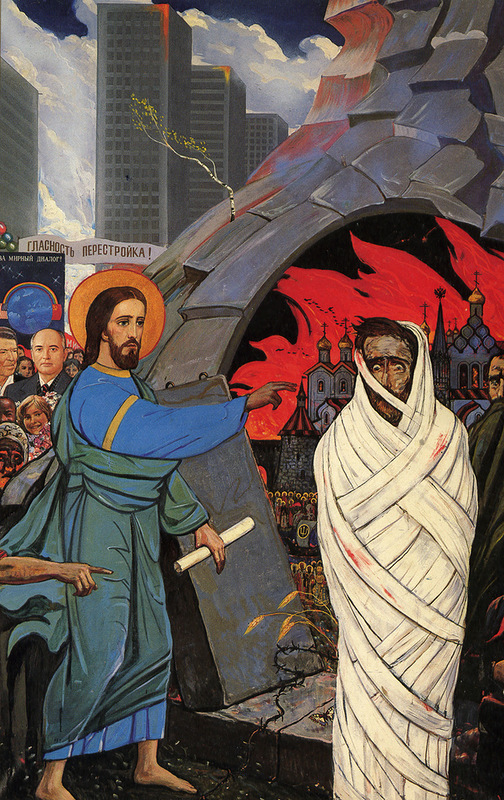 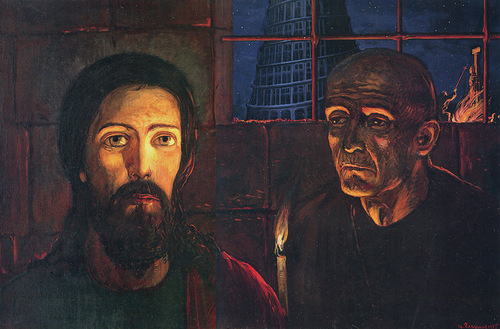 The Grand Inquisitor. The left part of the triptych. 1985 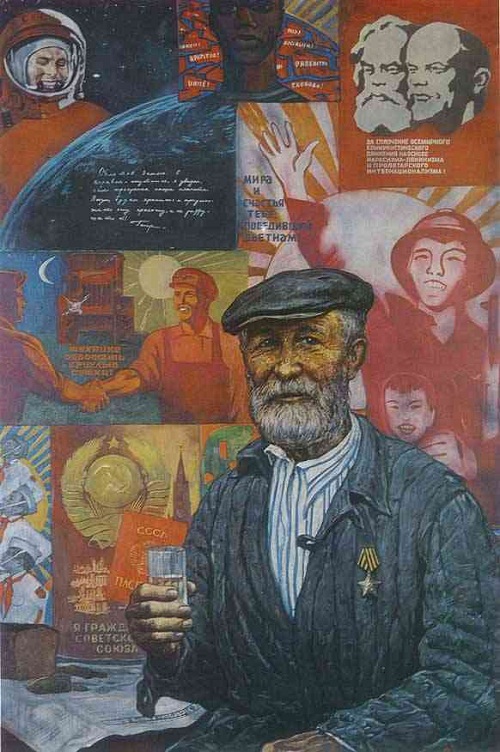 To your health. 1977. The Tretyakov Gallery, Moscow 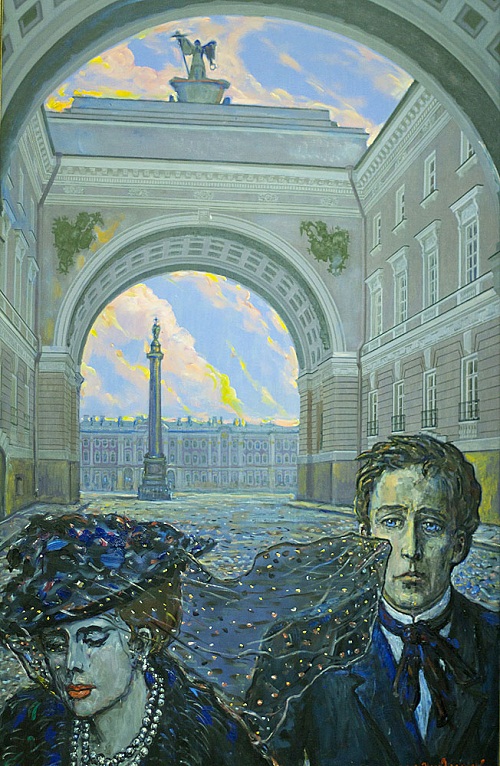 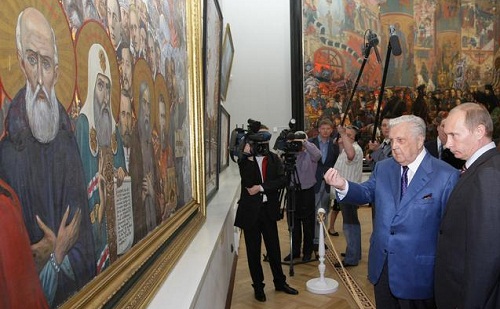 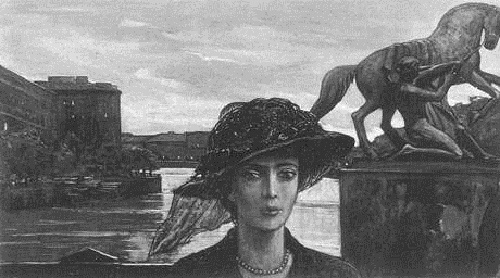 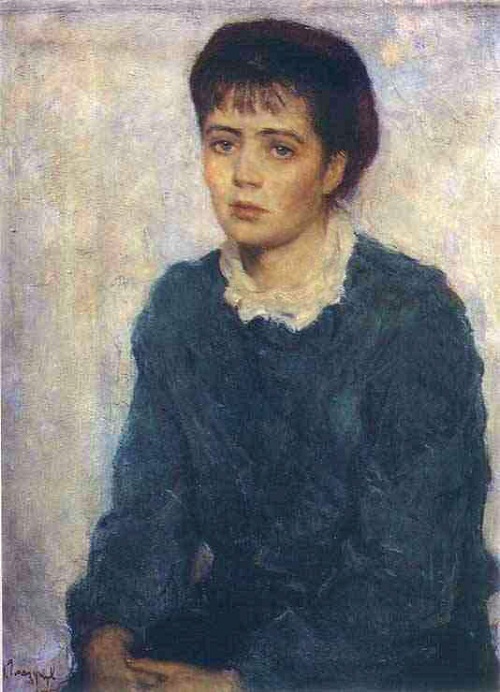 Nina. Portrait of the Artist’s Wife. 1955. Property of the author 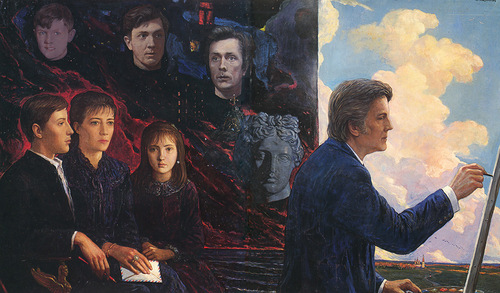 Self-portrait with his family. 1986. Oil on canvas 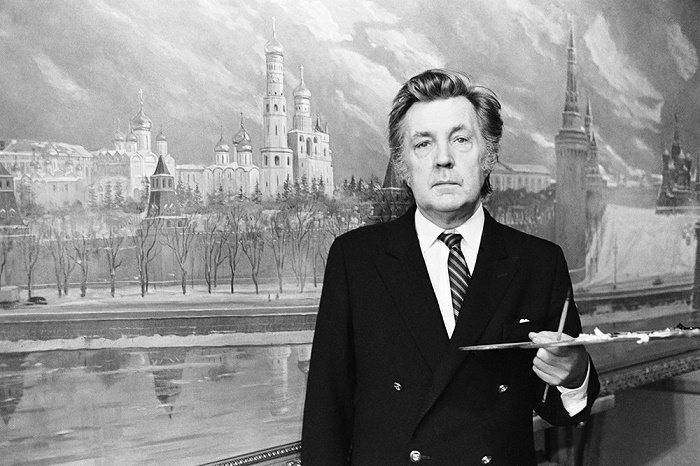 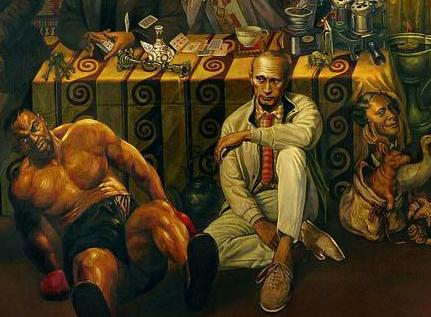 Vladimir Putin in painting of Glazunov