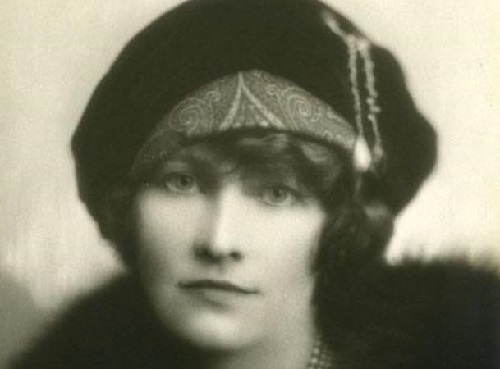 Beauty collector Marjorie Merriweather Post
Marjorie Merriweather Post valued beauty, elegance, graciousness, and spent her life literally among the treasures. During her life she owned the exquisite gardens, collections, and estate. The only child of Ella Merriweather Post and Charles William Post, she became the wealthiest woman in the United States at the age of 27, the owner of the $20 million cereal company, later known as the General Foods Corporation. She was married four times, and her third husband, the second US ambassador to the Soviet Union Joseph Davies brought her to the Soviet Russia. The couple lived in the Soviet Union from 1937 to 1938, under Joseph Stalin. Living in Russia, Joseph Davies and Marjorie Post, both collectors, acquired many valuable Russian works of art from Soviet authorities. She died at the age of 86, and now her collection, in all its splendor, is opened for the public’s enjoyment.
END_OF_DOCUMENT_TOKEN_TO_BE_REPLACED 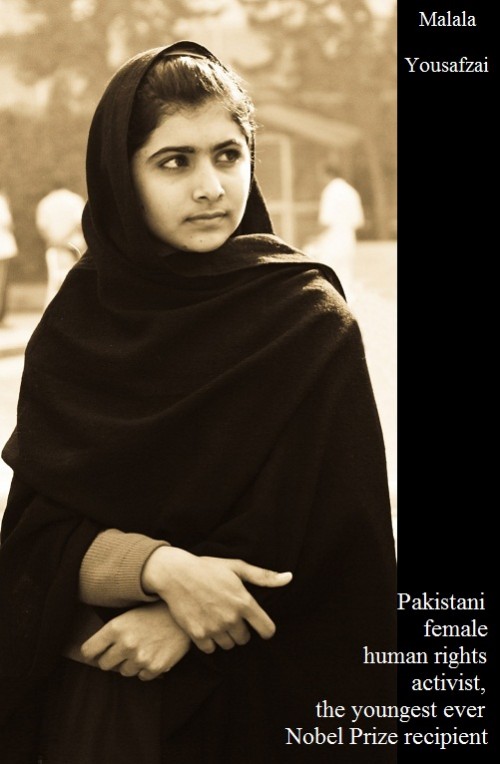 Youngest Nobel Prize winner Malala Yousafzai
Pakistani girl, human rights activist has received the Nobel Peace Prize in 2014. Thus, she has become the youngest ever Nobel Prize recipient. Malala became internationally known on October 9, 2012 when she was attacked by militants of the radical Islamic Taliban movement. Unfortunately, the girl suffered serious injuries to the head and neck, but survived and is now continuing her human rights activities. The Youngest Nobel Prize winner Malala Yousafzai born July 12, 1997 in the Pakistani city of Mingora in the Swat Valley. The girl’s name was given in honor of the Pakistani heroine Malalai – participants of the Battle of Maiwand during the Second Anglo-Afghan War. The name “Malal” is translated as “grief-stricken”, and the further fate of Malala Yousafzai proved that her name was crucial.
END_OF_DOCUMENT_TOKEN_TO_BE_REPLACED 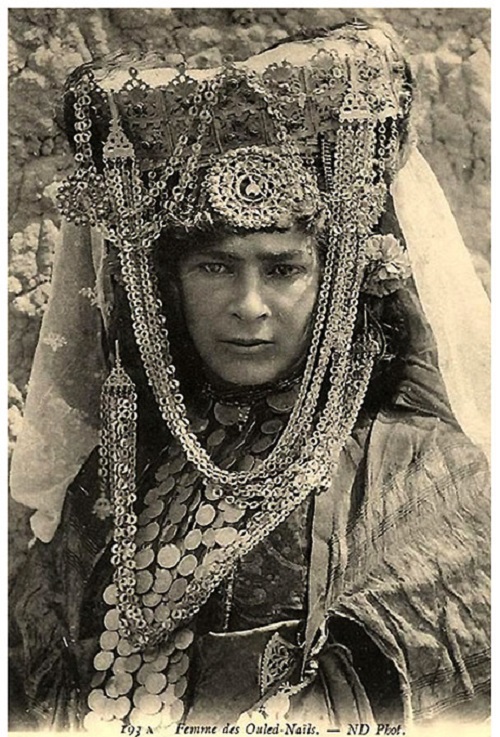 The Ouled Nail – Berber tribes living in the vicinity of the towns of El Djelfa, Bou Saada Chellala and the Ouled Nail Mountains, a part of the Atlas Mountains of Algeria. The origin of these tribes lost in the depths of history. And though they were converted to Islam in the 7-8 centuries AD, they were able to preserve their identity and uniqueness until the 20th century. Traditionally, women held the central role in the tribe. They did not wear traditional Muslim veil, moved freely across the expanses of their territory without a male escort, even in adolescence. Worked as a dancer. Accumulated sufficient condition to marry. They had independence even more than many “liberated women” today.
END_OF_DOCUMENT_TOKEN_TO_BE_REPLACED 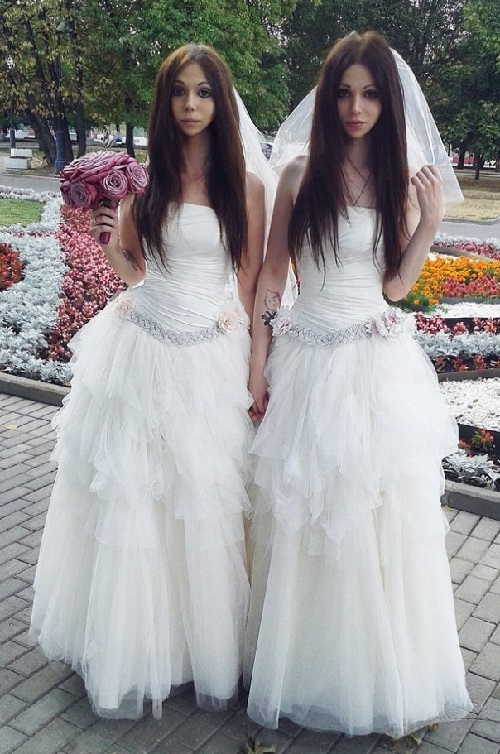 Can you guess who of these brides is a man? 6 August 2014, 23-year-old androgynous Dmitry Kozhuhov known throughout Russia as Alina Davis, married his beloved, known as Alison Brooks. The couple officially arranged an extraordinary wedding, as you know same-sex marriage in our country is strictly prohibited. Alison Brooks (left) Alina Davis (real name Dmitry Kozhuhov) (right) in wedding dresses. At first glance, in the photo above are depicted two brides, but among them there is one real bride – Alison Brooks. Her beloved – Alina Davis aka Dmitry Kozhuhov is a boy. The couple decided to marry extravagantly, appearing in a wedding hall in wedding dresses.
END_OF_DOCUMENT_TOKEN_TO_BE_REPLACED 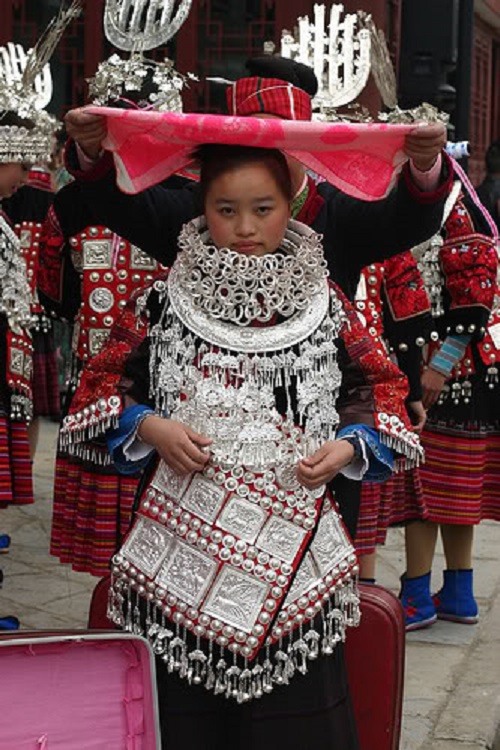 Miao women traditional silver jewelry. The Miao is an ethnic group from the southern China, Miao women prefer silver jewelry as a symbol of wealth. Their festive and wedding dresses is a manifestation of silver – silver costume of Miao women can weigh up to 20 kilograms. Traditional Miao jewelry set includes flowers, hat, comb, earrings, necklace and bracelet. Silver jewelry worn by the Miao, is very diverse. Simple decorations (solid hryvnia, necklaces and bracelets) are more massive and festive (flowers, hats, pendants made ​​of silver and horn) feature a fine work.
END_OF_DOCUMENT_TOKEN_TO_BE_REPLACED 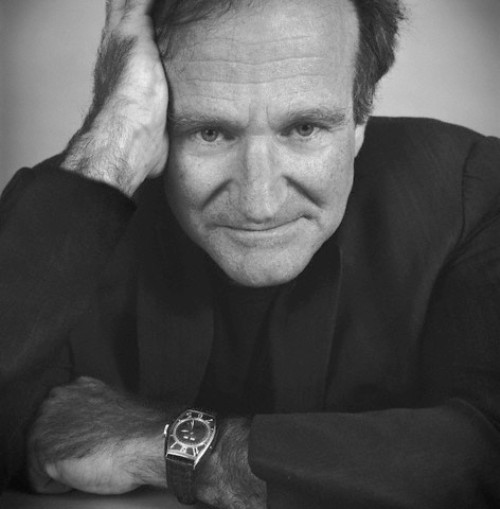 On the morning of August 11 at his home in Tiburon, California, was found dead Robin Williams. Rest in peace, We remember you, Robin Williams. To the actor equally well obeyed the drama and comedy. Williams was known for such films as “Mrs. Doubtfire,” “Dead Poets Society”, “The Fisher King,” “Jumanji” and “Insomnia”, “What dreams may come”, and for his work in the film “Good Will Hunting”, he was awarded the “Oscar” for Best Supporting Actor. Robin Williams was born July 21, 1951 in Chicago. There were no signs that the boy will become one of the most prominent comedians of the XX century. Mother – a former fashion model, his father – a manager at the Ford factory. In Robin intricately combined a variety of ancestors blood from Scotland, Germany, England, Wales, Ireland and France.
END_OF_DOCUMENT_TOKEN_TO_BE_REPLACED

Burch in one of her earliest necklaces made ​​from powdered metal and colorful threads. The photo taken in New York in 1971 near her apartment in Nob Hill. Beautiful jeweler and artist Laurel Burch

Beautiful jeweler and artist Laurel Burch lived in pain all her entire life, suffering more than 100 bone fractures as a result of osteopetrosis, a rare disease of bone fragility. Any push, fall could cause a fracture. In order to pay for housing and food, she was engaged in cooking, cleaning, sitting with the children. She was looking for a stable basis in order to maintain her fragile body. Without work, without money, without a dream she got to the Golden Gate in San Francisco. These were the famous 60th time hippies. Free spirit of hippi penetrated her art, her drawings are a direct reflection of the hippie culture. She described herself this way: “I live within the vivid colors of my imagination … soaring with rainbow feathered birds, racing the desert winds on horseback, wrapped in ancient tribal jewels, dancing with mythical tigers in steamy jungles.”
END_OF_DOCUMENT_TOKEN_TO_BE_REPLACED