Most unusual gold products. Gold has always been a symbol of luxury and wealth. But millionaires want to have not only gold jewelery. The most bizarre and expensive items made ​​of gold, for which rich people spend tens of thousands of dollars is a kind of modern gold rush. Sunny shine of precious metal attracts not only investors, but also masters of the originals wishing to implement insanely creative (or creatively insane) ideas from not cheap material. American jewelry designer Ken Courtney has released Nike sneakers made ​​of pure, 24-carat gold. Price of a pair of shoes is more than 5000 dollars, which perhaps is not large for passionate fans of the brand. But who would dare to jog in such sports shoes, I wonder.

To emphasize the status and viability you may purchase a first of its kind gold TV from LG. LG released the gold home theater Luxury Gold worth 132,000 dollars. To plasma television are attached covered with 24-carat gold-plated speakers, DVD-player and a subwoofer. Sound power is 500 watts. 71-inch gold TV supports Full HD. It has a resolution of 1920 x 1080, 1000 cd/m2 brightness and 1500:1 contrast ratio. Gold LH-C643 TV-set was first introduced at the Korea Electronics Show 2006. This home theater – a real luxury item. 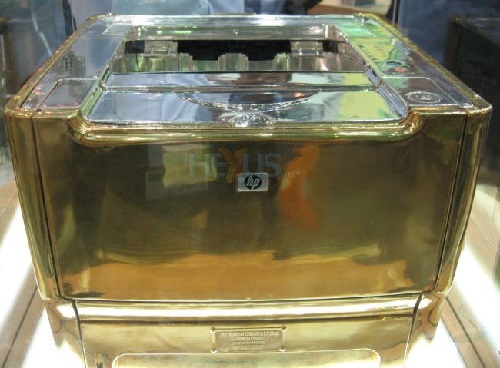 First gold printer was introduced by Hewlett-Packard in Dubai at GITEX 2006. Corpus of the most expensive and luxurious printer overlaid with pure 24 karat gold. Although the LaserJet P2015 printer is a fairly standard model without any bloat. This black-and-white laser printer prints documents at up to 1200 dpi on paper A4. It has automatic input tray up to 300 pages, and print speed of 21 pages per minute. There is also the possibility of manual paper feed. Paper Output Tray has a volume of 125 pages. The printer connects via port USB 2.0. In general, it is quite reliable and easy to use. This model was released for promotional purposes and auctioned at a starting price of just $ 300. Of course, the initial cost is significantly increased, and finally, the printer was sold for 20,000 dollars. 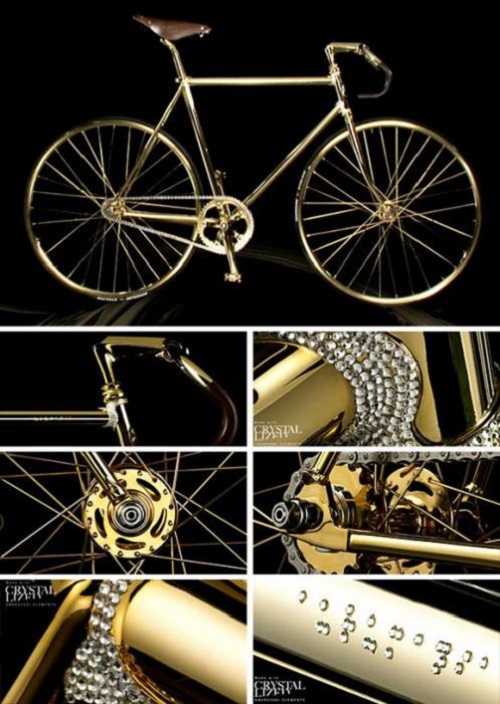 For those who do not have enough money to gold car, no driver’s license or just for wealthy cycling fans Danish company Aurumania has released a series of 10 gold handmade bicycles. Each bike is covered with pure 24-carat gold and encrusted with 600 Swarovski crystals. Bicycle saddle is decorated with genuine leather, and all the parts are made by hand. The very same bike with a cost of 80,000 euros (more than $ 100 000) was the most expensive bike in the world. Realizing how difficult it is to find buyers for such a luxury item, the manufacturer offers a 10 year warranty and delivery of this miracle anywhere in the world. The first buyer of gold bicycle became a resident of England. 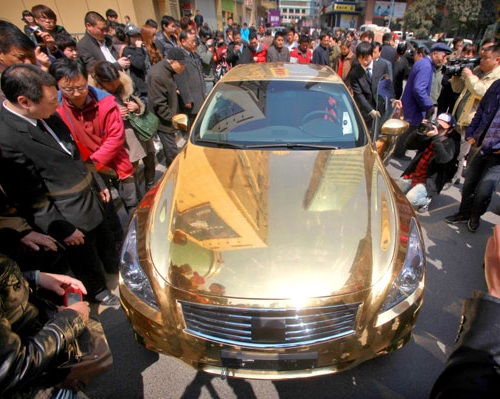 Jewelers from the Chinese city of Nanjing gold plated Infiniti G37 car and parked it near the jewelry store. Luxury car long attracted the attention of onlookers, but due to lack of license plates, it was safely evacuated far away. So, jewelry advertising has failed. 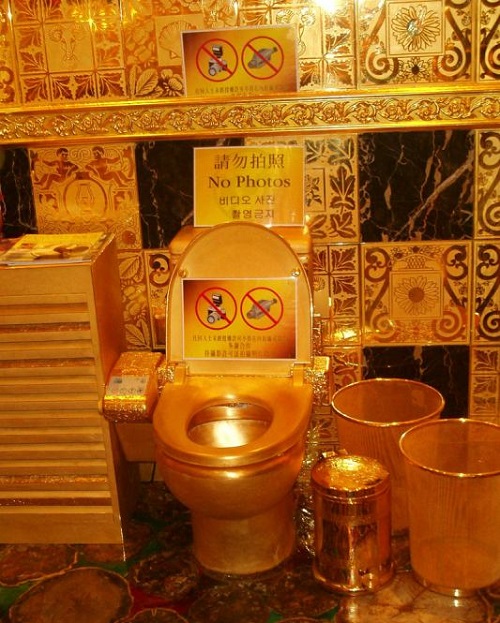 Today, to the dazzling creature of designer Lam Sai Wing, gold toilet, rushing crowds of curious tourists from around the world to capture this creation on camera. The miracle of plumbing weighs 999-ton and costs $ 37 million, bathroom accessories also made of gold and encrusted with precious stones. 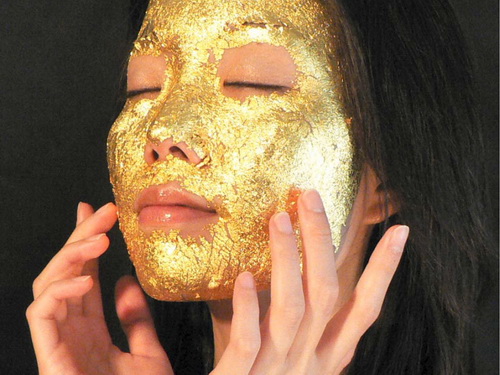 Japanese beauticians offer its customers not only enjoy elegant gold ornaments, but also treat themselves with a truly golden procedures. Generally, gold has been used since ancient times, for example, in India it has been used in diseases of the heart, in ancient China – for medicinal purposes. 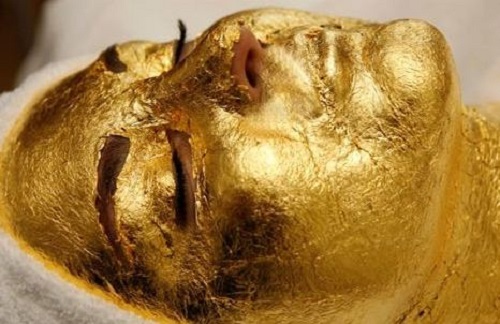 Japanese beauticians make rejuvenating gold mask of pure gold, which stops the aging process, bleach, revitalizes the skin surface, smooths wrinkles, makes it fresh and supple. The cost of one mask is about two hundred and fifty dollars, and if the whole body – two thousand dollars, the average duration of the procedure – a half an hour. 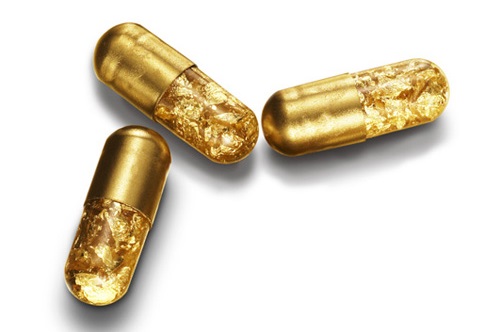 But now gold is not only used in cosmetics and anti-aging preparations. For those who already do not know how to spend money, designer Tobias Wong invented tablets of gold «Golden Pills». Capsules of 2 centimeters in size filled with 24-karat gold powder and covered with a thin gold shell. It is still not known whether these golden tablets have any healing properties. The gold pills for $ 425 a piece. 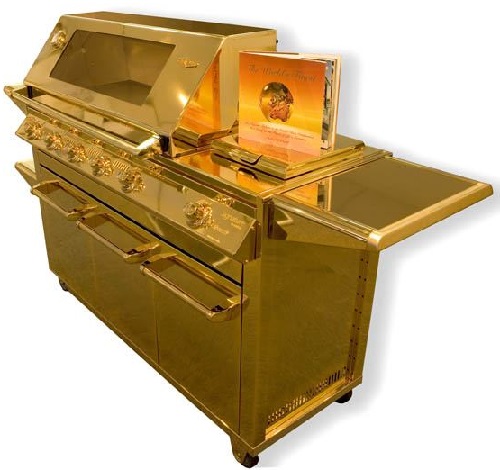 The barbecue gas grill of gold, worth 165,000 dollars. For those who love luxury and want to enjoy cooking, the Australian company producing grills BeefEater made ​​the most expensive barbecue, completely covered with pure 24k gold (except working surfaces). Golden gas barbecue grill Signature SL Gold is of fine quality and functionality. Grill has 6 burners high power, a powerful extra side burner, electric spit, metal cap with a thermometer and a large fire-resistant glass. Barbecue grill itself is made of stainless steel, and its surface is coated with gold. 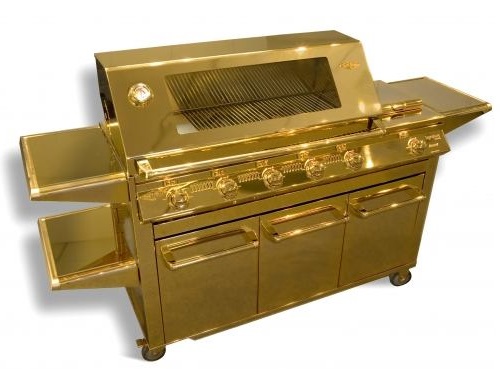 First it was a barbecue for the exhibition Sydney Home Show, which took place in 2008. Then the value of the gold barbecue was 60 000 dollars, but then the price has increased to 165,000 dollars. And due to the fact that the price for gold is constantly going up, it may be a good investment. 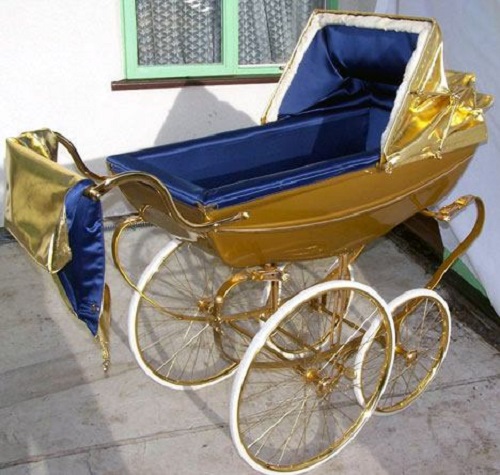 British designers Graham Richardson and Alison Murfet offer caring parents to buy a gold-plated baby stroller of twenty four carat. In 1877 gold carriages were made ​​for children of the richest families in the world. Design duo decided to revive this tradition by making a gold carriage. All items in prams Silver Cross Silver Shadow are covered with 24-carat gold, stroller itself is made of genuine leather and trimmed in satin. In addition, there is a built in stereo wheelchair. This vehicle is intended for future oligarchs, as its cost is 12,000 dollars. Incidentally, the first golden carriage has already been sold to a businessman from South Africa. 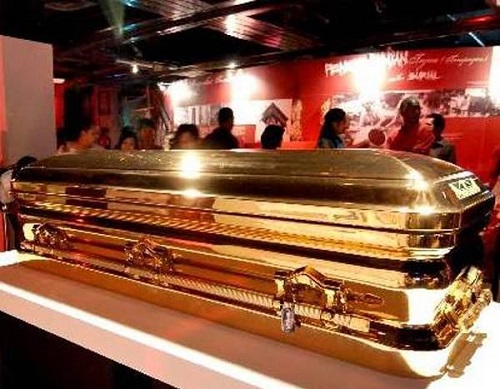 The golden coffin was exhibited in the National Museum in Kuala Lumpur. This Chinese coffin is similar to the gold-plated coffins of world celebrities Michael Jackson and James Brown. Coffin covered with gold, has silk lining and some features, such as the ventilation system and the lock on the case, if someone wants to try to lie in a coffin while still alive. The coffin costs half a million of dollars. People believe in life after death, but it seems that some are looking for luxury for the next life. 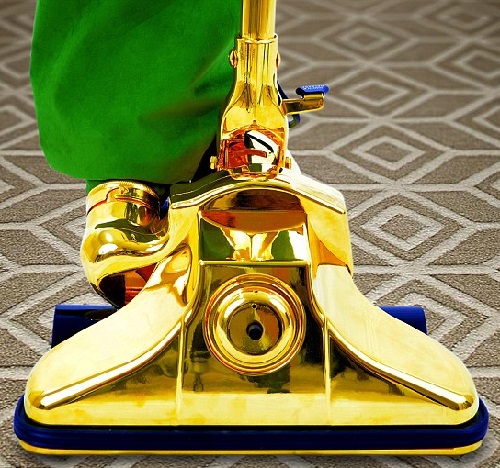 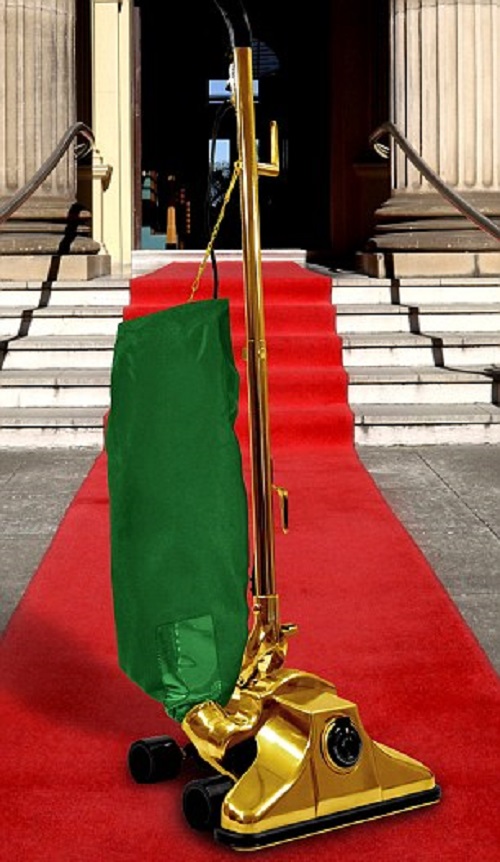