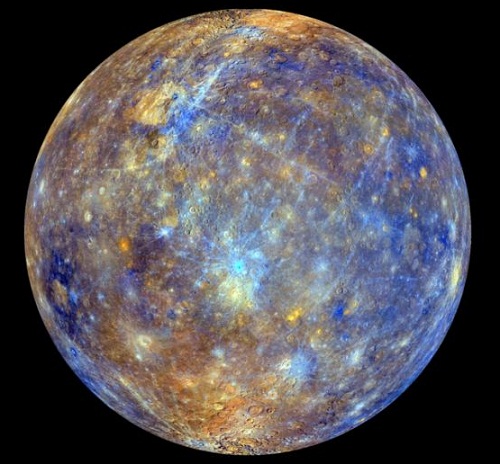 The planet Mercury in reality is brown, colors were produced by putting together thousands of of NASA’s images of Mercury surface, Space Environment, Geochemistry, and Ranging (Known as Messenger) spacecraft, which is in orbit around the innermost planet. Engineers used eight color filters on the spacecraft’s camera to accentuate real color variations that are linked to the composition and texture of materials on the surface. Areas with a redder color appear red, and areas with a grayer color appear blue. Young crater rays, arrayed radially around fresh impact craters, appear light blue or white. Color variations on Mercury’s surface are subtle, and to the human eye Mercury would appear to be varying shades of dark brown,’ Nasa said. 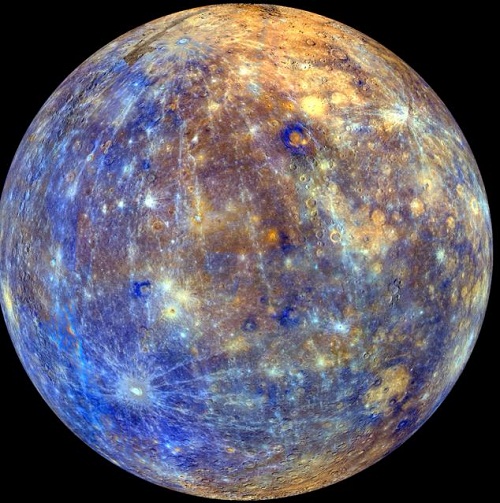 The images were created using a mosaic of pictures from Nasa’s messenger spacecraft, which were then combined to create a video ‘flyby’ of the planet 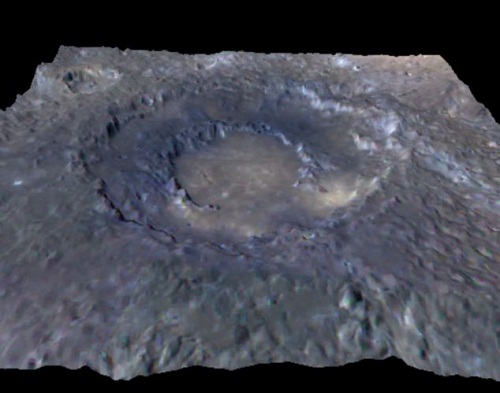 The images reveal giant craters on the surface of Mercury seen in unprecedented detail. This basin’s outer rim is about 306 km in diameter and the inner (peak) ring is about 140 km in diameter

The project is part of a global color map that covers more than 99% of Mercury’s surface with an average resolution of about 1 kilometer per pixel. The view here is what an observer would see from high above the equator. These color images of Mercury’s surface were obtained when the spacecraft was viewing Mercury with the Sun overhead, so shadows cast by topographic features are barely visible. Other image mosaics of Mercury were taken with the Sun low to the horizon, creating shading to accentuate topography.

Unlike Nasa’s Mars rover Curiosity, which will be sampling rocks and soils to look for organic materials directly, the MESSENGER probe bounces laser beams, counts particles, measures gamma rays and collects other data remotely from orbit.