Matthaus Schwarz founder of fashion from XVI century
German accountant Matthaus Schwarz (19 February 1497 – c.1574) not only kept a diary of fashion – hundreds of watercolors, which he chronicled in a particular dress, but also made the first set of “rules of the clothes” – on the combination of colors, functionality, fitness for a particular event. Already in the XVI century, he laid the foundations of what we now call “fashionable.” Historians believe the book of Schwartz is most unique cultural product of the last centuries. The German for 40 years, from 23’s to 63 years of age, step-by-step captured all his life. More precisely, in this he was helped by the artists, whom he hired to sketch his wardrobe or living condition. Best known for not less than 137 watercolors of his face, and the list is updated from time to time with new finds. In fact Matthaus Schwarz was the inventor of the concept of “bow” of the fashion popular among the current hipsters – narcissistically taking pictures of themselves every day.

Schwarz’s book of drawings is stored in a small museum in the German city of Braunschweig. It has not yet been valued. Only English fashion historian Ulinka Rublek has recently taken up the study of this collection of drawings. The result became her book “Cultural Identity in Renaissance Europe.” One of her discoveries was that in the elegant XVI century were not only rich, but also, as it would be called today the “middle class.”

A typical representative of the “middle class” was Schwarz. He worked as an accountant at the Fugger merchant family, one of the richest and most influential German families of the time. He began sketches of himself and in 1520 – at the age of 23 years old. First watercolors – retrospective drawings from birth. Including them, from 23’s to 63 years old three artists made at least 137 images of Schwarz. 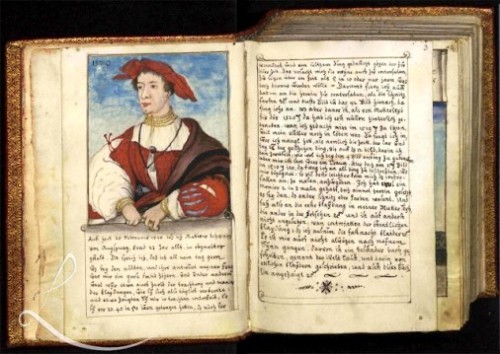 Schwarz lived at the turn of the times – at the beginning of the Reformation, which differed in severity of manners. He had to vary the details of the toilet to look at the same time not too extravagant, but at the same time fashionable. Schwarz played with style, types of scetches and sewn with flowers and accessories. Sometimes, in addition to the suit was jewelry. 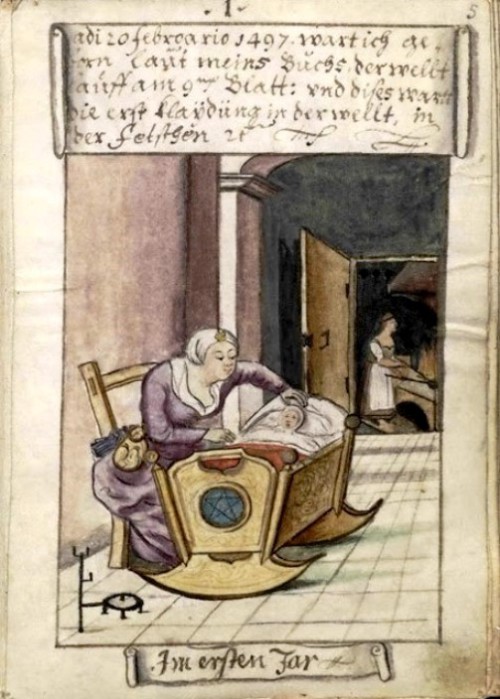 The birth of Matthaus Schwarz. The five-pointed star in the crib – ward off evil forces of the time

From time to time he had to come up with the replacement of any part of the toilet. When, in his hometown of Augsburg was banned codpiece, Schwarz began applying designs on tights in the groin area – stylized “organ”. Clothing of various colors characterized the specific mood and meaning. In his youth he loved the white color, which meant the faith and humility. One day following the right color brought him a big favor. He was a complex of red-yellow outfit – the colors of the Holy Roman Emperor Charles V. Schwarz remained faithful to Catholicism, and when Charles V defeated the Protestants in Augsburg (after 9 years of their rule in this city), the Emperor was told of a young man, who remained loyal to him all these years. A young accountant on the proposal of Charles V received a major boost in trading firm Fugger. 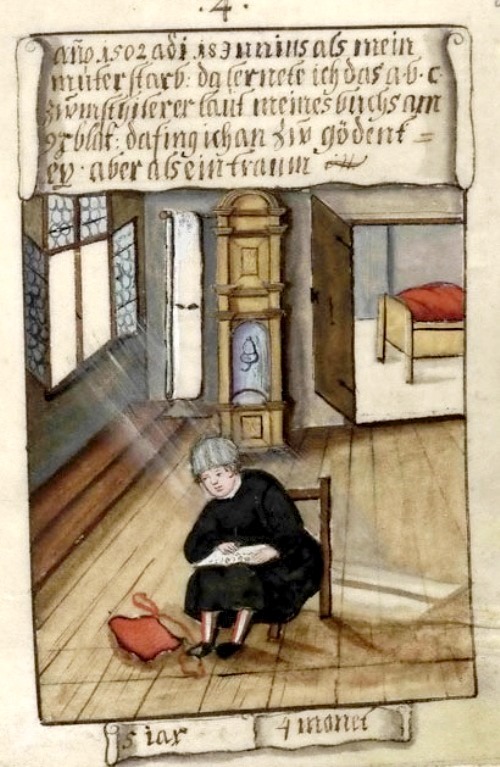 In this drawing Matthaus is 5 years and 4 months old

At age 52 Schwarz suffered from a stroke, and this limited him in many trendy things – light cloaks, bright accessories. Matthaus began inventing a distinct style that would now is called “business” – dark and thick fabrics, simple cut. At first it was called “Spanish” – the faithful people of this country wore it, but Schwartz added solemnity to it.

Schwarz died at the age of 77 (in 1574). At 63 years old, semi-paralyzed, he took a promise from his son Conrad, that he will continue his project. But his son only regretted his old age, because of the condition in which Matthaus was. Schwarz spent on clothing about 30% of his wealth. After his death, “a book of fashion” in his family passed down from generation to generation. During the World War II a part of the drawings was lost, and there is a theory that there should be not 137, as it is now, but up to 300 sheets. 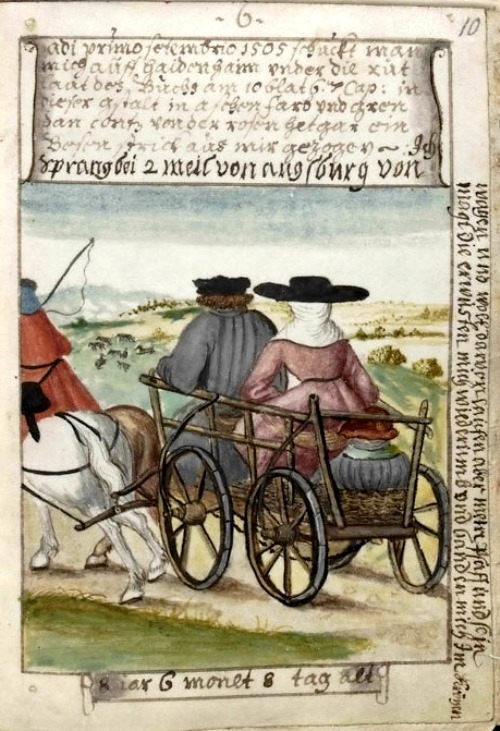 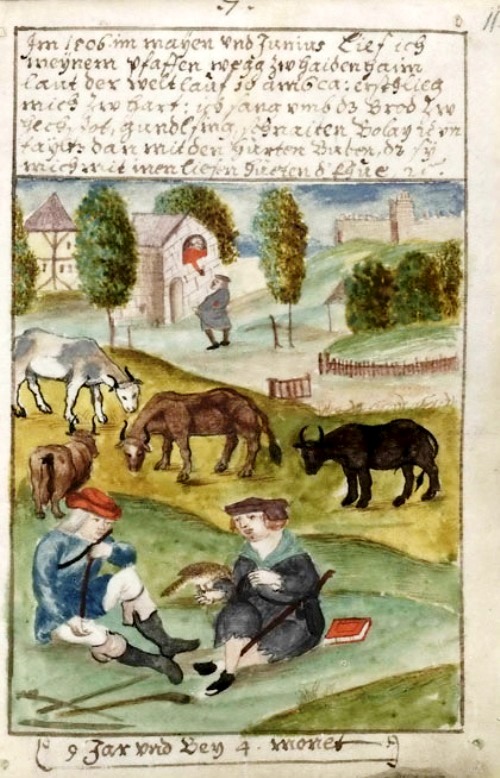 9 years and 4 month-old Matthaus with a friend 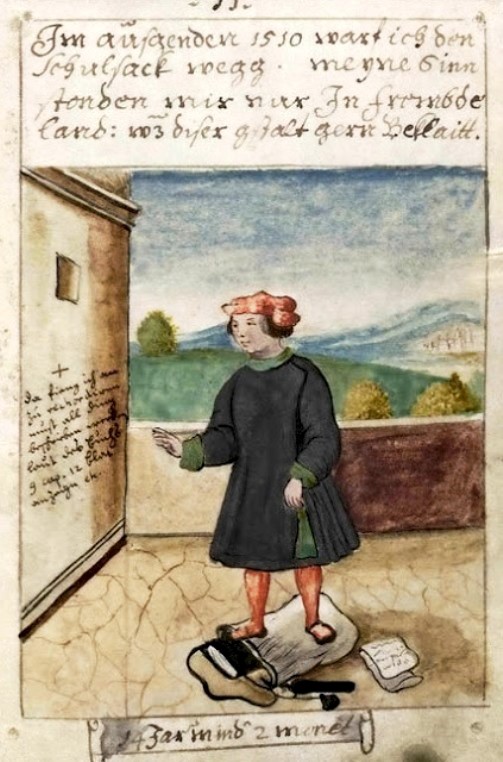 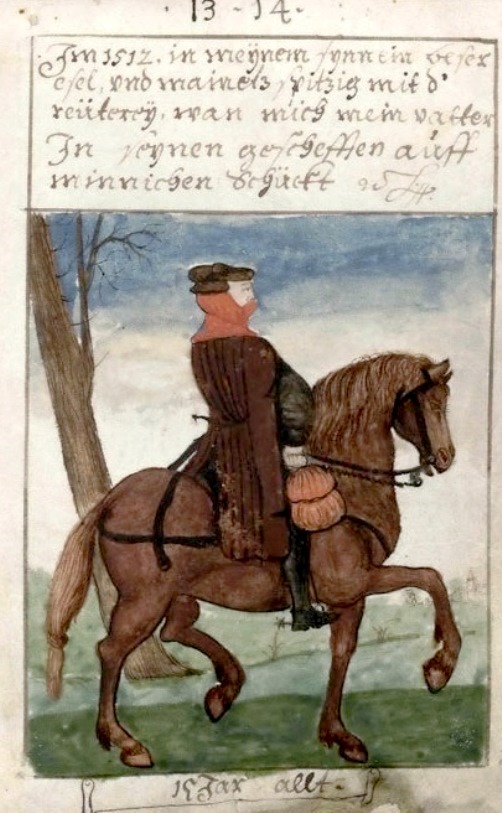 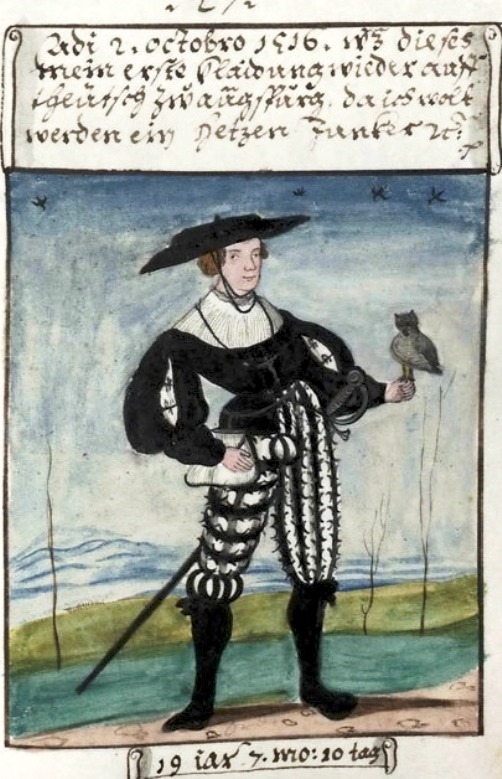 19 years and 7 months old. Schwarz is in the fashionable suit with codpiece 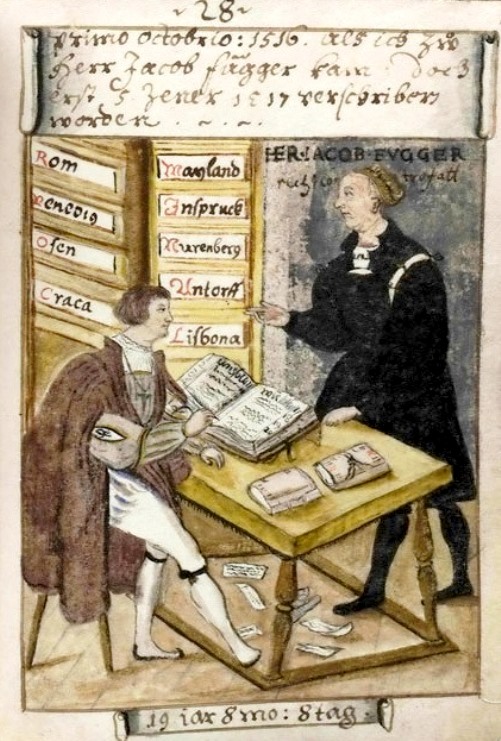 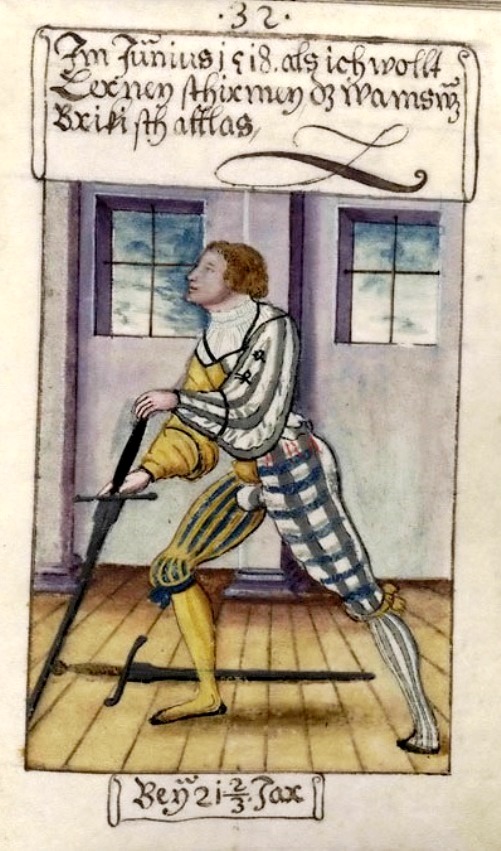 21 and 8 months old Schwarz. Note the bold combination of colors in a suit 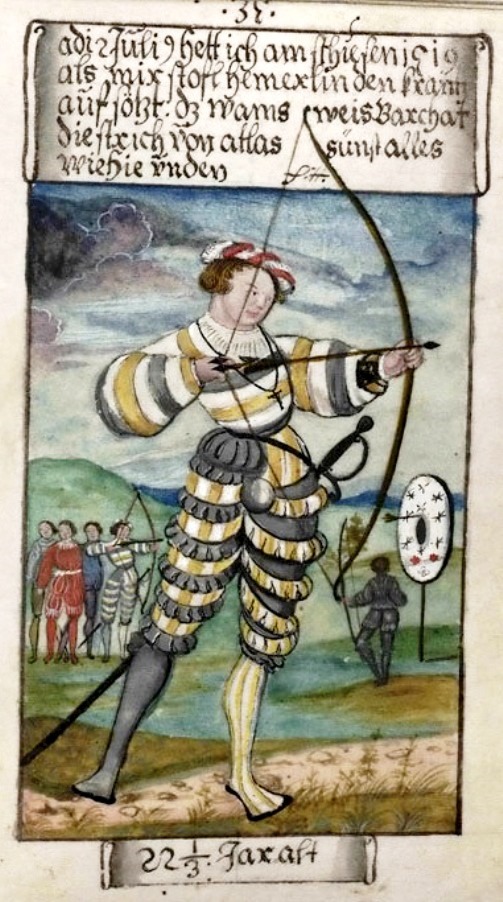 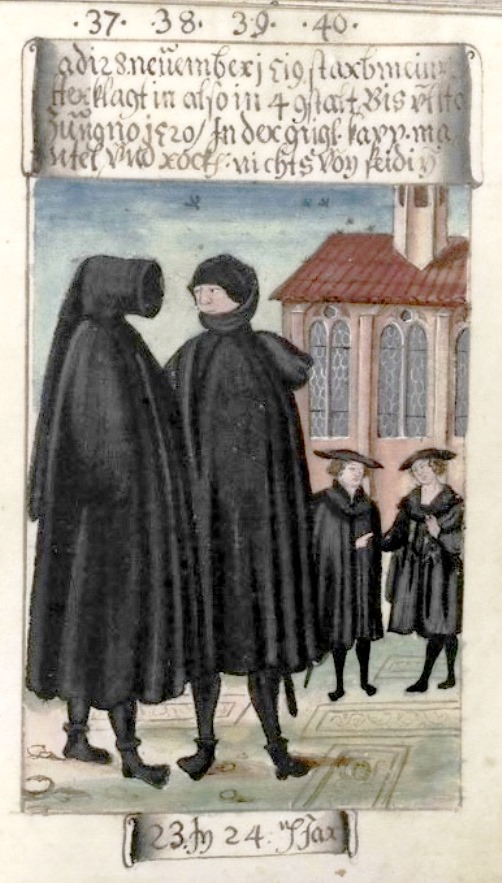 Three of his relatives and Schwarz, mourns the death of his father 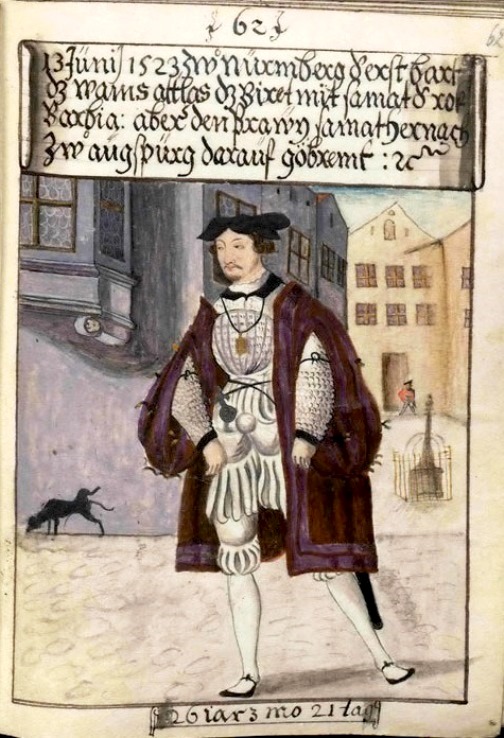 26-year-old Matthaus on a business trip visiting Nuremberg. Pay attention to the money bags on his belt 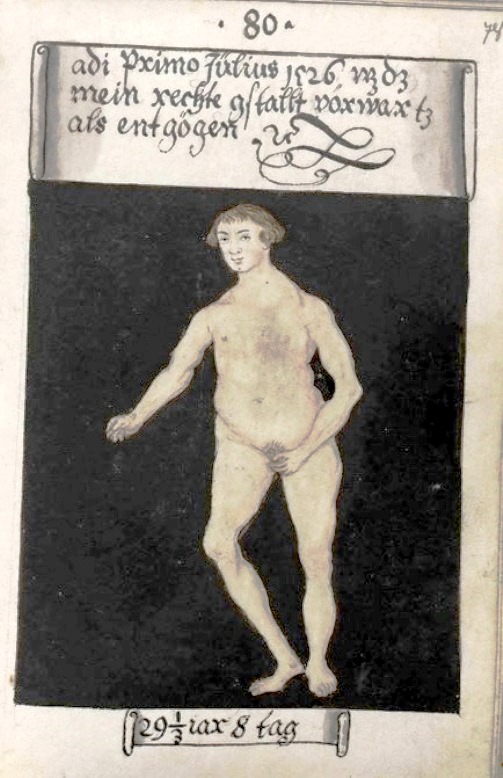 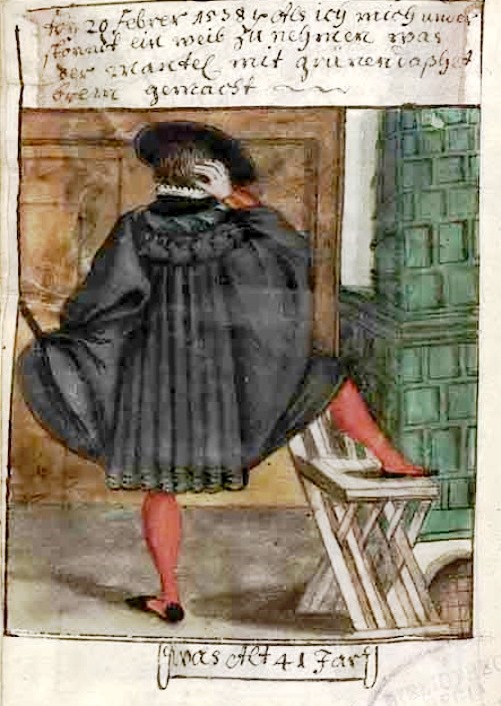 Spanish style’ of the business men of the time, whom Schwartz made ​​fashionable. Here he was in ’63 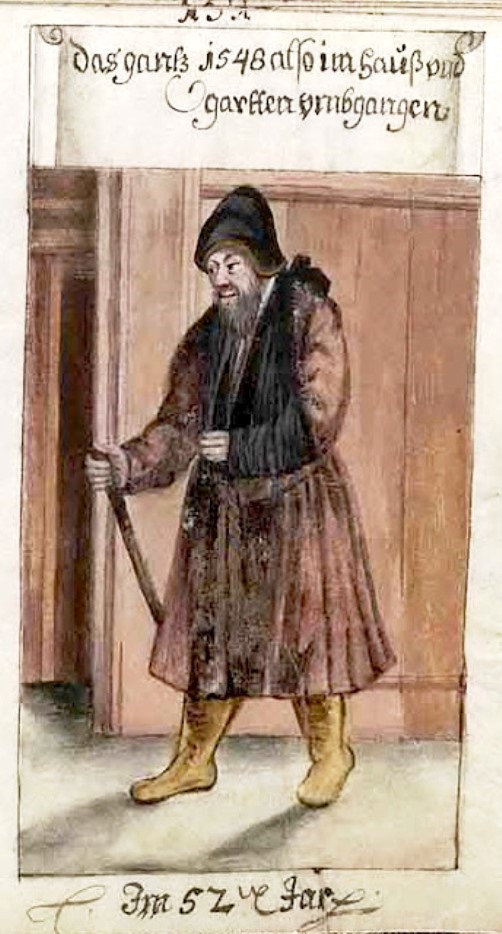 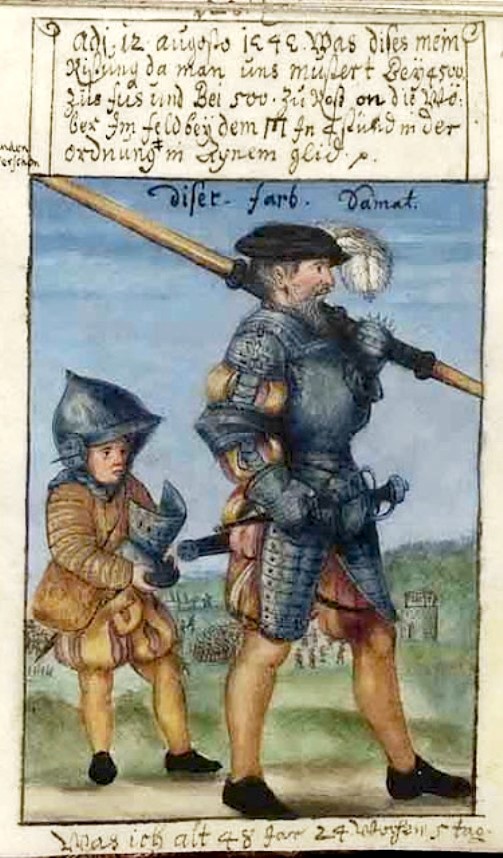 Schwarz with Squire. He is 48 years old 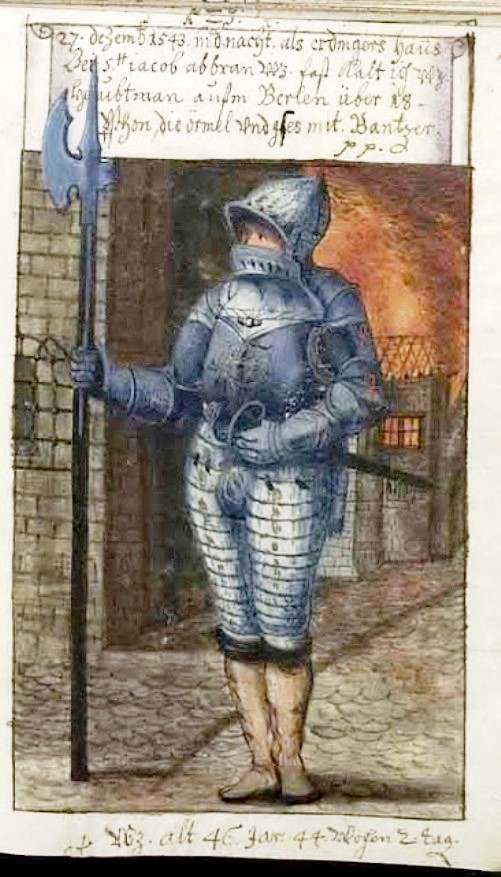 Schwarz in the battle for the Emperor Charles V. Here he was 46 years old