« Cave in Pang Mapha-Thailand
Lakes with water of amazing colors » 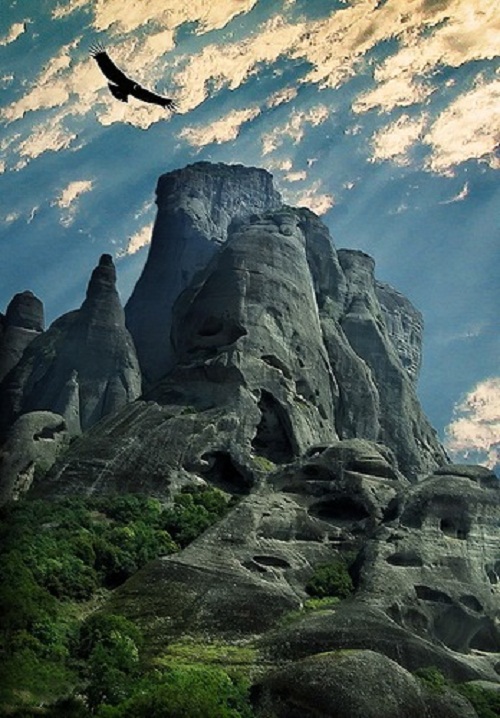 Monasteries of the Holy Meteora in Greece
There are amazing places on earth, where the heavenly grace incomprehensible combined with the beauty of creation, and the wealth of the gifts of the earth with a height of selfless spirit. This is the Holy Meteora – Mountain monastic country, second only to the Holy Mountain of Athos center of Orthodox monasticism in Greece. Rock-stone giants majestically frozen between the earth and the sky. Meteora is Greek for ‘suspended in the air”. This word indicates a complex of monasteries and hermitages, which indeed suspended in the sky.

Before 1920 few visitors came here or climbed the rickety and unsafe ladder height of 30 meters, and even more (those stairs at the slightest danger pulls up), if any, to make to lift the rope, swinging at a dizzying height of braided rope net.

Meanwhile, monaks use such nets to this day. In addition, it is possible to get to the monastery by serpentine steps cut into the rock and thrown over the bottomless abyss rickety suspended bridges. 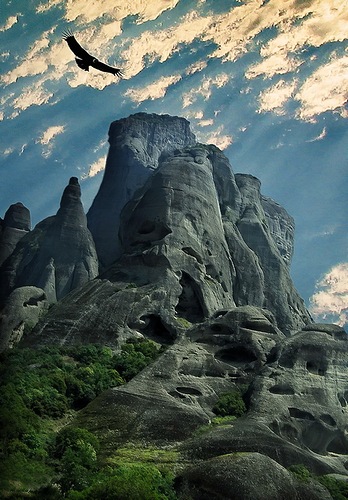 Many monks, fearing frivolous intrusion of worldly life in ascetic monastic life, left their cells and today Meteora – is more a museum than a monastic community.

From the very beginning of Christianity to serve God in the desert, abandoned places, away from the temptations of worldly vanity and everyday life is becoming one of the main elements of this religion. 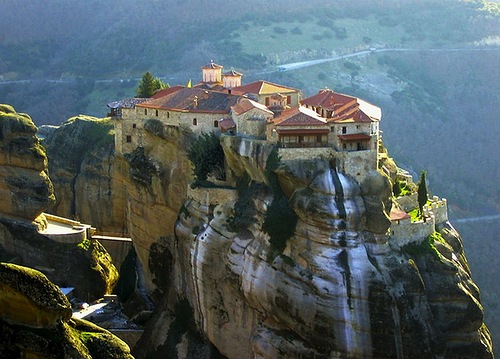 Hermits started to settle in the caves on the steep slopes of the Pindus in the XII century. But the founder of two major monasteries – Gega Meteoron and Magali Meteoron – monks of Saint Athanasius of Mount Athos lived here only about 1360.

The Great Meteoron (a.k.a. Monastery of the Transfiguration of Christ) is the highest, largest and oldest of the six monasteries of the Meteora. 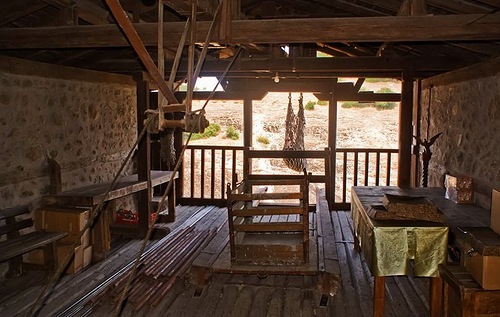 Founded in the 14th century by a monk from Mount Athos, the Great Meteoron is still impressive and important today. If there is only time to visit one monastery in the Meteora, this is the one to choose.

It has a small cruciform plan church. The small chapel of St. John the Baptist, carved into the rock, contains frescoes from the seventeenth century. It was richly decorated and had precious manuscripts; however, these treasures were looted during World War II. The monastery appeared in the 1981 James Bond film “For Your Eyes Only”. 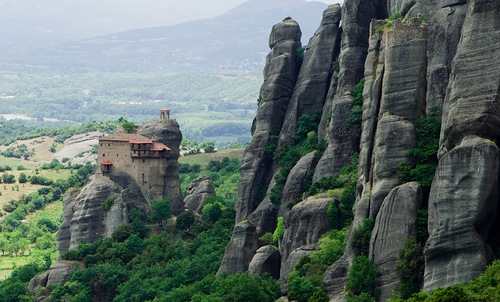 However, the reason for the monastery’s name is unclear. According to some sources, it was dedicated to St. Barbara. But other think it reflects the name of a hermit who occupied the rock. Anyway, it became subject to Varlaam Monastery by 1614.

Meanwhile, the monastery once again fell into disrepair for the two centuries prior to the 1940s, when the Germans damaged it in World War II. 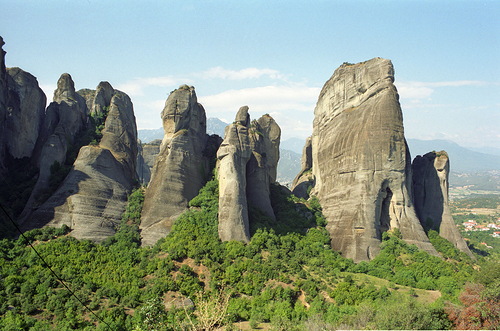 Fortunately, the regional archaeological service later repaired it and since 1988 a small community of 13 nuns occupied it.

Founded in the 14th century by a monk from Mount Athos, the Great Meteoron is still impressive and important today. If there is only time to visit one monastery in the Meteora, this is the one to choose.

Varlaam Monastery (or Barlaam Monastery) in the Meteora, named after the monk who first built a tiny chapel on this rocky promontory in the 14th century. 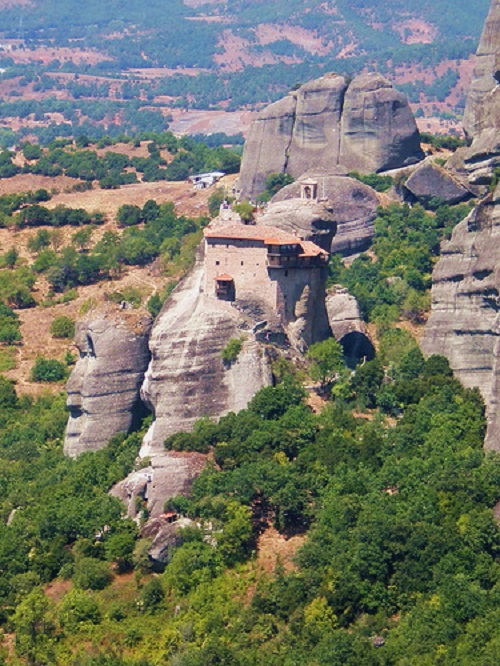 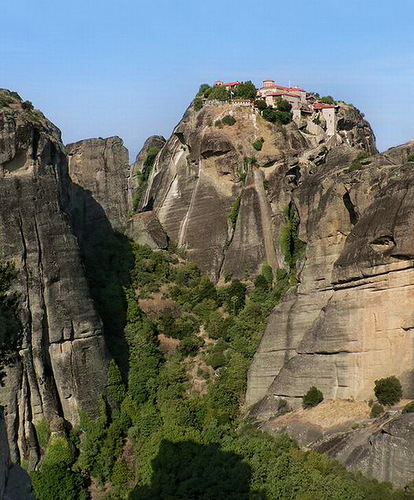 Monastery of the Transfiguration of Christ, the highest, largest and oldest of the six monasteries of the Meteora 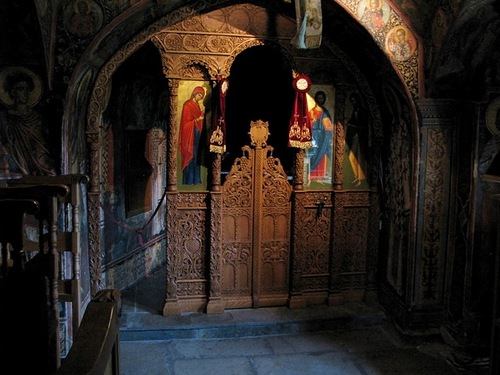 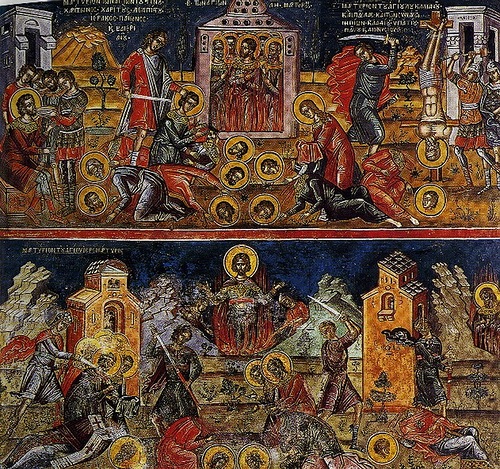 Decoration and frescoes Inside the monastery 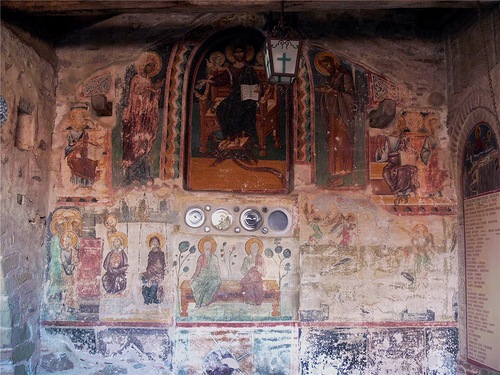 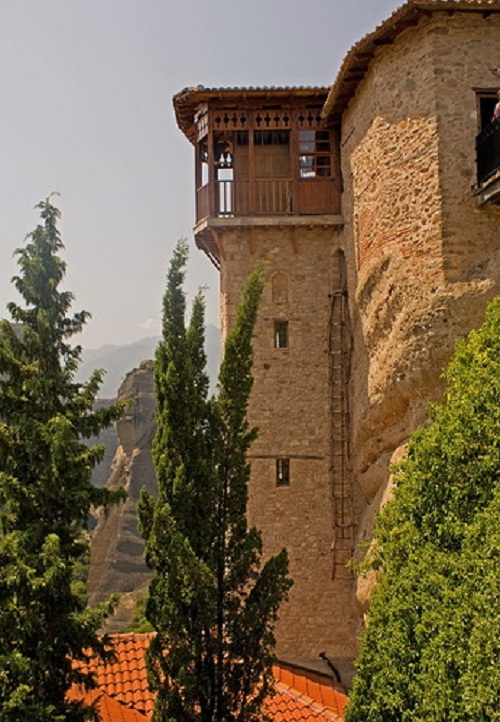 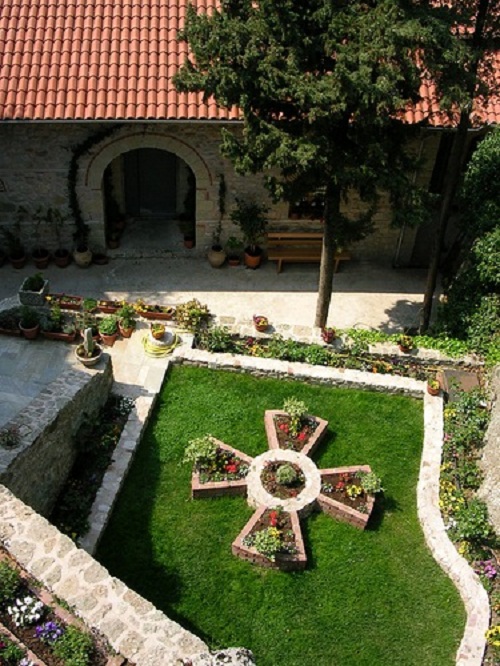 Rousannou Monastery, founded around 1545 by Maximos and Ioasaph of Ioannina 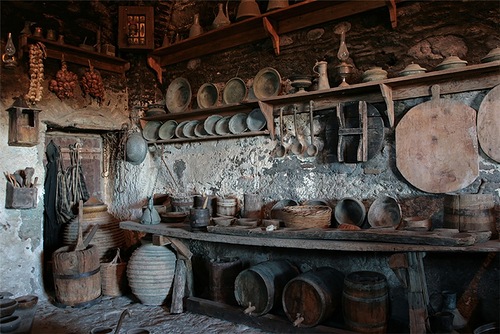 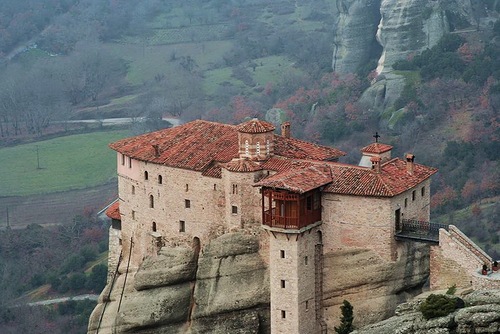 Built on the rocks monastic country 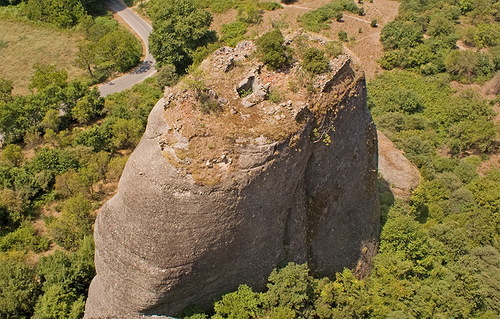 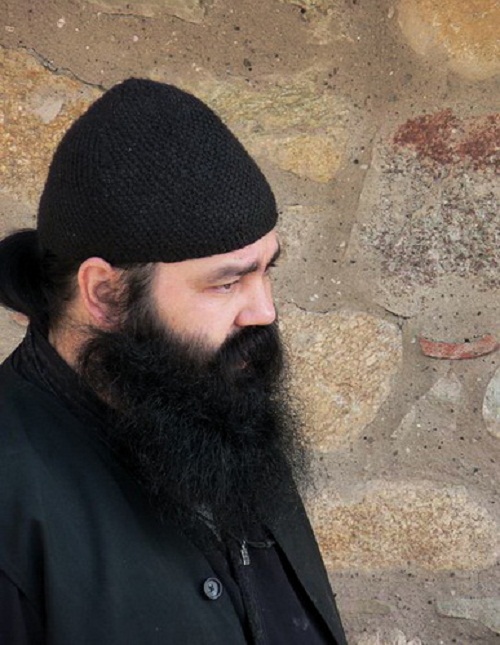 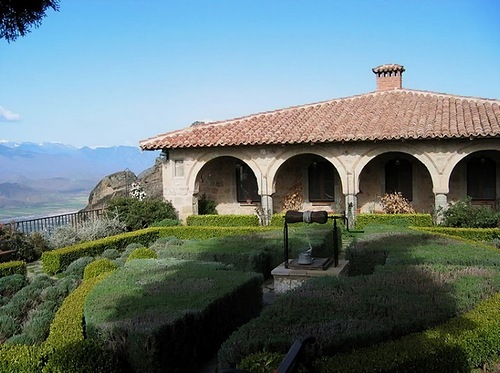 One of the buildings of monastic community 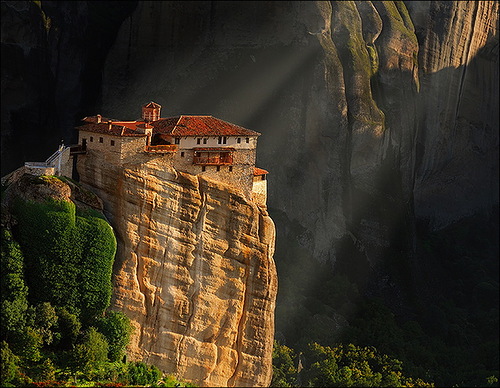 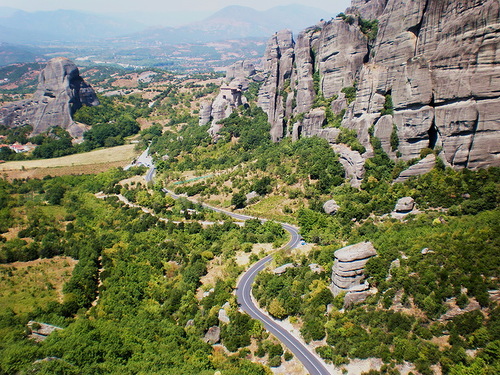 The road to Holy Meteora 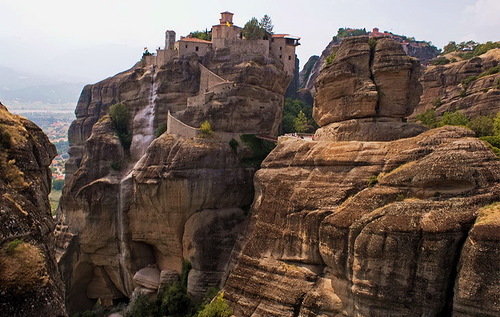 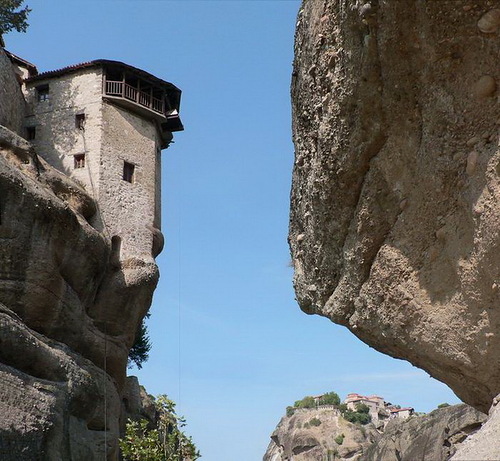 Standing on the edge monastery 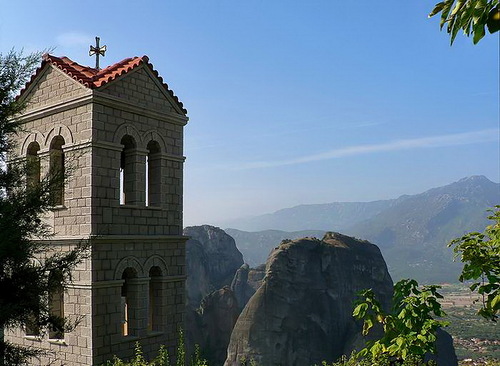 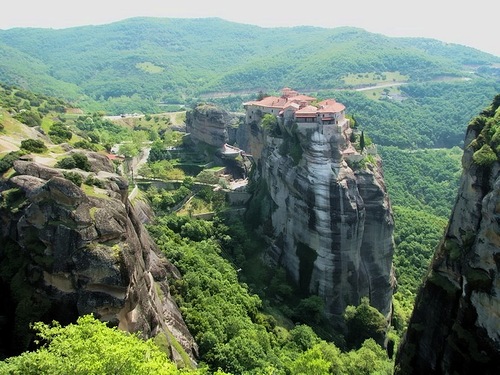 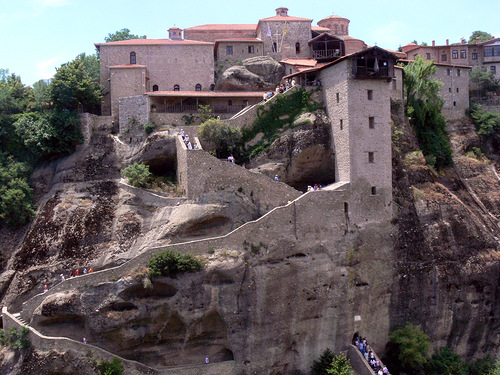 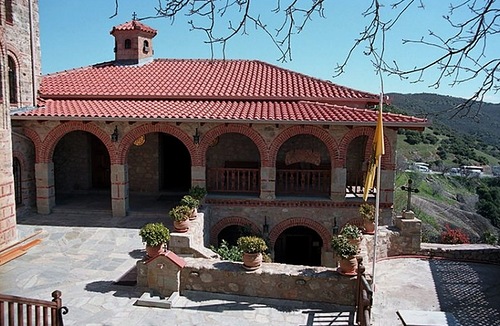 The yard of the monastery 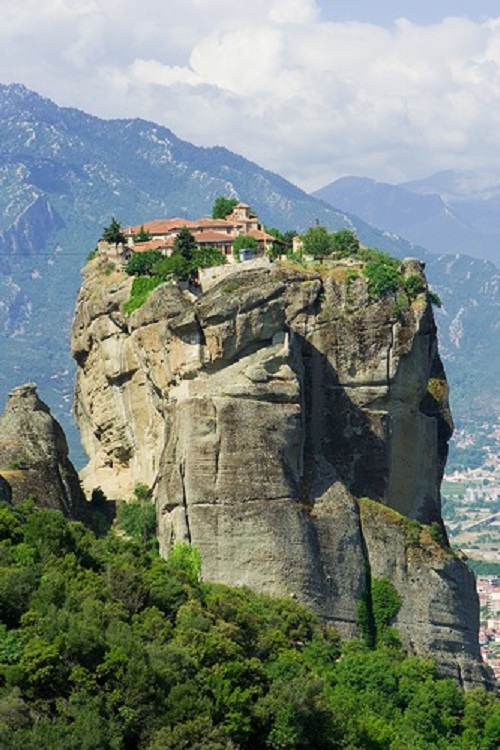 Standing on a high mountain monasteries 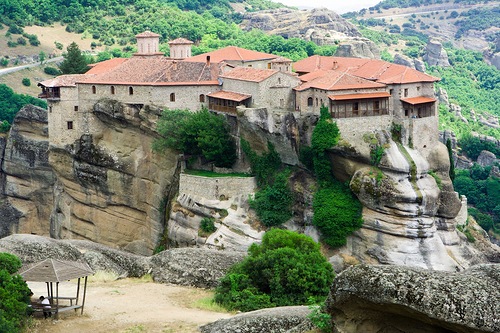