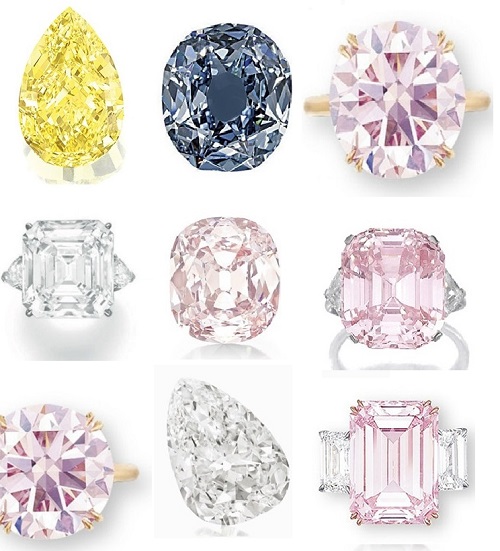 Most expensive diamonds sold at auctions. Auction house Christie’s held jewelry auctions on May 15, 2013 in Geneva, which the biggest star was the pear-shaped diamond weighing 101.73 carats. Unique stone, which experts of Gemological Institute of the United States assigned category D color and the status of the “perfect”, considered among the most advanced in the world of diamonds. It was put up for auction for the first time. Its next owner was able to name the stone its name, thus entering into the history. Estimate diamond disclosed only upon request, and, most of all, it has been exceeded several times. The final price was a huge amount of 25.8 million Swiss francs (more than $ 27.2 million). Forbes compiled a list of 10 unique stones that can compare in beauty and price. 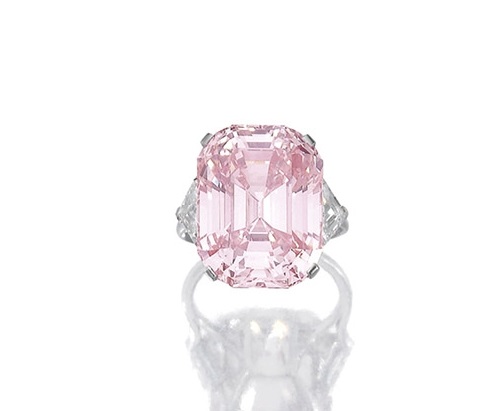 To date, the first line in the list of the most expensive diamonds in the world is “Graff Pink” sold in 2010 at Sotheby’s for a record $ 46 million. The owner of jewelry became famous jeweler Laurence Graff, the official supplier of the British royal court. The history of diamonds is known only from the middle of the last century. No one knows where or when the stone was quarried. The first known owner was a diamond jeweler Harry Winston, who acquired it from an anonymous collector, and later resold. Until 2010, the stone was kept in a private collection, and then was put up for auction Sotheby’s, where it was bought by Laurence Graff. Interestingly, over the past 60 years, the diamond remained nameless, and got its name after the new owner – Graff. Stone has classical cut with rounded corners and weighs 24.78 carat. 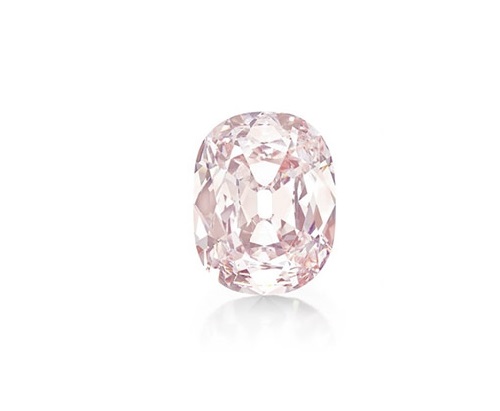 Less than a month ago at an auction at Christie’s in New York a unique pink diamond “The Little Prince” was sold. The total price of stone was $ 39.3 million, and its buyer, a seller on the phone and wished to remain anonymous. “The Little Prince” was discovered over 300 years ago in the famous diamond mines of Golconda in India. One of its owners was the ruler of the city of Hyderabad, which still remains one of the biggest jewelry centers of excellence in the country. Osman Ali Khan in 1937 was named by Time magazine the richest man in the world. But after the Second World War, his financial situation deteriorated, and the unique pink diamond weighing nearly 35 carats in 1960, was offered for sale at auction Sotheby’s, where it was purchased by jewelry house Van Cleef & Arpels. More than half a century about the stone was not heard until it again did not go under the hammer in April 2013. 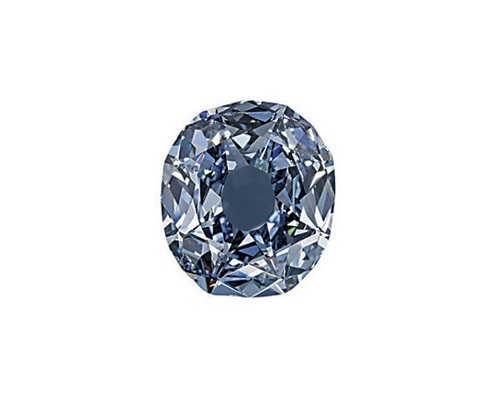 “Same age of Bavarian kings,” “Crown of the Wittelsbach diamond”, “stone of the Infanta” … once been called a unique blue diamond for its long history. But its official name – the “Blue Wittelsbach” the stone got in 1722. It is believed that the diamond was mined in the famous Indian diamond mines of Golconda, and then the jewel was kept in Agra – then the capital of the Mughal Empire. In the XVI century, the diamond was in Europe, where its owners over the centuries became members of the royal families. For example, in 1664 the stone was presented to Spanish Infanta Margarita. Later it was part of the diamond jewelry of Austrian and Bavarian kings, and was even imbedding into the crown. In the XX century, the fate of the diamond has been a mystery. And in 2008, it surprised many, put up for auction Christie’s, where it was acquired by jeweler Laurence Graff. 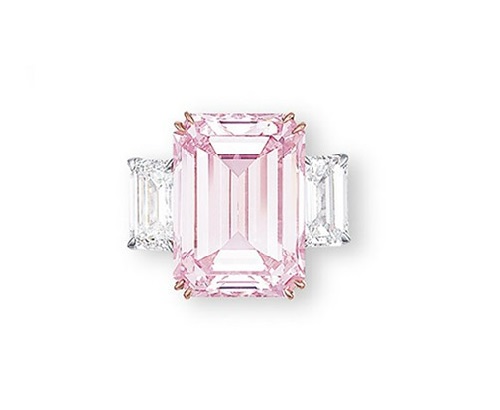 Pink diamonds are among the rarest in the world, so there is nothing surprising in the fact that they occupy the top ranks of the ranking of most expensive gemstones. In 2010 the milestone of $ 23 million was able to step over the stone «Perfect Pink», sold in Asian Christie’s auction in Hong Kong. Definition of «perfect» was not accidental: devoid of any internal defects, it was awarded the highest characteristic color and clarity – Fancy Intense Pink. Such an evaluation for more than two centuries of auctions Christie’s awarded only 18 diamonds weighing over 10 carats. Unique stone’s buyer wished to remain anonymous. And «Perfect Pink» became the most expensive piece of jewelery ever sold in Asia. 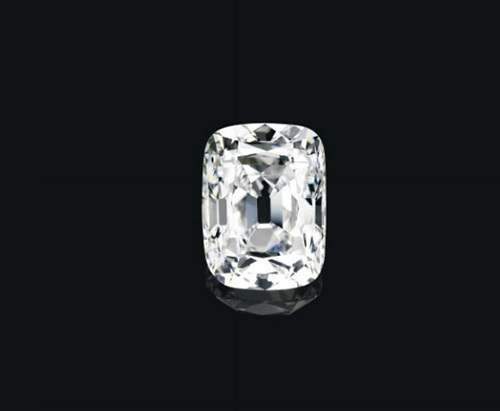 The diamond “Archduke Joseph” was in 2010 auction Christie’s, where the rare stone was sold for $ 21,480,000 to anonymous buyer. First jewel was put up for sale in 1936, then it was owned by the Habsburg family, and then twice more in 1961 and 1993, became the auction lot. The history of diamonds mined at the famous diamond mines of Golconda, is very interesting. Stone weighing 76.02 carats not accidentally is named Archduke Joseph August. Precise data on how the diamond appeared in the Habsburg dynasty is unknown, but legend is that in the XVIII century jewel belonged to Empress Maria Theresa, and then her daughter, Marie-Antoinette. During the Second World War, the diamond was sold to a European banker and was in France, where it was hidden from the Nazis and disappeared from view for a few decades before the auction in 1961. 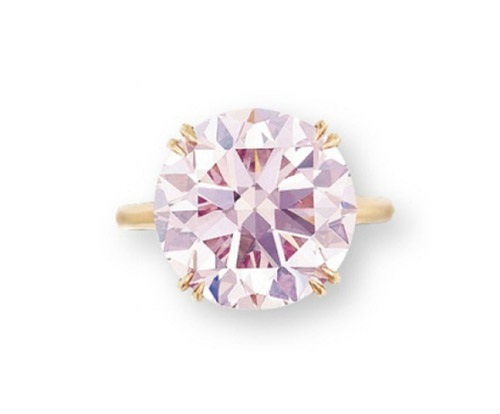 One of the largest pink diamonds in the world was sold in the past, in 2012 the Asian Christie’s auction in Hong Kong. Rare stone weighing 12 carats was the top lot of the auction and was sold to an anonymous buyer for $ 17.4 million, although the organizers planned to sell the jewel for 8 to 12 million. The name “Martian Pink” diamond got in 1976, owing to American jeweler Ronald Winston. So he wanted to mark the start of NASA’s Mars mission launch of a spacecraft “Viking”, which was created to study the surface of the Red Planet. Interestingly, the previous owner of the “Martian Pink” wanted to put the stone up for auction in Hong Kong. Recent years, Asia has an increased interest in luxury goods, while in Europe and America, the market is still not fully recovered from the crisis. 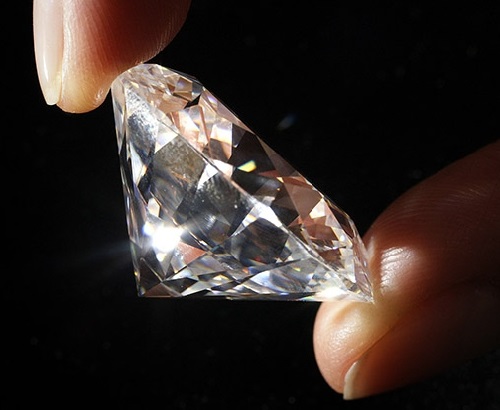 Company founder George Marciano Guess decided to teach his ​​daughter to jewelry since childhood, so bought for her in 2007 at Sotheby’s diamond weighing 84.37 carats. By the way, Marciano also decided to honor his daughter – Chloe. Now, the name stuck for the diamond forever, regardless of who in the future will become its owner. Experts of the Gemological Institute of America, evaluated the stone before the auction, called it flawless and assigned it the highest for jewelry category. “Chloe” refers to type II diamonds, which are completely devoid of nitrogen impurities. This feature can boast only 1-2% of all diamonds produced in the world. 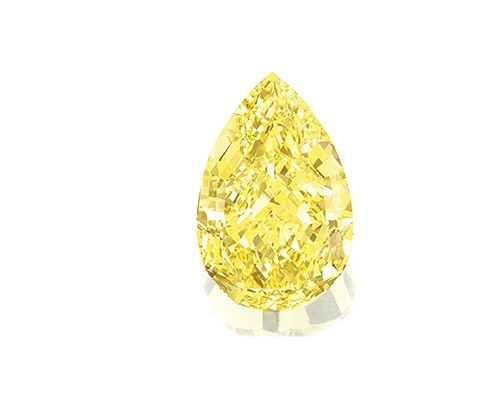 “Young” diamond weighing 110 carats, received name “Drop of the Sun” due to its lemon-yellow color, was sold at Sotheby’s in November 2011 for $ 12.4 million. The increased interest in the auction, “Sun Drop” attracted for several reasons. First of all, today it is recognized as the largest stone of the famous yellow diamonds in the world. And secondly, many collectors inspired by the idea of ​​becoming the first winner of jewelry. However, the buyer acquired the stone chose to remain anonymous. Interestingly, the diamond several times was exhibited in museums, which once again confirms its uniqueness and value. 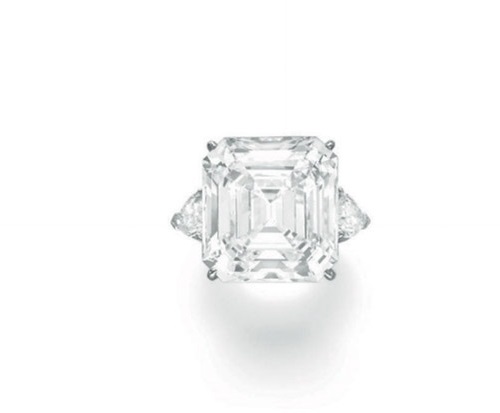 The most anticipated lot of autumn jewelry Christie’s auction in 2009 was brilliant, “Annenberg”. Square emerald-cut stone weighing 31 carats was auctioned off for $ 7.7 million, thus significantly exceeding the original estimate of $ 5.3 million. It is named after the collector and philanthropist Eleanor Annenberg, who became its owner in 2007. Eleanor Annenberg was chief of protocol in the administration of President Ronald Reagan, and her husband, Walter Annenberg, served as U.S. ambassador to the United Kingdom. Brilliant “Annenberg” embedding into a platinum ring, the design of which has been developed by a jeweler David Web. 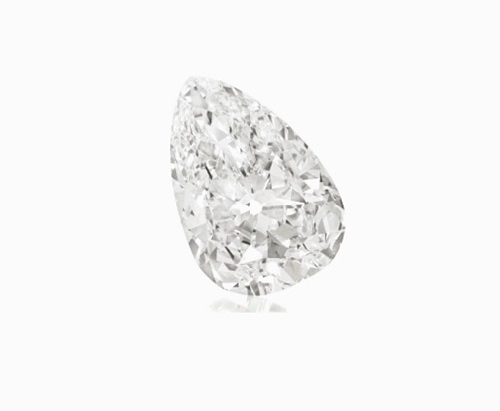 Price barrier of $ 5,000,000 in December 2009 crossed the transparent diamond “Evening Star”, sold in a special auction Christie’s. At the auction was a collection of ten of jewelry belonging to the same owner. Top-lot auction a 39-carat pear-shaped diamond with a poetic name of “Evening Star”, found in the famous diamond mines of Golconda, the development of which began in the IV century BC. Stone got its name because his previous owner liked to wear pendant with diamond on a night out in the light. At the auction the jewel necklace was sold separately, though the latter has also been put on the market.