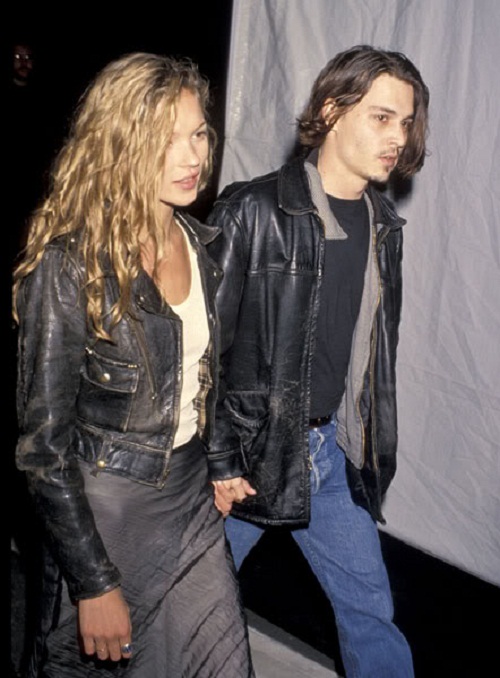 No one will love Johnny as I love him-Kate Moss
As anyone knows, Johnny Depp is one of the highest paid actors of the world, media cult character actor, and, in addition, handsome and charismatic. Kate Moss – despite the scandal, complexity, and non-format – an absolute podium survivor, and the face of all the world respected brands, as well as most fashionable girl in the world. Indeed, their love story was bright, lively and true, but sometimes unsightly and socially un-adapted. Still, the passion of Johnny Depp and Kate Moss was so heartbreaking that not one of them did not even think to play on this story for their own career. That is – both of them were originally united in the absence of the desire to please the audience. That’s why, for Johnny and Kate is much more natural to show fuck to the camera lens, rather than let the reporters into their home for the staged photography on the eve of release of their new project. 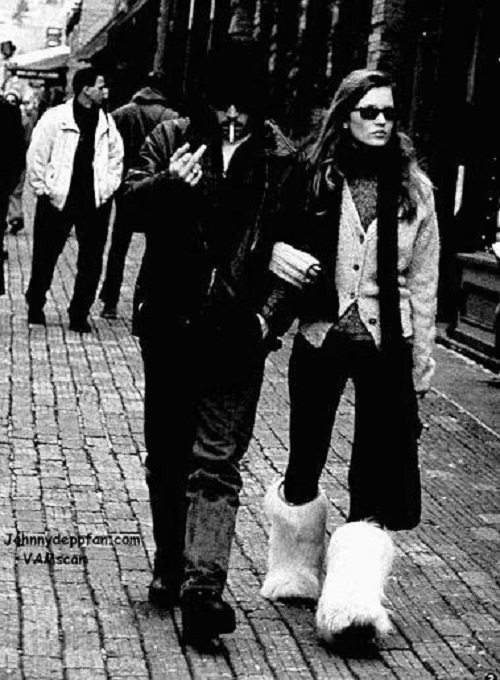 Kate Moss has become a model at age 14, a top model at 16 and in her 20 earned the first million. Effect of fragile anorexic Moss for a whole era of the 90s can not be overestimated. Small and scandalous, Moss has shifted from the real glamor goddesses of Olympus catwalk – Claudia Schrieffer, Linda Evangelista, Cindy Crawford and her legendary collaboration with the main brand of the Calvin Klein era. Moss was given to the promotion of a new lifestyle – “cocaine chic”. And the image of Kate Moss was not only in her extreme thinness, torn clothes, ostentatious carelessness, but also in lifestyle, which consisted of partying, drug use and outrageous behavior. 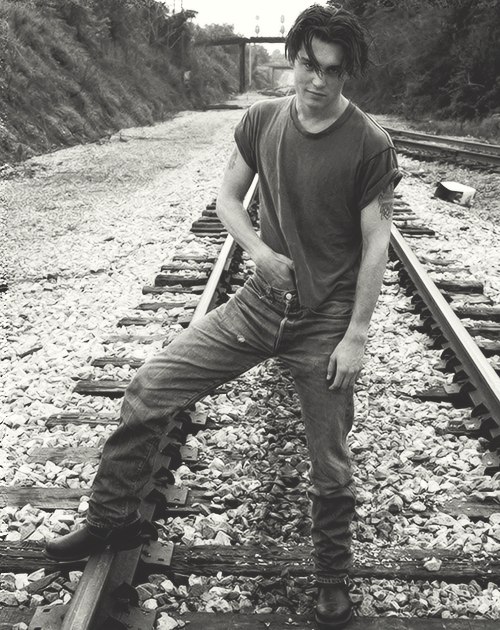 By the time they met in 1994, Johnny Depp was not the highest paid actor in Hollywood, and till his participation in the saga of Jack Sparrow “Pirates of the Caribbean” was still around 10 years.

Johnny Depp and Kate Moss met in February 1994 in New York’s Cafe Tabac. And that was love at first sight, like in the movies. Common friends, accustomed to the heavy nature of Johnny and Kate’s folly, were surprised by the speed with which each of them rushed into the whirlpool of passion, insane with drugs, alcohol, and then called by the reporters ‘cocaine romance’. 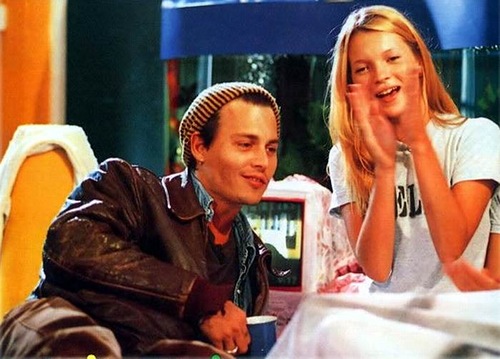 Happy together. “No one will love Johnny as I love him” – Kate Moss

“I knew from the first moment we talked that we will be together. I have never had this feeling before. We just sat down and talked, sheer nonsense. I do not remember how it all happened. But after that we did not leave”. It was a union of absolutely coincident energy of people enjoying the pure decadence of their relationship. It is obvious that they were made for each other. 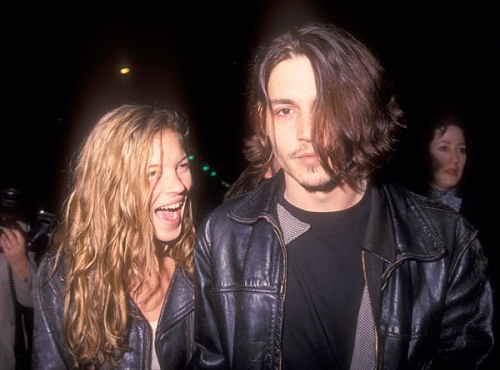 “I could not believe what is happening with me before this happened. I immediately realized it was something special. Similar feelings I have not experienced ever before. Emotions completely overwhelmed me. The emptiness disappeared from my soul that had plagued me for years.” 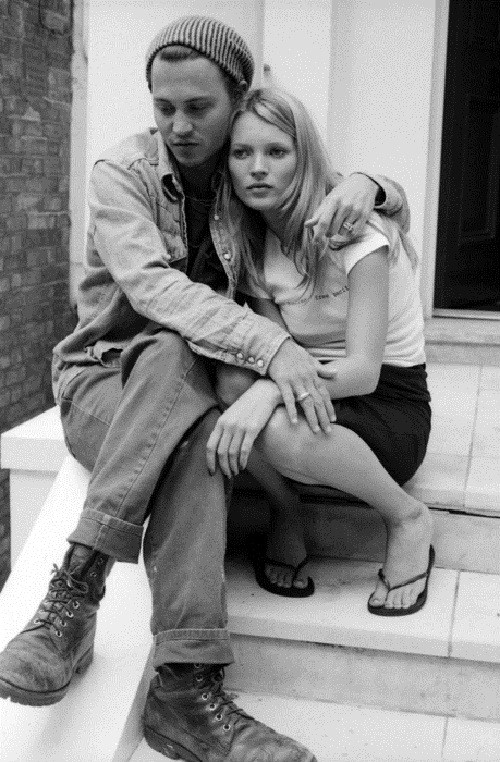 Sitting on the stairs Johnny Depp and Kate Moss

February 15, 1994, a week after the first meeting, Johnny and Kate were published as a couple – they’ve been to a charity party in favor of “Education for Drug Addiction” (DARE) in Los Angeles. Almost immediately after she moved in with him to Los Angeles, they became a constant couple on all events. They almost never parted. 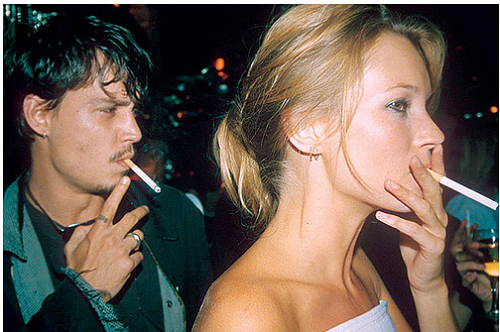 They both had a certain amount of demonstrative critical – not for the masses, but only in order to add the correct visual surroundings and relationships. Still more often they were strolling through the hot spots, locked in hotel rooms for several days, took a bath. The story of their passion snowballed myths, and even the most improbable newspaper ducks seemed plausible after the scandalous photographs of handcuffed Johnny defeated in September 1994, a room in New York City Hotel Mark Hotel after an argument with a loved one. They said that they had a fight in a London restaurant and then decided to arrange a truce in an attempt to make love right on the table for all to see, among the mountains of broken dishes. 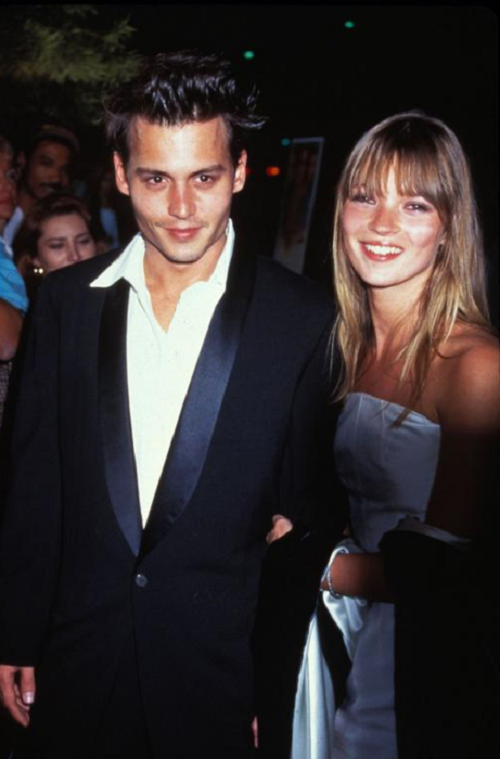 The whole world thought they were crazy loonies, but at the same time admired the talent to live well, even though with the risk to health. Johnny and Kate’s obsession has become a favorite theme of not only the paparazzi, but the glossy projects – a thriller about a pure love. In 1994 the magazine Vanity Fair has announced Depp – Moss couple’s decade and has published their joint photo made by Annie Leibovitz. Picture has become a cult.

Love Depp and Moss was the drug for both. Johnny went crazy for Kate – her promiscuity and childishness, grunge chic and tenderness of youth hit him. She, in turn, provoked his jealousy, and could not live without him. A special energy of relationship, the glue of their union were based on an instinctive understanding of each other. 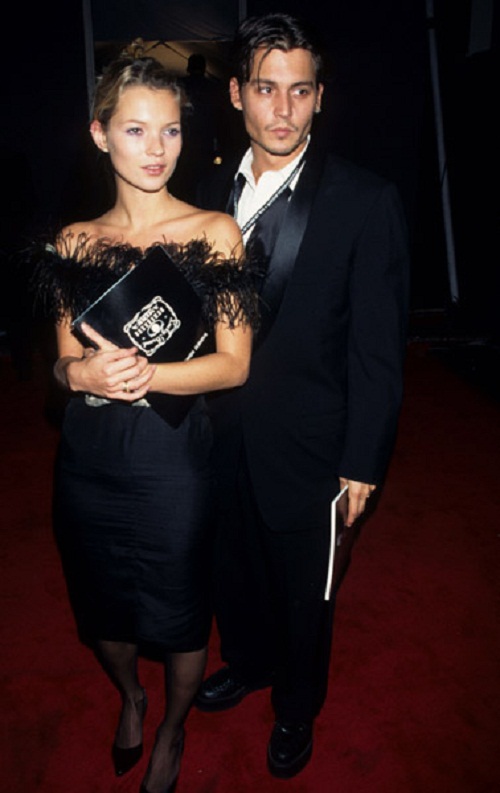 “When Johnny’s got his own club Viper Room, he arranged a surprise birthday present for me. I’ve had time to see everything that was possible, but Johnny has always managed to amaze me! When he pushed back the curtains, there were all my close people: mom, dad, John Galliano. All came from far away – from London, New York. And then Johnny told me: “We go out to dinner, put on a dress.”I replied that I do not have dress. I was in a satin dress to the floor, and he picked up scissors and cut it to the knees. I still keep this piece. the same as our love. It was real.” “It is absolutely wild. And only he can surprise me.” Johnny and Kate teased each other with new forms of knowledge of each other and their common border of peace, until one day their romance was not over.

After breaking up they remained silent for a long time. They both had to escape each other because it was unbearable to be in this electrified air, and too complex for both memories. Both of them admit that they had parted at the peak of the emotions that began to destroy because of the strength of feelings. From the mouth of one of the most famous party girl and a “bad boy” of Hollywood sounded simple and touching confessions: “No one will love Johnny as I love him.” 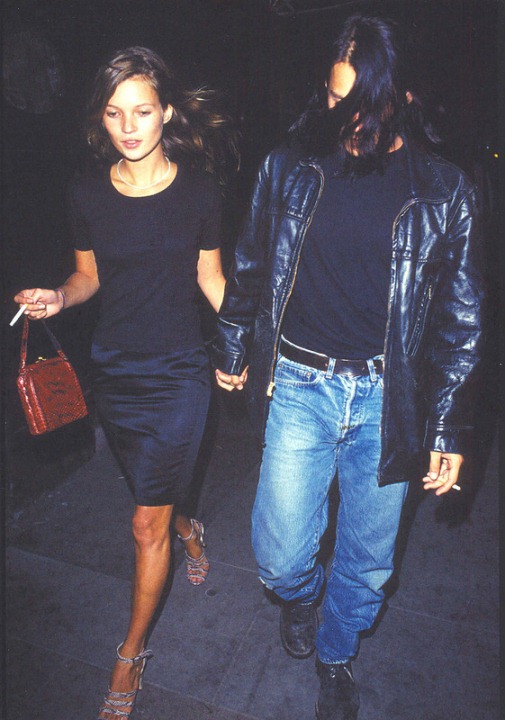 Both in blue, Johnny Depp and Kate Moss

Johnny Depp – “I cried for a week after our parting with Kate.”

A few years after parting, she did not hide that has not been able to love anyone after the experienced passion that changed her.

Johnny Depp: “Part of Kate is in me. Big part of me misses her, and I still do not understand why we are not together, and why the idea of creating a family did not come to mind.”

After parting with Kate Moss in 1998, Johnny Depp met French singer and actress Vanessa Paradis, and moved to France. But that is another story.

Timeless, trendy, topical Kate Moss and Johnny Depp the last 20 years are the stars that set trends. The scale of the personality of each of them can not be overestimated – together or separately. 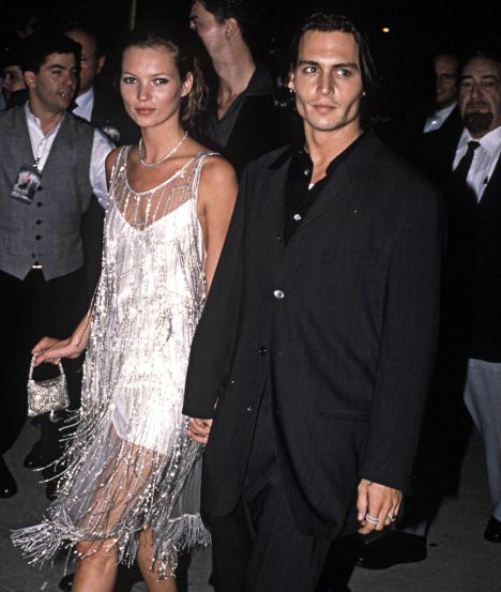 The icon of style, Johnny Depp and Kate Moss 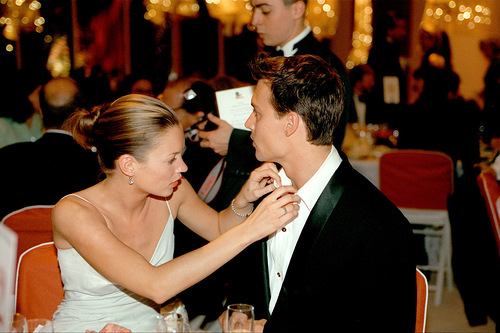 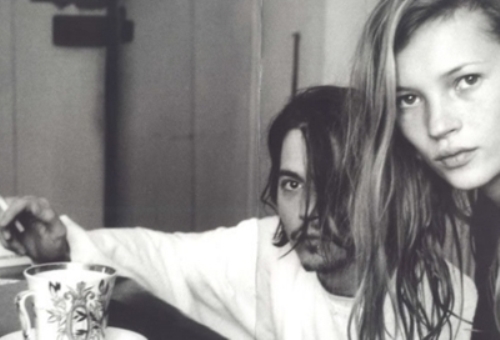 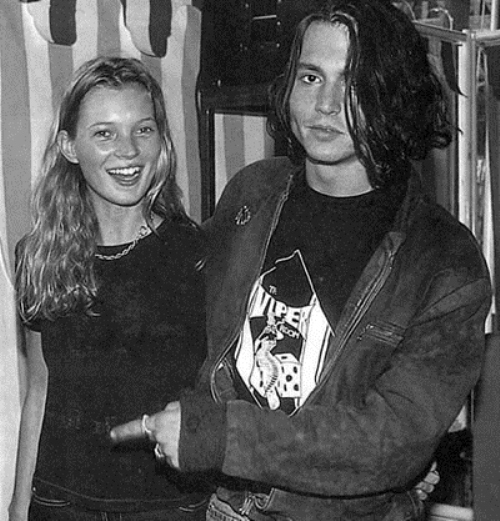 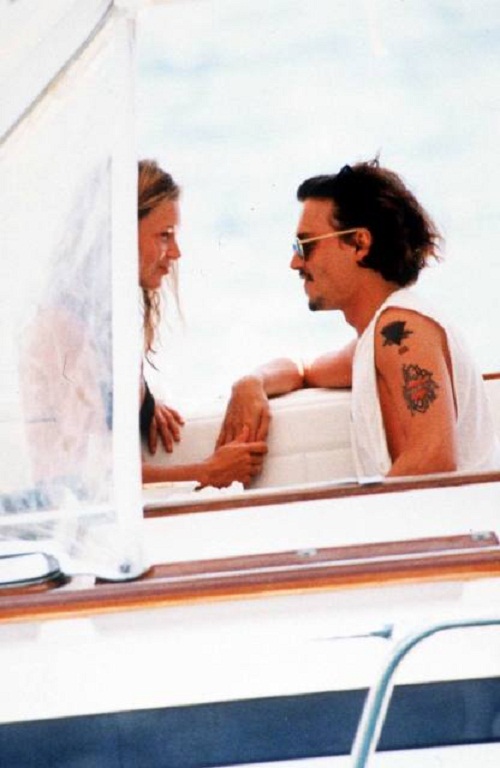 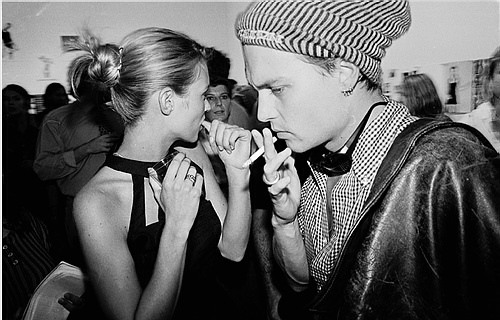 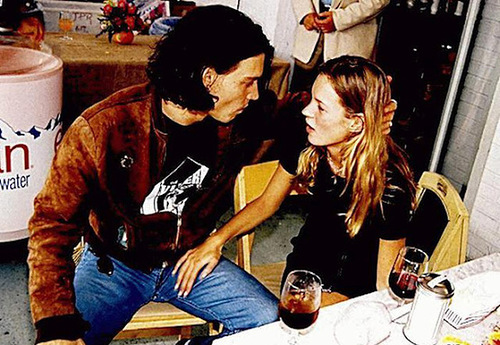 Talking at the table Johnny Depp and Kate Moss 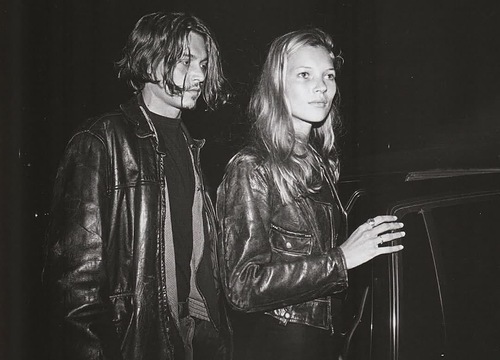 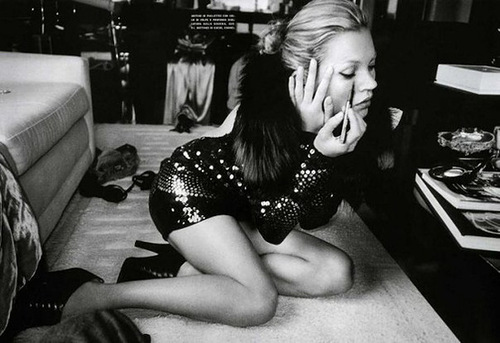 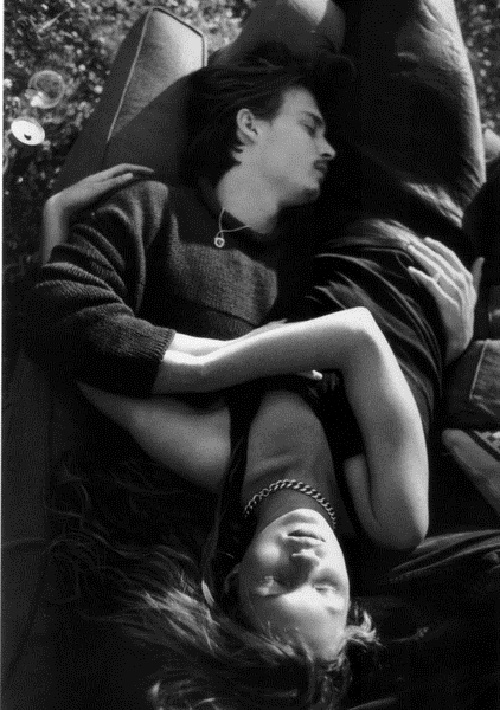 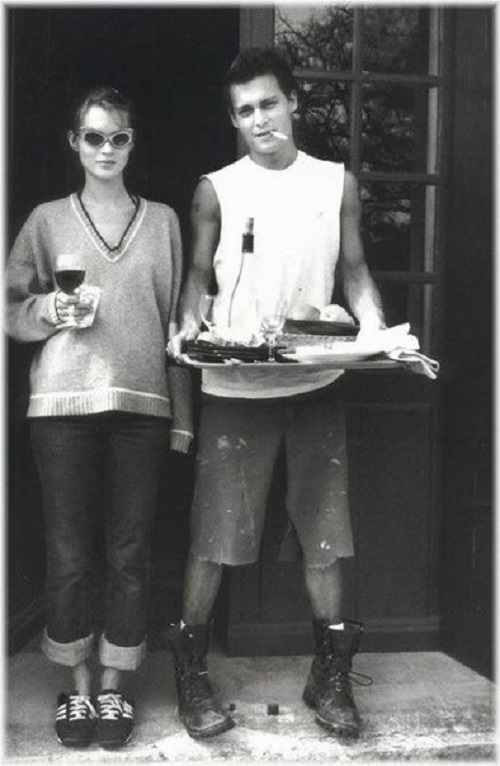 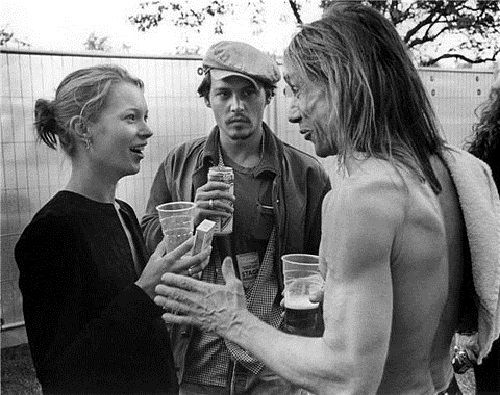 Iggy Pop with Johnny and Kate