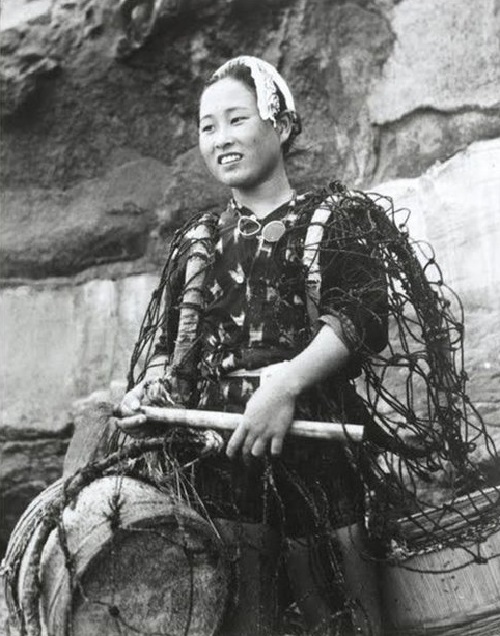 Beautiful and brave woman, one of Pearl Hunters

Pearl Hunters. Early in the morning, when it’s not too hot yet, a few dozen of boats, canoes with 10-15 people are moving away from the coast. They head to the sandy shallows, called “pairs”. As soon as they find the bank, they divide it into sections, so that all could work. First of all, the participants read a prayer gear, asking for Madonna’s favor and protection from sharks.
Noteworthy, for fast diving, catchers use a stone tied to their belt, attached to the boat with a rope. Once a diver reaches the bottom, the rest divers pull up a rock.
Meanwhile, during one dive a diver manages to catch just one pearl. And even the most experienced divers can stay under water for no more than half a minute. A shell is still necessary to find and remove. It happens that the diver finds nothing… 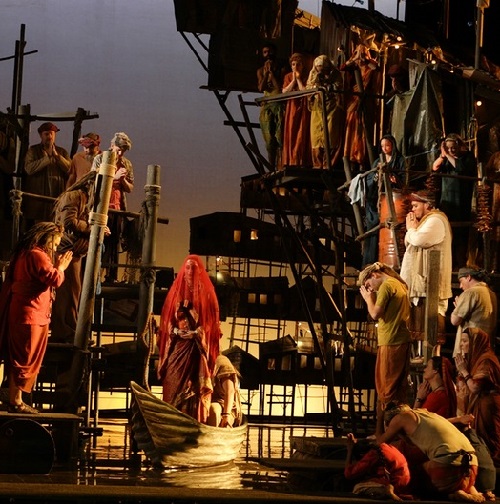 Some of the divers, however, can hold their breath for a longer period, up to 5 minutes! They are capable of during this time to collect a few shells, a lot, if we take into account the fact that these people are working practically blind. For one day every diver can reach from 100 to 200 shells.

Meanwhile, the boys start diving at the age of five, trying their hand at this field. At the age of eight they can already dive to a depth of 4 meters. By the age of fifteen young people become professionals in their field.

But catching pearls – very difficult, dangerous business. Of sea salt they loose eyesight, cold water leads to rheumatic fever – and by the age of thirty divers cease to be catchers. A fifty year-old catcher sinks except only in a warm bath.

Caught by divers pearl goes a long way before reaching the hands of its last owner. Next comes the sorting of pearls, where it is divided into selective and defective. The first is packaged and comes after the sale of jewelry companies, and auctions, the second one passes doctorization and only then goes on the shelves. The rest of the pearl is used only for manufacturing products.

Catching pearls from some time is not confined to men. Women also grasped the subtleties of the craft. Japanese divers are called ama. Ama: sea person, pearl diver, ama geisha.

At nine o’clock in the morning ama are going to the beach, they are heated near the fire, and then sit on the boats, which are operated by men. The boats are too heavy to be trusted to a woman.

Unlike men, ama use masks. They put on a weighted by lead ball belt. They are immersed in a rope that allows to work without attracting sharks. Divers are under water for half a minute, then pop up to make a breath of air.

After 20 dives, and it is about an hour of work, she climbs into the boat and lay motionless for ten minutes. The working day for ama lasts for five hours. Then the loaded boat returns to the shore.

It is worth noting that despite the complexity of such work women are happy with their fate. By this they were prepared from early childhood. This fishery is generic and passes from generation to generation. Woman-ama may choose a husband herself.

Because in our time pearls have been cultivated and artificial way, many women divers were engaged in other lucrative – they dive for seaweed, from which we get stuff agar. It is the production of jellies, paints, pastes, and more.

Women divers, unlike men, are engaged in their profession longer. Their “working” age ranges from eight to seventy-five.

In the old times in pearl hunting were engaged monks living in monasteries, as well as individuals. Due to the fact that pearl was extracted in unlimited quantities, in 1712 issued a decree banning the pearling by individuals. However, to monitor the observing decree was simply impossible, people still managed to dive for the precious stones in the depths of the seas. They did it at night. Later this decree was abolished. But then was issued a new one, which stated that the largest gems mined by individuals had to be given to the state.

In Russia, the pearl has been known for a long time. Initially called zhemchug in Russia, presumably this word came from the Arabs, but there is also a version that the word came to Russia from China. Chinese called it “chzhenchzhu”.

Many do not even know that pearls were mined not only in the salty sea bottom, reefs, but also in our Russian north, in small rivers. In the XVI century, pearls produced in the villages on the Dvina, and in the rivers of Veliky Novgorod. Some deposits were rich with rather large pearls, serving for making necklaces.

But not only the north of the country was rich in deposits of pearls, southern regions also abounded pearl. Black Sea was rich with kafa pearls (Kafa – the ancient name of Feodosia), and Kherson. Pearls themselves were quite large (0.5-1 cm in diameter), a beautiful pearl had various colors and shades. The shape of pearls was somewhat bizarre. But as usually happens in such cases, the desire to have a Jewel, human passion and the inability to control the situation led to the fact that these deposits were depleted rapidly and died.

But the pearl preserved in the Russian State Museum. It decorated vestments, different kokoshniks (women’s headwear), holiday tunics. Pearls on them was from small to relatively large, surpassing even the sea pearl.

The largest known gems until now has been found in a giant shell clams – weight was 6.4 pounds, sized 24 to 16 centimeters. Black pearls are very rare, it is appreciated in Europe. In South America prefer bluish, greenish or pink. In Russia, the State Hermitage Museum, is stored the Baroque style suspension Swan. It is about 4 cm in length, decorated with gold and enamel. Hats of monarchs were not without attention of a beautiful, precious stone. Famous Monomakh along with other precious stones, decorated with large pearls.

Pearls also present at the Grand Imperial Crown, on the crown of the British queen. Rulers have always valued this stone. This stone decorated all the clothes of the royal family. It was believed that this stone would help the girls to keep their chastity until marriage, and young people in the future would become wise rulers.
Mikimoto Pearl Crown was crafted by Mikimoto Company, the world’s great manufacturer of cultured pearls, in 1978 to commemorate the 85th anniversary of the discovery of their method of culturing pearls.

Famous actress Elizabeth Taylor had the most expensive pearl necklace in the world. It consists of 150 large black pearls, with a diameter of 7 millimeters. Like most of the pearls, mother of pearl is also used for manufacturing jewelery. Its beauty can compete with pearls themselves, mother of pearl can be polished, cut.

Products of pearl preserved in ancient tombs, numbering at least several thousand years. Even in ancient Egypt used to make pearl jewelry: earrings, bracelets, necklaces, and small vessels for ladies. All of these things were made of large shells caught in the Red Sea. But later, strangely enough, mother of pearl in Egypt went out of fashion. The tomb of Tutankhamun has no pearl. But centuries have passed, and the beauty again triumphed, pearl again became popular.

Orient – a game of colors, their modulations, which are caused by the reflection of light from surfaces forming the pearl layers (such parameter is checked by the “fire” of a diamond), the degree of transparency. Sparkle – the play of light on the visible surface of the pearl, as a bright spot of reflected light as a nickel-plated ball. Gloss – a reflection from the outer surface of the pearl, which is due to its delicate structure. Glitter should be slightly creamy.

To improve the quality there is a special treatment. It consists in the fact that the entire surface of the pearls, with special tools, is brushed from one to a dozen layers. Because these layers are very thin, the process is quite complex. Amazingly, this process has been known and used since ancient times. 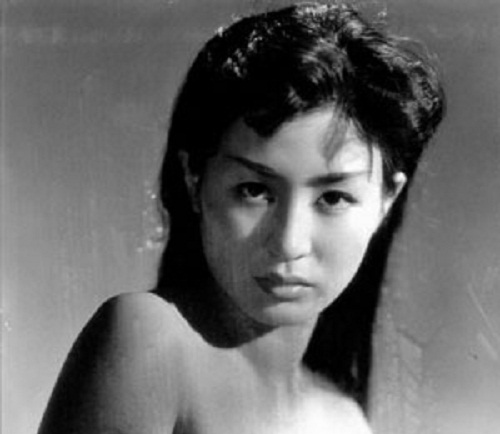 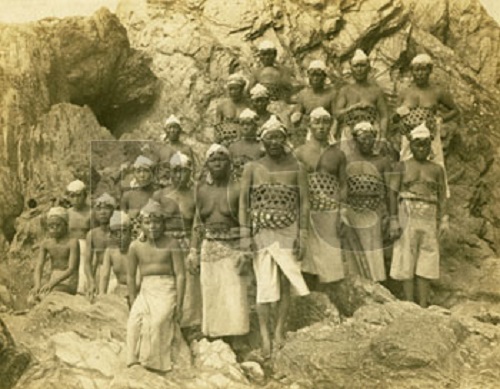 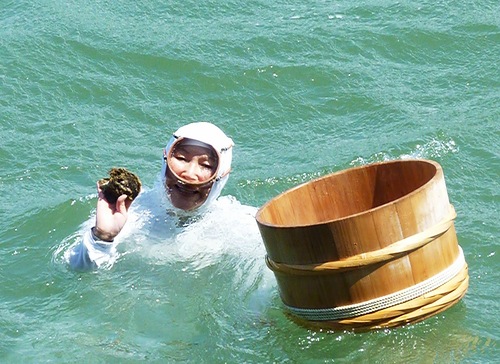 It happens that the diver finds nothing… 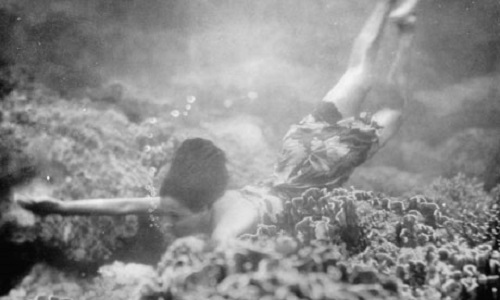 Some divers can hold their breath up to 5 minutes! 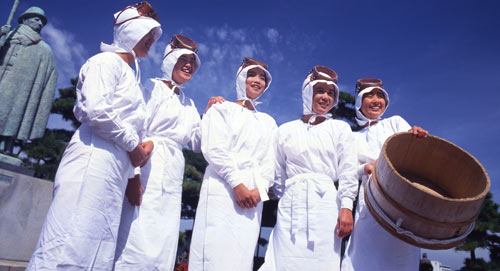 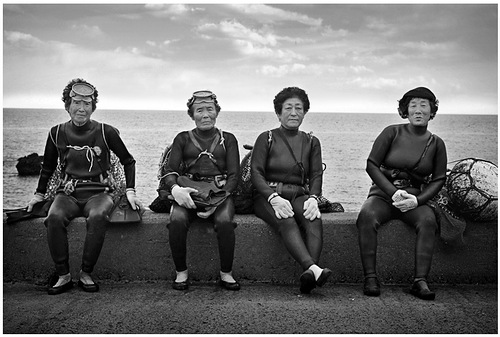 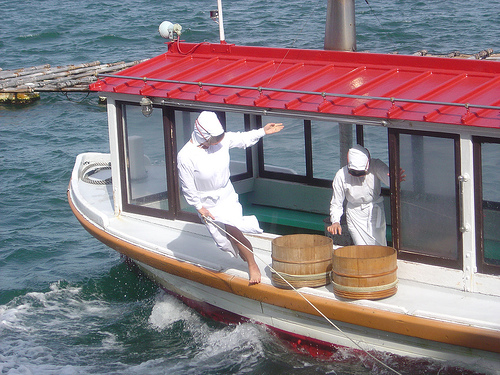 A boat with Pearl divers 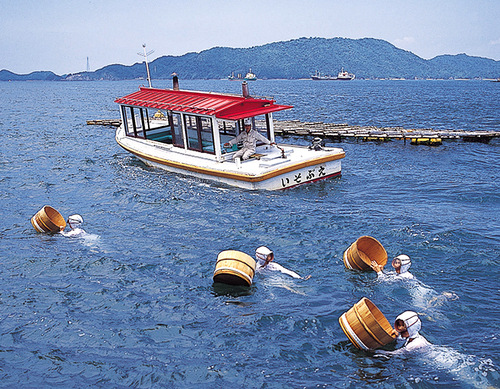 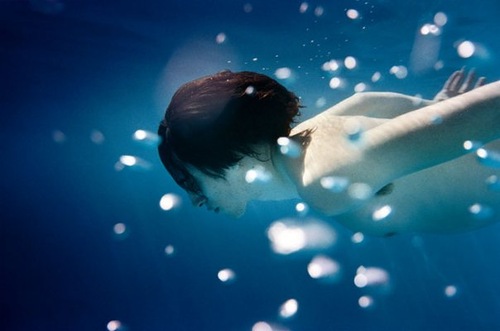 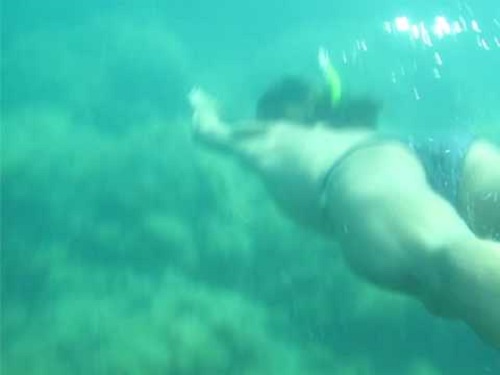 The working day for ama lasts for five hours 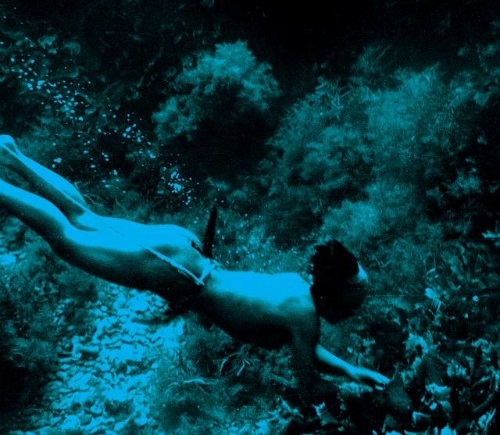 Women divers, unlike men, engaged in their profession longer 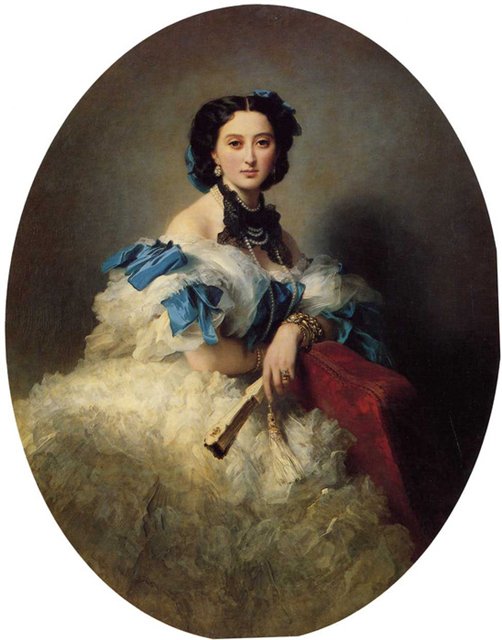 Examples of Pearl in art 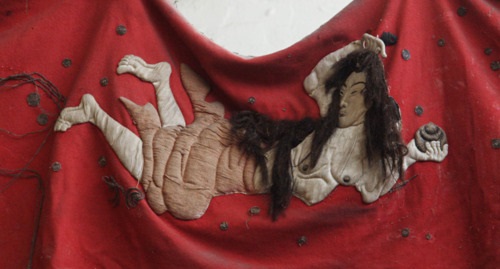 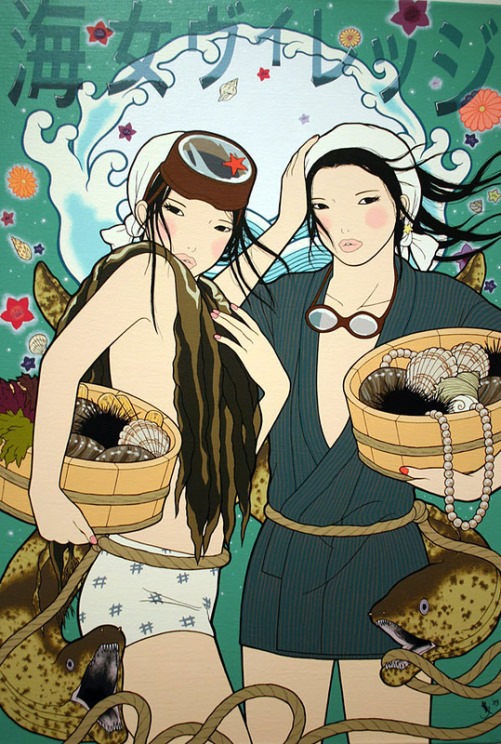 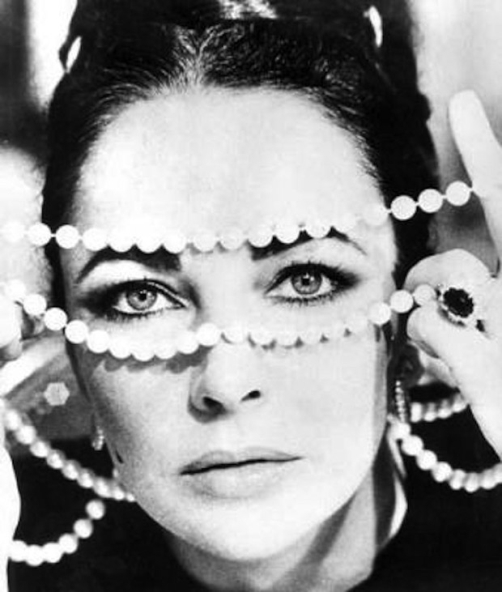 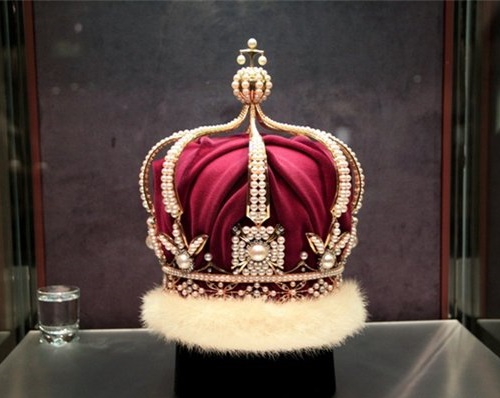 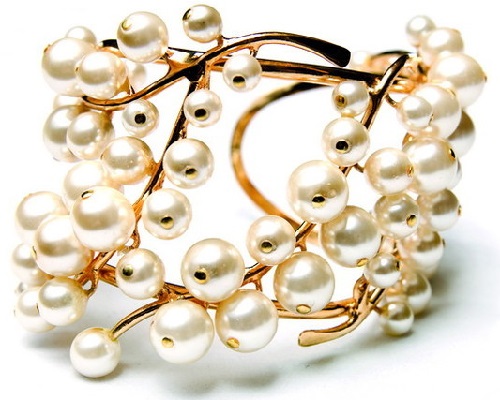 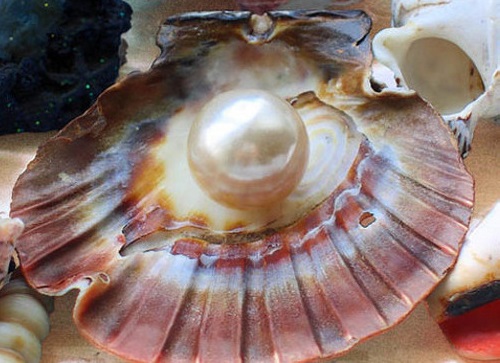 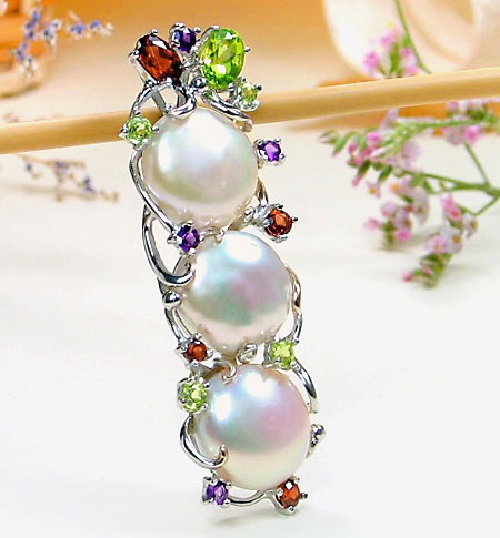 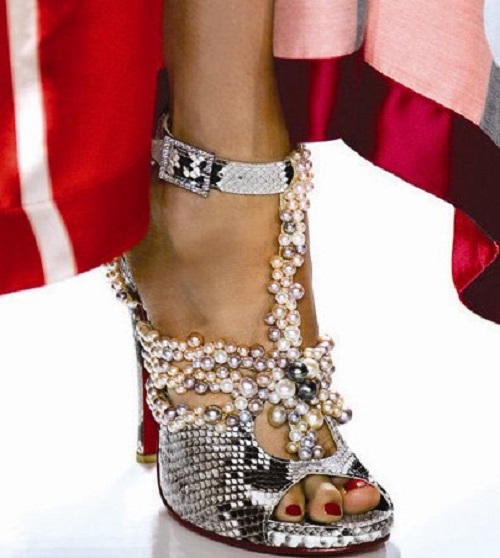 The only gem produced by living creature – Pearl 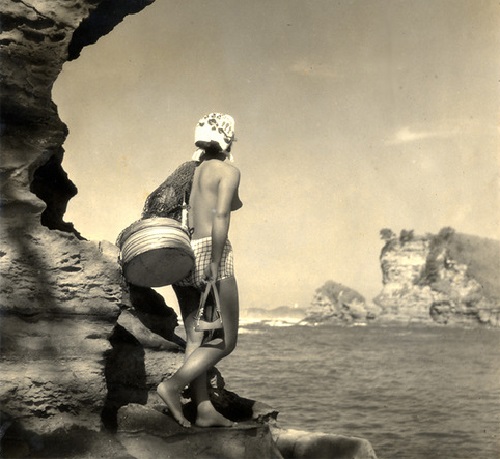 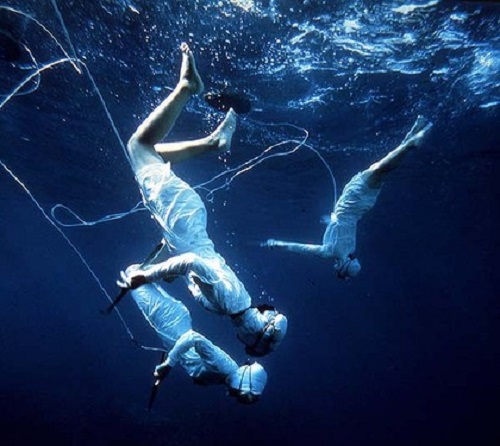 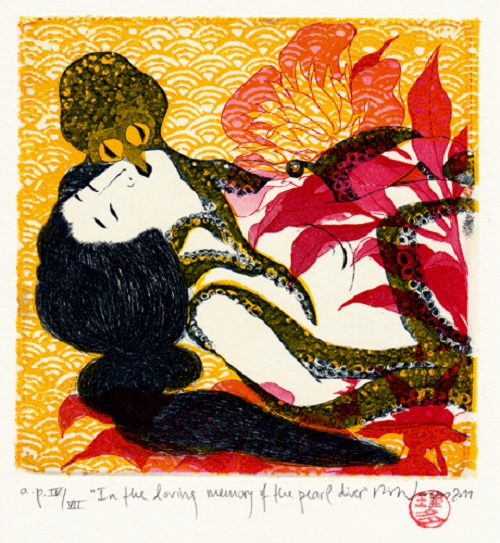 in the loving memory of the pearl diver 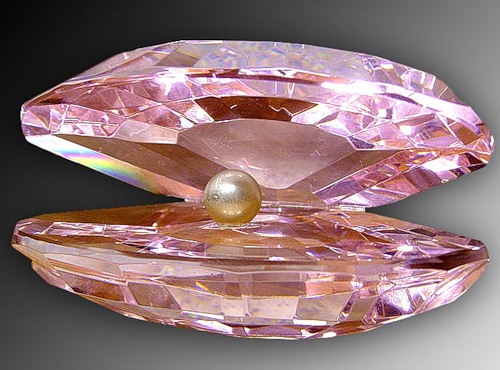