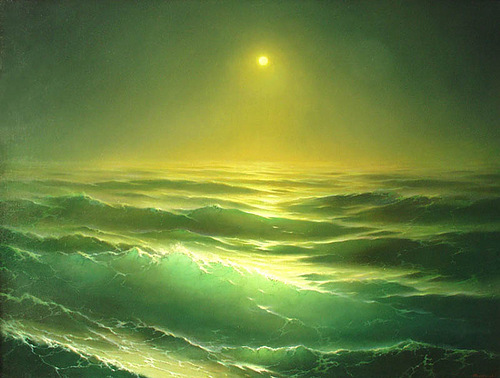 Realistic seascapes by Georgy Dmitriev
born in the city of Murom in 1957, Russian artist Georgy Dmitriev graduated from Moscow Academy of Arts. He is a member of All-Russian Union of Artists. Georgy’s realistic paintings are very impressive, like aqua splashes out of the frame and swallowed in the terrible whirlpool. At any exhibition, the astonished spectators as if rooted to the spot. Meanwhile, seascapes created by George Dmitriev, sea elements by the skill are worth the brush of great marine painter Aivazovsky. Artworks of Georgy Dmitriev are in the collection of the Ministry of Culture, museum in Vyksa, and the Museum of Contemporary Art in Taipei (Taiwan). They decorate the art galleries and private collections in Spain, Russia, Turkey, Germany, Denmark, the U.S., the UK, Canada, France and Japan. 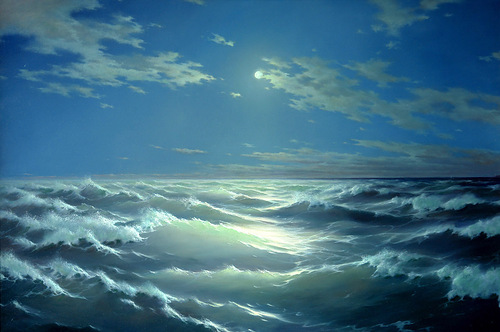 Among the modern domestic seascape painters George Dmitriev has no equal. No one but he could not bring on canvas sea elements with skill worthy of the brush by Aivazovsky. Not without reason at any exhibition viewers are surprised by what they saw as rooted to the spot, near the sea landscapes of George Dmitriev. And those who wish to purchase them for their own collection stand in a queue. 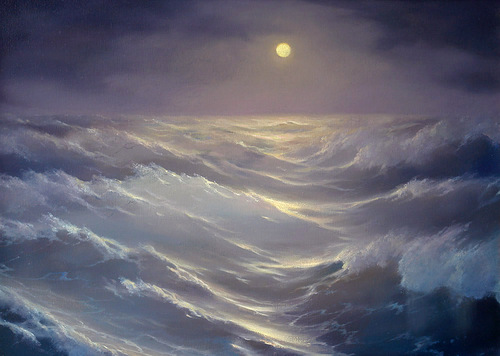 No wonder that many of the works of George Dmitriev are in the collection of the Ministry of Culture, the Museum of Vyksa, the Museum of Contemporary Art in Taipei (Taiwan). They are stored in galleries and private collections in Turkey, Germany, Denmark, the United States, Britain, Canada, France and Japan. With all the dissimilarity of these countries their is one common thing – relationship with the sea. They are geographically contiguous with it, and the sea powerfully invades their economies in ways of life, leaving a trace in the history of culture.

Seascapes by George Dmitriev are fascinating. When you stand next to them you feel as if a sea wave splashes out of the frame and swallow a formidable whirlpool. Such manner to show sea elements was characteristic feature of the great Russian marine painter Aivazovsky. 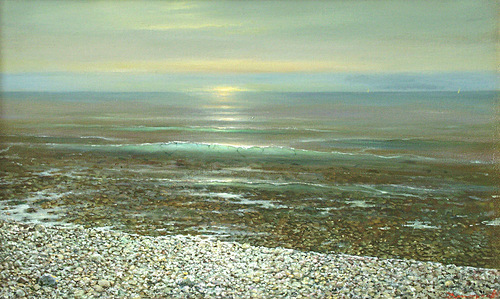 The artist expresses his admiration for the strong force of the sea and sky, dark blue, almost black, billowing clouds of dark pall hanging over the white foam of waves and streams of light cutting through the zigzags of lightning. But the main “character” of the picture, as well as in many other seascapes of George Dmitriev – is, of course, the sea wave, filled with light, majestic and beautiful in a halo of white foam. 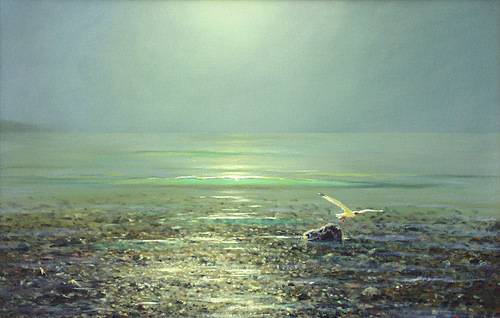 Masterfully crafted, these still lifes, imbued voiceless quiet breath of life, can feel the atmosphere of the home life of the artist. Persistently recurring motif in still life – violin and birds, suggesting a possible link between painting and music. 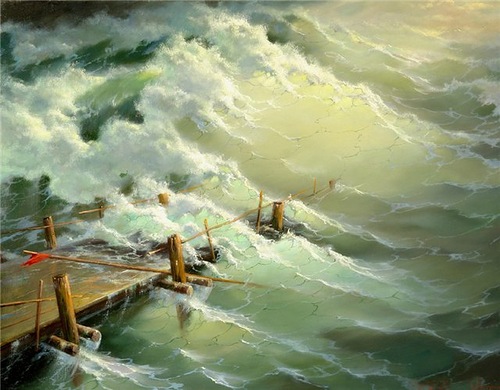 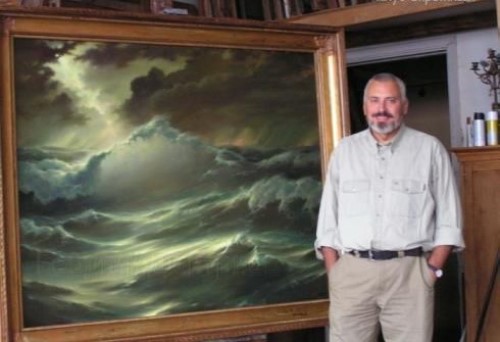 Georgy Dmitriev next to his painting 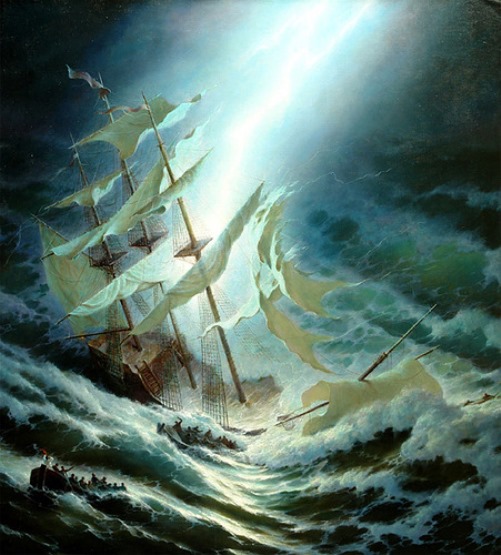 A ship in a storm 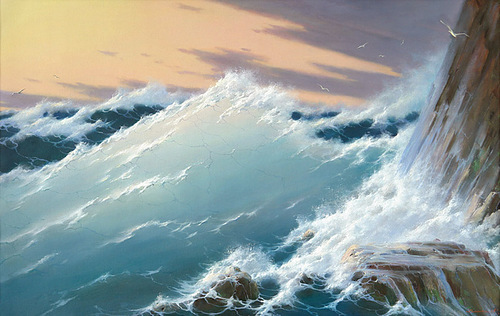 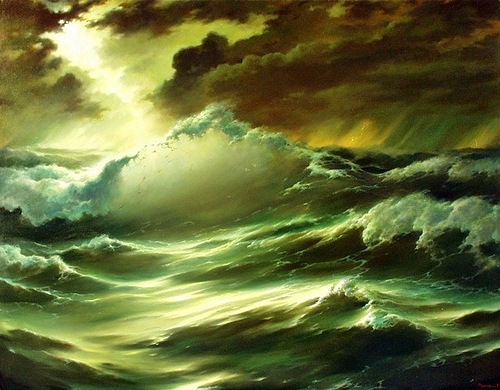 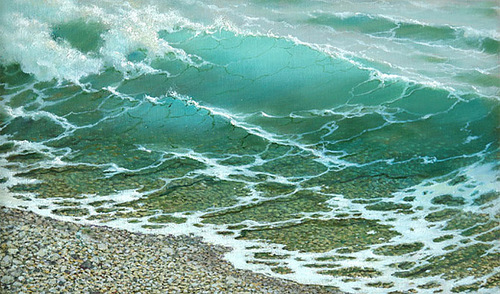 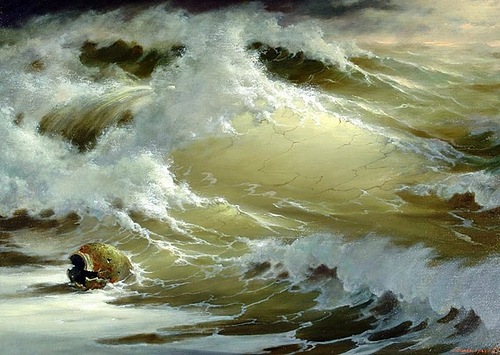 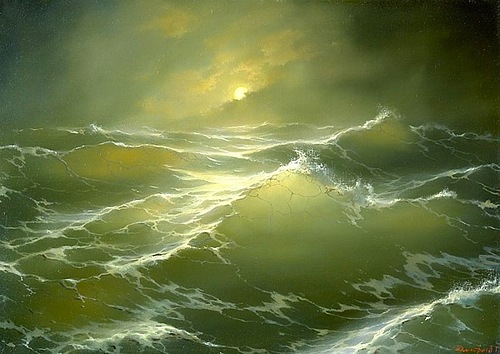