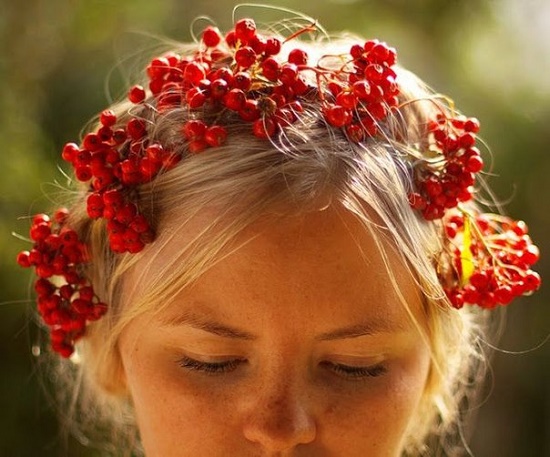 Red Rowan in Slavic mythology
The autumn forest is whimsical and beautiful. How many bright colors there are in it! But among the trees, dressed in yellow outfits, rowan is especially prominent. The heavy clusters of scarlet berries burn in the sun, attracting the attention of people and birds. Sweet aroma fills the air. Birds willingly cherish ripe fruits, and people admire its magical beauty.
Known as sorbus, whitebeam, rowan, service tree, and mountain-ash, it is a tree-amulet used in magic and folk medicine. Considered a magical plant for many centuries, it played an important role in the beliefs and rituals of the ancient Slavs, Scandinavians and Celts. For example, in some places the peasants, when they returned from the cemetery, hung rowan rods over the door, so that the deceased “did not return home.” And in case the deceased turned into a ghoul after death, he was nailed to the ground by a stake, which was sometimes made from rowan. Wanderers made a staff out of mountain ash, chewed it and left a chip in their mouths behind their cheeks so as not to be afraid of any sorcery on the way. 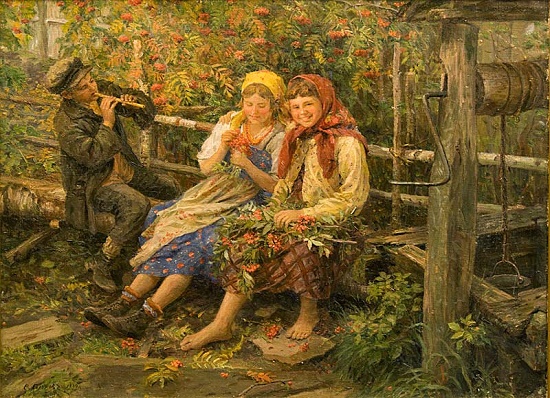 Meanwhile, the magical properties of red rowan was due to the belief that it was created by Satan. However, God, noticing that the rowan fruit had a kind of crosses and the leaves themselves looked like a cross, selected this tree from the unclean, and since then, the devil hates and is afraid of this tree.
By the way, there is a folk sign: the forest is full of red rowan – will be the rainy autumn.

Rowan branches, along with other greenery, were consecrated to the Trinity, from them weaved wreaths and with them decorated houses. Sometimes people used its branches for washing, in traditional banya (sauna) for beauty and health.

Besides, in many places, people used rowan in rituals associated with cattle. So, for example, shepherds chased cows with a branchsh of rowan, and in particular, young cows who have not yet calved. 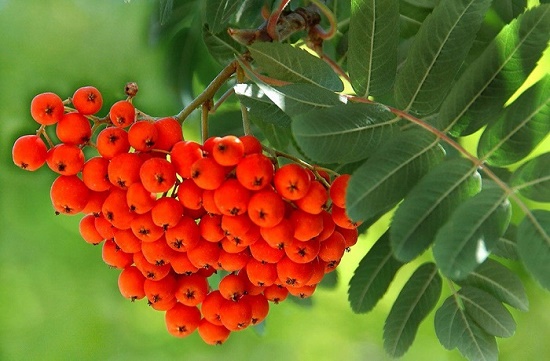 In the Russian North, the shepherd went to the forest and tore up three trees – a mountain ash, a spruce and a pine. Then, he split them up to the top, put them in the gate and for the first time in the spring drove through them the cattle to the pasture. In some places, the shepherd also made for himself a rowan bag (batozhok), on which he made nicks by the number of cows in the herd. Also, the peasants believed that the milking depends on the rowan bag. In addition, the thrown through the cattle rowan could prevent from evil forces. On the day of the first pasture of livestock in the field, the shepherd kept this batozhok under his arm, chased the herd to the pasture, and then, in secret from all, buried batozhok in a damp place. On the last day of the pasture of the cattle the shepherd dug out this rowan batozhok and burned it, after which the shepherd considered his work complete. 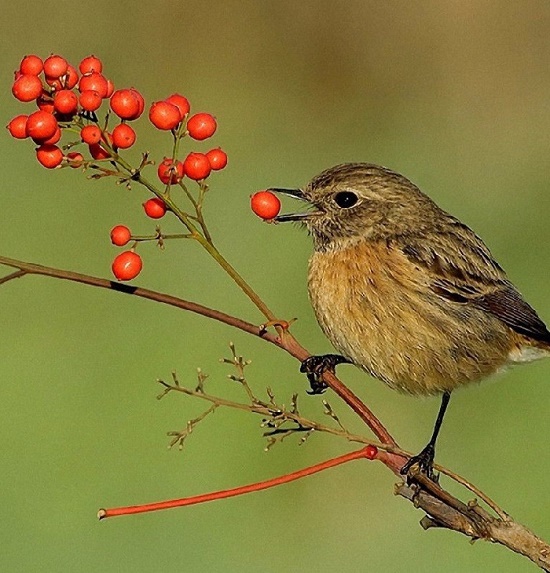 A bird with a berry of red rowan

Noteworthy, the rowan played a special role in wedding ceremonies. For example, in some places with rowan branches and berries decorated the place of wedding ceremony – the house and yard, and also a wedding cake, etc. Here and there the matchmaker poured the rowan roots to the bridegroom to prevent the spoilage at the wedding. Besides, the bride sometimes could keep with her rowan roots or a cross from the mountain ash to protect her from the evil eye, etc. 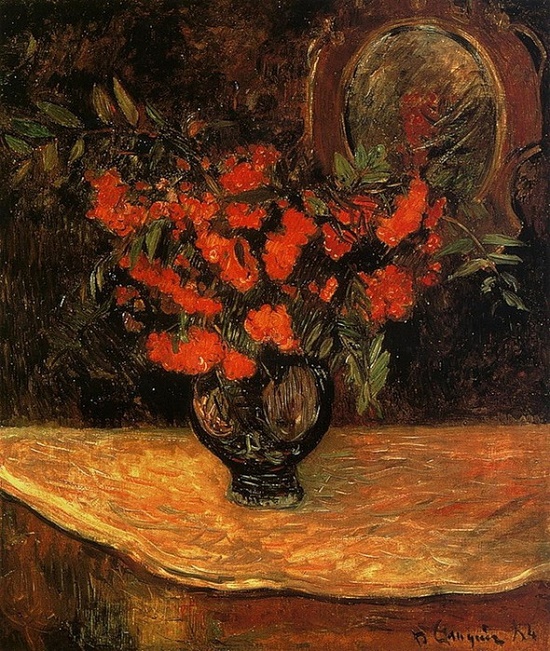 But, despite the positive properties of mountain ash, in some places it was considered an unclean tree, connected with a devil, a witch, etc. So, for example, Russian peasants believed that a witch or werewolf, in order to turn into something, somersaults through a rowan tree or a rowan tree stump. 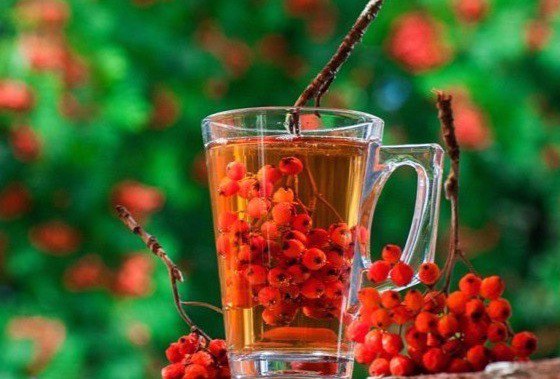 By the way, people called stormy summer and autumn nights (especially during the flowering and ripening of rowan berries) – rowan nights. At the same time, on such nights, as on Ivanov’s day, a fern blooms. For example, peasants of some places believed that there are three rowan nights in the year: one at the end of spring (when the mountain ash blossoms), the other in the middle of summer (when berries begin to ripen on rowan), and the third in early autumn (when rowan berries completely ripen).

Rowan, as a not completely “clean” tree, helped in verbal spells “from portage, stuff, commotion”, often pronounced in the spring near a mountain ash, standing on an anthill. Verbal spells (zagovory) of fever pronounced at the root of mountain ash, and then, snatching it out of the ground, they laid on the bed beside of the sick man. Rowan could take diseases from a sick person. 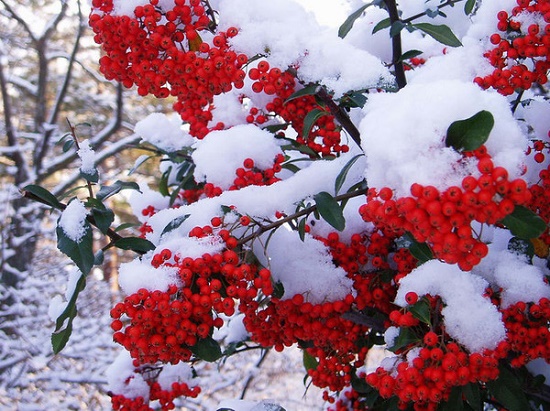 However, in many places there was a prohibition to cut or break bushes or branches of rowan, to use mountain ash for firewood, to tear flowers, and sometimes even berries of mountain ash. Considered a very vindictive tree, it was believed that one who would break or cut it down will face the unpleasant evens. For example, serious disease or even death of his relatives. Also, was the belief that a man can turn into a mountain ash (a girl damned by parents, an orphan, etc.). In addition, the ashberries can not be cut either because the healers are “carrying” the diseases to the tree, and he who cuts down this rowan will “take” the disease on himself, get sick and may even die. 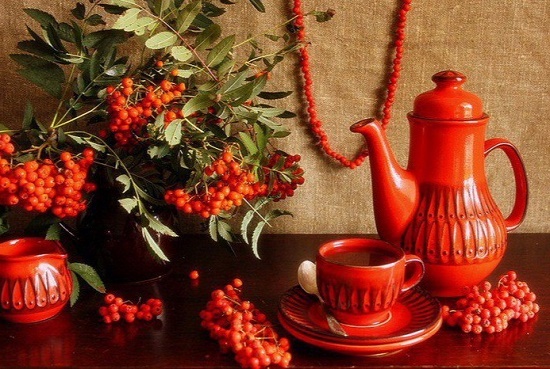 Because of the bitterness and rigidity of the rowan berries are not everywhere used for food. However, in Russia they eat it with pleasure, preparing various dishes from rowan. For example, fresh berries of mountain ash, baked with honey, have long been a pleasant and healthy autumn food. Cooked with sugar rowan berries were on tables for snacks. In Siberia, some peasants scalded rowan berries with boiling water, and then, “pouring with yeast,” allowed to ferment, resulting in a strong and pleasant wine. Rowan syrup made from berries, and ashberry kvass is a pleasant soft drink, used, among other things, for medicinal purposes – with various inflammatory processes and as a laxative, diuretic and kidney cleanser.

Peasants usually began to prepare rowan at the onset of the first frosts, since the frost largely removes bitterness and makes the berries softer.

The symbol of Autumn – beautiful berries of mountain ash, which for the Slavs were of great importance

Red – red from berries of mountain ash –
At least the bullfinches have something to eat…
A ray of dawn is walking in the curtains,
And the coldness pours down the window frames.

The autumn garden covered in snow,
The leaves of the fallen breeze rustle.
How much of what was before –
Still brings warmth, or sadness and bitter …

I really like people’s lives
To the frost, a prepared garden,
Not flowering, not giving fruits any more,
But only sighs in grief, meeting the leaf fall. 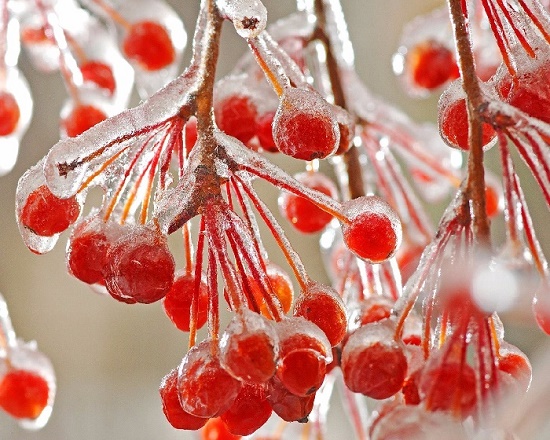