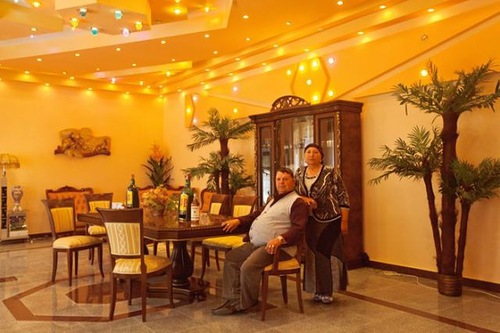 The “King” of Romanian Gypsies Florian Chioaba (his title was inherited from the father) has to 50-80 million euros per year. Romanian gypsies living luxury lifestyle

Romanian gypsies living luxury lifestyle
In Romania, not far from Bucharest there is one of the richest cities in the world – Buzesku. There are about 800 houses there, and each worth between 2 and 30 million dollars. This is Beverly Hills number 2 – the capital of the gypsy-millionaires. Meanwhile, the “King” of Romanian Gypsies Florian Chioaba (he inherited his title from the father) has to 50-80 million euros per year. Besides, his Koldash clan has about 300 families, and at least half of them have houses worth 3 million euros. And the total income of the “King” and his clan is close to 300-400 million euros per year. In fact, it consists of ordinary offerings to Roma “obschak” (slang for bank), and in particular, 5-10% of the criminal and semi-criminal income, cigarette smuggling from Romania to Western Europe, the hotel business and trade. 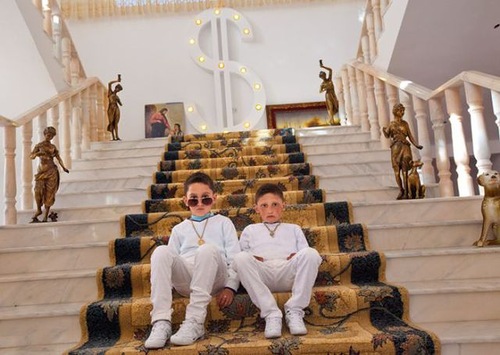 Similar situation is among the Roma “elite” in the other countries of Eastern and Central Europe. For example, even in a poor gypsy Moldova “baron” Cherar Arthur and his clan have up to 20-40 million euros per year. And a clan in Kosovo, “Baron” Nedzhmedina Nezir – up to 100 million euros per year (mainly foraged Kosovo Roma in Germany and Austria).

Like most of the rest of the “elite” of Eastern Europe and the former Soviet Union, these gypsies deliberately show a lavish lifestyle. In other words, they literally live in gold – on home interior decoration, including a gold toilet for Gypsy “King” of Romania Florian Chioaba, gone up to 55 kg of gold.

However, Gypsy millionaires of Eastern Europe is a perfect example for libertarians. Thus, they do not pay taxes, and live in complete freedom – from prejudice marriage laws, weapons, etc.

The October issue of National Geographic magazine tells about the life of the Roma-millionaires in their capital – the Romanian city Buzesku. The town located 80 km south-west of Bucharest has a population of 5 thousand people. In Buzesku about 800 houses has been built, and each worth between 2 and 30 million dollars. In general, the cost of all this real estate millionaire Roma is estimated at $ 4 billion.

Like their counterparts on the Russian Rublyovka, Roma from Buzesku pay no taxes to the state, regardless of formally unemployed or owners of firms with a zero balance. There is, however, one exception – their houses are considered unfinished and therefore subject to a small tax on property, usually 200-300 euro per year.

One of these gypsy millionaires named Parachiv tells how he became a rich man. After the establishment of capitalism in Romania in 1989, the main fishing enterprising Roma began buying ferrous and non-ferrous metals.

As in Russia, the first thing the nouveaux riches began showing over-consumption. Expensive cars, palaces, gold. But there is one difference between Roma millionaires of the rich Russians – today they do not extort money from their country, and of the rich European countries. Gypsy-Romanian nouveaux riches amassing money in France, Italy and Spain. And these funds are invested in their homeland – in Romania. While Russian nouveaux riches, on the contrary, prefer to extort money out of Russia and put them in the palaces in London or on the Riviera.

By the way, Buzescu millionaires work shifts: 3-4 months in Western Europe, then home for a few weeks (or forced return to weddings, funerals, baptisms, family and relatives). And because most of the palaces in the town are filled with children, the elderly and women.

Interestingly, most rich families remain faithful to traditional crafts. Many of them keep pigs, poultry and horses in the back yard of palaces, women sew quilts, old engaged in chasing copper utensils. 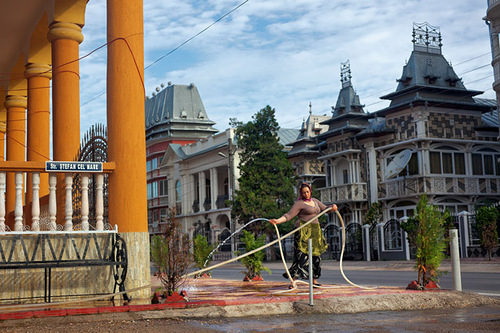 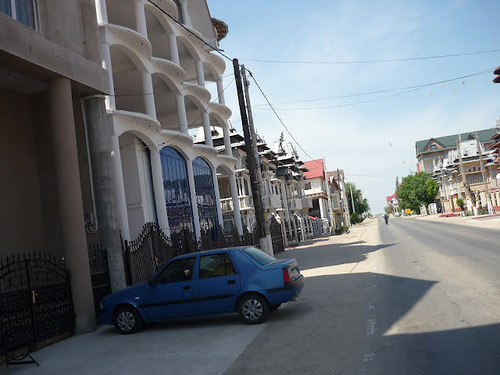 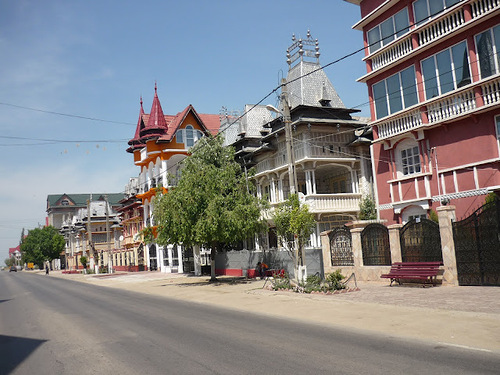 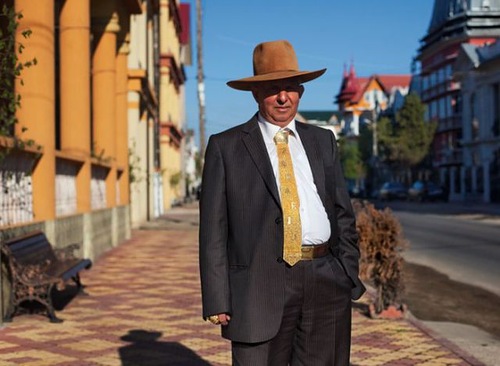 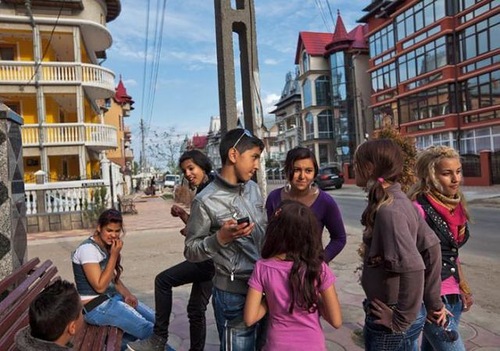 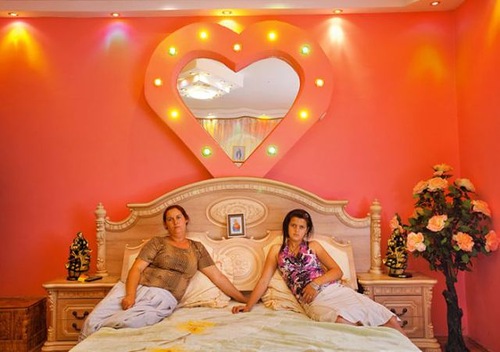 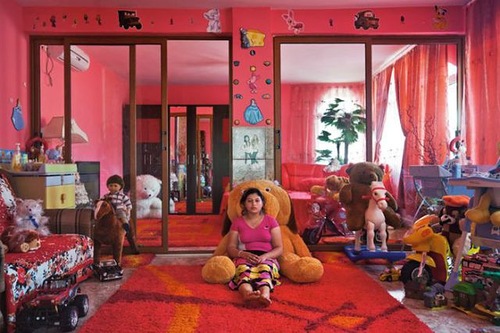 The interior of Children’s room – with mirrors and uncountable toys 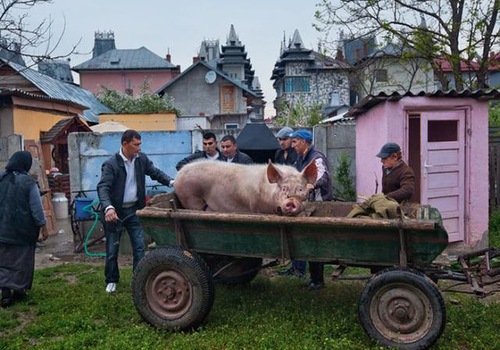 Meanwhile, a typical inner yard of a rich house 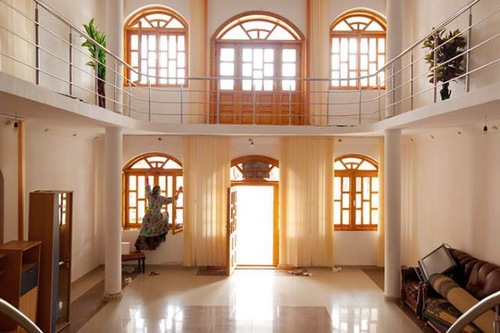 Inside the Romani palace 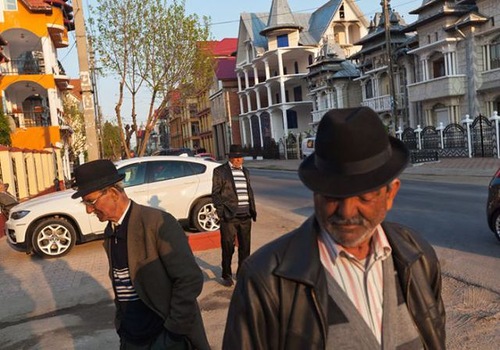 Men from the town of Buzesku, the capital of the gypsy-millionaires 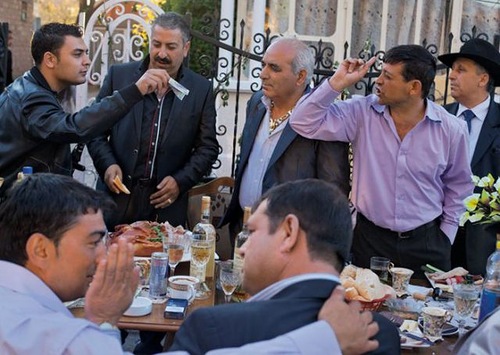 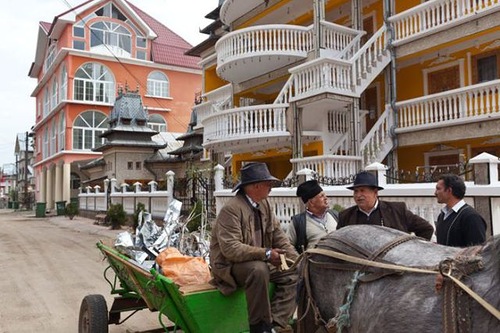 A town of contrasts. Even living in rich houses they remain faithful to traditional way of life 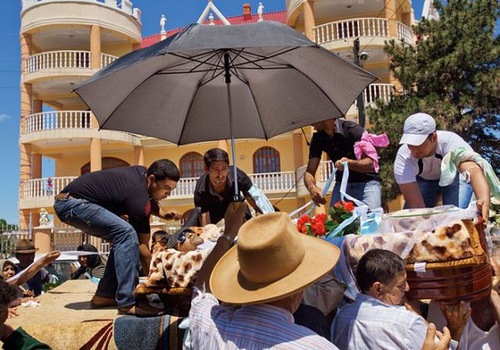 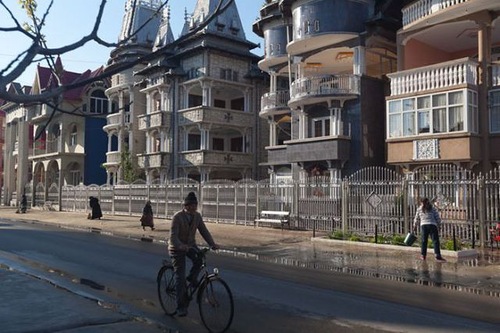 In the town of Buzesku 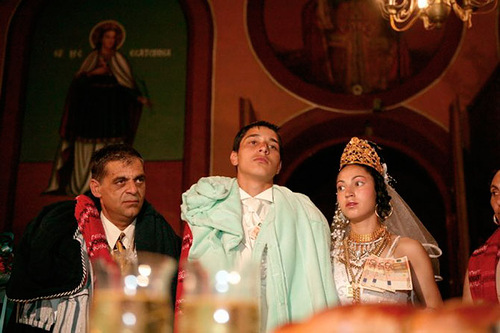 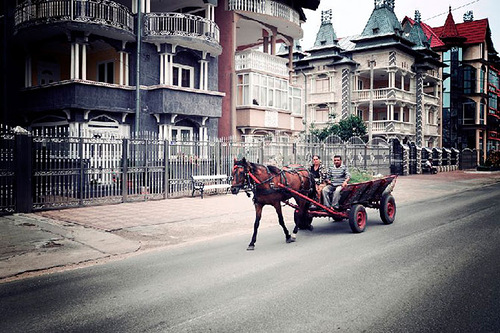 Rich, they remain faithful to their traditional way of life 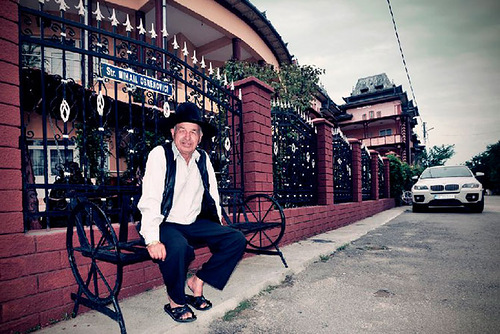 A man in slippers sitting on a bench in front of his house. The town of Buzesku 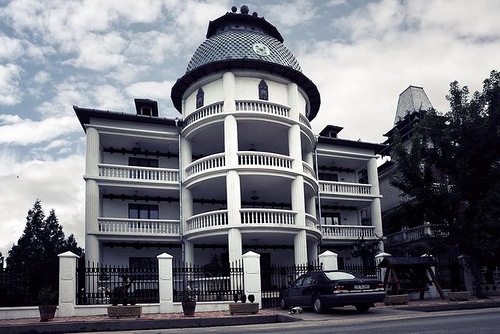 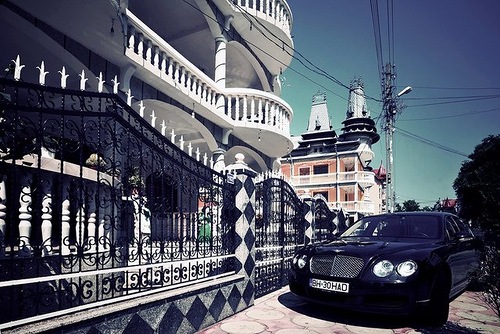 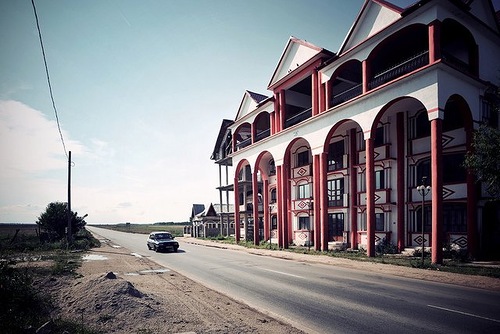 In the capital of millionaire gypsies, Buzesku 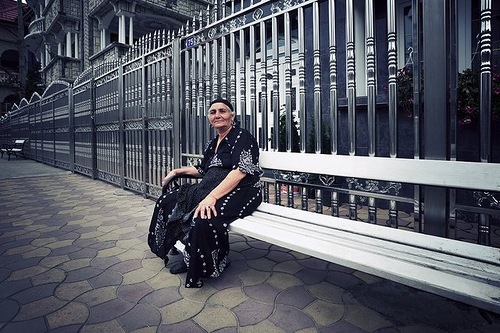 An aged Gypsy woman proudly sitting on a bench in front of her palace. Buzesku, Romania 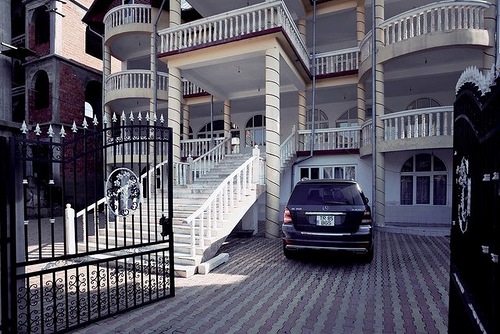 Stairs, balconies, and cars – pride of residents of Buzesku, Romania 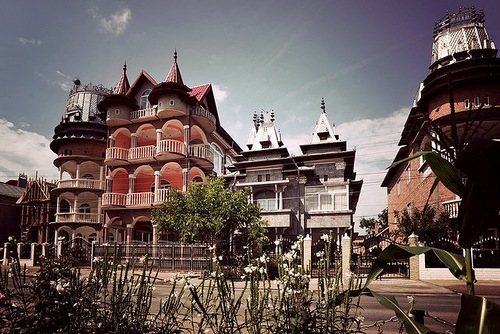 The capital of Gypsy millionaires – the town of Buzesku, Romania 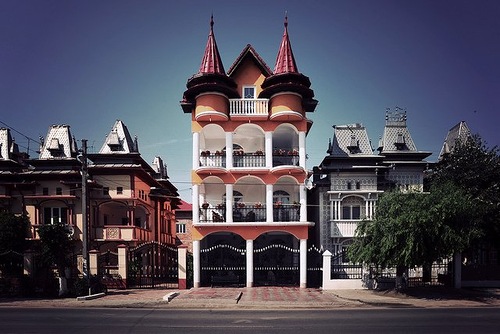 Paradise for local and invited architects – the town of Buzesku, Romania 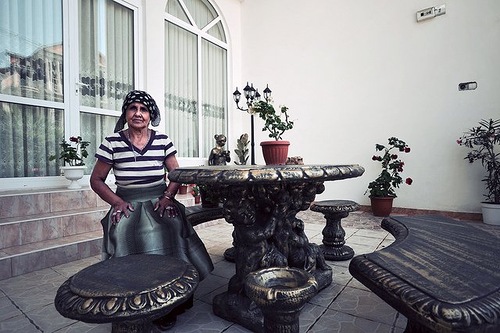 Even living in luxury, they look like simple Roma 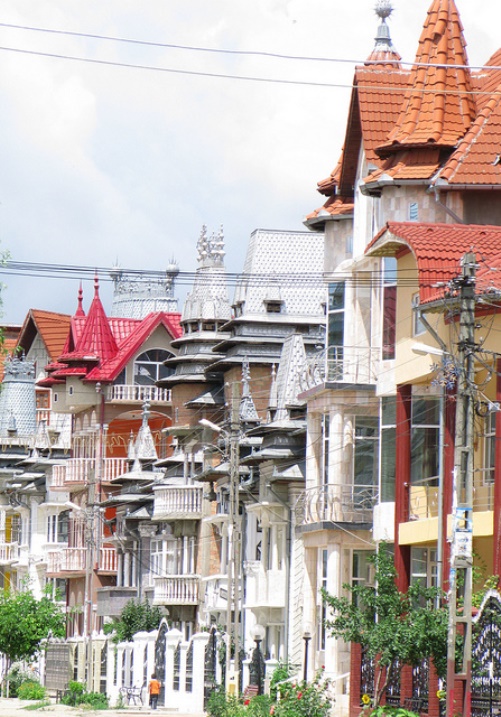 Meanwhile, houses stand close to each other without a single architectural style 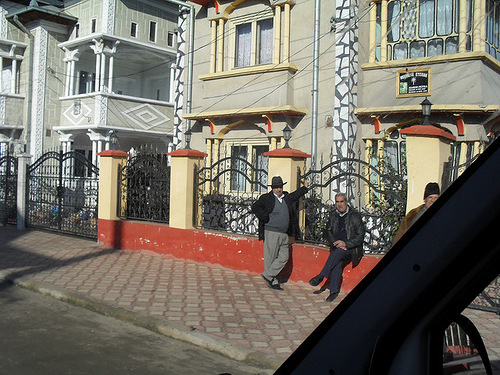 However, these men don’t look like millionaires. Gypsies living in the town of Buzesku, Romania 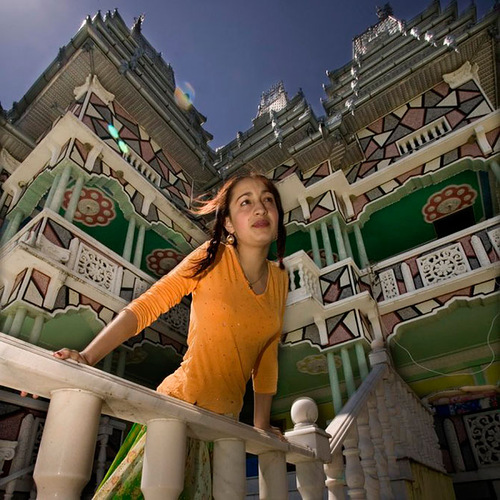 A woman posing on the background of her rich house. Romanian gypsies living luxury lifestyle