The Chair That Grew. Growing Architecture

The Chair That Grew. Growing Architecture
One day, in 1903, a friend of Krubsack’s openly admired a beechwood chair he had crafted. A man who perhaps didn’t know how to take a compliment, Krubsack announced, “Dammit, one of these days I am going to grow a piece of furniture that will be better and stronger than any human hands can build”. And fifteen years later, he had done just that, with every joint in his chair “cemented by nature”. Though many handsome offers were made for the famous chair, Krubsack refused to sell, eventually leaving it to his nephew to be displayed in his furniture store. The “Chair That Grew” was last seen at the entrance of Noritage Furniture, owned by Krubsack’s descendants. The store recently closed and the fate of the chair is unknown. However, it likely still resides somewhere in the tiny town of Embarrass, WI, not far from where it grew nearly 100 years ago.

The Circus Trees of Axel Erlandson

Where Krubsack was a pioneer, Axel Erlandson was a visionary – though he didn’t know it at the time. Axel Erlandson never intended to create a new genre of sculpture or become the father of an art movement. He just wanted to entertain his family.

A farmer in California, Axel Erlandson had noticed the curious ability of trees to naturally graft themselves together. So, in 1925 Erlandson began planning a series of trees that were deliberately grafted together for artistic effect. His first creation was the “Four Legged Giant,” four trees which he merged into a single truck, creating a kind of tree-gazebo.

In 1945, twenty years after Erlandson had begun his hobby, his daughter suggested to her father that he might open some kind of “Tree Circus” to showcase his unusual arbor creations. Erlandson did just that, creating over 70 unique arbor-sculptures in his Tree Circus. Among his creations were a tree that split into a cube, an arch tree and a six-tree woven basket.

The Tree Circus was a not much of a financial success, and in 1963 Erlandson sold the property, trees and all, and died shortly thereafter. It wasn’t long before all 70 trees were forgotten and by 1977 only forty of the unique specimens remained. These were all scheduled to be bulldozed to create a mall.

Luckily for the trees, and for the world, they were saved from this fate by Michael Bonfante, owner of Nob Hill Foods. Bonfante, a horticultural connoisseur, opened a theme park and in 1985 relocated the trees to what is now known as Gilroy Gardens.

Today, 25 of Axel Erlandson’s arborsculptural creations are on display at Gilroy Gardens, and his first creation, the Four Legged Giant remains alive and well some 80 years after Erlandson’s idea first took root.

Many of these marvels are the works of one dedicated person, but the mysterious Auerworld Palace took some 300 volunteers to create. Architect Marcel Kalberer and his group, Sanfte Strukturen, are re-envisioning the way living building materials and techniques can be used to design modern spaces – with willows.

Constructed in 1998, the Auerworld Palace in Aeurstedt, Germany may be the first modern “willow palace,” but the techniques Kalberer uses are ancient. Sumerian reed houses were famous for their construction of tightly bound reeds.

But where Kalberer and his team create buildings out of trees, Austrian artist and architect Friedensreich Hundertwasser has created a building inspired by, and incorporating, trees.

Hundertwasser wasn’t much fond of straight lines, dubbing them “the devil’s tools.” In fact, his famous apartment building, Waldspirale, does away with them entirely and is instead a celebration of nature’s sinuous loops and arcs. Located in Darmstadt, Germany, Waldspirale translates to “wooded spiral,” and that is exactly what it is. It hosts as many trees as human occupants.

Today a growing number of tree grafters, arborsculptors and botanical architects are working to create new organic forms. Among them is Richard Reames who coined the terms arborsculpture and arbortecture (he also has a book on the subject, order it here).

Richard grows and shapes tree trunks using the ancient arts of grafting, framing, bending and pruning. He believes that his living arbor-sculptures could one day replace many of the things that trees are typically killed to make.

Another absolutely wonderful tree grafter who has been working since before the form even had a name is Dan Ladd. Ladd crafts trees into whimsical shapes, and incorporates other objects into the trees. Ladd also practices the ancient art of gourd shaping. These are all gourds that were growing inside of forms. They have not been carved or altered after they were harvested

Meanwhile, among the many other artists working in the form are Konstantin Kirsch, Laura Spector, and Aharon Naveh.

The Chair That Grew. Growing Architecture 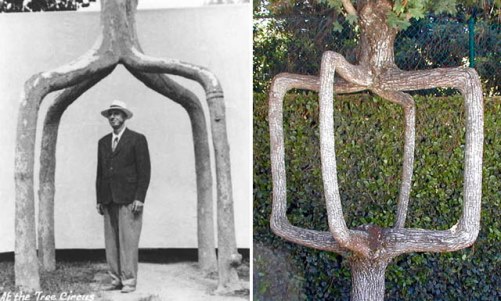 The Circus Trees of Axel Erlandson 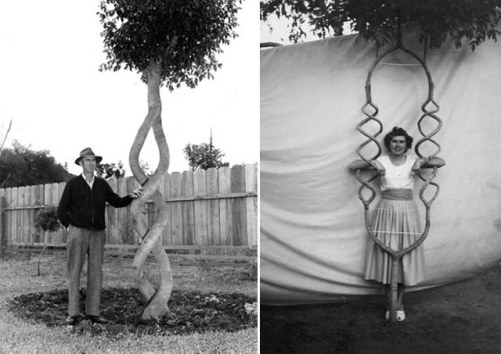 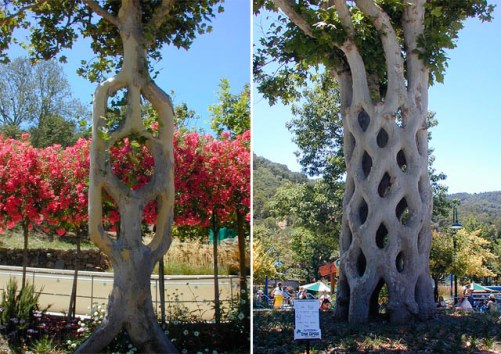 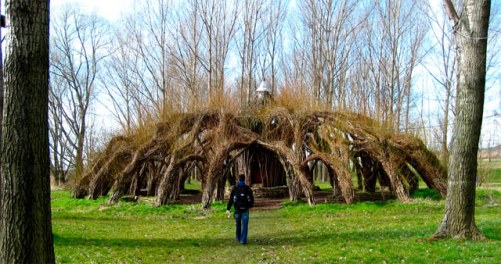 Marcel Kalberer and his group’s creation 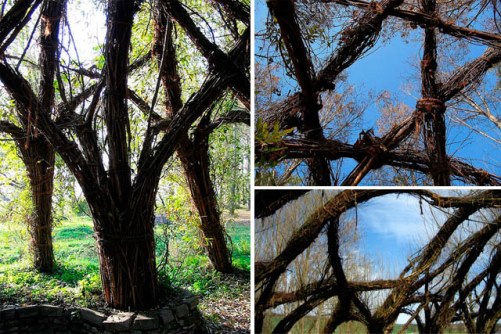 Constructed by Architect Marcel Kalberer and his group 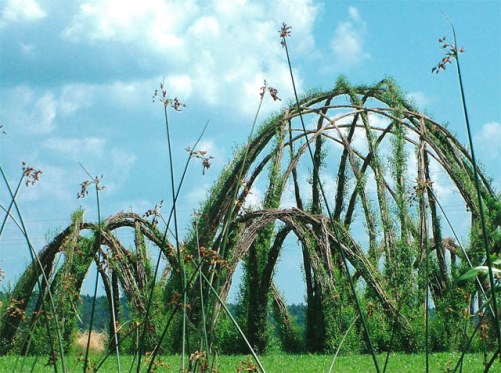 Construction by Architect Marcel Kalberer and his group 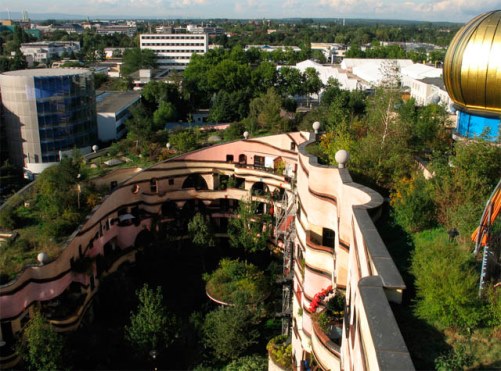 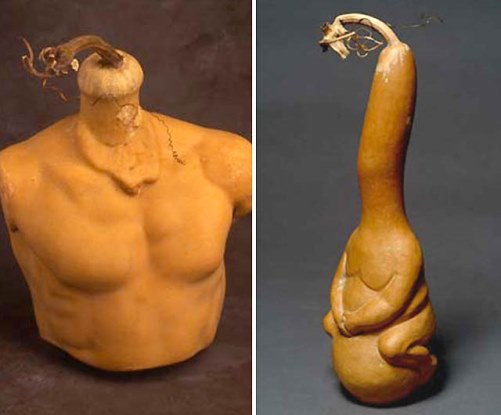 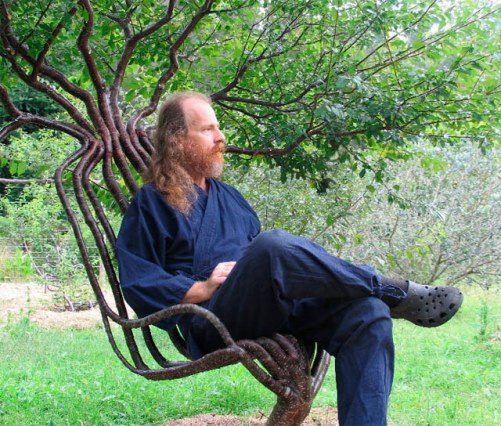 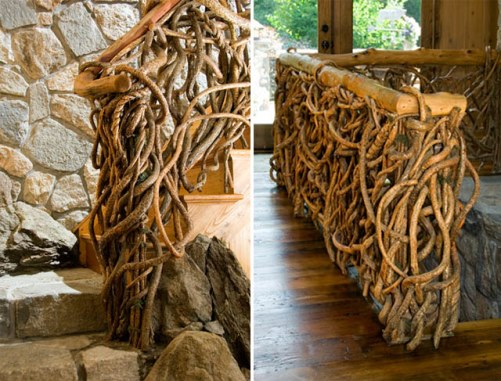 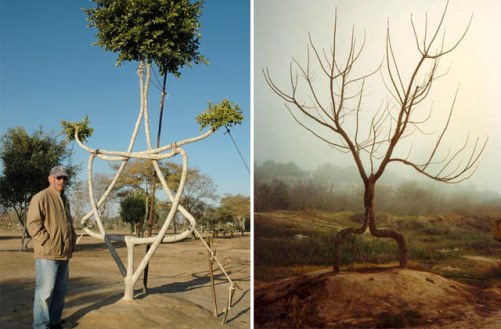 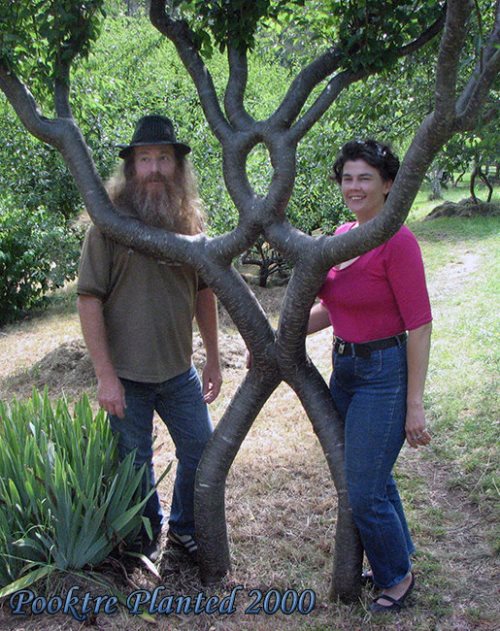 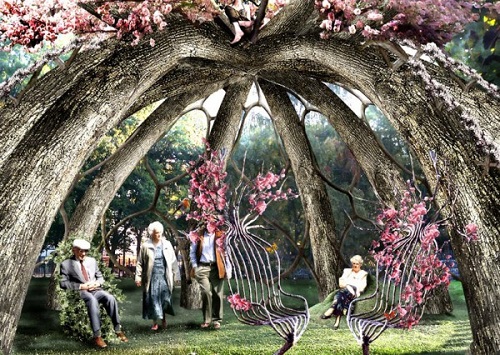