The eighth wonder of the world the Amber Room 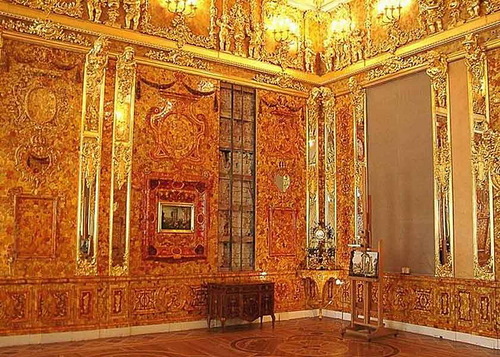 Created by the 300-year anniversary of the city of Saint Petersburg the copy of the famous, called The eighth wonder of the world the Amber Room

The eighth wonder of the world the Amber Room
Noteworthy, if the Amber Room had not disappeared during the Second World War, then in 2011 we would have celebrated the 310th anniversary of its history.
In fact, the fate of the “eighth wonder of the world” – dramatic events and the secrets of the Prussian kings and Russian emperors. Besides, architects and artists, the leaders of the Third Reich and the Soviet leaders. As well as philanthropists and businessmen, treasure hunters and prominent scientists. And, of course, master stone-cutters, standing both at the origins of the Amber Room, and revived it.
Meanwhile, by 2003, the titanic work of the Russian craftsmen has created the new room dedicated the 300-year anniversary of the city of Saint Petersburg. Besides, Russian President Vladimir Putin and German Chancellor Gerhard Schroeder were at the opening ceremony. 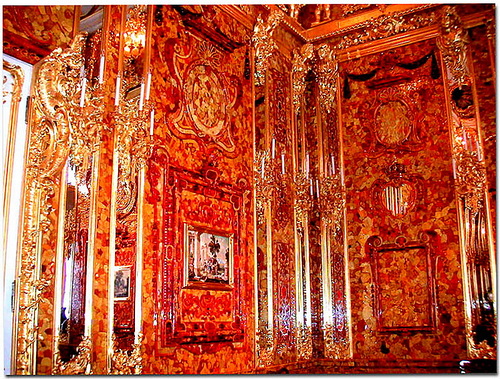 The Amber Room in the Catherine Palace of Tsarskoye Selo near Saint Petersburg. A complete chamber decoration of amber panels inlaid with several tons of masterfully carved high-quality amber, backed with gold leaf and mirrors

Originally, the Amber Room represented a joint effort of German and Russian craftsmen. Construction of the Amber Room began in 1701 to 1709 in Prussia. Designed by German baroque sculptor Andreas Schloter and constructed by the Danish amber craftsman Gottfried Wolfram, it remained at Berlin City Palace until 1716. Later given by Prussian king Friedrich Wilhelm I to his then ally, Tsar Peter the Great of the Russian Empire.

However, In Russia the room went through some improvements – expanded and renovatied, it covered more than 55 square meters and contained over six tons of amber. Looted during World War II by Nazi Germany, the Amber Room was brought to Kenigsberg. Unfortunately, the location of its whereabouts in the chaos at the end of the war remains unknown.

Meanwhile, in 1979 began the rebuilding of the Amber room at Tsarskoye Selo. In 2003, after decades of work by Russian craftsmen, financed by donations from Germany, the reconstructed Amber Room appeared in all its splendor in the Catherine Palace in Saint Petersburg, Russia.

Shortly after the beginning of the German invasion of the Soviet Union in World War II (Operation Barbarossa), the curators responsible for removing the art treasures in Leningrad tried to disassemble and remove the Amber Room. Over the years the amber had dried out and become brittle, so that when they tried to remove it, the fragile amber started to crumble. The Amber Room was therefore hidden behind mundane wallpaper, in an attempt to keep Nazi forces from seizing it. However, the attempt to hide such a well-known piece of art failed.

The Amber Room, never seen again, have occasionally appeared in sensational reports stating that components of the Amber Room survived the war.

The eighth wonder of the world the Amber Room 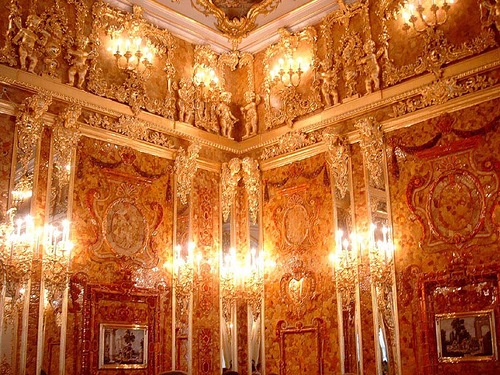 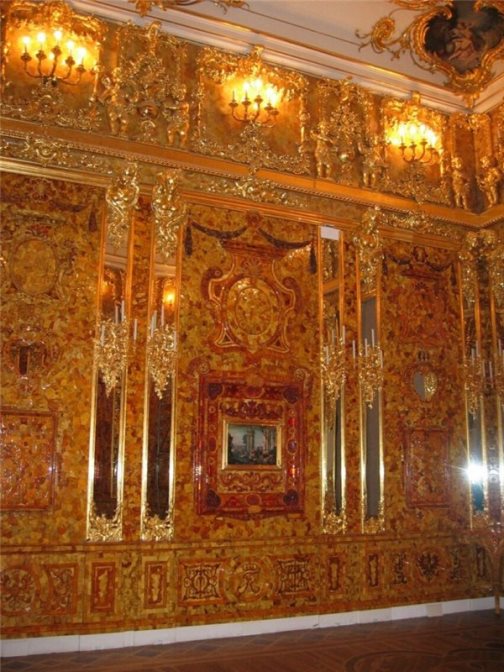 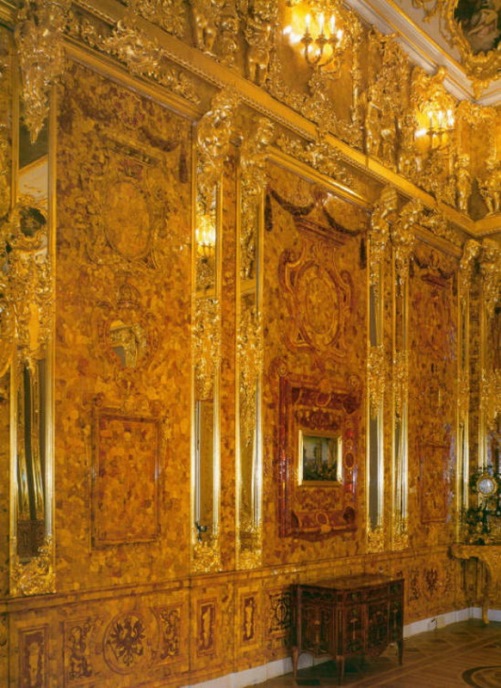 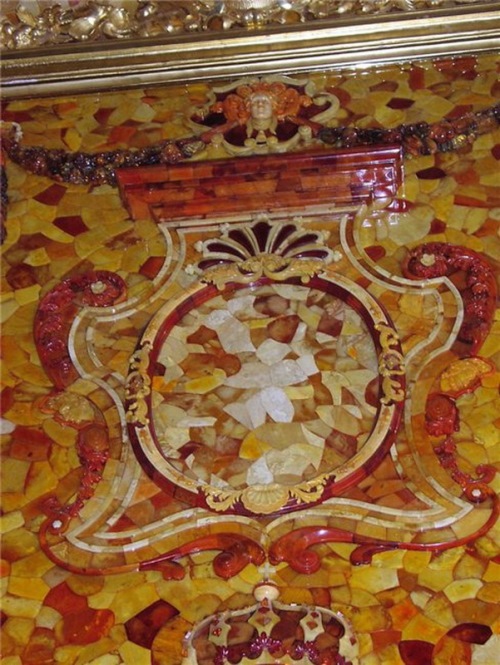 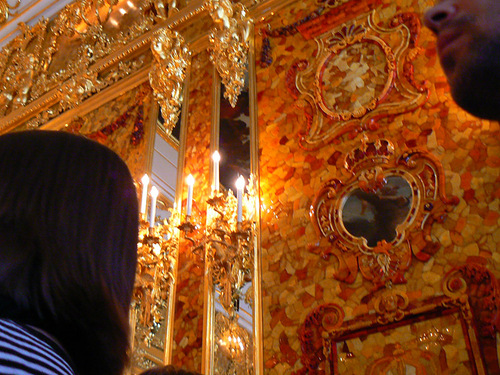 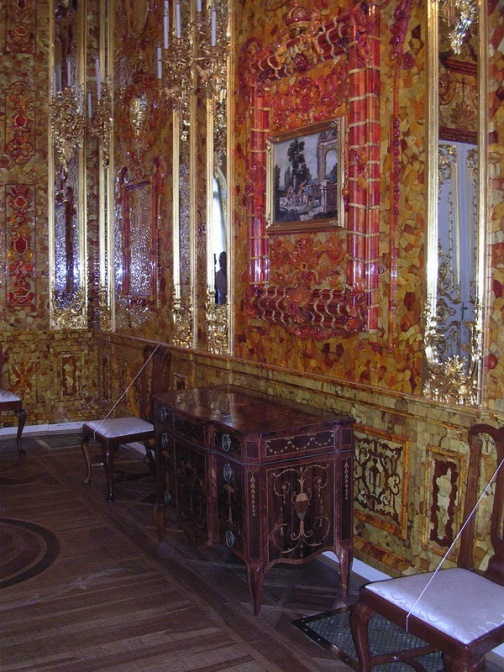 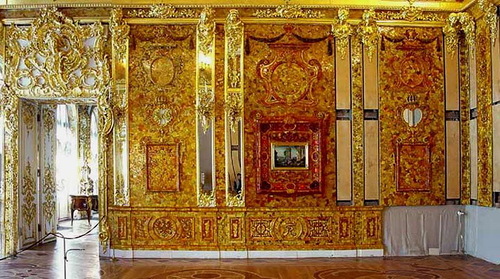 Made of Amber Room 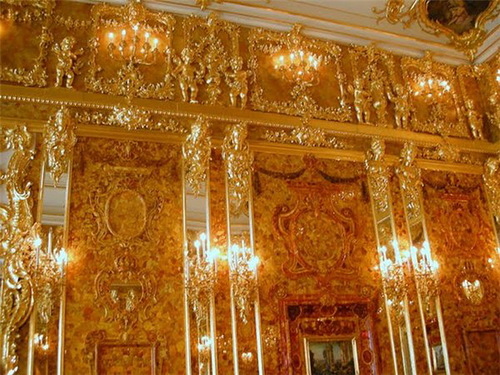 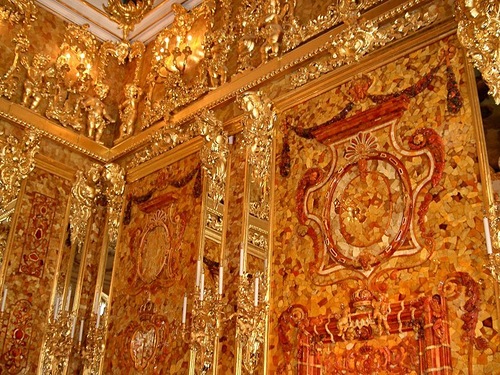 Made entirely of amber 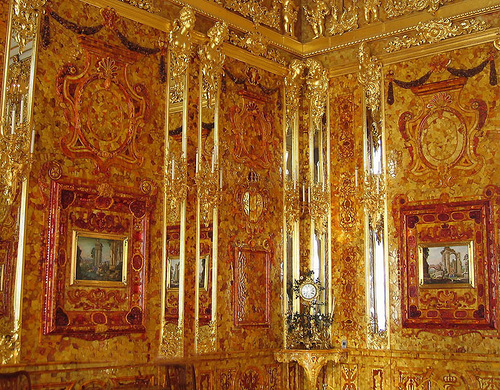 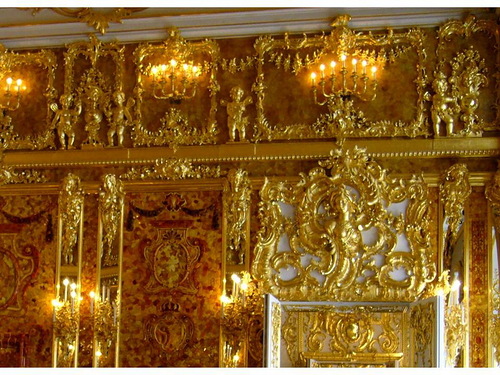 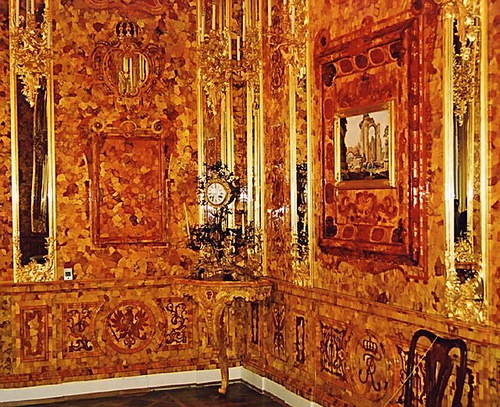 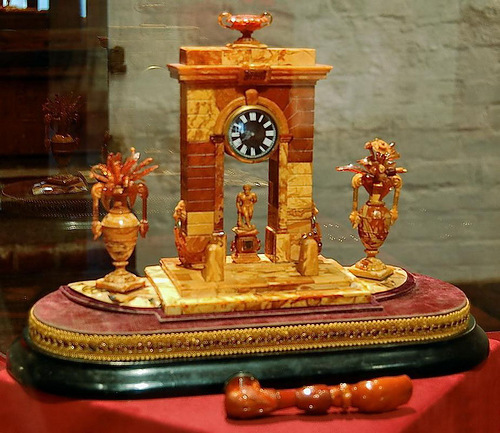 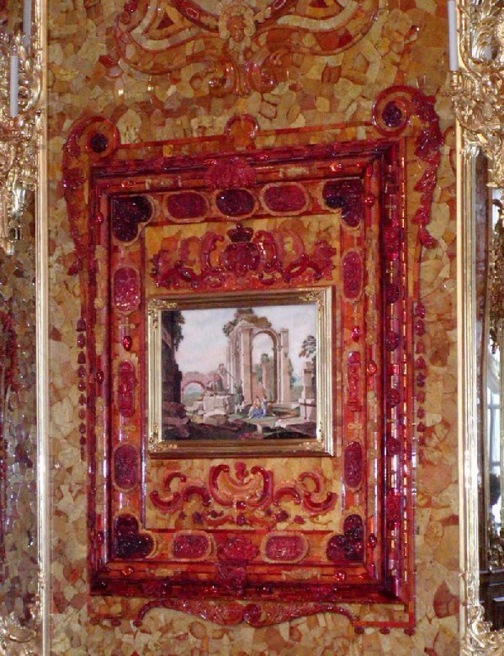 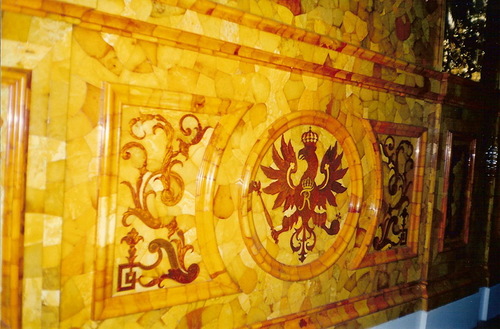 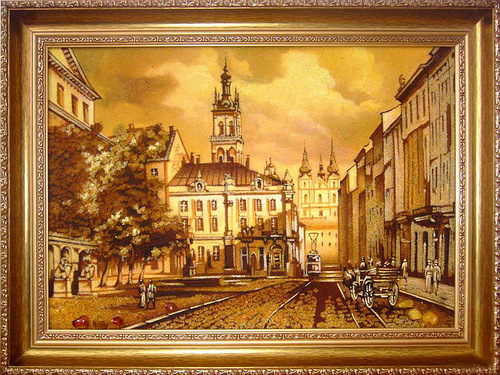 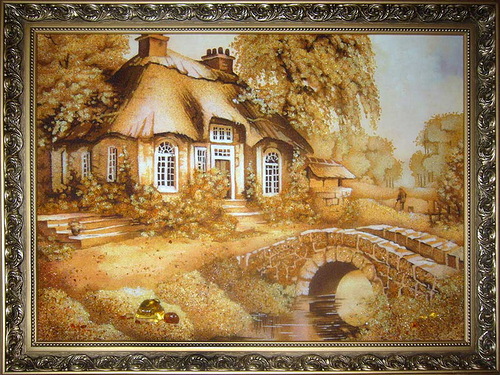 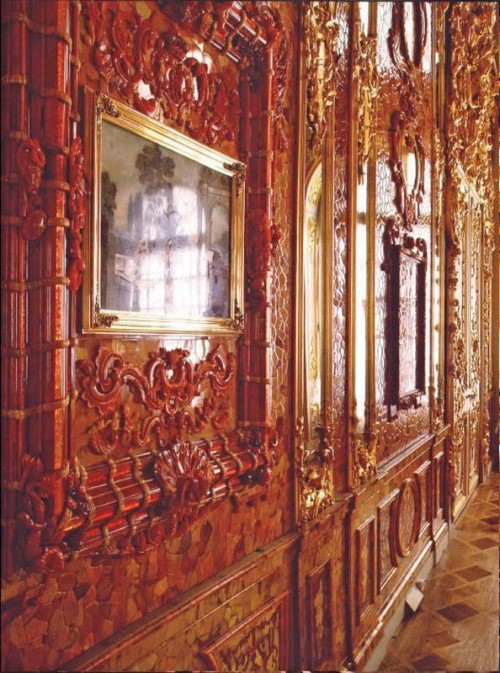 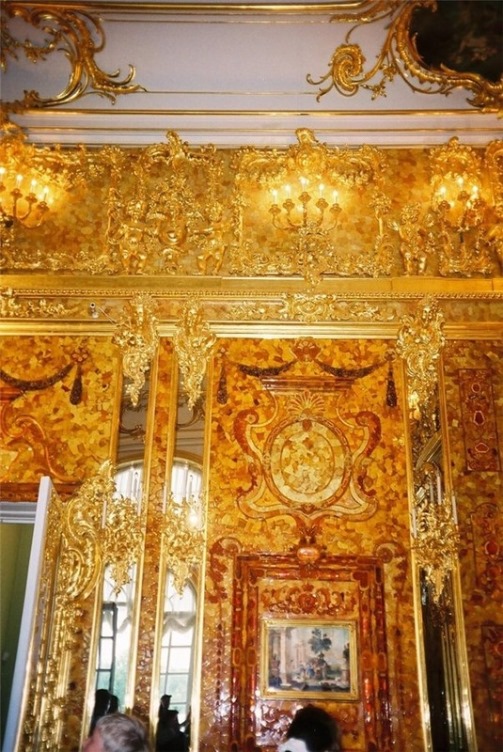 The room attracts lots of Visitors 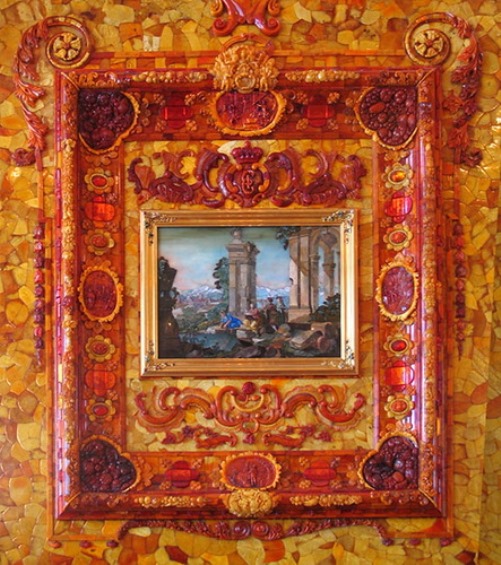 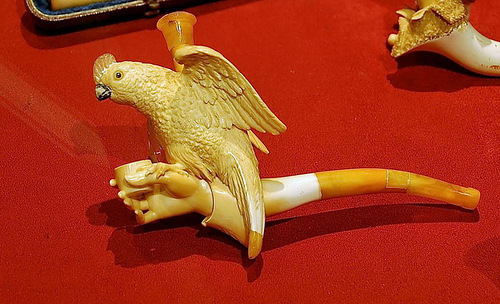 Smoking pipe of amber, decorated with a miniature sculpture of a parrot 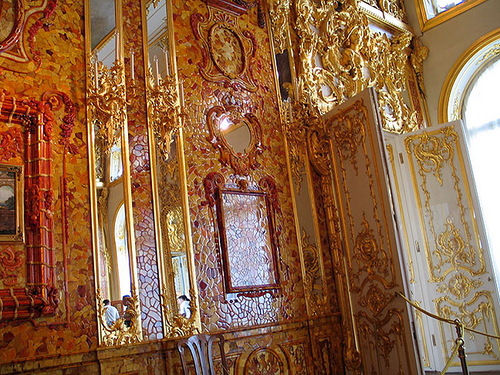 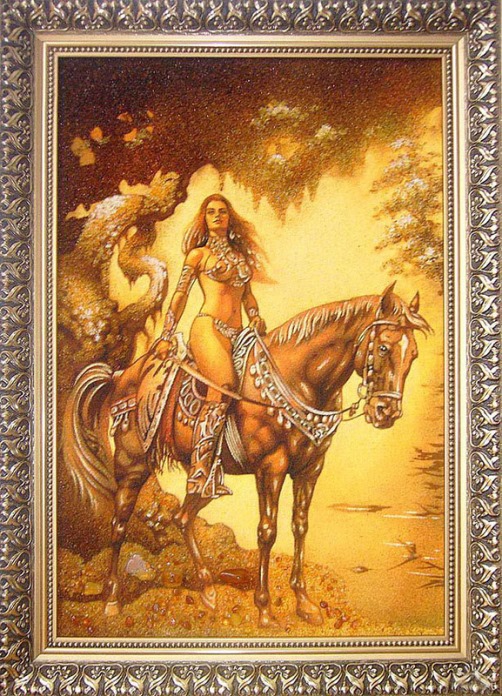 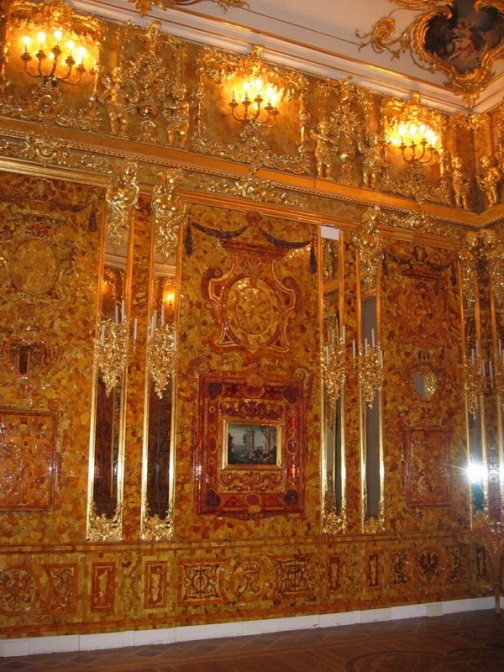 Rightly called The eighth wonder of the world, Amber room

Work of jewelers and sculptors 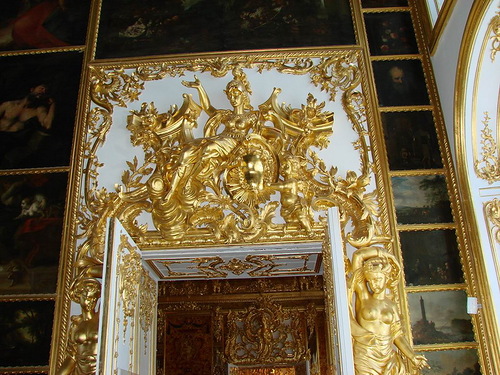 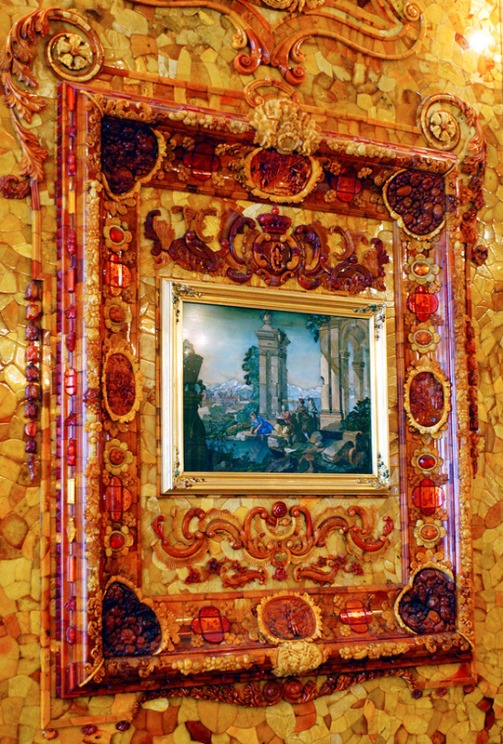