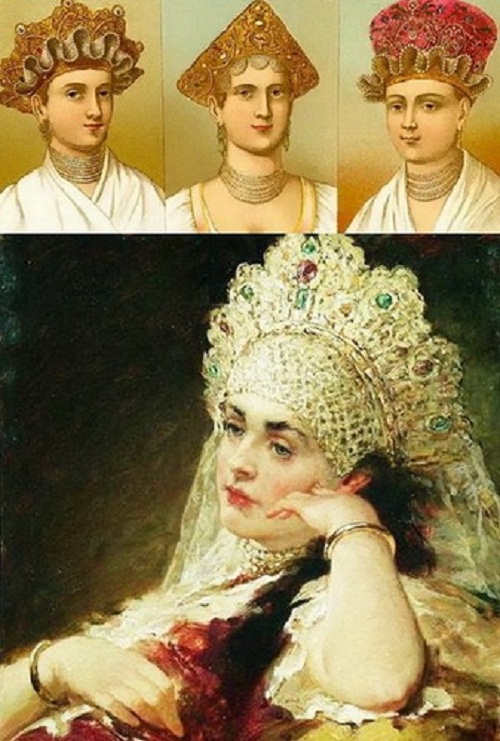 Traditional jewelry in ancient Russia
An integral part of the culture of our ancestors, Russian folk costume has preserved to us through the centuries. In fact, the folk costume determined social class of a person, and therefore, had special importance. In Russia, traditional jewellery was pearl, produced in kidney-shaped shells, and mined in northern rivers. Noteworthy, its size ranged from small grains to peas diameter 10-14 mm. From freshwater pearls made earrings and necklaces, it adorned hats and clothing. For example, during great festivals in Zadonsk and Zemlyansky districts of Voronezh region, women used to wear lots of pearl necklaces, and width of rods could be up to ten of these threads. Pearls in large quantities preserved in folk costume until the beginning of XX century. 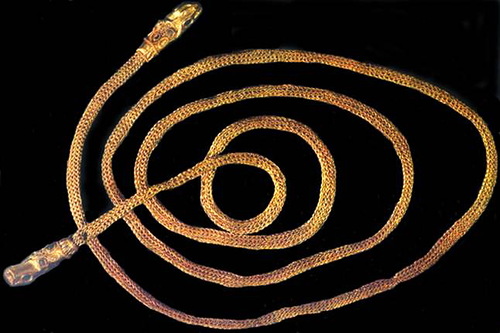 Kolodochka (tow) – tightly-woven beads or chain that simulates body of a snake. Widespread in Kaluga, Ryazan and Tula, as an ornament for girls and young women. And Lariat (coil, snake) – this is the long version, served as beads, or a belt.

Gaitan (Gerdan, Ethan, Gita, koroleska, pochepka, chapochka) – breast, sometimes back decoration, made first of twisted metal rings, like a chain with a cross or an icon, then added artful weaving out of beads or threads. Now, Gaitana are long (up to waist), width of 10 cm, a strip of beads. The two ends are connected with glass beads suspension with ornament – a medallion beaded tassels, in ancient times with “vstavaranka” (bones from the chicken wing).

Butterflies is a metal rod with two blades, delicate, braided with pearls in the form of a butterfly’s wings, strung on horsehair or thin wire and attached to the bottom of the teardrop pendants or bell. Metal base made ​​mostly of brass – an alloy of copper and zinc and other elements, the shackle made ​​of silver. The shape of pearl earrings formed by the end of XVIII century. In the XIX century, became a substitute for natural pearls, pearl beads, and glass beads. 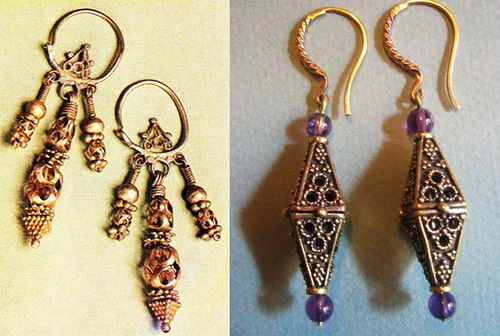 Odintsy, dvoychatki, Triad – came about the XV century, hanging earrings with 1, 2 or 3 rods with carnelian, bone, mother of pearl beads or cylinders, beads, pearls. Were common in Kaluga, the northern and central parts of European Russia. 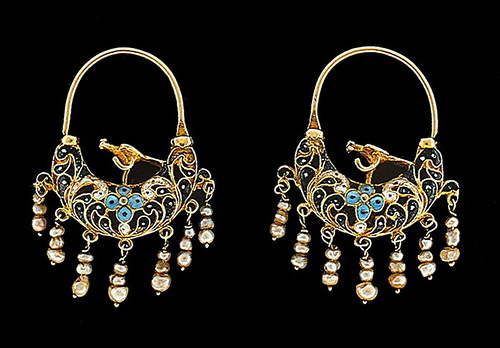 Pyasy – approximately XIV, massive suspension on the Shvenzy ring with bells at the bottom. Shvenzy ring was attached to the tapes or headgear, or fastened to the ear. Later, they were made of beads. 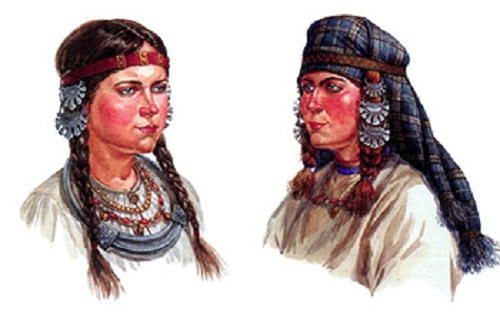 Temple rings used in the 13th century, found in Vyatichi Burials, Moscow region. Made of Bronze, silver or gold. Women’s jewelry woven into the hair at the temples

Known since the Bronze Age, but in the 13th century, began to withdraw from circulation. The shape of the rings can identify tribe to which they belonged, and the owner or the area in which she lived (the union of tribes). 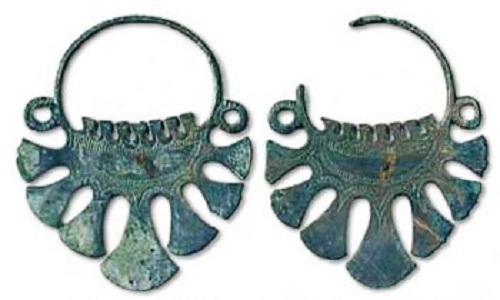 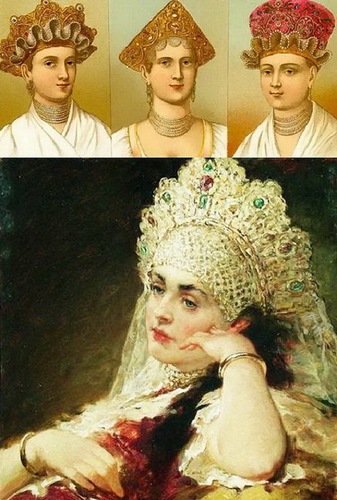 Kolt (Koltushi, koltki) – alloy suspension of gold or silver ribbon at the temporal part of the headdress, replacing earrings, and served as amulets 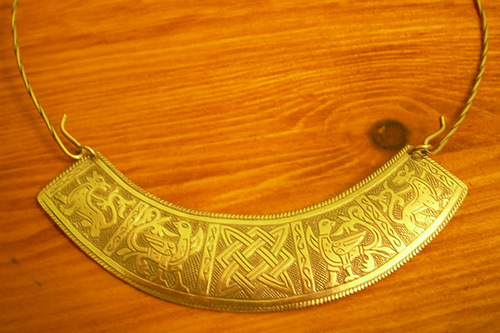 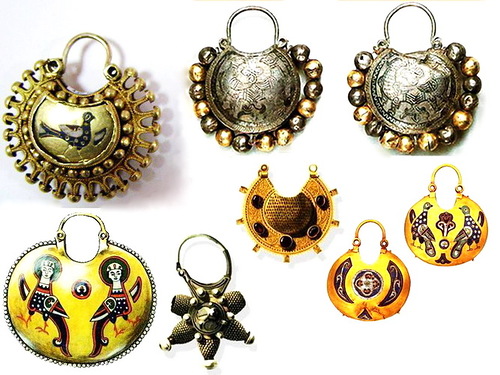 Round Koltushi decorated with images of birds, mythological Sirin, tree of life, and later christian motifs

Gribatka – like Gaitan, only strips of beads or chains are divided with ornament, like the main medallion on flat stretches 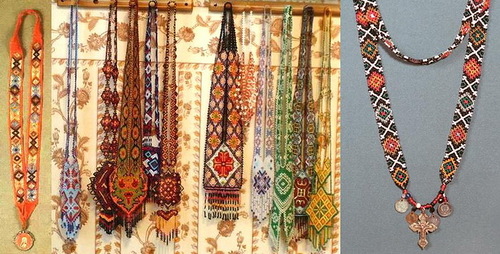 Breast or back decoration Gaitan 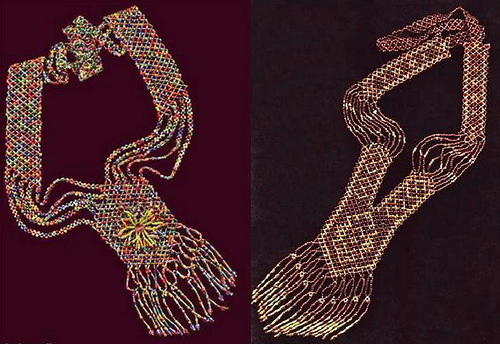 Golubtsy (from the word Pigeons), eagles, XVI-XVII century – massive earrings resembled the silhouette stylized figures of one or two birds facing each other backs 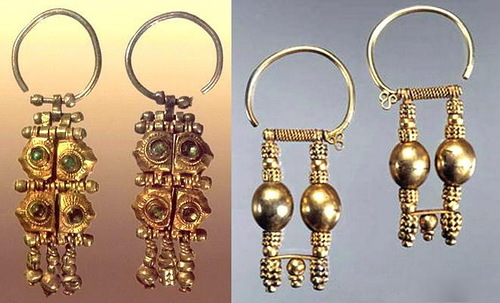 Dvoychatki (from the word “dva”, or “two” in English) 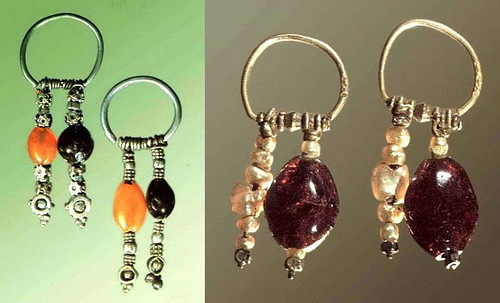 Hanging earrings with 1, 2 or 3 rods with carnelian, bone, mother of pearl beads or cylinders, beads, and pearls 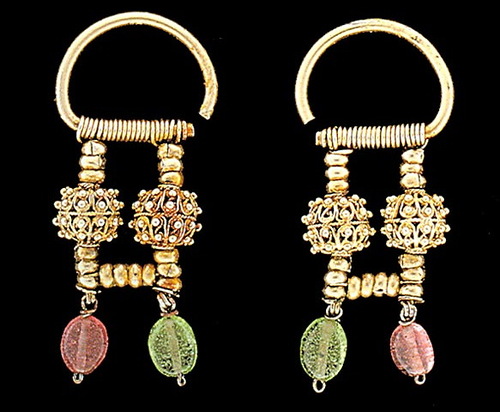 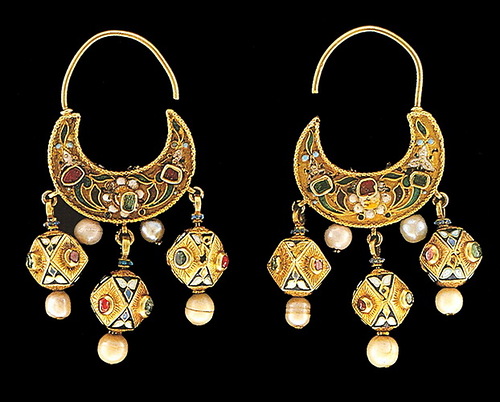 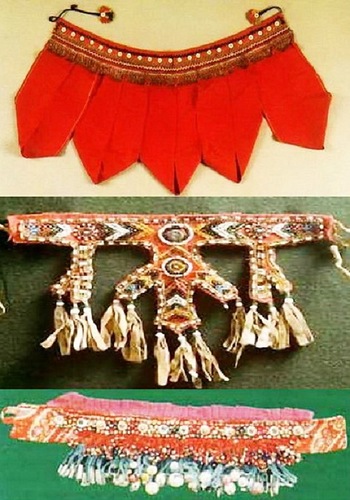 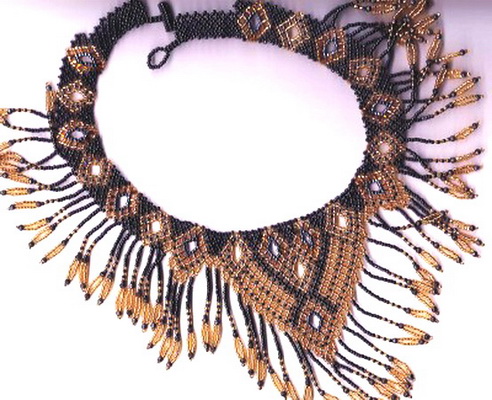 Shvenzy rings attached to the tapes or headgear, or fastened to the ear 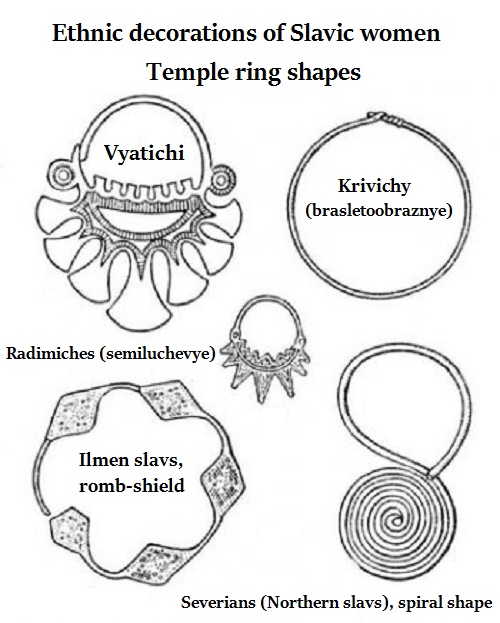