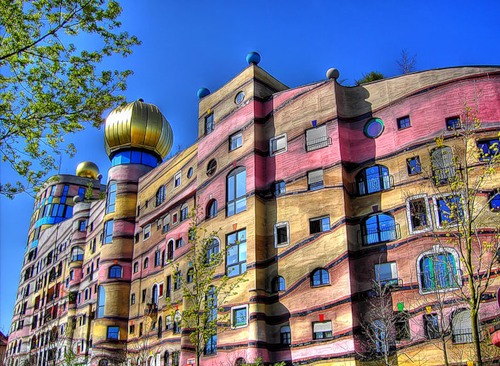 Unique architecture by Friedensreich Hundertwasser. Austrian artist Friedensreich Regentag Dunkelbunt Hundertwasser was born on December 15, 1928 in Vienna (died February 19, 2000). Friedrich Stowasser became one of the best-known contemporary Austrian artists, although controversial, by the end of the 20th century. Although Hundertwasser first achieved notoriety for his boldly-colored paintings, he is more widely known for his individual architectural designs. These designs use irregular forms, and incorporate natural features of the landscape. 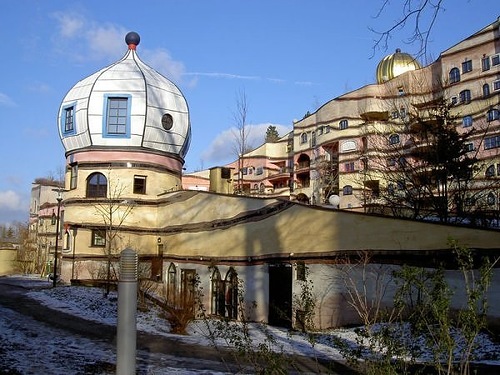 Hundertwasser believed that one can not live in the same houses – boxes, people feel bad from it. Each tenant has the right to lean out of his window and paint or otherwise modify a wall around him. He led several projects for the rehabilitation of former factories – dull boxes, which he turned into fabulous towers. Like Gaudi, Hundertwasser widely used battered ceramic tiles: made of it mosaics brightened up this dreary and flat surface. 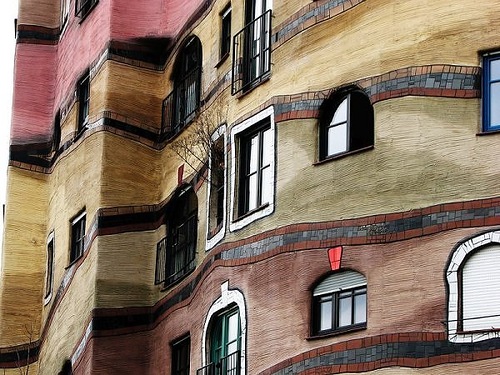 He also pushed onto the home gold or blue domes, cupolas, breaking the monotony of the roof line, and equipped the walls of niches for trees. The most famous such project – KunstHausWien – Exhibition Hall in Vienna. The idea with the “Tree – tenants” is not accidental. Hundertwasser believed that the grass and trees should be provided a place in the house and on it – at least some compensation for the damage that industrial society inflicts nature. 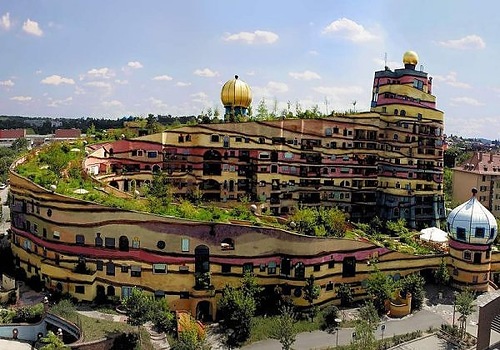 Of entertaining facts, it is worth noting that Hundertwasser always wore different socks. And when people asked him, ” Why are you wearing different socks? ” He always replied: “Why, in fact, you’re wearing the same?”
Creativity of Hundertwasser is bright and rich, radically different from the traditional art. His work is illogical from the bell tower of engineers and architects. However, this did not prevent him to create his own original-space architectural decorative direction.

Painter, sculptor, architect, designer, philosopher, environmentalist, world citizen and impetuous creator – this is great Friedensreich Hundertwasser! Free from any conventions tramp fanatic of Art and mother -Nature, revolutionary provocateur in the world of architectural laws, brilliant and eccentric artist and cosmopolitan, who left behind bright spots of creative and architectural heritage. Seeing his painting, architecture or just sketches, one can become the same fanatic, obsessed with unusual forms and color combinations. 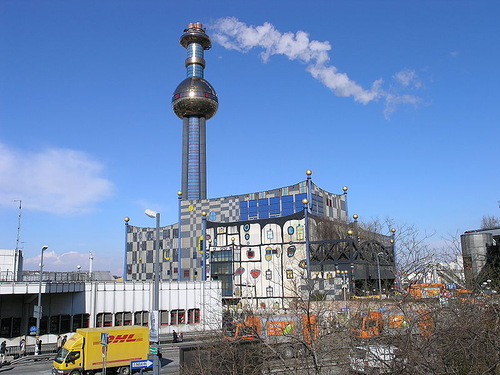 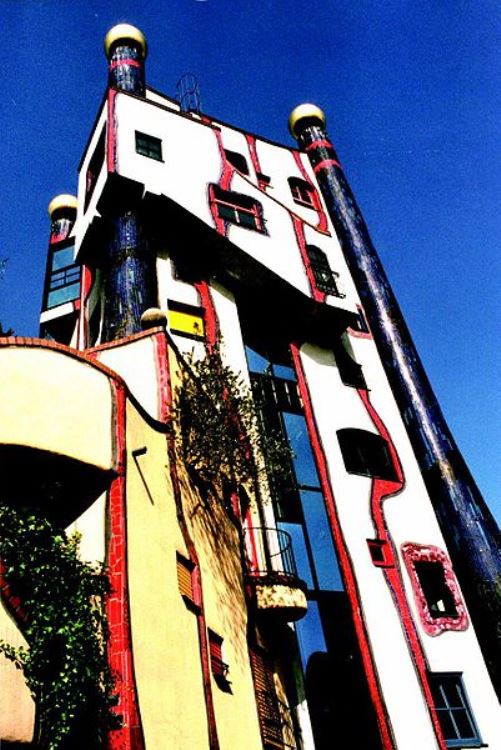 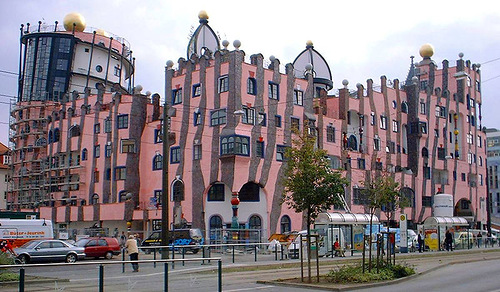 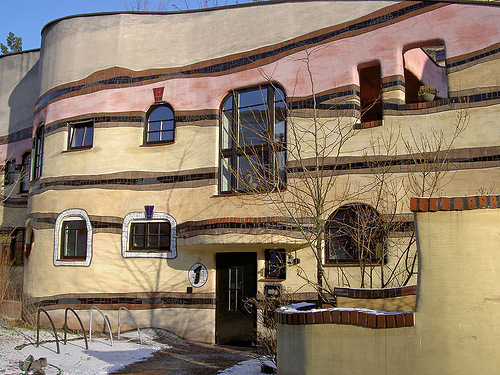 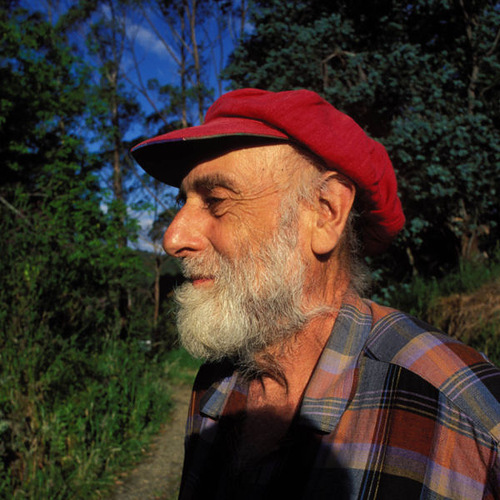 Hundertwasser in New Zealand in 1998 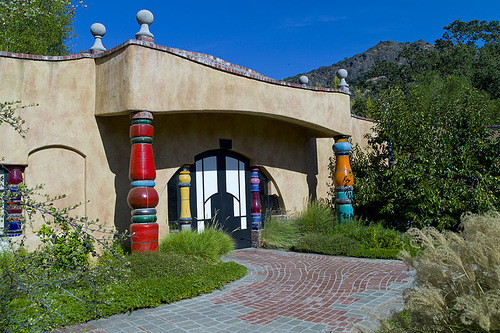 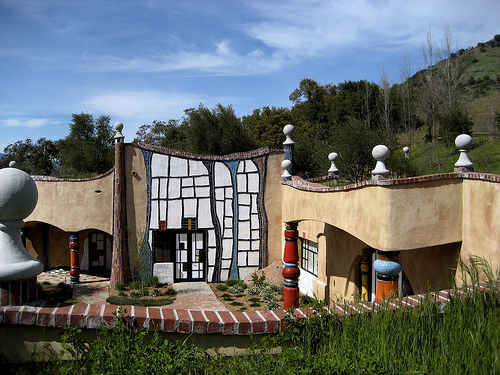 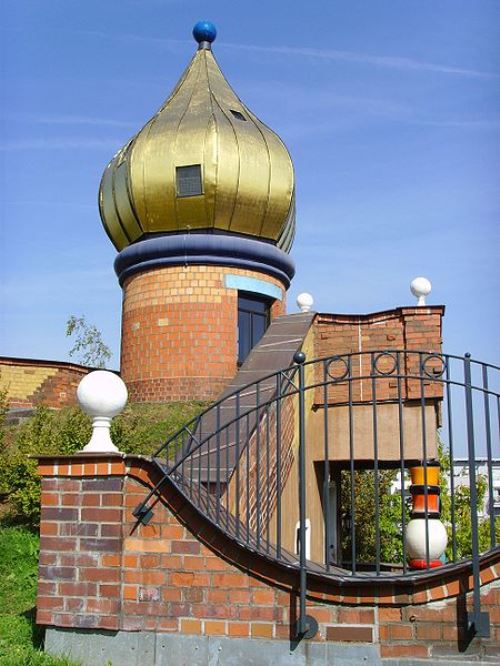 Roof garden of a Kindergarten in Frankfurt-Heddernheim 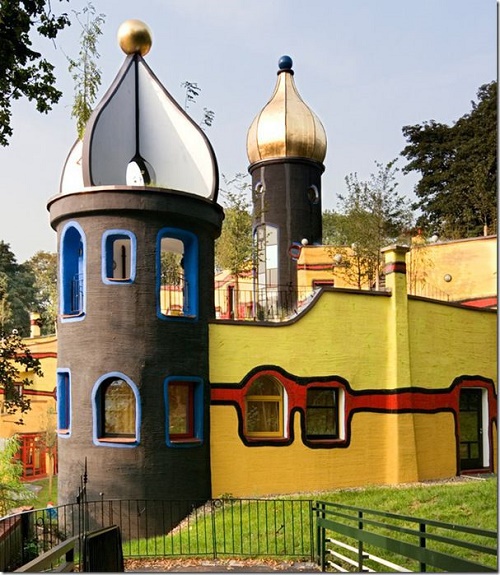 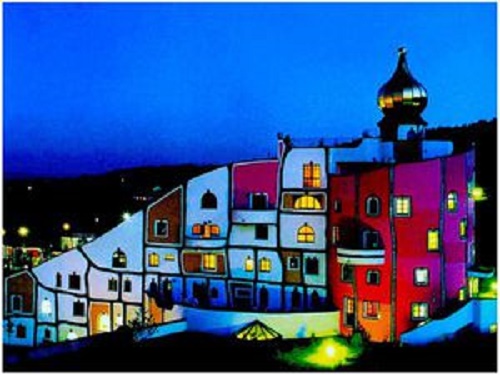 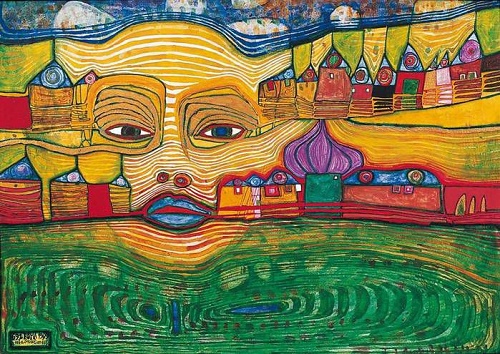 Every one draws his own world, and decides where to live, with whom to live, and most importantly – how to live. Friedensreich Hundertwasser