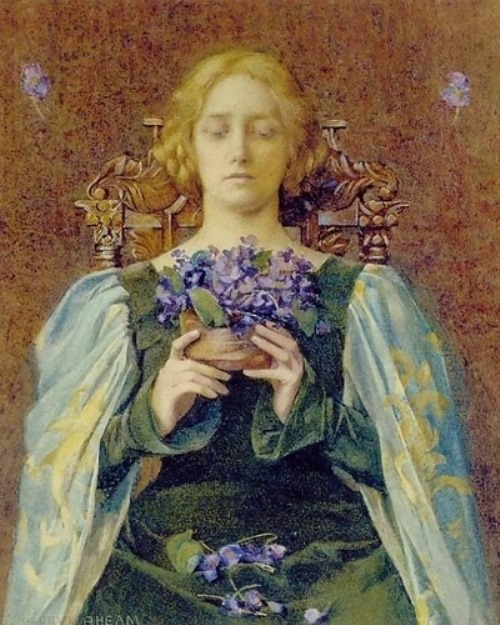 Delicate flower Viola origin, legends and meaning
The Greeks highly treasured violets and the Athenians considered them as the symbols of their city. According to belief, Ion, the legendary founder of Athens, was leading his people to Attica and the water nymphs welcomed them. Noteworthy, the nymphs gave them violets as signs of their good wishes. Meanwhile, the flower became the city’s emblem and hardly anyone could find an Athenian house, altars, weddings without violets. 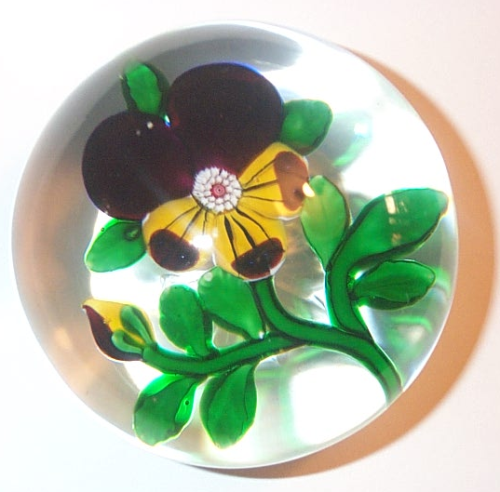 In fact, violas have over 200 common names, and a large number of them relates to sex and love. The name Violet is from ‘Vias’ meaning ‘wayside’.

Called the “Flower of Modesty” because it hides its flowers in the heart-shaped leaves. Also called “Our Lady’s Modesty”, because according to belief, it blossomed when Mary talked to Angel Gabriel. In particular, when Angel Gabriel had come to tell her she was to bear the Son of God, “Behold, I am the handmaid of the Lord.”

The monks of the Middle Ages called ~Viola tricolor,~ common in Europe, the ~Herb of the Trinity~ (~herba trinitatis~) because they saw the symbol of the trinity in their three colors. The name ~Heartsease~ stemmed from its old use as a medicine to treat heart disease. People believed God gave the plant heart-shaped leaves for that use. The name may also come from its ancient use as an aphrodisiac and a love potion.

According to one legend, it was Venus who made the violet blue. She had been disputing with her son Cupid as to which was more beautiful… herself or a bevy of girls, and Cupid, with no fear of his mother, declared for the girls. This sent Venus into such a rage that she beat her rivals till they turned blue and violet.

Meanwhile, a Greek legend tells of a nymph named Lo, who was beloved by Zeus. To hide her from his wife Hera, Zeus changed Lo into a white cow. When Lo wept over the taste of the coarse grass she had to eat, Zeus changed her tears into sweet-smelling violets that only she could eat.

Violets figured prominently in the worship of Attis and Cybele. Attis was a shepherd loved by the Phyrigian Mother of the gods, Cybele. His death was due to a boar but in the more popular legend of his death, he emasculated himself underneath a pine tree and bled to death. And Violets sprang from his blood. The priests of Cybele ritually self-mutilated themselves in the same manner. During the spring festival of Cybele and Attis, people cut down a pine tree and bring it to the temple, then swath in violets. During the third day of the festival the ~Day of Blood,~ the high priest would cut his arms and offer the blood as a sacrifice. And the novices would castrate themselves underneath the violet-covered tree.

According to mythology, the daughter of Demeter, the Earth Mother, was playing with her companions, gathering lilies and violets, when Pluto saw her. Then he carried her off to live with him in the underworld.

A similar English myth tells us that King Frost felt lonely in his huge ice palace where everything was frozen and lifeless. He sent his courtiers out to look for a lovely girl to melt his heart and bring him happiness. The courtiers found a very shy maiden named Violet and presented to the king. He immediately came under the spell of her charm and fell in love with her. Although once a strict and passionless monarch, he slowly became gentle and warmhearted and vowed to his people that the harsh and endless winters of his realm would become milder for one half of each year. Such was the tender effect that Violet had upon the king.

Violet pleaded with the king to allow her to see her people again and because of his love for her, he granted her wish to visit them each spring. His only condition was that she could only return to them in the form of a flower for part of the year, coming back to her husband’s icy realm each winter.

Common saying about the violet is ~Dream of violets and advance in life.~ It is said that a garland of violets worn about the head prevents drunkenness. They are considered a good luck gift, but when violets bloom in autumn, epidemics or death will follow within the year.

Like the Greeks, Romans would decorate banquet tables with violets in the belief that the flowers could prevent drunkenness. Violet wreaths were used by the Romans to relieve hangovers. They drank a wine made from violet blossoms. They also placed violets on the graves of small children.

The ancient Persians and Greeks used the violet to heal the heart and the head. An infusion of violets in hot water helped to ease a broken heart. Greeks used the plants to help induce sleep, and to calm anger. It was used as a symbol of innocence and modesty.

Medieval Christians believed violets were once strong, upright flowers until the day, the shadow of the cross fell upon them on Mount Calvary. Forever after they bowed in shame at what man had done. In connection with this legend, violets were often used in Good Friday ceremonies. However, while the violet is usually noted as being modest, Sir Walter Scott once characterized it as a ~boastful queen of the forest flowers.~

According to the Welsh, if a man had been beaten, violets would supposedly divine whether he would live or die. A bruised violet was bound to his forefinger; if he fell asleep, he would recover. Otherwise, he would die. 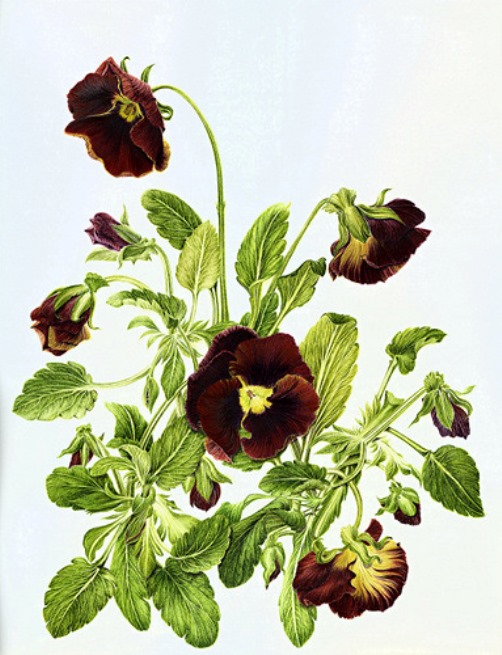 Napoleon Bonaparte loved the violets. When he married Josephine, she wore violets and on each anniversary Napoleon sent her a violet bouquet. Josephine maintained an extensive garden of violets which, became the rage in France. In 1814, Napoleon asked to visit Josephine’s tomb, before being exiled to the Island of St. Helena. There he picked the violets that were found in a locket around his neck after he died. The French thus chose the violet as their emblem, and Napoleon was nicknamed ~Corporal Violet~ or ~Le Pere Violet~ meaning ~the little flower that returns with spring.~

Postcards picturing a bunch of violets flooded France, but when scrutinized closely, the violets in the bouquet revealed the outlines of portraits of Napoleon, Maria Louise and of their three year old son, Charles, King of Rome. Later Napoleon III adopted the violet as the symbol of his regime. The day he met his future wife, Eugenie, she expressed her favor of him by wearing a violet gown and violets in her hair at a ball. She carried violets at her wedding and received bouquets of them at her anniversaries. Because of all the Napoleonic interest in violets, France became a leader in developing and cultivating new varieties of violets and pansies. 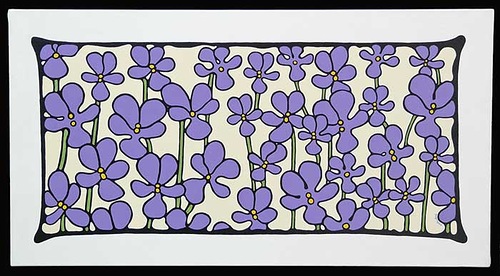 Mohammed considered them his favorite flower. A 10th Century English herbal said the blossoms could chase away evil spirits. Ancient Britons used the flowers as a cosmetic, and Celtic women mixed violets and goat’s milk to concoct a beauty lotion. It is also believed to encourage fleas to move into the home.

Violets are also considered to be funeral flowers. It was thrown in graves for remembrance in rural England. The mourners also carried violets to protect themselves against poisonous exhalations while in the cemetery.

In ancient Greece, so many violets were placed in a grave that they almost completed concealed the body, and they were also scattered about tombs. Persephone was gathering violets the day she was kidnapped by Pluto and carried off to the Underworld. Josephine had them showered on her coffin when she died. Napoleon the Little was buried under a pall of woven violets. Because of their association with death, violets became a flower of ill omen. 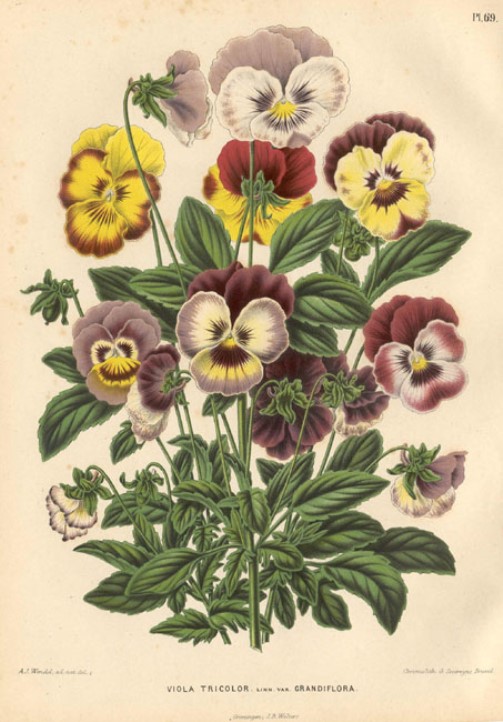 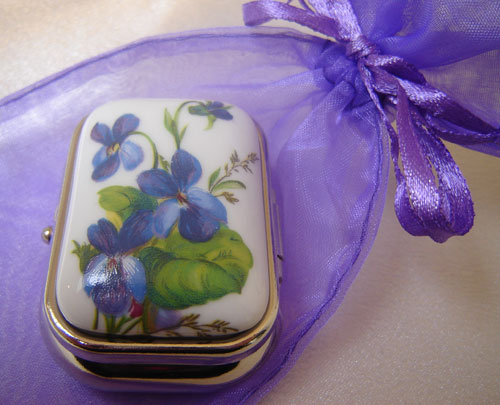 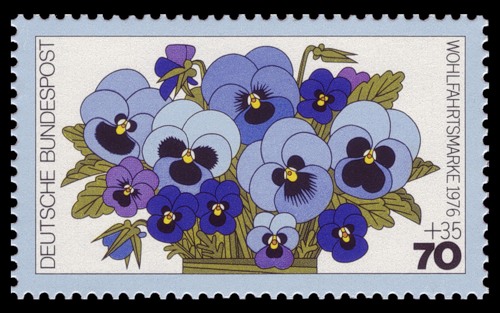 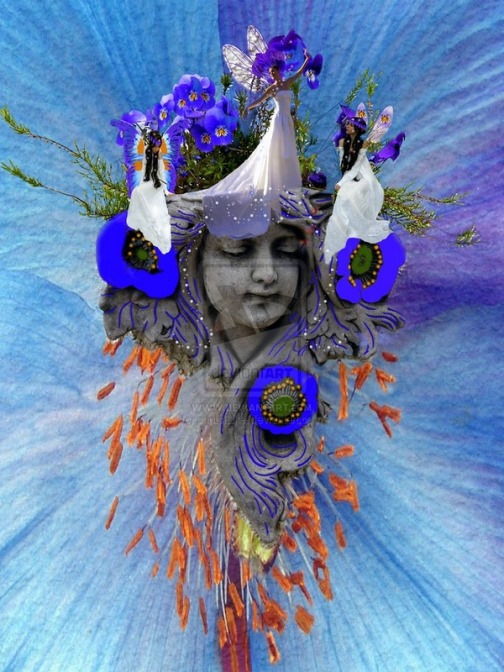 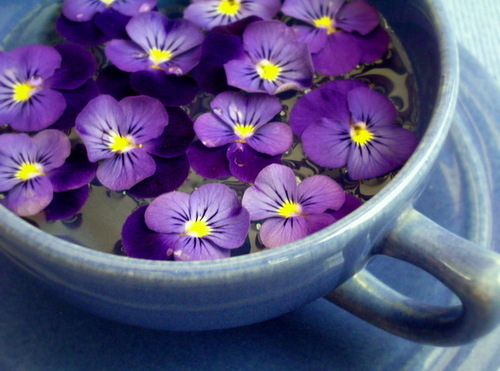 A cup with Viola flowers 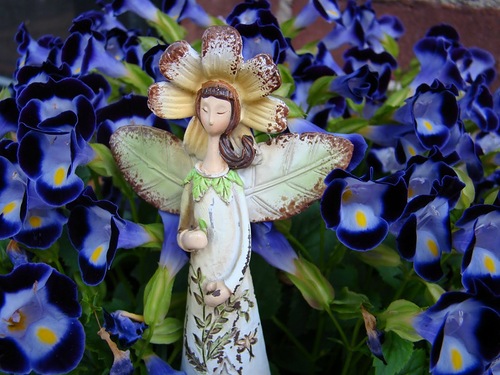 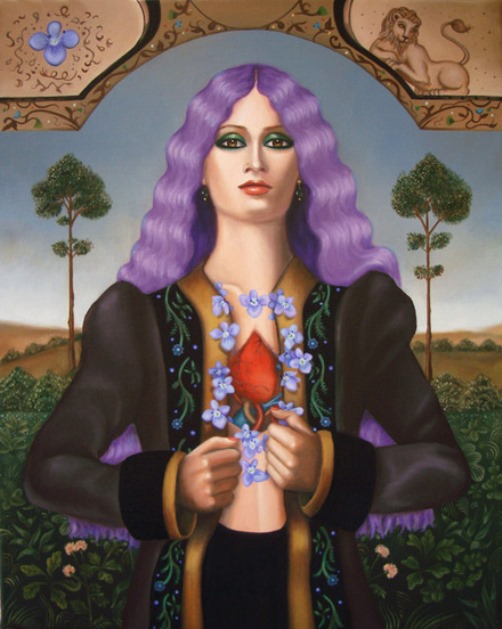 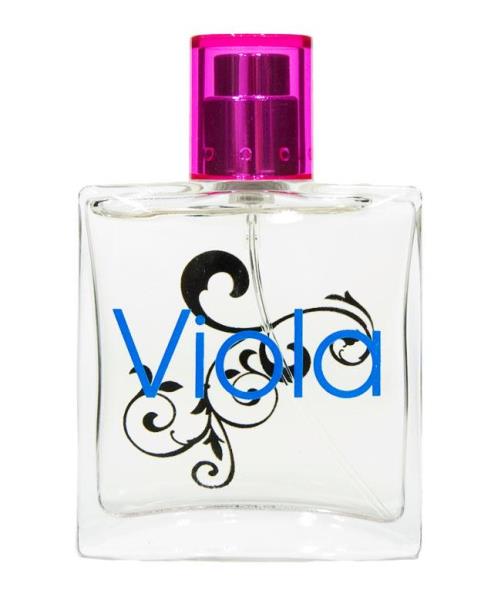 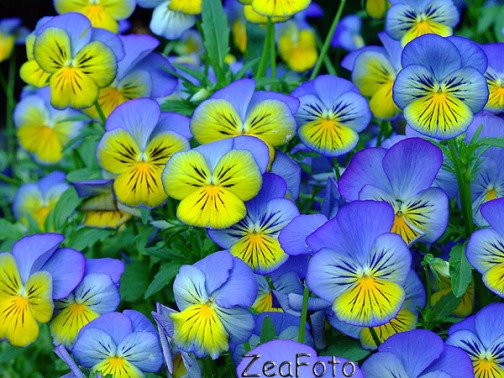 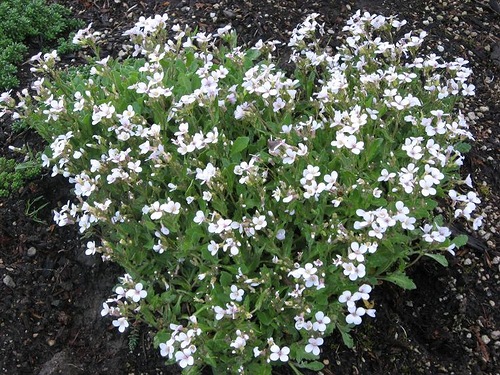 From Viola with love 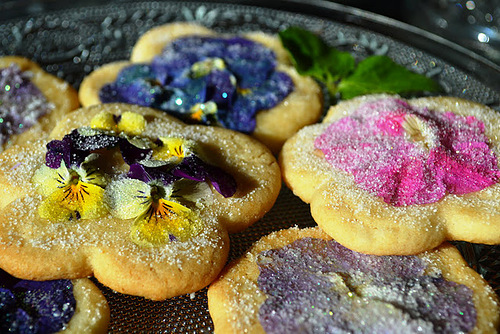 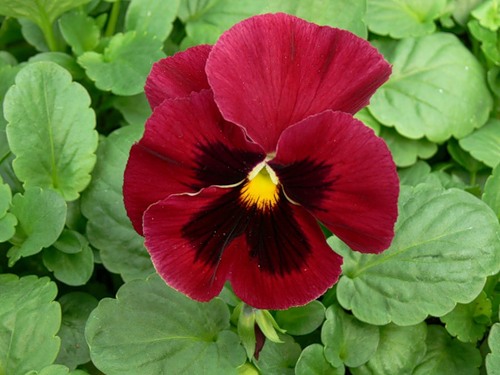 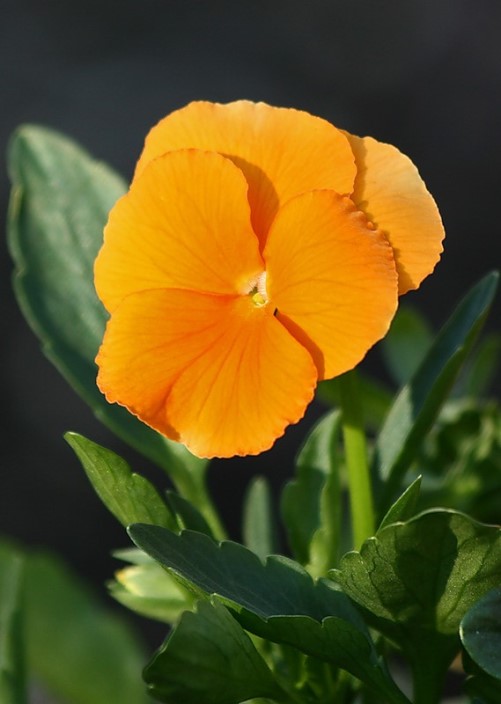 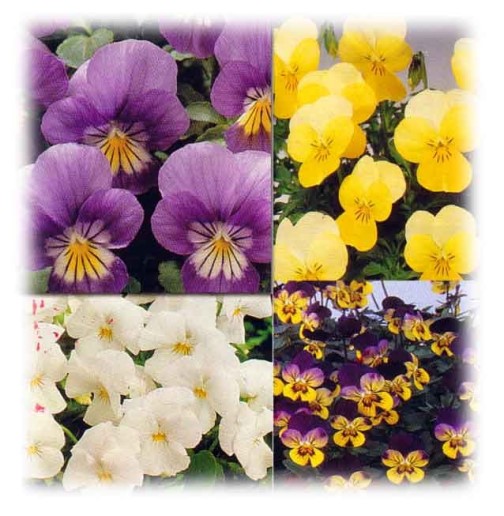 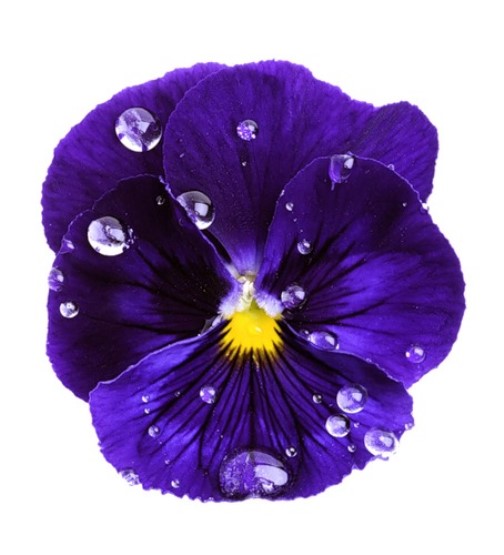 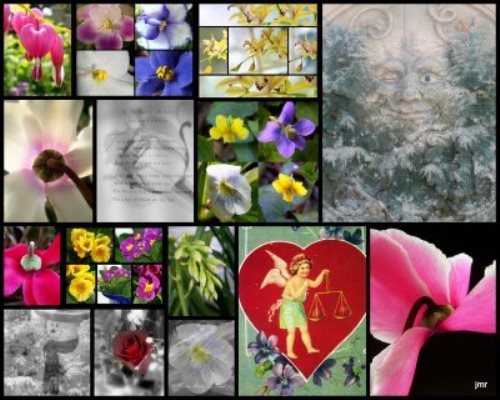 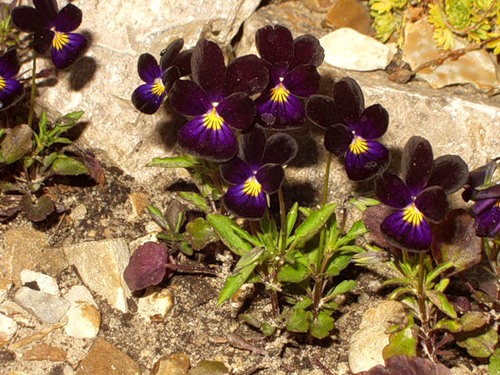 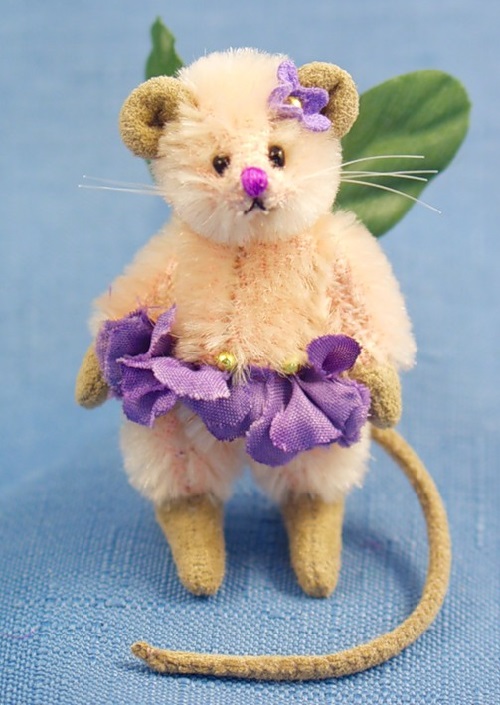