$ 3.25 ticket for the Beatles
Can you imagine people enjoying The Beatles for only three dollars and 25 cent ticket?? Good old times 🙂 The world will never be the same. The Beatles, (1956-70), English pop group, formed in Liverpool in the late fifties by John Lennon (1940 – 80), Paul McCartney (1942), and George Harrison (25 February 1943 – 29 November 2001). The Beatles were joined in 1962 by the drummer Ringo Starr (Richard Starkey) (b. 1940). In the same year they achieved national then international popularity under the management of Brian Epstein (T935 67). Their songs, mostly by Lennon and McCartney, initially blending *rhythm and blues and *rock and roll, became increasingly sophisticated, and their novel use of electronic, studio-produced sound was highly influential in the mid- and late sixties. 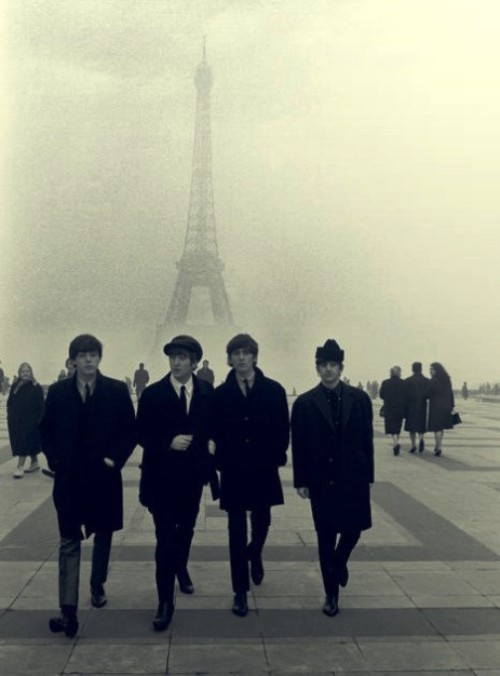 Emerging out of the Liverpool, England, rock scene of the 1950s, the Beatles became the most successful and best known band of the twentieth century. In 1956, a Liverpool local named John Lennon formed the Quarrymen. At one of their first performances, John met another guitarist, Paul McCartney. The two hit it off immediately: Paul was impressed by John’s energetic performance, and John was impressed that Paul knew how to tune a guitar, knew more than three chords, and could memorize lyrics. John and Paul developed a close friendship based on their enthusiasm for rock’n’roll, their ambition to go ‘‘to the toppermost of the poppermost,’’ and a creative rivalry which drove them to constant improvement and experimentation.

The pair soon recruited Paul’s friend George Harrison to play lead guitar and nabbed a friend of John’s, Stu Sutcliffe, to play the bass (though he did not know how). The Quarrymen, eventually renamed the Beatles, developed a local reputation for their rousing, exuberant performances and the appeal of their vocals. John and Paul were both excellent singers; Paul had a phenomenal range and versatility, while John had an uncanny ability to convey emotion through his voice. The sweetness and clarity of Paul’s voice was ideal for tender love songs, while John specialized in larynx-wrenching rockers like ‘‘Twist and Shout.’’ Their voices complemented each other perfectly, both in unison and in harmony, and each enriched his own style by imitating the other. The inexplicable alchemy of their voices is one of the most appealing features of the Beatles’ music. 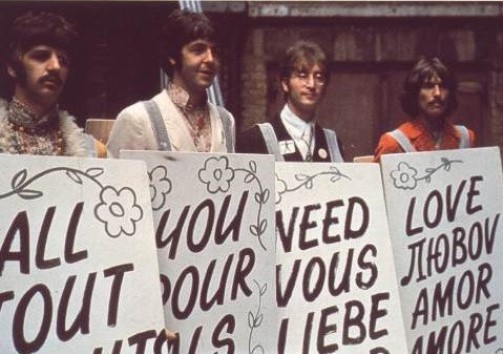 The word “Love” in different languages 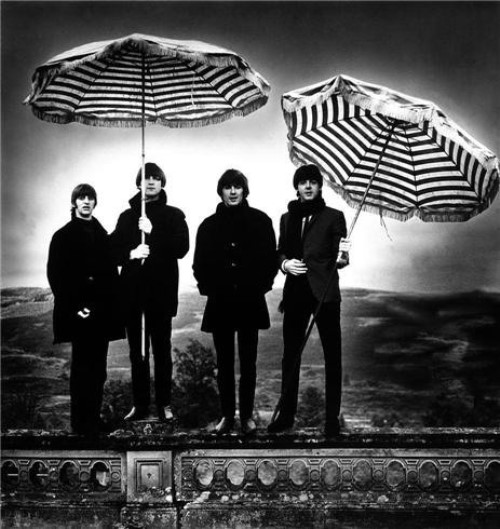 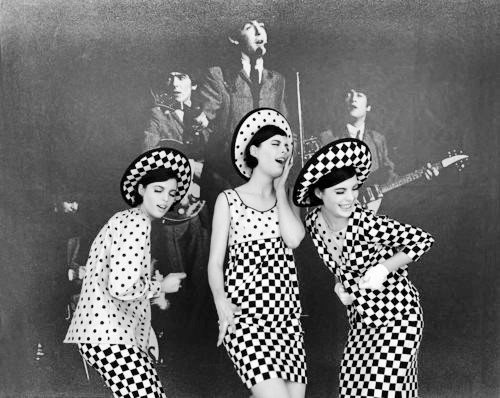 Iconic picture of the Beatles, animated 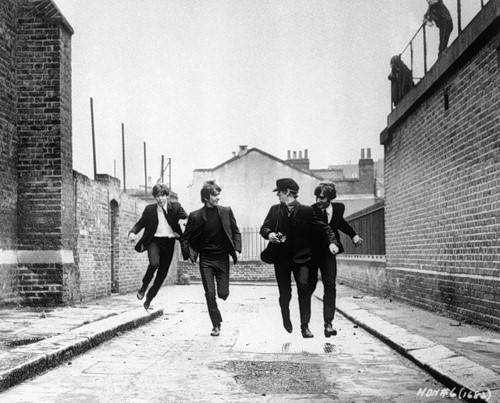 In Scene from A Hard Day’s Night 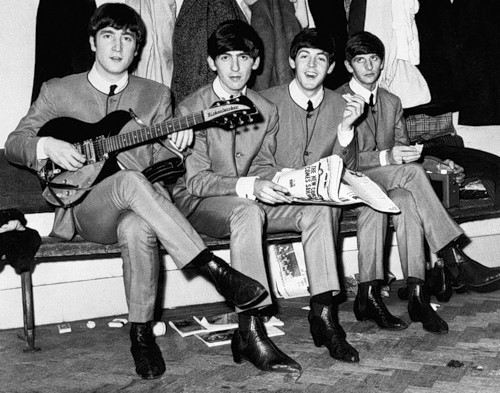 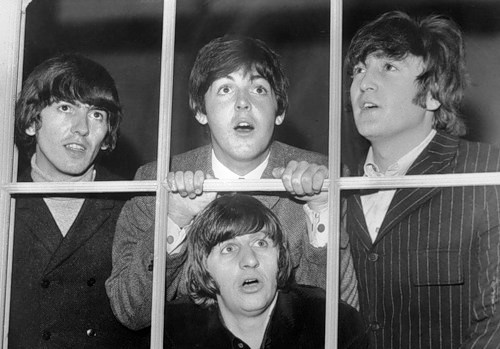 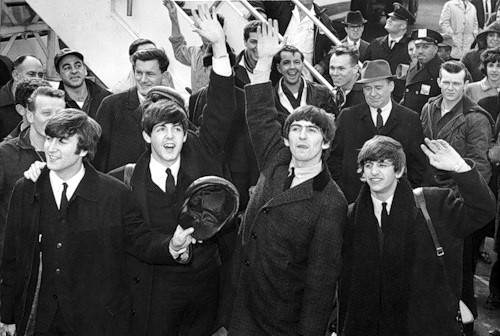 1964-Kennedy Airport, New York, New York- The Beatles wave to the thousands of screaming teenagers after their arrival at JFK Airport 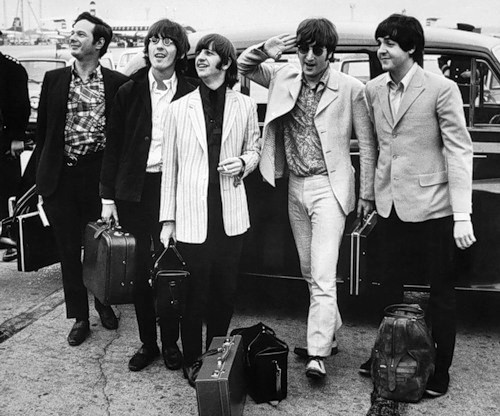 A portrait of The Beatles with their manager, Brian Epstein, arriving in London where they are welcomed by a crowd of two hundred fans 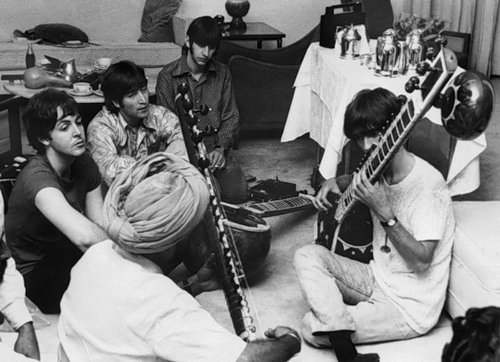 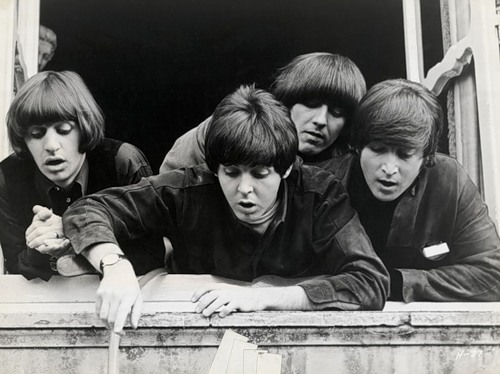 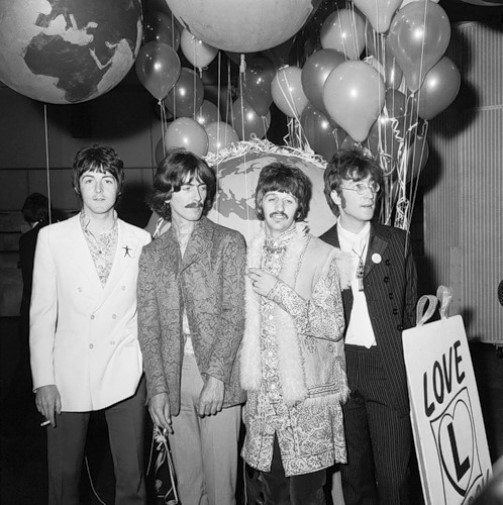 Together again to mark the release of their latest LP, the Beatles strike a familiar pose but in strange garb may 29th. (L to R) Paul McCartney, who shaved off his mustache last week; Ringo Starr in printed tie; John Lennon 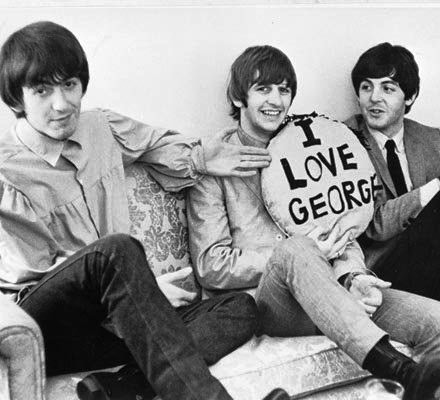