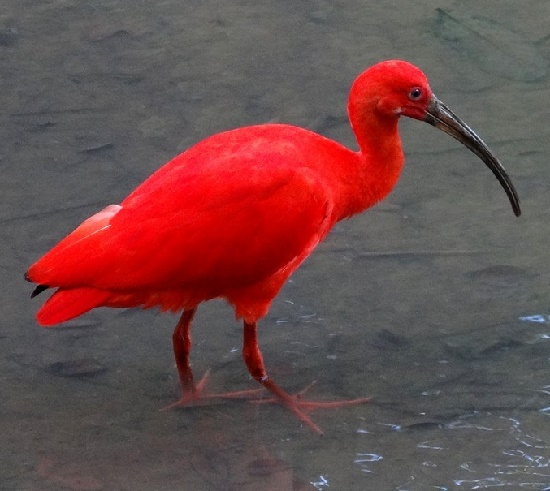 A typical habitat of Scarlet Ibis is marshy areas and rainy tropical forests of South America, as well as the Caribbean islands. Red or scarlet ibis is a medium-sized bird, most known for its bright color of plumage. Also, it is one of the 2 national birds of the Republic of Trinidad and Tabago.
Traditionally, Red color symbolizes much from love and blood to boldness and sacrifice. Also, red color plays an important role in nature. In particular, such color among animals and plants usually warns others about the danger and calls for the outsiders to stay at a distance. However, people on the contrary most often find plants and animals of red color extremely attractive and try to decorate their homes with it. By the way, red, or “krasny” in Slavic cultures means beautiful. 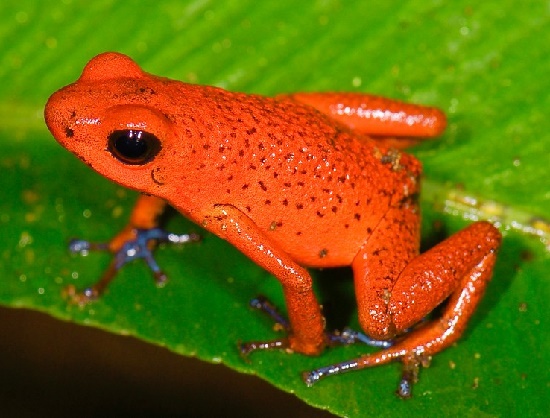 Originally from Central America from the lands of Nicaragua to Costa Rica and Panama, Strawberry poisonous frog is a small animal of very bright color. This species usually lives in humid lowlands and foothill forests, but sometimes its large colonies can be found in such troubled places as artificial plantations. 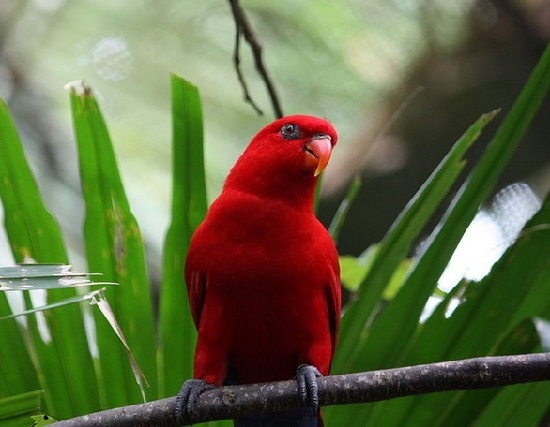 Red lory. This parrot is common in Indonesia, New Guinea, Australia and Oceania, considered the second most popular among the parrots and right after the rainbow loriket. Kept in captivity as pets, this is a very intelligent parrot with a playful character, often described as a bright, theatrical and pugnacious bird. 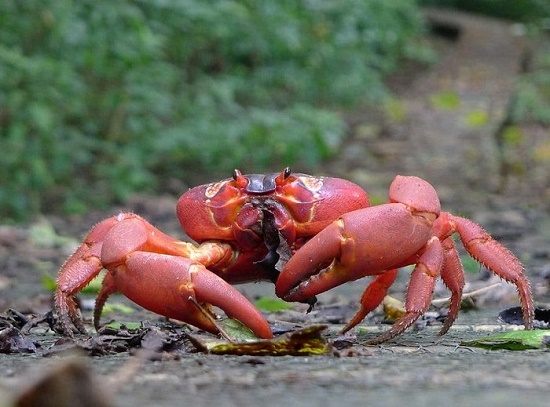 The Christmas Island red crab is one of the most common species of crustaceans in the Indian Ocean, on Christmas Island and on the Cocos Islands. These bright crabs are most famous for their annual mass migration during the laying of eggs. 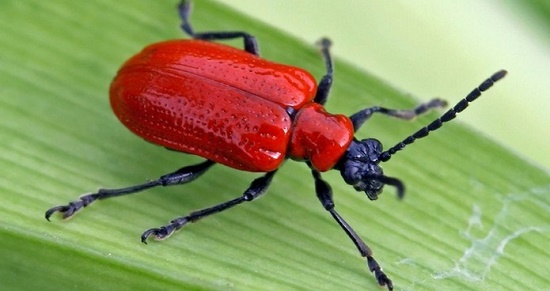 Scarlet lily beetle. A representative of a family of leaf beetles. Based on the name, it is not difficult to guess what it eats. Also this insect loves to chew stems, buds and flowers of lilies, and sometimes even butterflies and other beetles from their own family. This red beetle may look very nice, but in fact in agriculture it is a pest, most common in countries with a temperate climate. 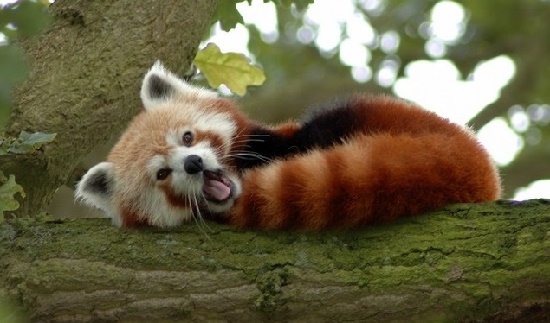 Red panda is a mammal of small size, living mainly in the eastern Himalayas and in the south-west of China. These animals are slightly larger than domestic cats, and live on trees, eating mostly bamboo. Sometimes red pandas supplement their diet with eggs, birds and insects. This is a single beast, leading a nightlife from sunset to dawn. 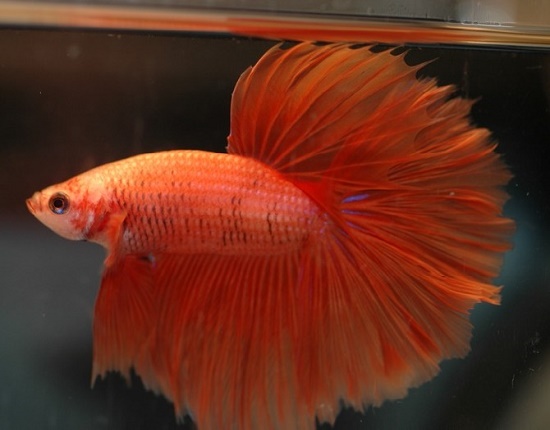 Siamese fighting fish, or Siamese warfish is a species of macro-labyrinthine fishes and a frequent inhabitant of domestic aquariums. Fighting fish reach approximately 6.5 cm in length. In nature, they are most often found in large bodies of water with standing water in areas of rice fields and river floodplains of Laos, Vietnam, Cambodia and Thailand. 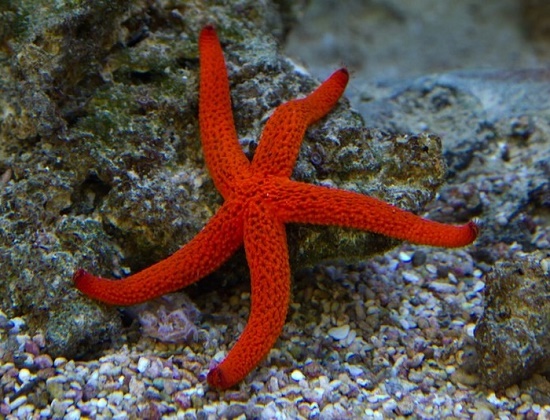 A species of sea star, Red starfish more often lives in the eastern waters of the Atlantic Ocean and in the Mediterranean Sea. It has long and slender arm-rays, and the diameter of the body reaches up to 20 cm, although in rare cases there are stars up to 30 cm in diameter. 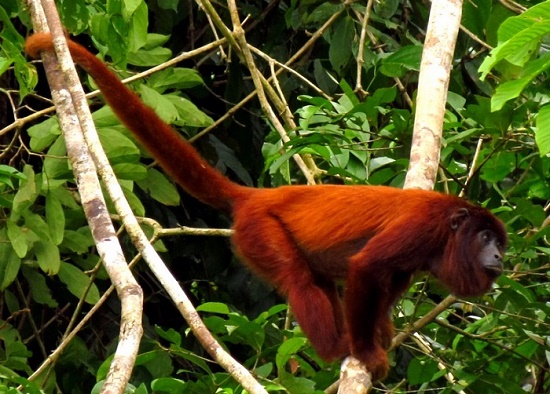 Venezuelan red howler is a broad-eared monkey that inhabits the forests of Brazil, Peru and North Bolivia. It is one of the few monkeys who build nests for their families. These primates are known for their loud howl, heard for 5 km in the deep forest thickets of South America. 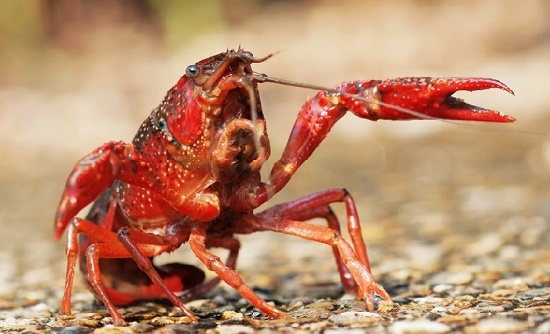 American marsh cancer, or Australian red claw crayfish once lived only in the south-west of the US. However, now this cancer inhabits other continents of the Earth. Often considered an aggressive animal, it is popular as an aquarium pet. Red or American marsh cancer prefers warm fresh waters of calm rivers, marshes, reservoirs, irrigation systems and rice fields. 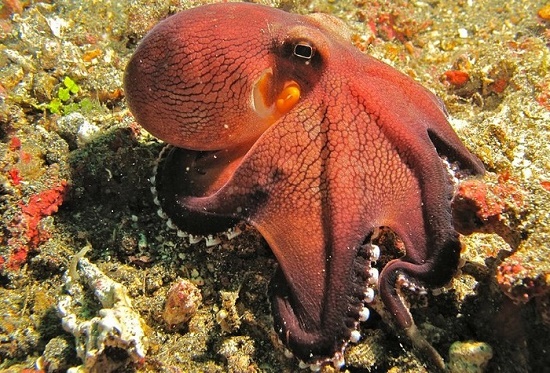 The coconut octopus lives in the tropical waters of the western Pacific region. Considered to be an average of the size for cephalopod mollusks, it hunts crabs, shrimps and mussels. The coconut octopus is especially famous for its unusual habits. In particular, the collection of coconut and sea shells for use as a shelter, as well as movement, often compared with bipedal walking. 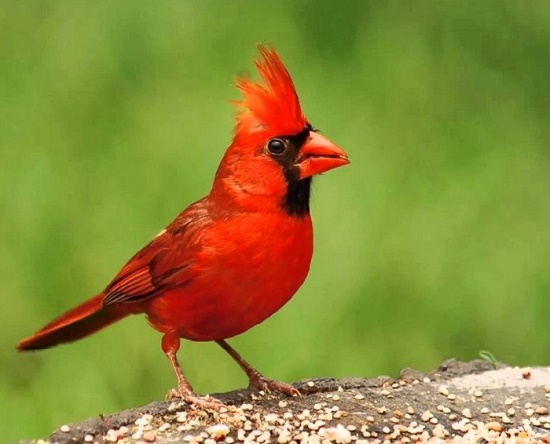 The Northern Cardinal is a North American bird of the family of cardinal groups of passerines. This red-headed bird lives in the forests, gardens, shrub steppes and marshes of Southern Canada, as well as in the east of the United States. Males are bright red, and females are dull red with olive tint. The bird received its name for the color of its plumage, similar in color to the traditional cloaks of Catholic cardinals. 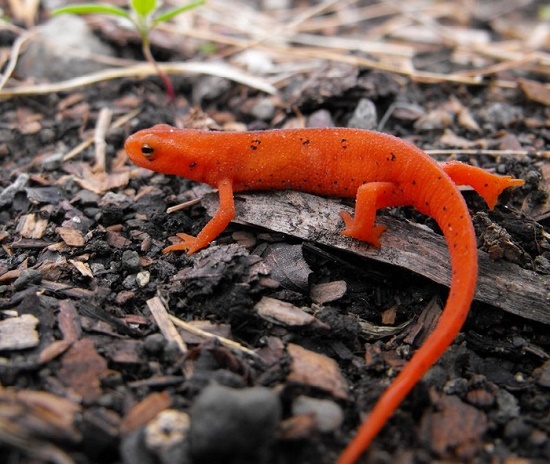 Eastern red spotted newt – widespread in the west of North America. It lives in small lakes, ponds and rivers near forests with high humidity. This small lizard only seems to be fragile and defenseless. In practice, if necessary, it releases a toxic substance tetrodotoxin, which protects it during a neighborhood with predatory fish and crabs. 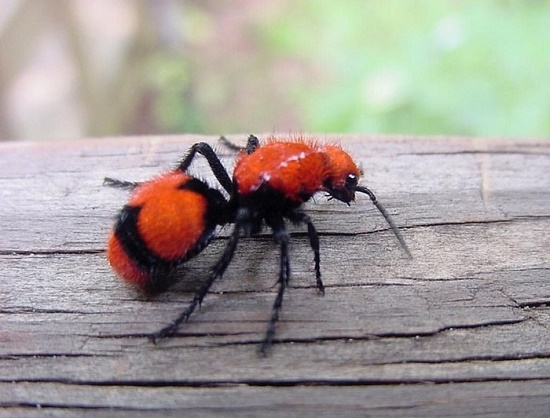 The red velvet ant, the wasp German or the cows’ killer are all those names for the same insect living in the east of the United States. This wasp is the largest of the velvety ants of America and reaches up to 2 cm in size. Although in reality the wasp German can not kill the cow, its females bite hard enough. 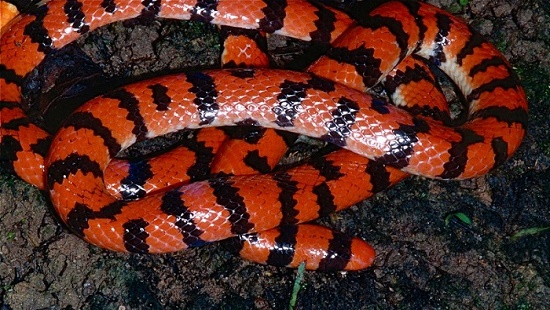 Known in the scientific world as Oxyrhopus Melanogenys, The Brazilian smooth snake this reptile lives in the northern part of South America. Its most noticeable feature is a bright red color, and its maximum dimensions are up to 68 cm in length. 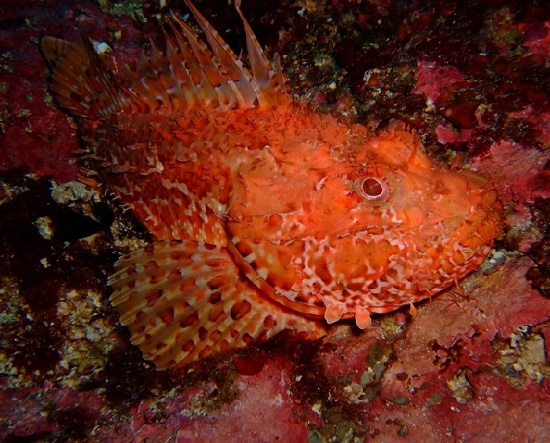 Marked by a rich red color of scales and fins, Fish red scorpion dwells in the Pacific Ocean near Japan. This fish grows to 76 cm in length. It has large wide pectoral fins, and there is no swim bladder, which only aggravates its eccentric appearance. 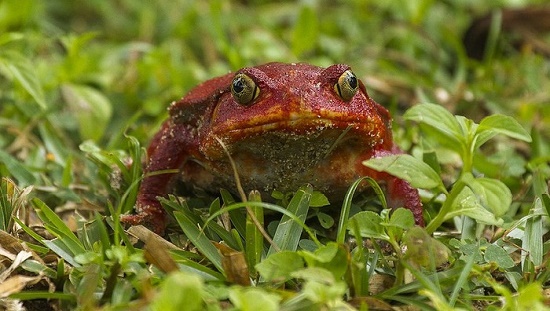 Common in Madagascar, a tomato frog – a large reddish individual that swells during a time of danger. When a predator tries to grab a frog, its skin emits a small amount of a thick substance that glues the eyes and mouth of the opponent. A hungry animal has to release the frog to see again. 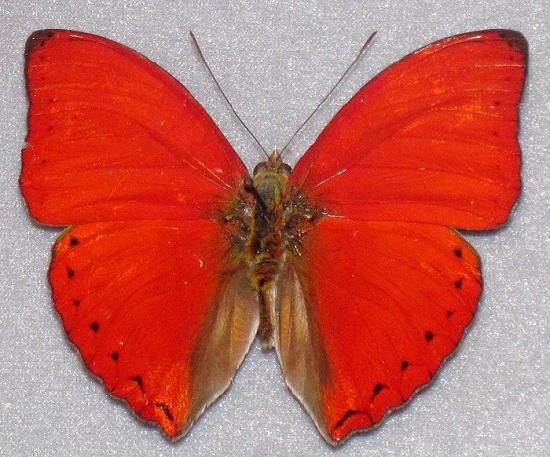 The blood-red glider is a medium-sized butterfly, and it belongs to the Nymphalides family living in Central America. The dorsal part of this amazing insect is blood-red, while the color of the ventral side varies from olive to grayish or brown. 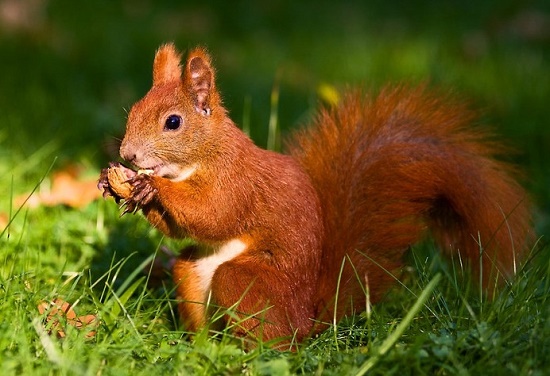 Red squirrel, also known under the name of the Eurasian red squirrel, lives in coniferous forests, and in broadleaf groves of temperate climatic zones of Europe and in Siberia. The wool of the squirrel changes its color depending on the season and habitat, but the red color, as a rule, is the most common. 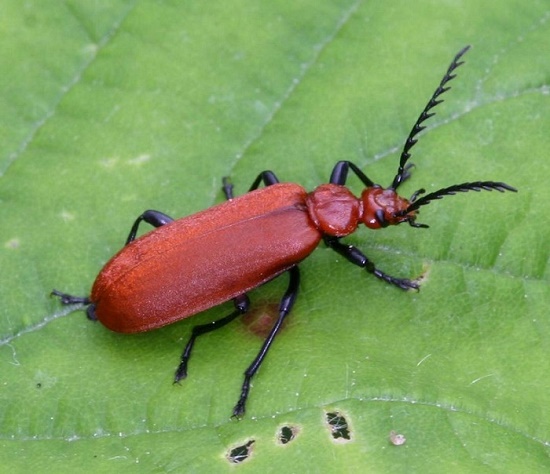 Beetle red cardinal is common for the UK, this beetle is medium-sized (about 2 cm in length). A bright insect loves forest edges, full of food in the form of small insects. The red color of the beetle discourages larger predators, for which bright color is a signal that potential prey can be poisonous. 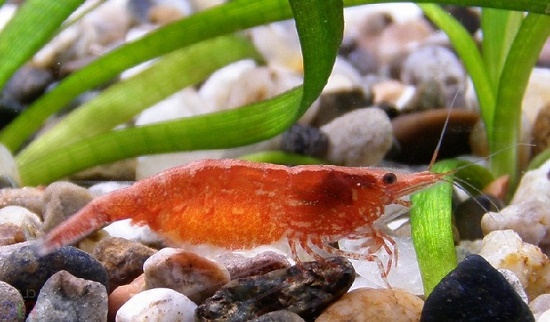 Cherry shrimp – a kind of freshwater shrimp from Taiwan has become a popular aquarium pet. The natural color of the ordinary shrimp is green-brown, but it is the red shrimp that is the most frequent inhabitant of artificial ornamental reservoirs because of its attractive appearance. Shrimp is omnivorous and in sizes reaches up to 4 cm. 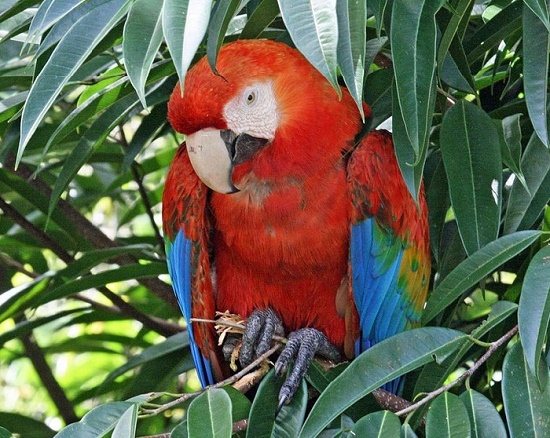 Scarlet macaw. This parrot lives in the humid rainforests of evergreen South America, and is a large bird with bright colored plumage. Scarlet macaw refers to the neotropical parrots, badly affected by humans and almost extinct due to uncontrolled fishing and trading. 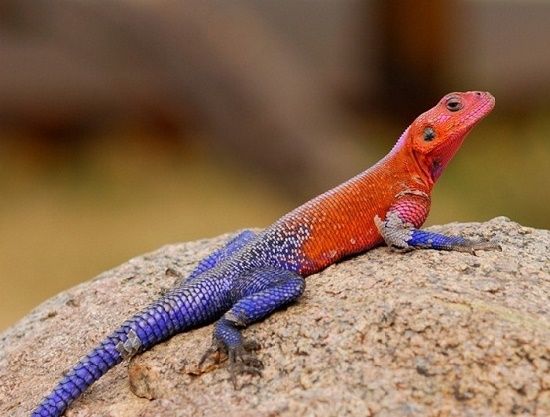 Flathead lizard Agama mwanzae, known also under the popular nickname “lizard-spiderman” for its red-blue color. This agama lives in Tanzania, Rwanda and Kenya. A bright lizard prefers to hide in semi-deserts and bask in sunlit rocks. 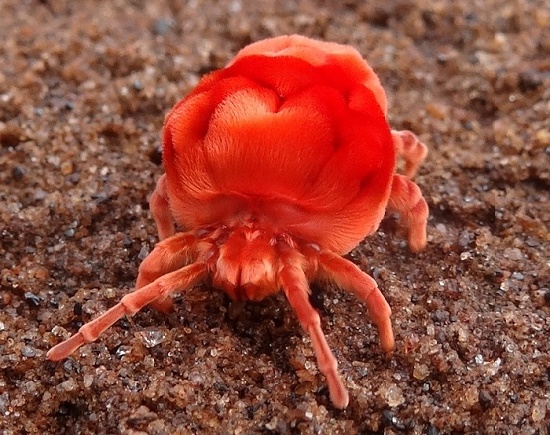 A red velvet tick, or a rain beetle is a spider-like insect, known for its vivid coloring and the habit of laying eggs right in the ground. Outwardly very similar to a spider, a red velvet tick in adulthood is an active predator, while being a young specimen it parasitizes other insects and even some arachnids. 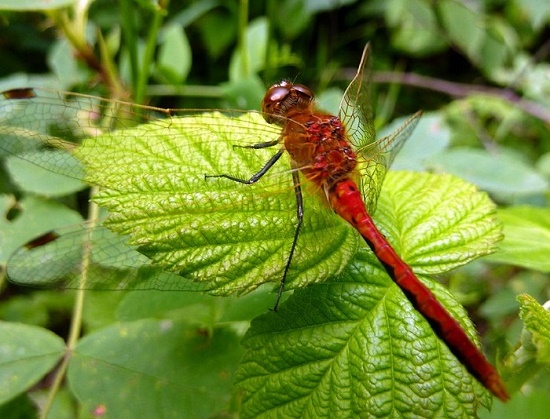 The red-veined dragonfly refers to the genus of stone-dragonfly of the family of these dragonflies. Found in central and southern Europe, on the Mediterranean islands, in Africa, in the Middle East and in the south-western part of Asia. This dragonfly prefers standing water, but without problems makes long flights, long being away from water. A red-veined dragonfly can sometimes travel even through whole seas. 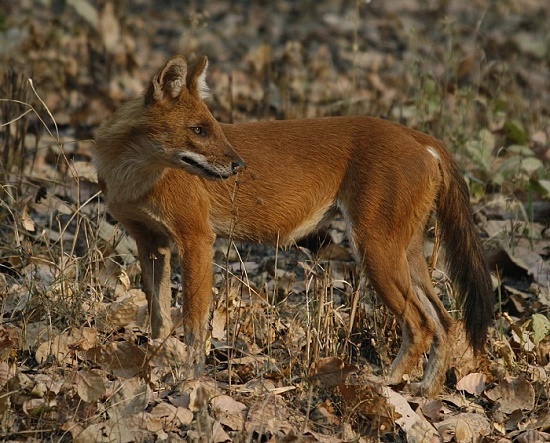 Indian wild dog, whistling dog, or red dog. The exterior is very peculiar – it combines the features of a gray wolf, jackal and fox. The red wolf has a dense, long reddish-red coat on the back and sides, the chest, stomach and the inside of the legs are cream-colored. The long fluffy tail is similar to the fox, it is slightly darker than the rest of the body, almost black at the end. On his head there is a dark pattern around the eyes and on the nose.