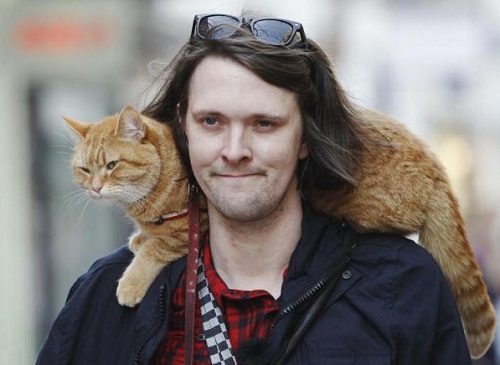 A cat and his owner James Bowen, London. Bob stray cat who saved a man

Bob stray cat who saved a man
In the middle of London’s street in Covent Garden sits a cat wearing a Union Jack neckerchief. Next to him, his owner James Bowen stands with his acoustic guitar. He stops playing and bends down to Bob. ‘Come on, Bob, high-five!’ he says. Bob twitches his whiskers, raises a paw, and taps James’s outstretched hand. The crowd coos. A smart-looking lady in a pink dress and jacket pops a £20 note in the cap at Bob’s feet. Bob is no ordinary cat, he is a star. He has his own Twitter account (with 12,000 followers), his own Facebook page, even his own fan group, the Street Cats, who send him photos, scrapbooks and presents. 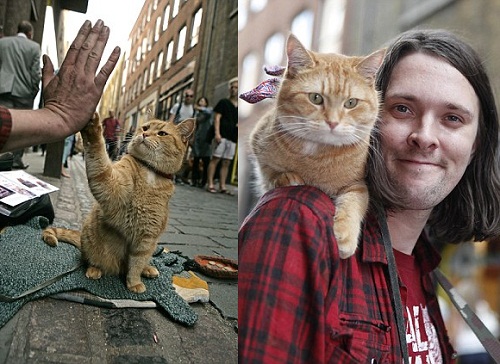 James Bowen and Bob the cat busking in Covent Garden

He also has his own bestseller and is in ‘talks’ with a Hollywood agent about taking his story to the big screen. Bob’s owner, James is leading the discussions, but he’s in no doubt that he owes it all to his cat. 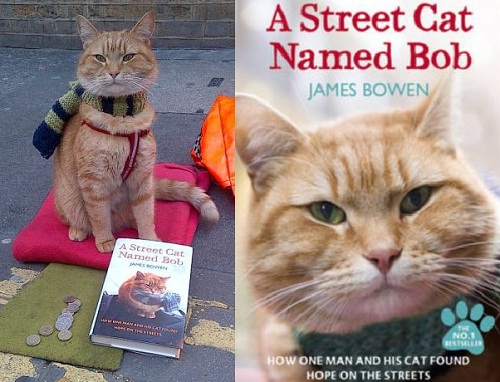 James’s book, A Street Cat Named Bob, a feelgood story that chronicles how the 33-year-old busker and one-time homeless heroin-addict turned his life around with the help of his cat, has sold more than 250,000 copies and been translated into 18 different languages. 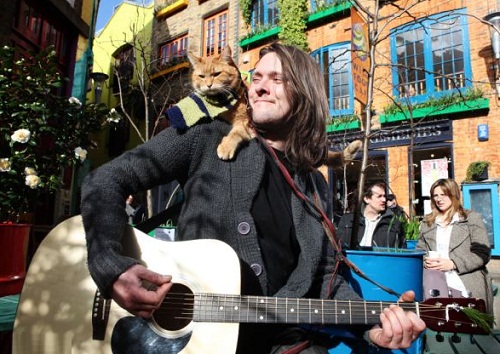 Traveling with on the shoulders of his owner stray cat named Bob. London

After Bob refused to leave Mr Bowen alone, he decided to take him busking and before long he was making almost three times his usual earnings as the pair attracted more and more fans. Mr Bowen, who was recovering from drug addiction, said Bob helped him turn his life around after he refused to leave him alone, even traveling on public transport before Mr Bowen decided to keep him 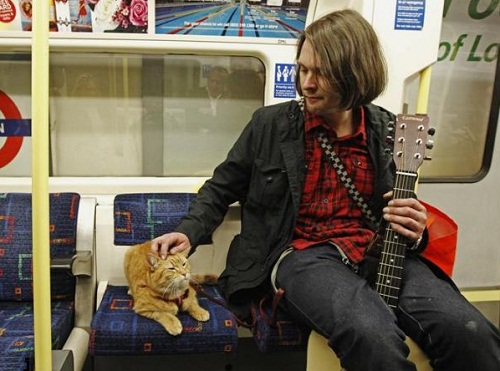 It all began five-and-a-half years ago, on a grey Thursday evening in March, when James found Bob, starving and wounded, on the stairwell of his block of council flats in Tottenham, North London. After three days, James cleaned his wounds and took him to the RSPCA for a course of antibiotics, which cost £28. At the time, James was busking and earning just £25 a day. ‘It was pretty much the last money I had, but I didn’t feel it was too much to help something in need. I’ve always loved cats,’ says James. 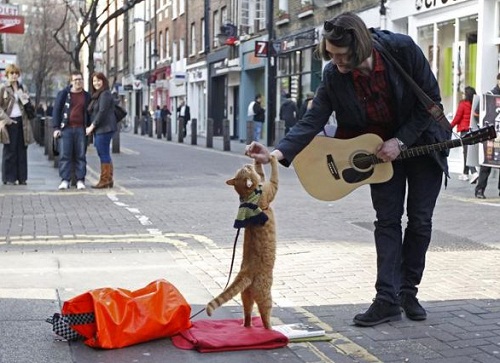 Performing in the street Bob and James Bowen, London

‘People love seeing him’: The pair turn heads on the street as Bob happily sits on Mr Bowen’s shoulders. ‘I had to change schools constantly, which meant I was never really stable. I was bullied a lot, too. I felt no one really understood me.’ 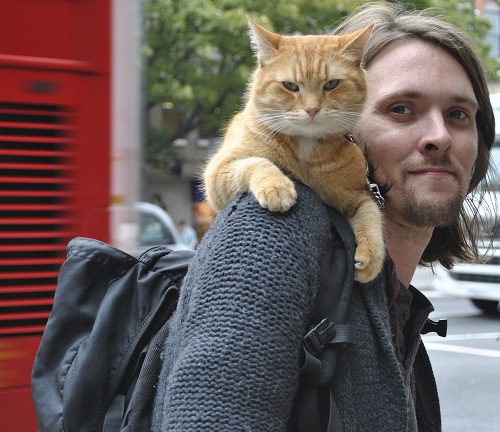 The pair make quite a sight — the 6ft 3in James walking down the road with a ginger moggy draped around his neck. While James sings, Bob curls up on a blanket. 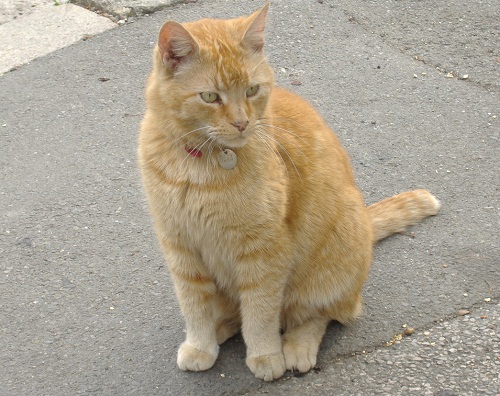 Soon passers-by were bringing Bob titbits of food, toys, even clothes. ‘Someone gave him a purple scarf. Then everyone wanted to give him one. He must have more than 20 specially knitted scarves, a couple of jumpers, ten blankets — mouse shaped-ones, cat-shaped ones. It’s amazing.’ 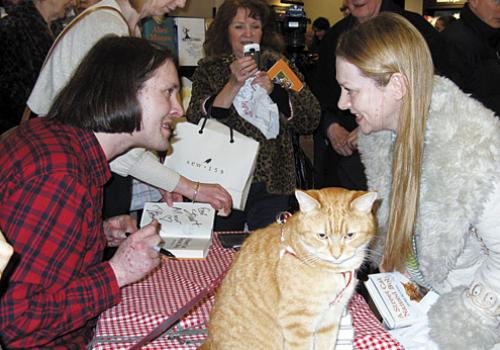 Today, James says he’s drug-free and insists he won’t return to his former life. In a Sunday newspaper this week, he was clear: ‘I’ll never go back to drugs. I’ve learned too much and grown up.’ For this, he thanks Bob: ‘It’s all down to him. For the first time, I felt like I had family. It gave me the determination to make my life more comfortable, to make his life better, too.’