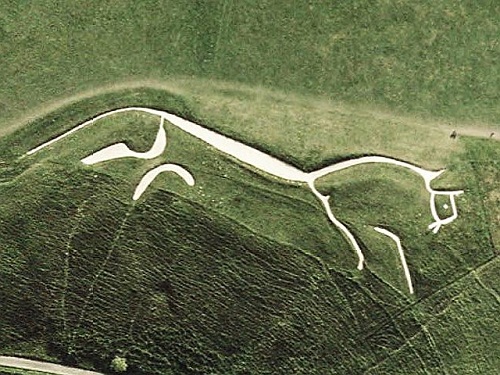 The oldest carved figure – the Uffington White Horse, which dates back to Iron Age. Chalk figures in England

Chalk figures in England
Hill figures of England have always got my admiration with this country, history and people who have created timeless monuments of art and culture. The creation of hill figures has been known in England since prehistory, it is a form of art, called geoglyph. The earth carving depicts human and animals, sometimes abstract symbols and modern carving – advertising. The figures are usually created by cutting off a layer of a chalk hill. The opened white chalk spot perfectly contrasts with the green hill grass, and the image is clearly visible for a distance. Ancient hill figures are a phenomenon in England, and the oldest carved figure is the Uffington White Horse, which dates back to Iron Age. Most of the figures are ancient pieces of art, but many are relatively new. For example, Devizes in Wiltshire created a large white horse for the 2000 Millennium celebrations. 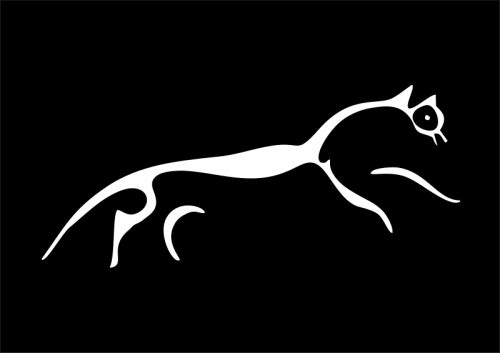 Uffington White Horse, sketched by William Plenderleath in The White Horses of the West of England (1892)

The Uffington Horse was politically significant, as it dominated the valley below. 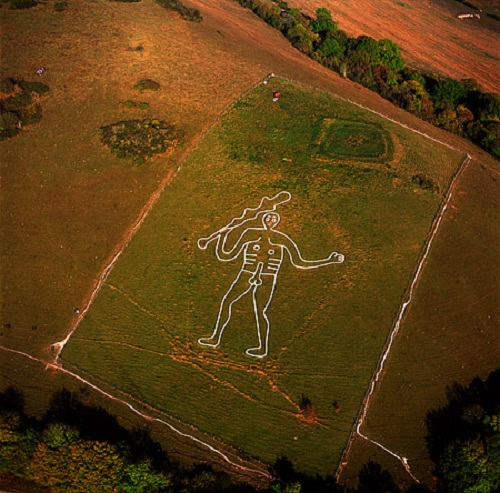 The Cerne Abbas Giant is a hill figure near the village of Cerne Abbas in Dorset, England

Cerne Abbas Giant chalk figure below the rectangular “Trendle” earthworks. The Cerne Abbas Giant is a hill figure near the village of Cerne Abbas in Dorset, England. Made by a turf-cut outline filled with chalk, depicts a large, naked man, typically described as a giant, wielding a club. The figure is listed as a scheduled monument in the United Kingdom, the earliest mention of it dates to the late 17th century.

The Long Man of Wilmington is situated on the South Downs, Sussex

The Long Man of Wilmington is situated on the South Downs, Sussex, was formerly often known as the Green Man. It is 69.2 meters tall, holds two “staves”. Formerly thought to originate in the Iron Age or even the neolithic period, more recent archaeological work has shown that the figure may have been cut in the Early Modern era – the 16th or 17th century AD. 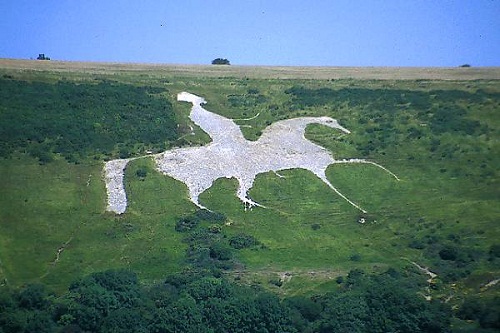 The Osmington White Horse is a seen for miles around hill figure sculpted in 1808 into the limestone Osmington hill. The figure of King George III, who regularly visited Weymouth, riding on his horse. It is 85 m long and 98 meters high. In August 2011 pranksters added a ‘horn’ made from plastic sheeting to make the horse resemble a Unicorn. In 2012, the horse was cleaned up and slightly recut to make it look like it originally did upon its cutting in 1808. The volunteers have spent the last two years carrying out the repairs. 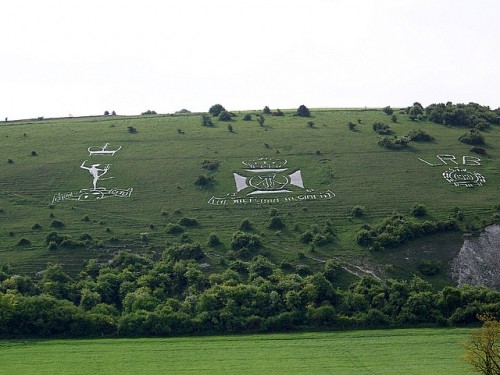 The Fovant Badges are a set of regimental badges cut into a chalk hill, in Wiltshire, Chalk figures in England

The Fovant Badges are a set of regimental badges cut into a chalk hill, in Wiltshire, England. They were created by soldiers garrisoned nearby, and waiting to go to France, during the First World War, the first in 1916. Eight of the original twenty remain, and are scheduled ancient monuments and recognized by the Imperial War Museum as war memorials. Further badges have been added more recently.

Litlington White Horse replaced an earlier one known to have been present from many years before. It is one of the lesser-known of the nine white horse figures located outside Wiltshire. 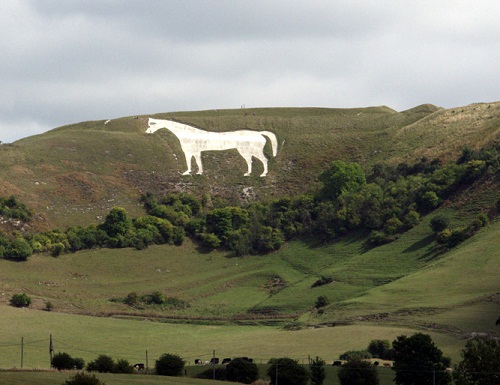 The oldest of several white horses carved in Wiltshire Westbury White Horse, or Bratton White Horse is located in Salisbury Plain, 2.5 km east of Westbury. It was restored in 1778, an action which may have obliterated a previous horse which had occupied the same slope. A contemporary engraving of the 1760s appears to show a horse facing in the opposite direction, and also rather smaller than the present figure. However, there is at present no documentary or other evidence for the existence of a chalk horse at Westbury before the year 1742. 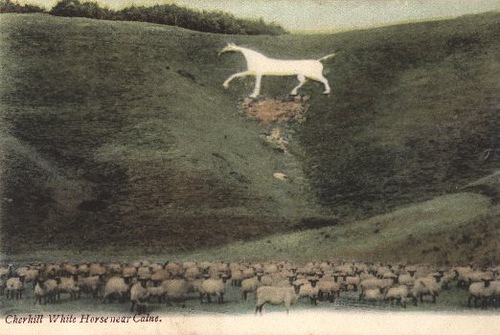 The Cherhill White Horse is located 3.5 miles east of Calne in Wiltshire, England

The Cherhill White Horse is located 3.5 miles east of Calne in Wiltshire, England. Dating from the late 18th century, it is the third oldest of several such white horses in Great Britain, with only the Uffington White Horse and the Westbury White Horse are older. 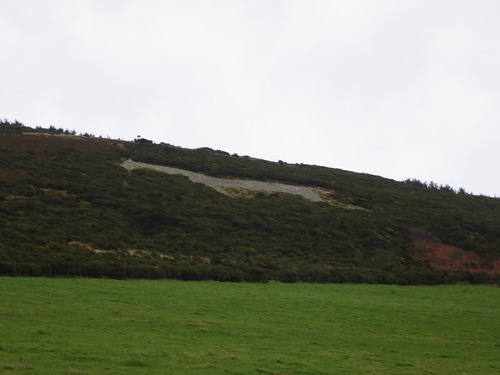 The Mormond White Horse is located in county Aberdeenshire on the side of the white quartz hill. The date of construction is around the 1790s

The Mormond White Horse is located in county Aberdeenshire on the side of the white quartz hill. The date of construction is around the 1790s. There is a story of its origin. The horse was cut by Captain Fraser, whose horse was shot from under him in a Dutch battle in 1794. A sergeant Henderson, who offered him his own horse, was shot dead in the process. Upon his return Captain Fraser cut the horse as a memorial to the sergeant. 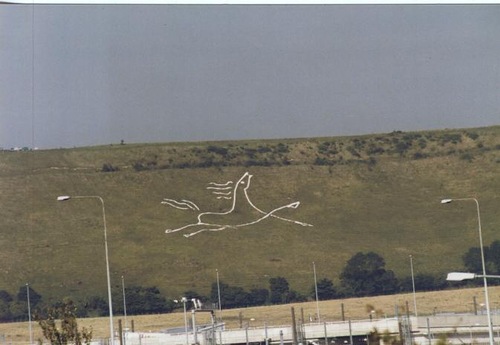 The Folkestone White Horse was carved into Cheriton Hill, Folkestone, Kent, South East England. It overlooks the English terminal of the Channel Tunnel and was completed in June 2003

P.S. My English friend told me, that broken glass was added to the eye of one of the carved horses, so in a sunny day that horse was seen from a distance with its sparkling with all colors of rainbow eye, breathtaking view.