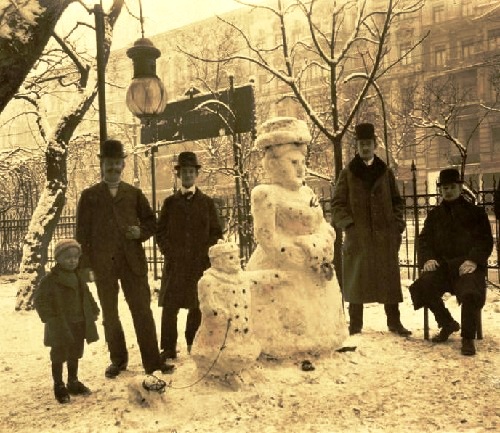 Dutch Queen Wilhelmina and Princess Juliana as snowmen in the Netherlands (1913). Creation of Snowman

Creation of Snowman
In Russia, there is a good proverb “Prepare the sled in summer, and cart in winter”. Indeed, when, if not in summer to write about the most cheerful winter ritual – making snowman. Meanwhile, the tradition is very ancient. Thus, the first written mention of a snowman dates back to the 13th century. Interestingly, believe it or not, but first snowman was an evil character! That’s why many wanted him to melt. In fact, snowman represented frost, blizzard, short daylight hours, cold and other winter woes! Indeed, Snowman was the spirit of winter since ancient pagan times. Nevertheless, surrounded by a lot of prejudice, Snowman has survived. And in some areas of tsarists Russia, instead of January people used the word “snowman”! In addition, some sources also claim that the Slavs believed in living in the winter sky some nymphs who commanded snow, fog and snowstorm. And they sculpted snowmen to glorify and to honor them.

Meanwhile, people believed that if to blind a snowman in a full moon, it will bring misery and nightmare. And to meet the snow figures in the evening was a bad sign. Therefore, in the dark period of the day people tried to pass by without looking at it.

Of course, there is nothing surprising in this, because in the Middle Ages snowmen personified powerful supernatural forces. For example, considered dangerous to sculpt snowmen during a full moon. And if a person has violated this prohibition, cobbled together at the wrong time snowman will come in nightmares every night and bring problems. In Norway, strictly forbade after sunset to look at a snowman through the curtains, and to prevent that, they lowered curtains.

Then, with the advent of Christianity, snowman became kinder, cheered and even turned into an angel, bringing desires to God. And the snow is a gift from heaven. Noteworthy, February 28 it is necessary to make a snowman and whisper to him your desire, and be sure – it will come true!

Meanwhile, in European tradition, snowman was the invention of knight Giovanni Bernardoni in the XII century aka St. Francis of Assisi. According to the Life of St. Francis, fighting the demons tempting him, he began making snowmen and called them his wife and children. In modeling a snowman guessed prototype of creation of a man, only the act of creation belongs to the man.

In Russia snowmen were the embodiment of spirits of winter, to them, as well as to frost, pleaded for help/mercy and decreasing the duration of colds. Perhaps that is why in the “hands” of snowman is always a broom – so that he could safely fly up to the sky, when he wants. In Russia once believed, if the air is populated by celestial maidens, ruling fogs, clouds, snow, the pagans in their honor organized ceremonial rituals, and molded their images.

In Russia, Ukraine and Belarus a snowman Day is considered to be February 28

Sometimes the wildest version of the origin of a snowman takes place. Its fans believe that in ancient times crowds of yeti roamed throughout Russia, snow people even stole small children. To get rid of these maniacs, our ancestors sculptured snowmen. For summer time they designed scarecrow to ward off these chasing yetis. 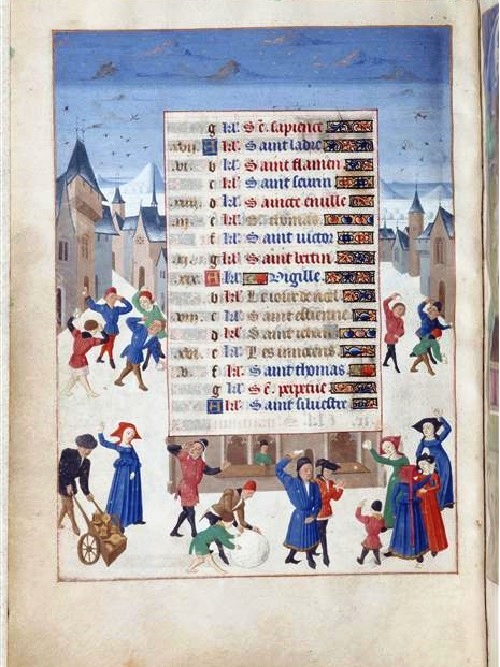 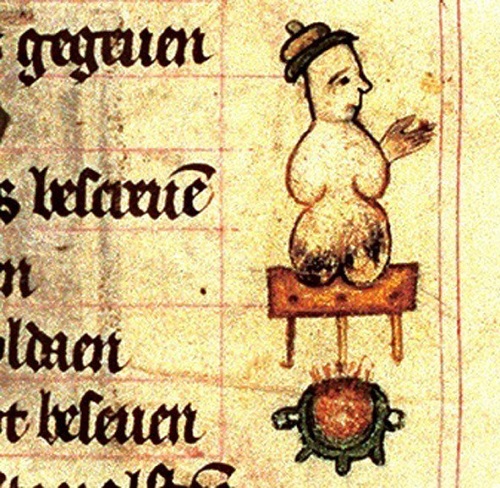 The tale of Andersen ‘Snowman’, engraving 1861

In 1957, for the first time Snowman becomes the protagonist of a work of art – the Soviet animated film ‘Snowman mailer’ 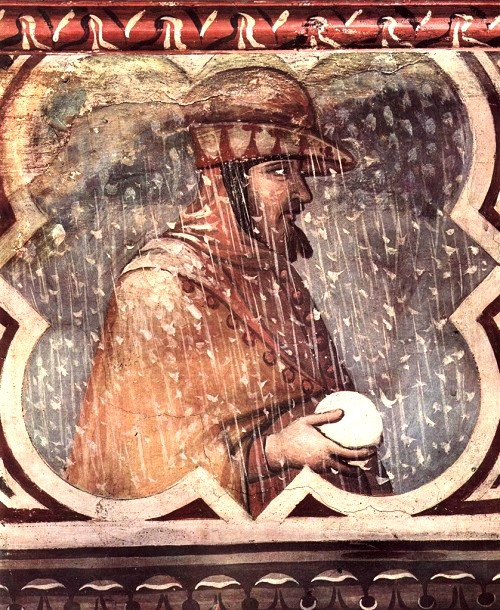 Man sculpts a snowman. Detail of the fresco of the Palazzo Publico in Siena, Italy. 1390s 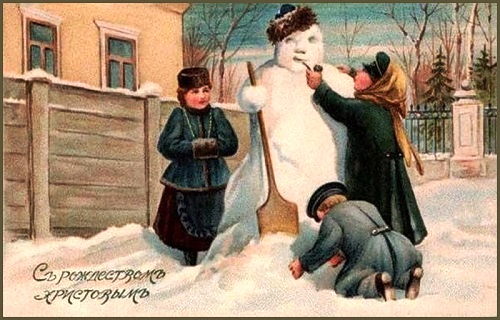 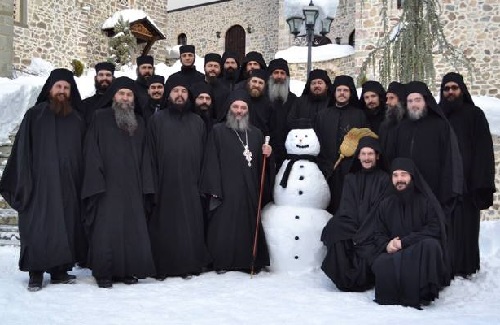 The monks from the monastery of St. John the Baptist, which is located in the Macedonian town of Mavrovo. January 2015 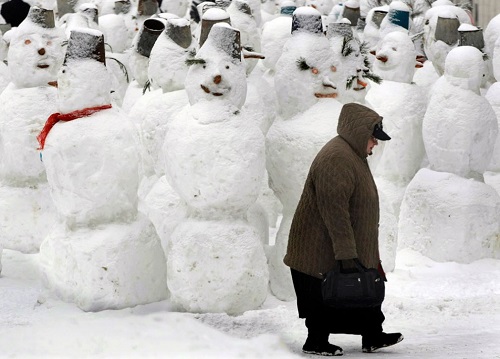 February 2, 2015. A woman walks past a hundred of snowmen in the center of Moscow 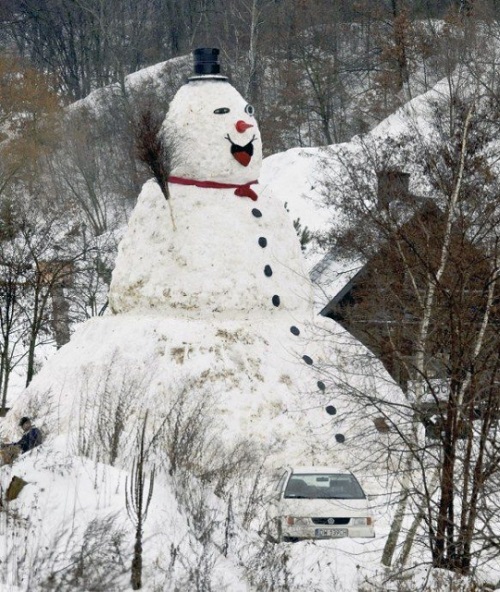 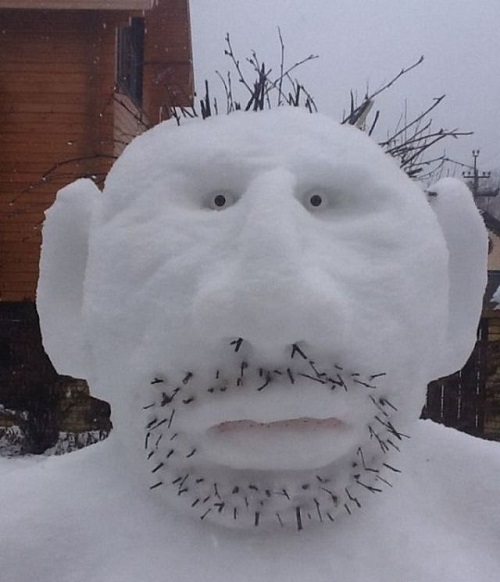