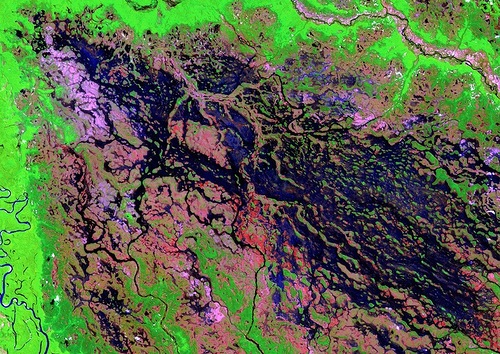 In the above photo – A marsh-like area borders the Demini River in northwestern Brazil. The Demini eventually joins the Amazon River. Image taken on March 15, 2000. Earth Art Photo: USGS/NASA. These images are actual pictures of the Earth, created by printing visible and infrared data in colors visible to the human eye.

This stretch of Iceland’s northern coast resembles a tiger’s head complete with stripes of orange, black, and white. The tiger’s mouth is the great Eyjafjorour, a deep fjord that juts into the mainland between steep mountains. The name means “island fjord,” derived from the tiny, tear-shaped Hrisey Island near its mouth. The ice-free port city of Akureyri lies near the fjord’s narrow tip, and is Iceland’s second largest population center after the capital, Reykjavik. Image taken by Landsat 7 on Oct. 21, 1999. Earth Art Photo: USGS/NASA. 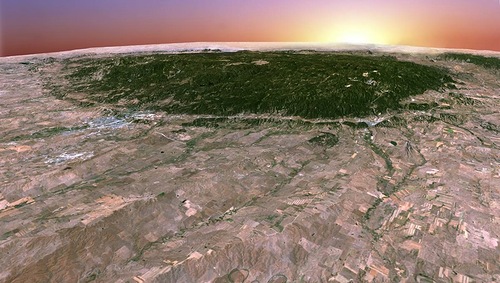 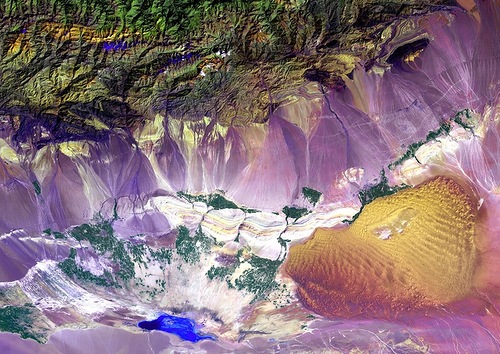 Bogda Mountains. The Turpan Depression, nestled at the foot of China’s Bogda Mountains, is a strange mix of salt lakes and sand dunes, and is one of the few places in the world that lies below sea level. Image taken by Landsat 7 on Sep. 1, 1999. 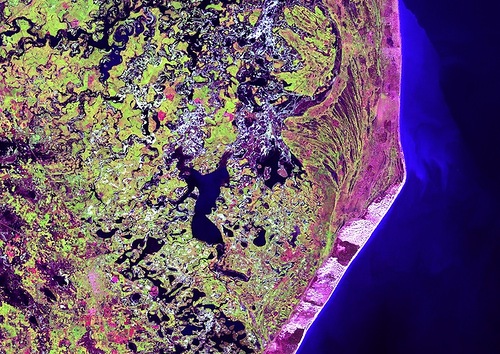 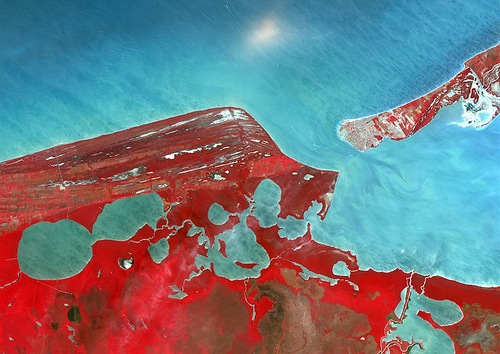 Campeche. Named after the ancient Mayan Province of Kimpech, the state of Campeche comprises much of the western half of Mexico’s Yucatan Peninsula. Rivers in southern Campeche drain into the immense Terminos Lagoon, the entrance to which is protected by a long barrier island, Isla Del Carmen. Image taken by ASTER on May. 2, 2002. 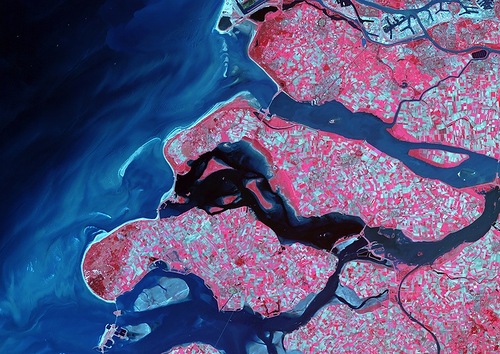 Delta Region, Netherlands. Along the southern coast of the Netherlands, sediment-laden rivers have created a massive delta of islands and waterways in the gaps between coastal dunes. After unusually severe spring tides devastated this region in 1953, the Dutch built an elaborate system of dikes, canals, dams, bridges, and locks to hold back the North sea. Image taken by ASTER on Sep. 24, 2002. 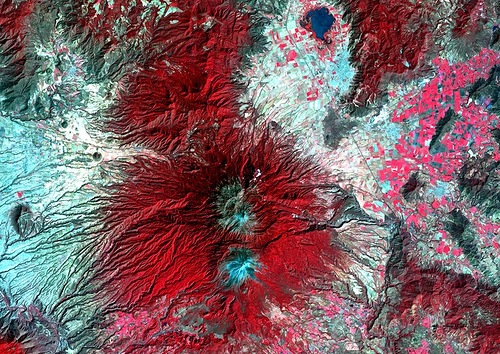 Snow-capped Colima Volcano, the most active volcano in Mexico, rises abruptly from the surrounding landscape in the state of Jalisco. Colima is actually a melding of two volcanoes, the older Nevado de Colima to the north and the younger, historically more active Volcan de Colima to the south. Legend has it that gods sit atop the volcano on thrones of fire and ice. Image taken by ASTER on Feb. 6, 2003. 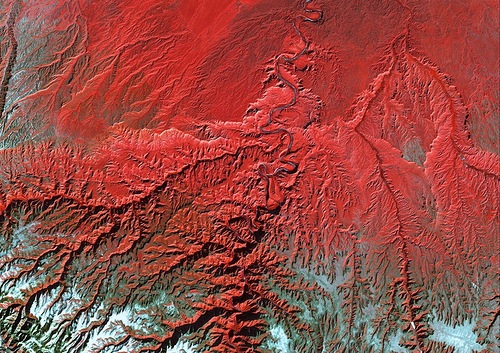 Utah’s Green River flows south across the Tavaputs Plateau (top) before entering Desolation Canyon (center). The Canyon slices through the Roan and book Cliffs – two long, staircase-like escarpments. Nearly as deep as the Grand Canyon, Desolation Canyon is one of the largest unprotected wilderness areas in the American West. Image taken by Landsat 7 on Dec. 31, 2000. 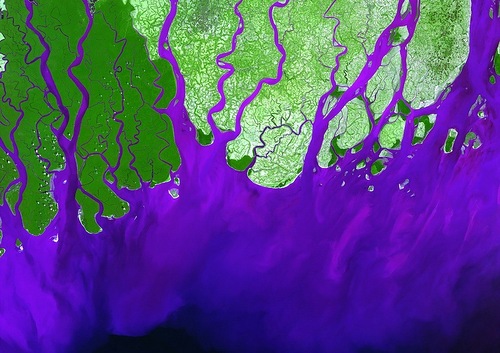 The Ganges River forms an extensive delta where it empties into the Bay of Bengal. The delta is largely covered with a swamp forest known as the Sunderbans, which is home to the Royal Bengal Tiger. Image taken on Feb. 28, 2000. 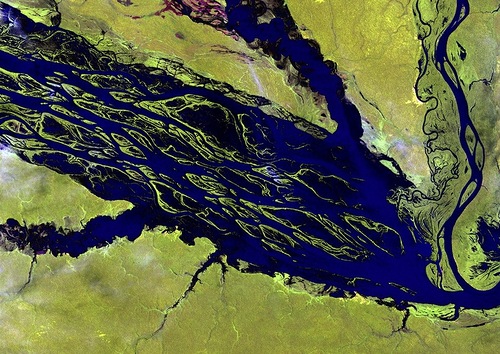 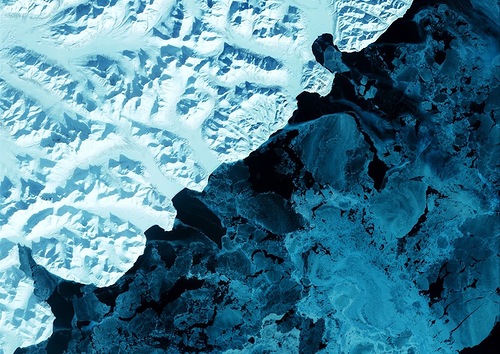 Kamchatka Peninsula. The eastern side of Russia’s Kamchatka Peninsula juts into the Pacific Ocean west of Alaska. In this winter image, a volcanic terrain is hidden under snow-covered peaks and valley glaciers feed blue ice into coastal waters. Image taken by ASTER on Feb. 17, 2002. 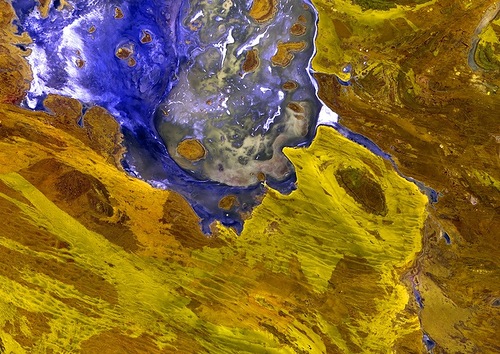 Lake Disappointment. Surrounded by sand dunes, Lake Disappointment is an ephemeral salt lake in one of the most remote areas of Western Australia. An early explorer supposedly named the lake in 1897 after following a number of creeks that he thought would lead to a large lake; they did, but the lake’s extremely salty water was not drinkable. Image taken by ASTER on Dec. 31, 2000. 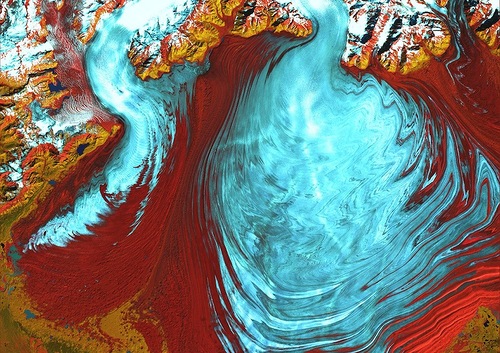 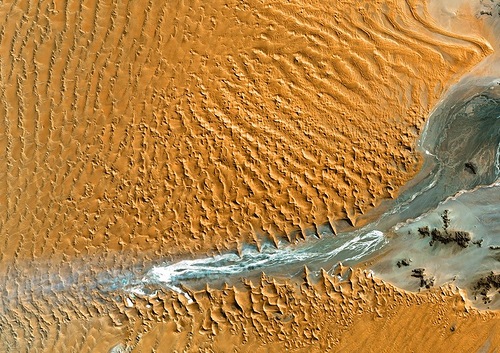 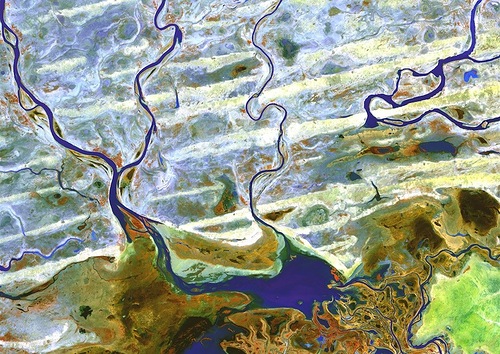 Coursing through parched, landlocked Mali in Western Africa, the Niger River skirts the edge of the dune-striped Sahara before turning sharply south to join the Bani River. At the confluence of the two rivers is an inland delta complete with narrow, twisting waterways, lagoons, and tiny islands. Image taken by ASTER on Feb. 8, 2003. 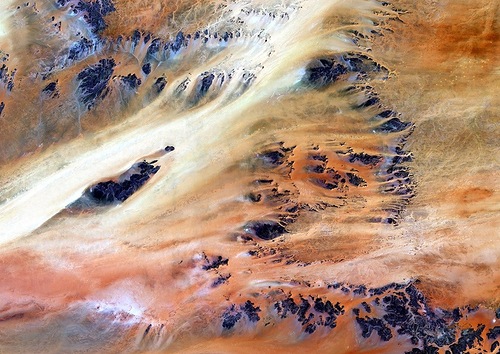 A series of rocky outcroppings are a prominent feature of this Sahara Desert landscape near the Terkezi Oasis in the country of Chad. Image taken by Landsat 7 on Oct. 22, 2000.

Valley glaciers appear as fingers of blue ice reaching out from the Vatnajokull Glacier in Iceland’s Skaftafell National Park. The park lies on the southern edge of Vatnajokull, Europe’s largest icecap. Image taken by Landsat 7 on Aug. 4, 1999.

Volcanoes, Chile – Argentine. Steep-sided volcanic cones along the Chilean-Argentinean border add texture to this “study in blue.” Of approximately 1800 volcanoes scattered across this region, 28 are active. Image taken by ASTER on Feb. 1, 2002. 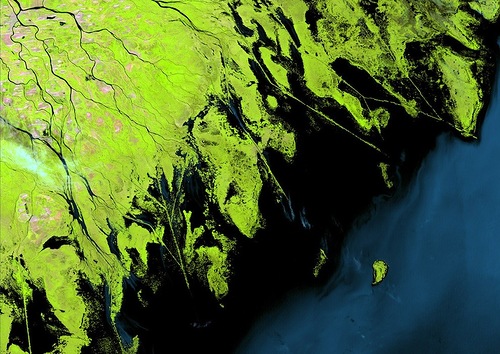 Where the Volga River flows into the Caspian Sea, it creates an extensive delta. The Volga Delta is comprised of more than 500 channels, and sustains the most productive fishing grounds in Eurasia. Image taken by Landsat 7 on Aug. 29, 2000. 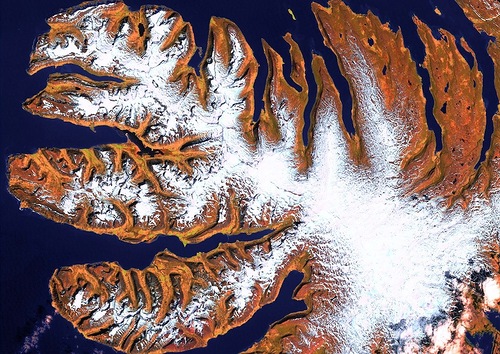 The West Fjords are a series of peninsulas in northwestern Iceland. They represent less than one-eighth the country’s land area, but their jagged perimeter accounts for more than half of Iceland’s total coastline. Image taken on June 6, 2000. Earth Art Photo: USGS/NASA.