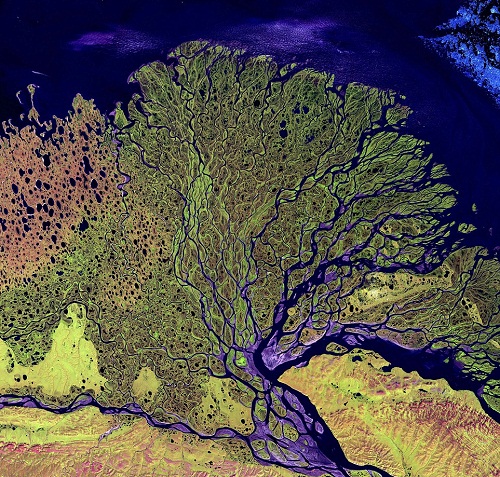 Like the tree of life, The Lena Delta in Russia. The beauty of the world a view from above

The beauty of the world a view from above
“Beautiful is seen at a distance.” A proverb.
The Lena Delta in Russia covers 61,000 square kilometers of land, with the delta about 30,000 square kilometers – one of the largest in the world.
If someone manages to not notice how beautiful our planet is, this selection of photos will persuade him, and anyone else that we all live in a wonderful world. It is necessary to look closely sometimes to the fact that around, and try not to spoil such beauty. 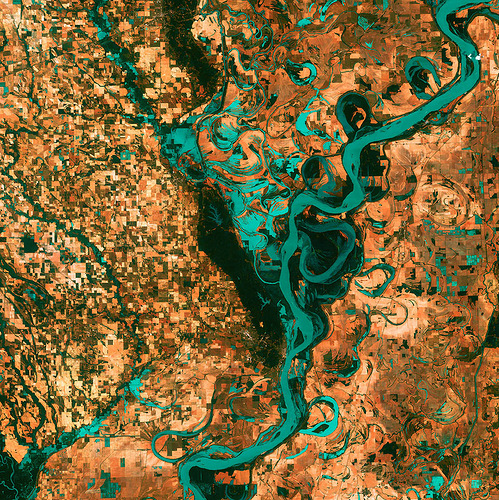 The Mississippi River. The beauty of the world a view from above

Small, blocky shapes of towns, fields and pastures surround the graceful swirls and whorls of the Mississippi River. Countless oxbow lakes and cutoffs accompany the meandering river south of Memphis, Tenn., on the border between Arkansas and Mississippi. The вЂњmighty MississippiвЂќ is the largest river system in North America. 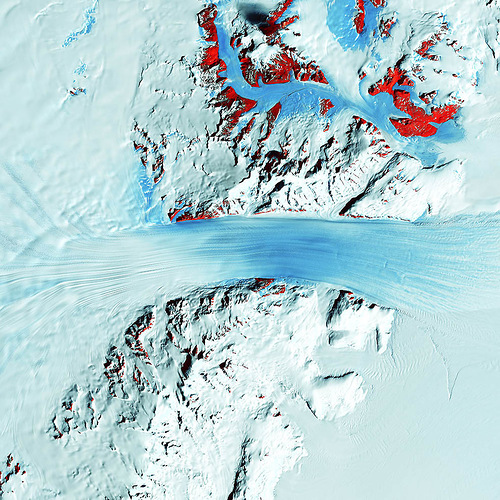 Truly a river of ice, Antarctica’s relatively fast-moving Byrd Glacier courses through the Trans antarctic Mountains at a rate of half a mile (0.8 kilometers) per year. More than 180 kilometers (112 miles) long, the glacier flows down from the polar plateau (left) to the Ross Ice Shelf (right). Long, sweeping flow lines are crossed in places by much shorter lines, which are deep cracks in the ice called crevasses. In this color-coded multi-spectral image, the conspicuous red patches indicate areas of exposed rock. 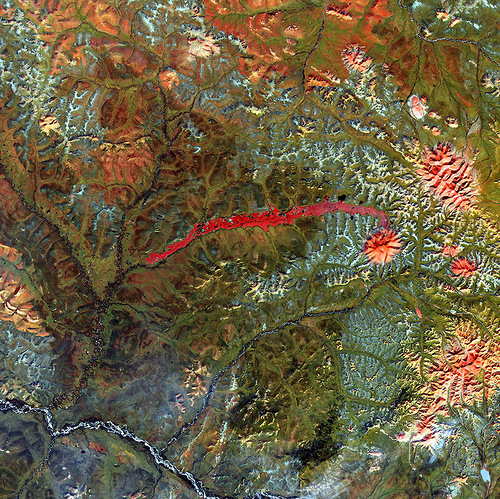 The prominent crimson streak in the center of this image represents the remains of an extensive lava and mud flow. Its source is the currently dormant Anyuyskiy Volcano in northeastern Russia, seen here as an orange circular shape at the right end of the streak. Remote and largely inaccessible, the region is a rugged collection of towering volcanic peaks, steep valleys and wild, snow-fed rivers and streams. 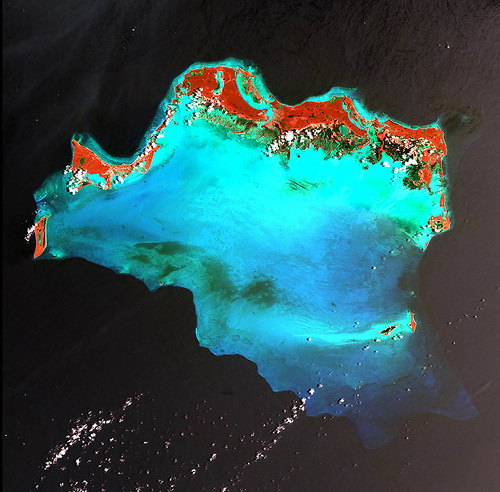 Located in the northern Caribbean, the Caicos Islands are a popular tourist attraction, renowned for their beautiful beaches, clear waters, scuba diving and luxury resorts. The islands lie primarily along the northern perimeter of the submerged Caicos Bank. A shallow limestone platform formed of sand, algae, and coral reefs covering 2,370 square miles (6,140 square kilometers). In this color-coded image, the Caicos Bank shows up in turquoise, and vegetation shows up in red. 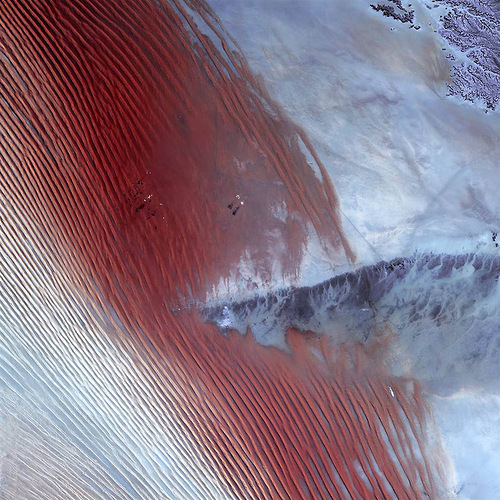 White pinpricks of cloud cast ebony shadows on the Rub al Khali, or Empty Quarter, near the border between Saudi Arabia and Yemen. The lines of wind-sculpted sand are characteristic of immense sand deserts, or sand seas, and the Rub al Khali is the largest desert of this type in the world. A highland ridge is just high enough to disturb the flow of the lines. In the center of that interruption lies the Saudi town of Sharurah. 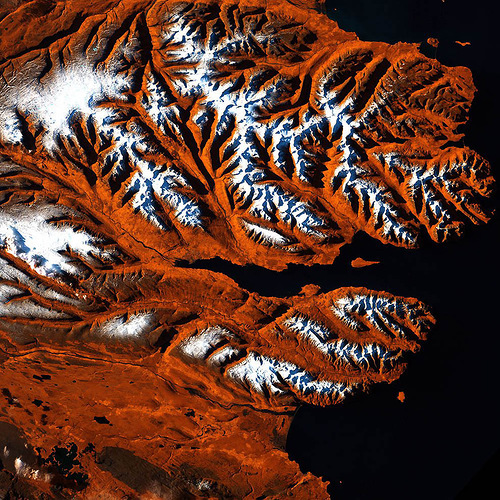 This stretch of Iceland’s northern coast resembles a tiger’s head, complete with stripes of orange, black and white. The tiger’s mouth is the great Eyjafjordur, a deep fjord that juts into the mainland between steep mountains. The ice-free port city of Akureyri lies near the fjord’s narrow tip, and is Iceland’s second-largest population center after the capital, Reykjavik. 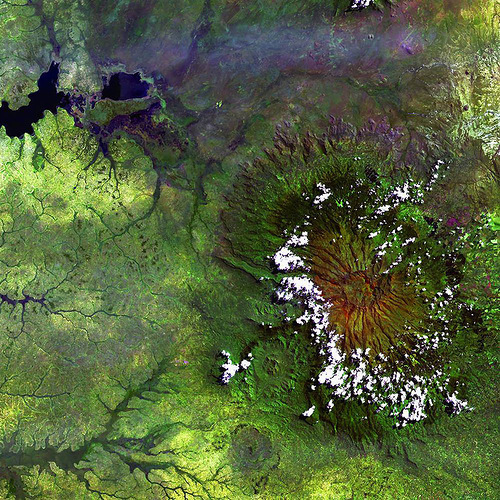 Clouds encircle the lofty rim of Africa’s Mount Elgon, a huge, long-extinct volcano on the border between Uganda and Kenya. The solitary volcano has one of the world’s largest intact calderas, a cauldronlike central depression. The caldera is about 4.5 miles (6.5 kilometers) across and formed following an eruption, when the emptied magma chamber collapsed under the weight of volcanic rock above it. (Photo by USGS/NASA) 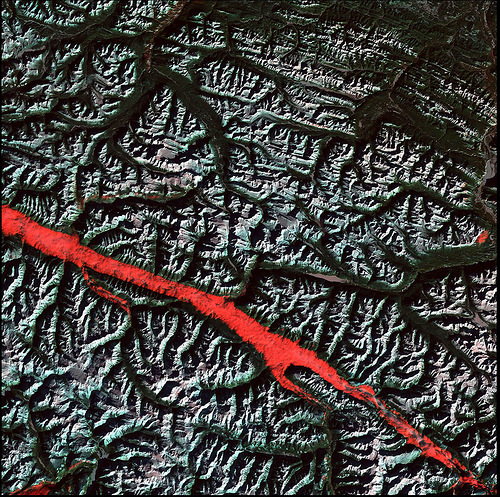 What appears to be a stroke of thick red paint is actually a remarkable interplay of light and cloud in the Canadian Rockies. Angling through the mountains is part of the Rocky Mountain Trench, a valley that extends from Montana to just south of the Yukon Territory. Low clouds filled a part of the trench near the border between the Canadian provinces of Alberta and British Columbia. The light-reflecting nature of the clouds, coupled with low sun elevation, resulted in this startling effect. (Photo by USGS/NASA) 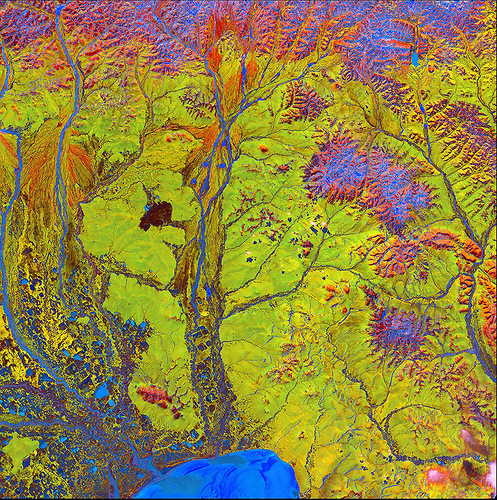 Vivid colors and bizarre shapes come together in a false-color image that could be an illustration for a fantasy story. This labyrinth of exotic features winds its way along the edge of Russian Chaunskaya Bay in northeastern Siberia. Seen as a vivid blue half-circle at the bottom of the image Two major rivers, the Chaun and Palyavaam, flow into the bay, which in turn opens into the Arctic Ocean. Ribbon lakes and bogs are present throughout the area, created by depressions left by receding glaciers. (Photo by USGS/NASA) 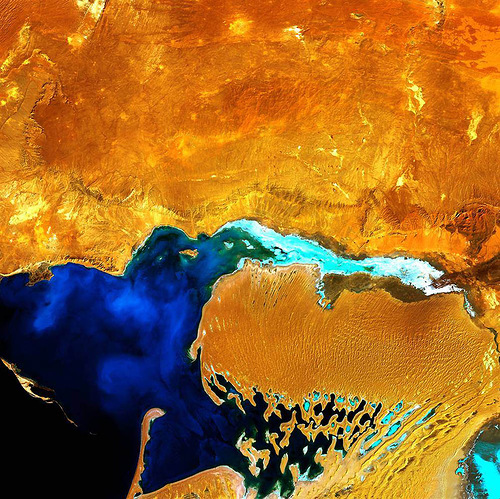 Looking like a monstrous ogre with something gooey in its mouth, the Dardzha Peninsula in western Turkmenistan lies among the shallow coastal terraces of the Caspian Sea. Strong winds create huge sand dunes near the water, some of which are partly submerged. Further inland, the dunes transition to low sand plains. 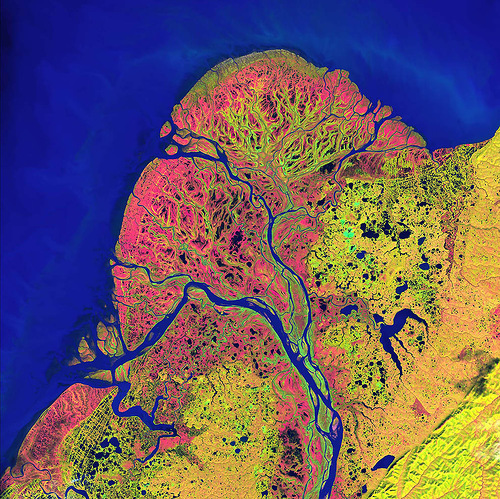 After beginning in northern British Columbia and flowing through Canada’s Yukon Territory, the Yukon River crosses Alaska before emptying into the Bering Sea. Countless lakes, sloughs and ponds – scattered throughout this scene of the Yukon Delta. The river’s sinuous, branching waterways seem like blood vessels branching out to enclose an organ. In fact, it is one of the largest river deltas in the world. Besides, currently protected as part of the Yukon Delta National Wildlife Refuge.

The stunning blood vessels of our planet: How river deltas change our world. In addition, they change the lives of the 500 million people who live on their shores. 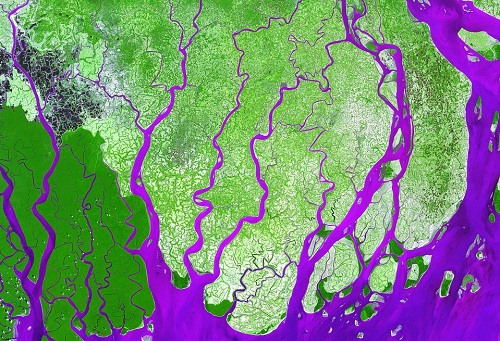 The delta in Ganges River, Bangladesh, with false colors serving as a contrast between land and water 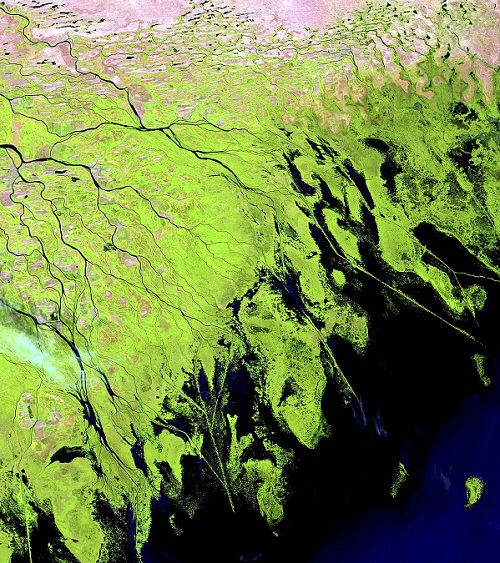 The Yukon river delta, Alaska, is bigger than the state of Oregon, and around 25,000 people live around the borders 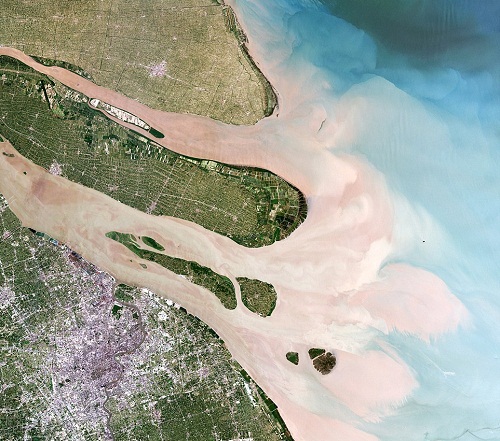 Shanghai, China: A satellite image shows the important sea port in the Shanghai and the Yangtze river estuary 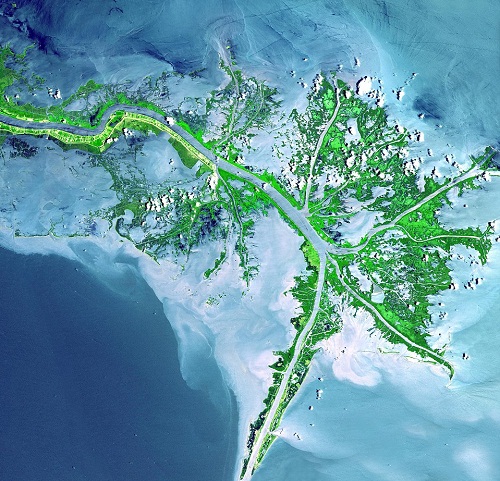 A river runs through it: a delta in Mississippi, United States, showing odd bits of vegetation escaping the water 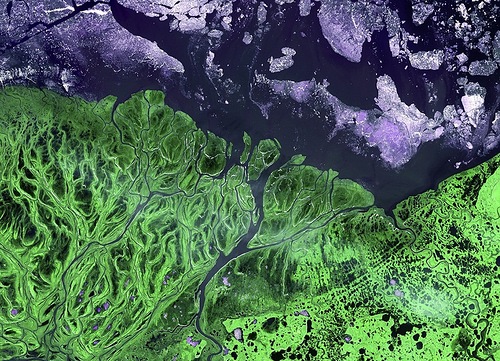 In Bijagos archipelago, West Africa, with 20 of 80 inhabited islands. By the way, doesn’t it look like a Van Gogh painting? 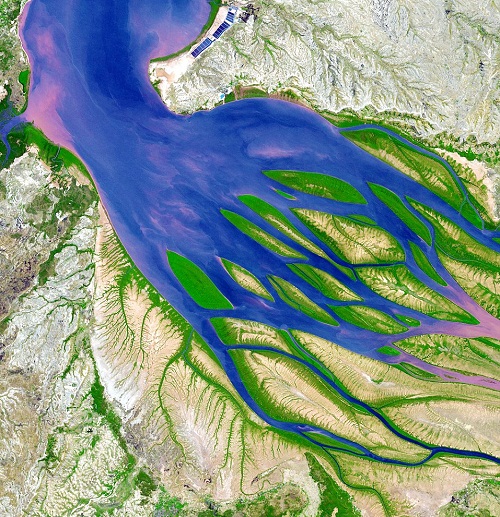 This satellite image shows a Delta in Bombetoka Bay, Madagascar. In fact, 500 million people live around the banks of deltas like these 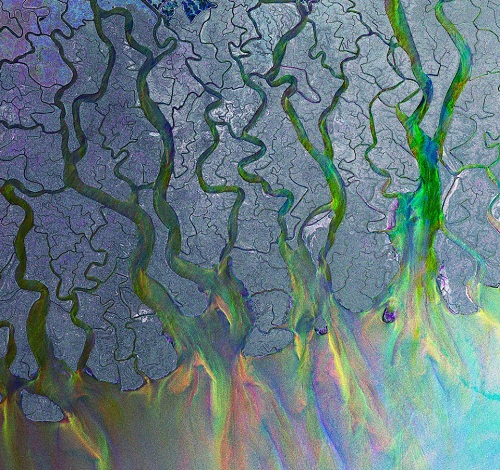 The Ganges River, Bangladesh, the most sacred river in the world to Hindus, for a variety of religious and historical reasons 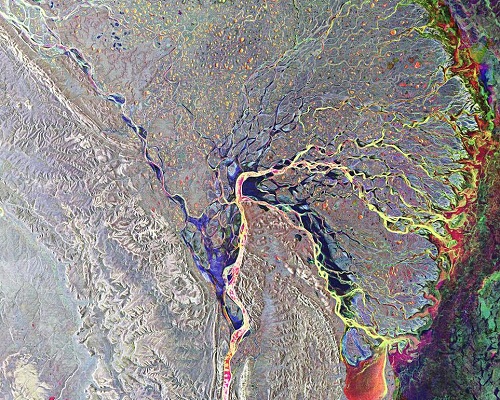 Another image of the Lena delta in Russia, with false-colors highlighting different sediments 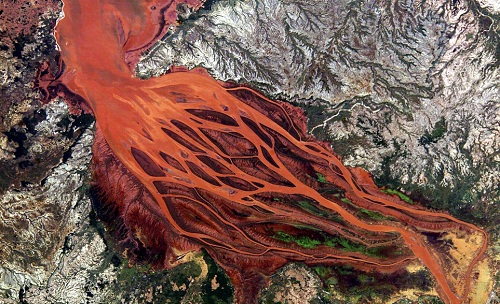 The Betsiboka estuary in Madagascar, which carries lots of reddish silt down to the sea – natural erosion is causing a lot of damage to the area