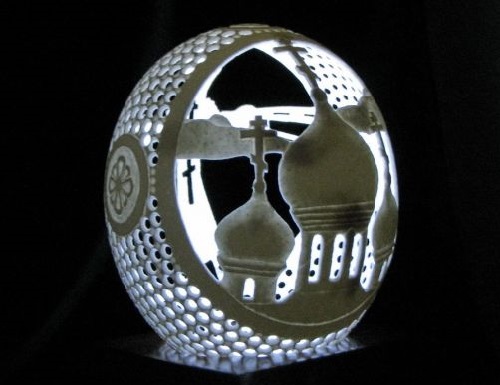 Filigree eggshell carving by Igor Rud
Beautiful filigree carving on goose, ostrich eggshell is made by Russian artist Igor Rud. The egg is nature’s perfect package. It has, during the span of history, represented mystery, magic, medicine, food and omen. It is the universal symbol of Easter celebrations throughout the world and has been dyed, painted, adorned and embellished in the celebration of its special symbolism. 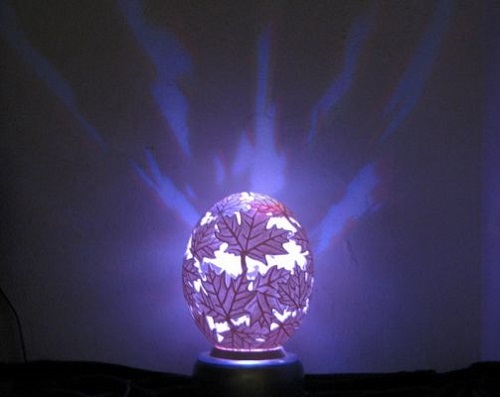 Before the egg became closely entwined with the Christian Easter, it was honored during many rite-of-Spring festivals. The Romans, Gauls, Chinese, Egyptians and Persians all cherished the egg as a symbol of the universe. From ancient times eggs were dyed, exchanged and shown reverence.

Meanwhile, in Pagan times the egg represented the rebirth of the earth. The long, hard winter was over; the earth burst forth and was reborn just as the egg miraculously burst forth with life. The egg, therefore, was believed to have special powers. It was buried under the foundations of buildings to ward off evil; pregnant young Roman women carried an egg on their persons to foretell the sex of their unborn children; French brides stepped upon an egg before crossing the threshold of their new homes.

With the advent of Christianity the symbolism of the egg changed to represent, not nature’s rebirth, but the rebirth of man. Christians embraced the egg symbol and likened it to the tomb from which Christ rose. 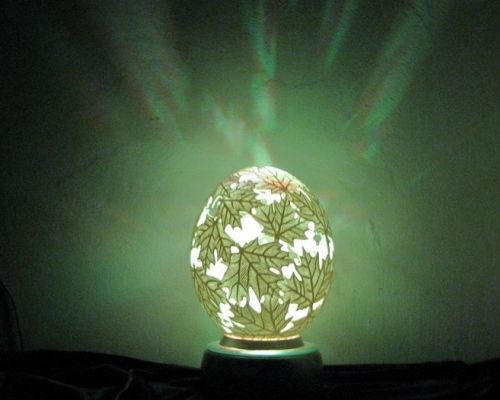 Old Polish legends blended folklore and Christian beliefs and firmly attached the egg to the Easter celebration. One legend concerns the Virgin Mary. It tells of the time Mary gave eggs to the soldiers at the cross. She entreated them to be less cruel and she wept. The tears of Mary fell upon the eggs, spotting them with dots of brilliant color.

Another Polish legend tells of when Mary Magdalen went to the sepulcher to anoint the body of Jesus. She had with her a basket of eggs to serve as a repast. When she arrived at the sepulcher and uncovered the eggs, the pure white shells had miraculously taken on a rainbow of colors.

Decorating and coloring eggs for Easter was the custom in England during the middle ages. The household accounts of Edward I, for the year 1290, recorded an expenditure of eighteen pence for four hundred and fifty eggs to be gold-leafed and colored for Easter gifts. 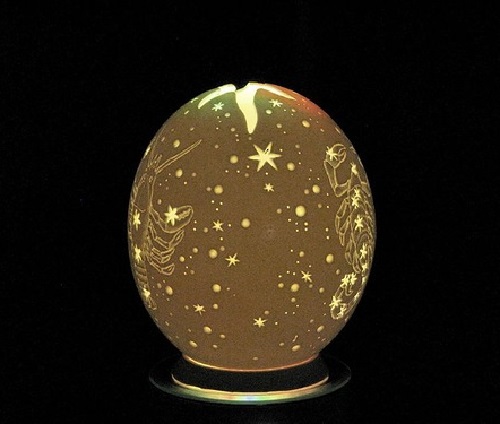 The most famous decorated Easter eggs were those made by the well-known goldsmith, Peter Carl Faberge. In 1883 the Russian Czar, Alexander, commissioned Faberge to make a special Easter gift for his wife, the Empress Marie.

The first Faberge egg was an egg within an egg. It had an outside shell of platinum and enameled white which opened to reveal a smaller gold egg. The smaller egg, in turn, opened to display a golden chicken and a jeweled replica of the Imperial crown.

This special Faberge egg so delighted the Czarina that the Czar promptly ordered the Faberge firm to design further eggs to be delivered every Easter. In later years Nicholas II, Alexander’s son, continued the custom. Fifty-seven eggs were made in all.

Ornamental egg designers believe in the symbolism of the egg and celebrate the egg by decorating it with superb artistry. Some use flowers and leaves from greeting cards, tiny cherubs, jewels and elegant fabrics, braids and trims, to adorn the eggs. They are separated, delicately hinged and glued with epoxy and transparent cement, then when completed, they are covered with a glossy resin finish. Although the omens and the mystery of the egg have disappeared today, the symbolism remains, and artists continue in the old world tradition of adorning eggs. 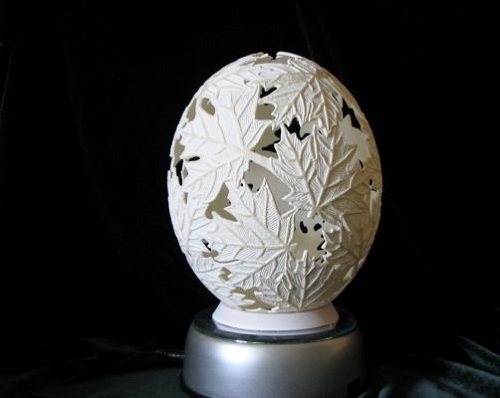 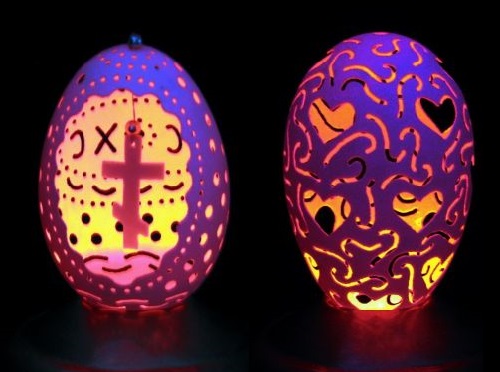 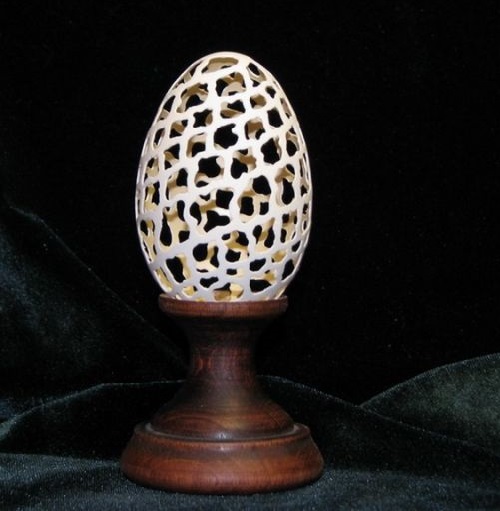 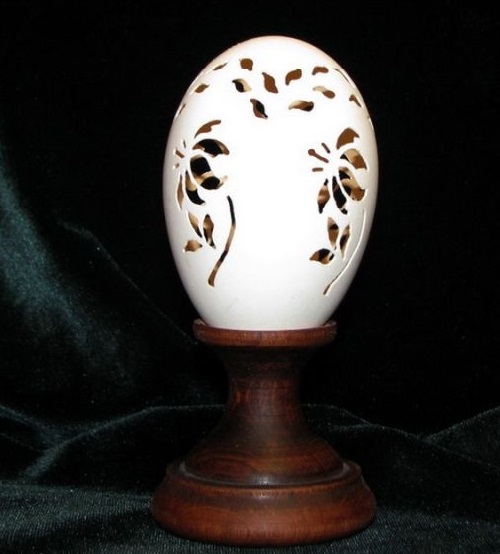 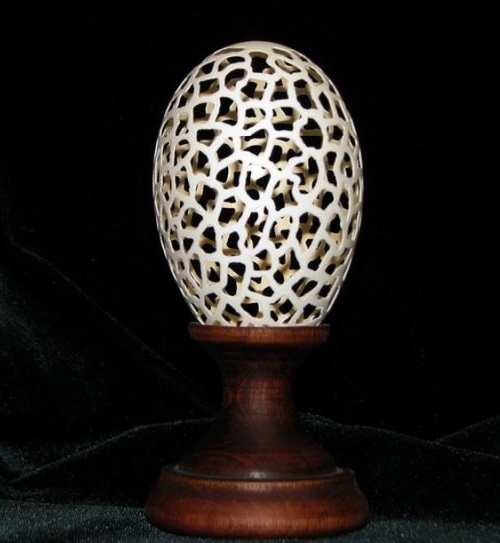 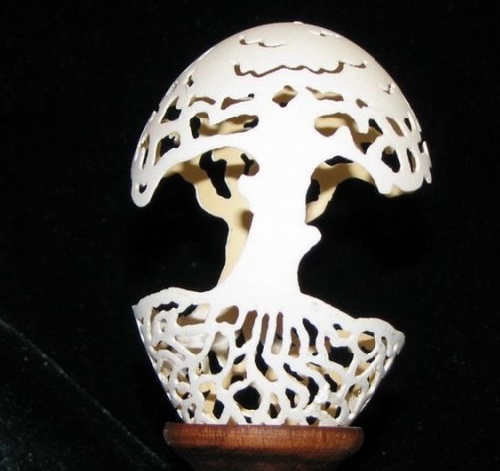 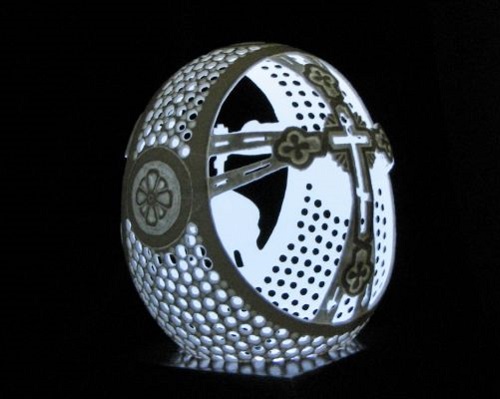 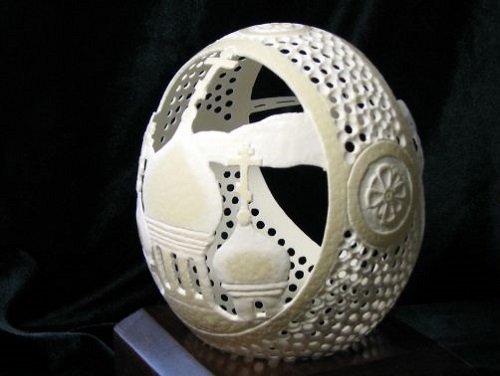 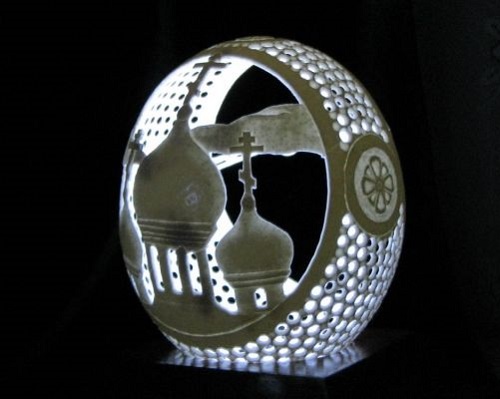 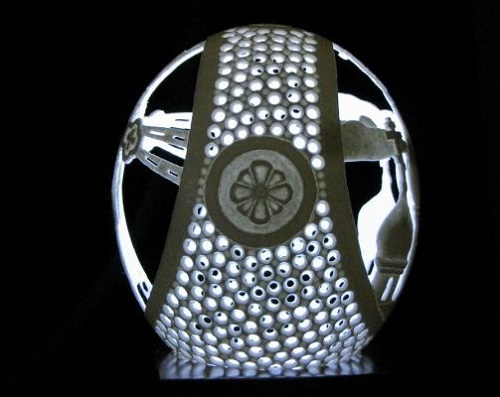