Ideal of beauty for Renoir 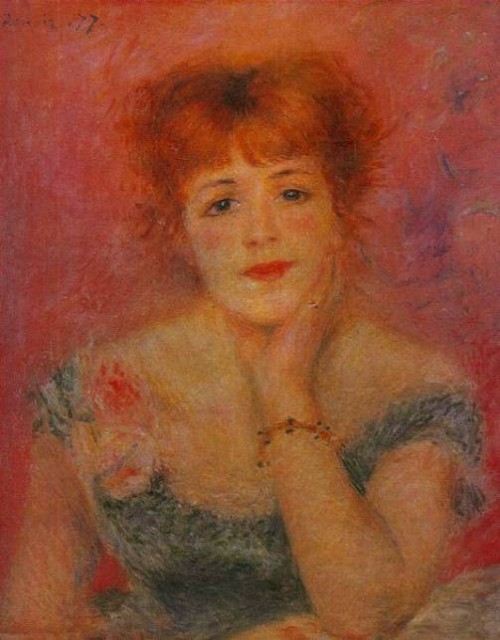 Ideal of beauty for Renoir. “I loved women when even did not know how to walk” – said Pierre-Auguste Renoir. He believed that women bring to the world beauty and joy, and these two phenomena are main in Art. “For me the picture … should always be pleasant, joyful and beautiful, yes – beautiful! In life is enough of boring stuff … I know it is difficult to achieve the recognition that great art can be joyous. ” 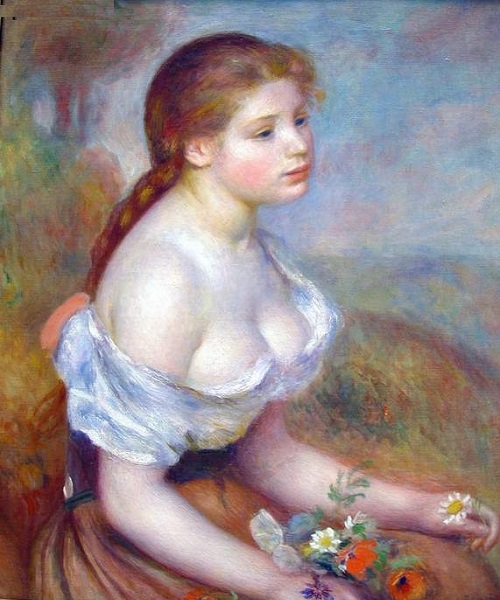 Of all the bohemians for some reason artists are least likely to be happy in marriage. And when there’s an exception to this unwritten rule, it seems so awesome … “Renoir is not made for marriage, – said one of the most famous muses of the artist, actress Jeanne Samari. – He marries all women, whom he paints, through the touch of his brush”. And all who knew Auguste, were confident in its correctness. It was until Renoir married Aline Victorine Charigot. 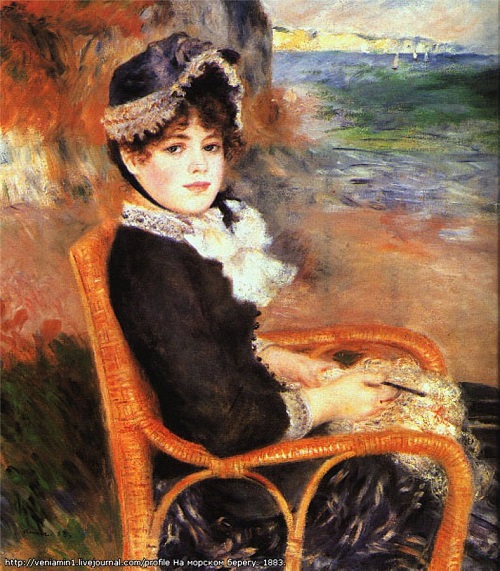 At the seaside. Portrait of Aline Victorine Charigot, 1883

It is this woman embodied the ideal of beauty for Renoir, of which he dreamed long before her birth. And she became not only the artist’s model, but sweetheart, wife, keeper of his hearth. And she remained his muse, even when her beauty stayed only in his memories. 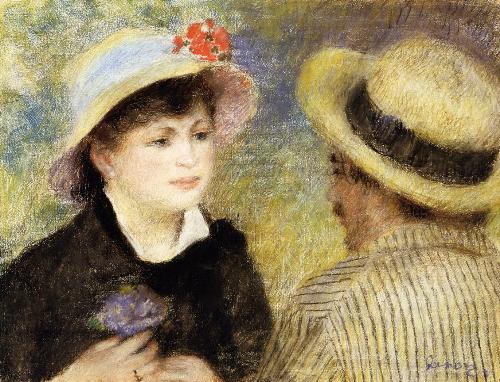 Aline Charigot came from a family of Essua winegrower, a small town between Troyes and Chatillon-sur-Seine in the Champagne region. Her ancestors lived in Essua for several generations. Alinу’s mother was a dressmaker. Alina’s father did not get along with his wife, he left his family to go to America. Alinу had a difficult childhood. Mother found work away from home, the father came to Essua very rare. In 1872, her mother Emily leaves to work in Paris. In 1874 Aline aged 15 years arrives in Paris to her mother and starts to work there as a seamstress.

Renoir met the girl in front of his home in the dairy of Madame Camille in the Rue Saint-Georges in late summer 1880. She was almost 20 years younger than the artist. Mutual attraction between Aline and Renoir was impossible not to notice. Aline, the daughter of a simple farmer, was not allocated any special talents. Aline simply becomes his model, but soon their relationship went further than the case with other nudes. She became his lover. Shapely blond, Alinу, according to the artist, was very “cozy”. “She wants a pat on the back, like a kitten,” – said the enchanted Renoir. 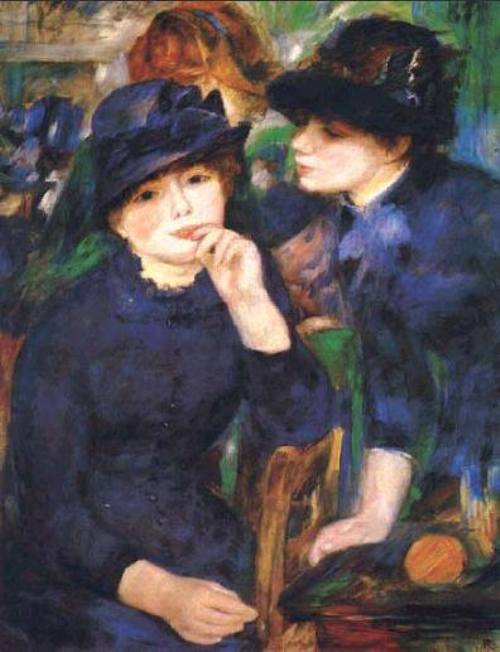 In painting, Alina understood little. And yet, looking how Renoir wielded his brushes, she felt wonderfully exciting feeling the fullness of life. She had irresistible feeling that being with him, means to be in contact with something most important, authentic, that she could not express in words, with something radically different from what she had met so far. 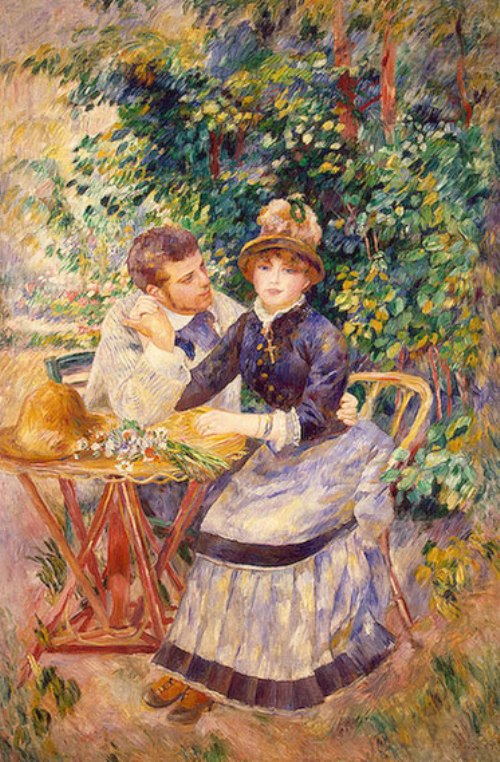 In the Garden, 1885, oil on canvas, The State Hermitage Museum, St. Petersburg. “In the Garden” never exhibited and remained virtually unknown to the public. In his love scenes Renoir usually portrayed Alina Auguste, but next to her instead of himself he put one of his friends. So, this was an artist Henri Laurent.

Guided by true instinct inherent in some women, Aline from the first days realized that Renoir was genius. It was indisputable truth for her.

Cherished his bachelor habits, jealously guarding his independence, Renoir never imagined that any woman can become a friend for life. Indeed, since 1880, in painting and drawings by Renoir increasingly appears the face of a young girl with round cheeks and short slightly upturned nose. 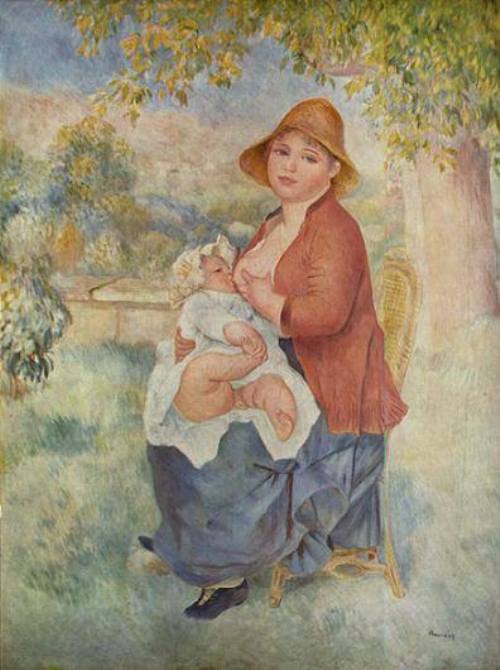 He couldn’t resist the adoration by absolute beauty of Aline. Aline, who knew a lot about good kitchen, and good wine, became a wonderful wife for the artist (although they have entered into a formal marriage only five years after the birth of their first son, Jean). She did not pose as a wife of a great artist, did not get stuck in intelligent conversations, preferring to express her attitude towards her husband and his friends in the kitchen. And she did it great. When the couple lived in Montmartre, Renoir’s house, with limited funds, was known as the most hospitable. Guest could always count on the generous plate of boiled beef with vegetables.

Having become the wife of the artist, Aline managed to make their lives easier, fencing Renoir from all that could hinder his work. He is poor or rich, famous or forgotten, for her it did not matter. Aline quickly gained universal respect. And even misogynist Degas saw her one day at one of the shows, said: “She looks like a queen visiting stray acrobats.” 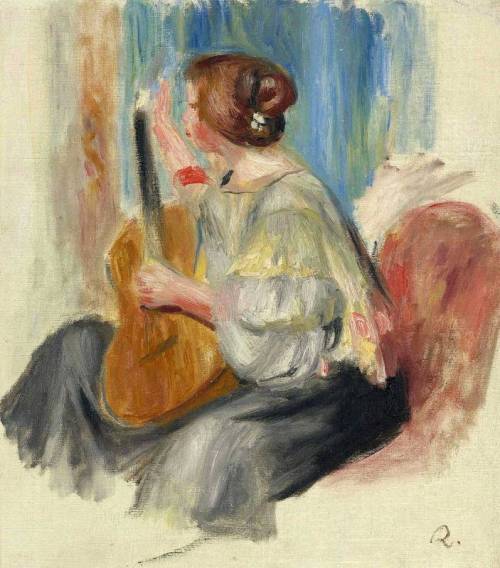 About the wife of Auguste gossiped a lot. But all gossips about Renoir’s new models and muses did not threaten the position of Madame Renoir: because she was the mother of his children and the mistress of his house. Aline protected the husband from any worries, not associated with creativity. She took care of him when he was ill, and he was often ill – constantly cold. And Renoir paid her respect and sincere, spiritual love. “When getting old together,- Renoir explained patiently to Berthe Morisot, who did not understand why he looks adoringly at his not so beautiful wife – “Wrinkles disappear when you love, and I’m not wise enough to explain everything, but it includes a habit.” 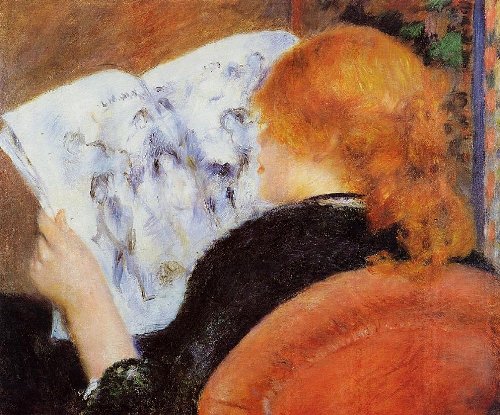 Renoir appreciated the care of his wife and grown-up sons, he said: “She gave me the opportunity to creatively think. She was able to keep me around activities that corresponded to my care”. And worries he had many. He was looking for his own creative style, experiencing periods of watercolor, then imitation of Ingres … 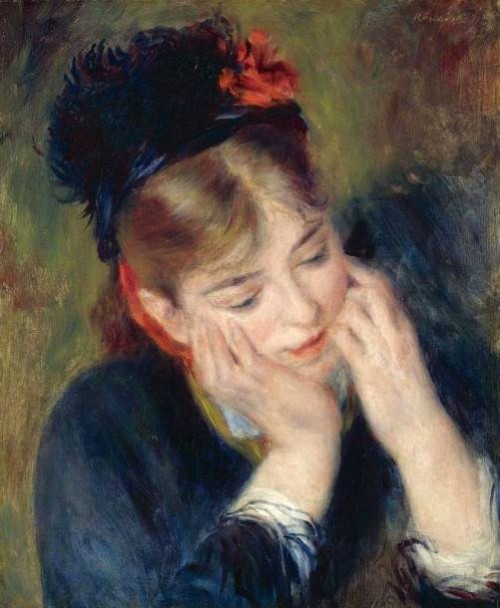 In 1901 Aline gave birth to a third son, Claude. Spouses Renoir moved to the mansion, surrounded by a garden with five hundred-year-old olive trees. Last childbearing was hard, there were problems with the heart, back was aching, Aline suffered shortness of breath and walked with difficulty. And yet they were happy. Renoir seems to have never lost heart. “Whatever you say, I am Lucky!” – He said. His work has been claimed, he could still paint and appreciate every hour, when he could hold a brush in his hand.

Aline Charrigaud loved the evenings, when she and her husband sat in front of each other and had long, quiet conversations about past and present, children and nature, art. Having lived near the artist for so many years, imbued with all their cares, peasant learned well to understand painting.

Happiness ended in 1914, with the outbreak of war. Pierre and Jean enrolled in the army of volunteers. From worries about children Alina fell ill with diabetes. Alina hid her illness from Auguste: he also suffered because of sons. She tried to appear strong and cheerful. Even when the news on wounding Pierre came, then followed – on wounding Jean. She went to visit the boys in hospitals: Pierre in Carcassonne, and Jean – in Luzon. Returned completely exhausted, fell ill …

She died June 27, 1915. Before her last breath, Auguste was taken in a wheelchair to say goodbye to her. He stared into the face of the one with whom happily lived thirty-five years. And then quickly kissed her on the lips and ordered the nurse, “Come on!” He asked to take him to the studio, where he immediately sat down at the easel on which was fixed the unfinished still life with roses – and took up his brush. Friends feared that his wife’s death would kill Auguste, but Renoir lived four years more.

Ideal of beauty for Renoir 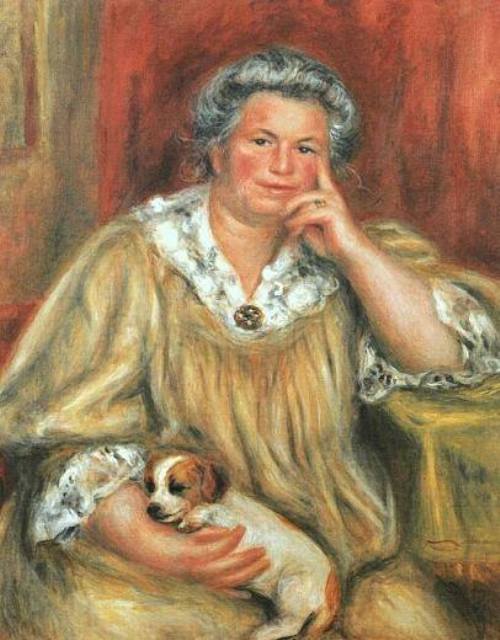 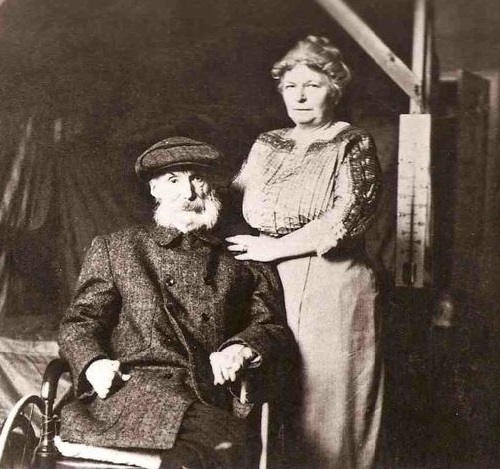 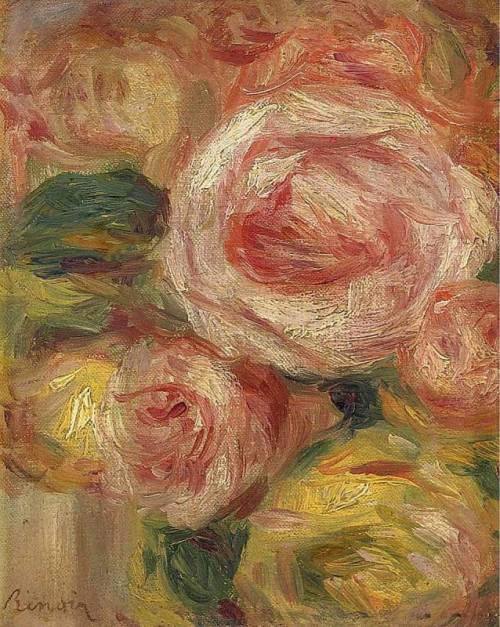 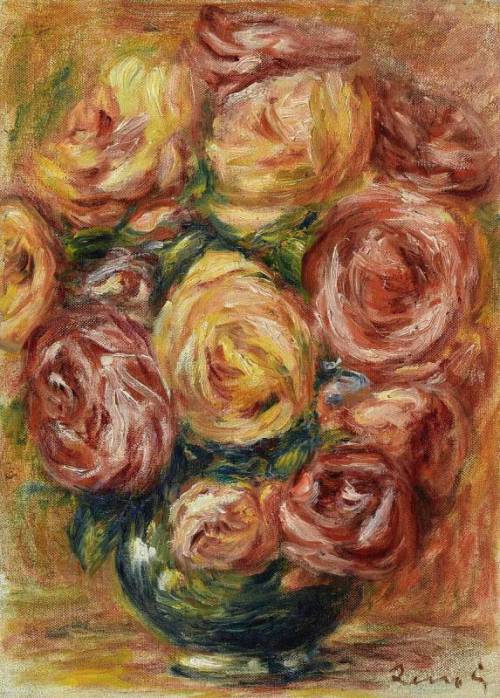 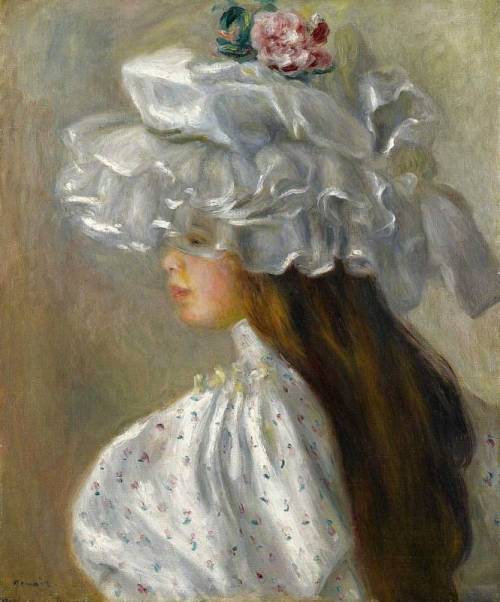 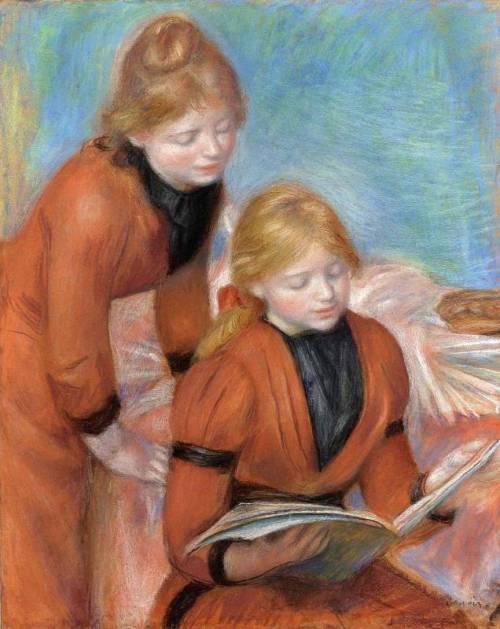 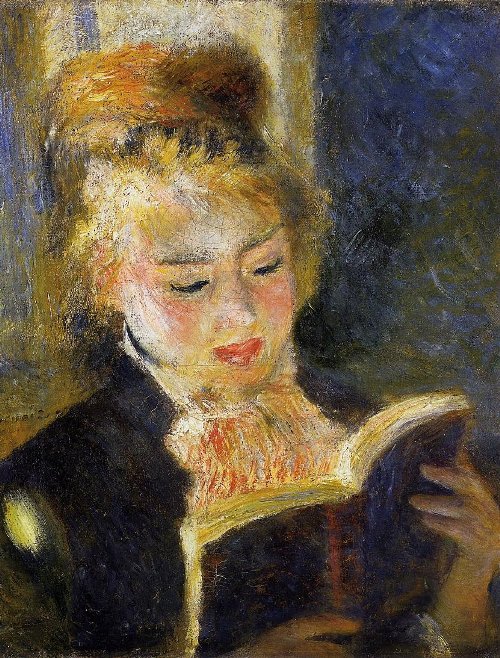 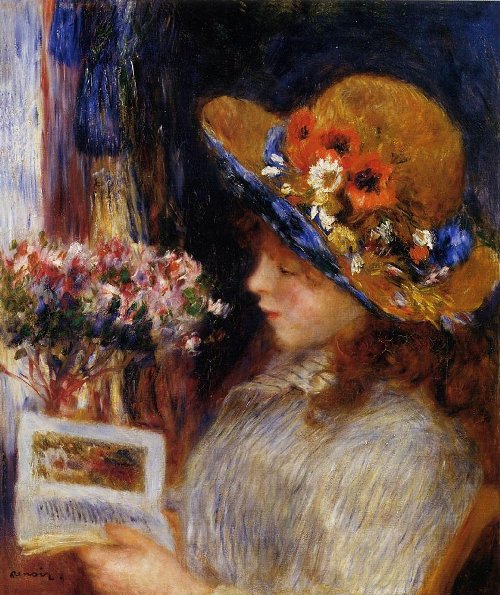 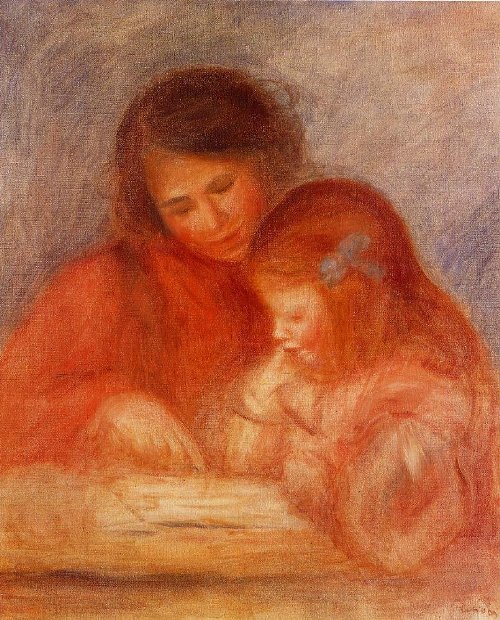 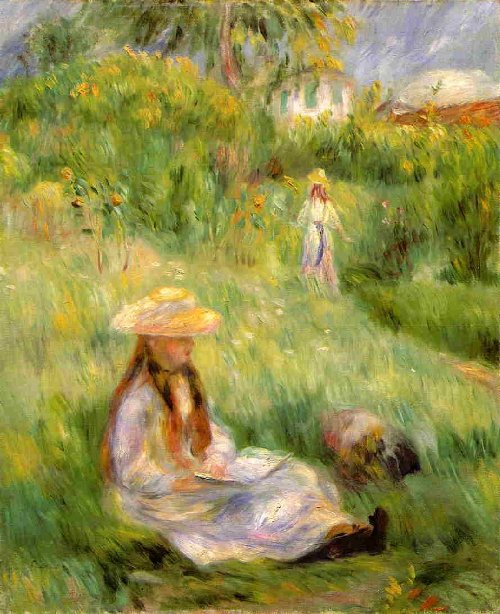