Italian beauty icon Gina Lollobrigida
Born 4 July 1927, Gina Lollobrigida has celebrated her 90th birthday! At one time, for participation in the film, she received the highest fees in the film, and more than four hundred magazines a year reproduced her portrait on the covers. Among them, the American “Time”, which of the European celebrities gave this honor only to Pope Pius XII. She starred in more than 100 films, and tried herself as a screenwriter and director, journalist, photographer, sculptor and many other things.
Meanwhile, Lollobrigida entitled her biography: “My wonderful adventure.” It is really wonderful, her biography. And not only hers. Many movie stars of the world underwent such a sudden transformation of Cinderella into a princess. Not a talent, not a calling, but a chance, a happy coincidence of circumstances decided their fate.
Lollobrigida’s luck was accompanied by talent. A lucky fate fell to Lollobrigida. But it is unlikely that the actress has forgotten the years of misery and grief that preceded it.
During the war, Gina learned how to weave straw sandals and remade soldier’s shirts in blouses. In 1945, the family moved to Rome, on one of the crooked streets of the outskirts, crossed with clotheslines, which we are so familiar with the films of Rossellini and DeSantis. 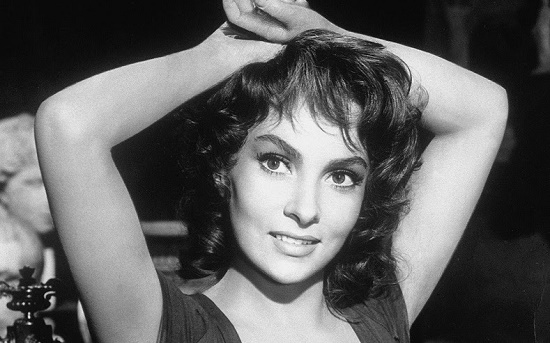 The whole family is in the same room. Half-starved diet for refugees … Finally, two of Gina’s sisters find work in a department store. And she herself suddenly becomes an artist. Her cartoons are very popular. But the girl dreams of another. She dreams of the opera scene in a dream and in reality. All that can be snatched from earnings, she spends for singing lessons. 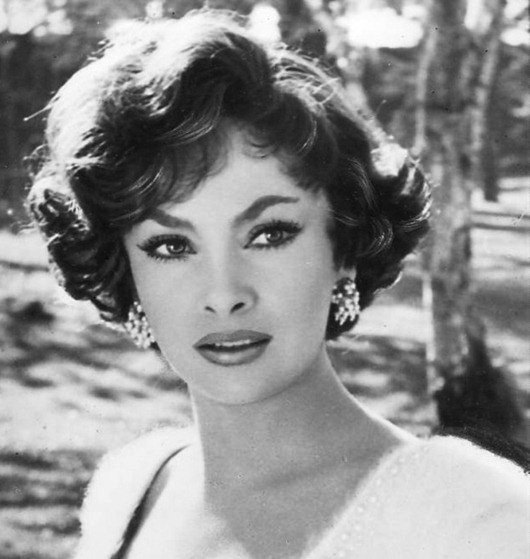 Often in the dark Italian evenings one could hear Gina’s voice. Arias and romances, which the teacher asked, suddenly gave way to a provocative, temperamental folk song. And when the song was over, exclamations of enthusiasm and applause came from the street. These are the first fans. While there were not many of them. Only residents of a narrow, crooked street on the outskirts of Rome … 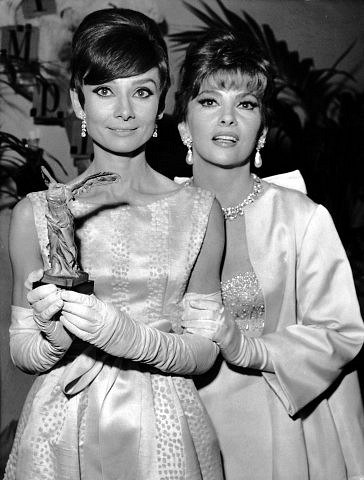 When Lollobrigida was asked at one of the press conferences about her feelings upon having gained worldwide fame and universal popularity, she replied: “First of all, a sense of great responsibility. In fact, now it is necessary, that each following role to be better than the previous one. And this is so difficult, given the standard scenarios in which I have to play … I would prefer not to be shot in expensive action movies, but in the films of directors, let the little-known ones, but those who are looking for something, and try to tell the truth from the screen … However … In life, it does not always work out the way we want … ” 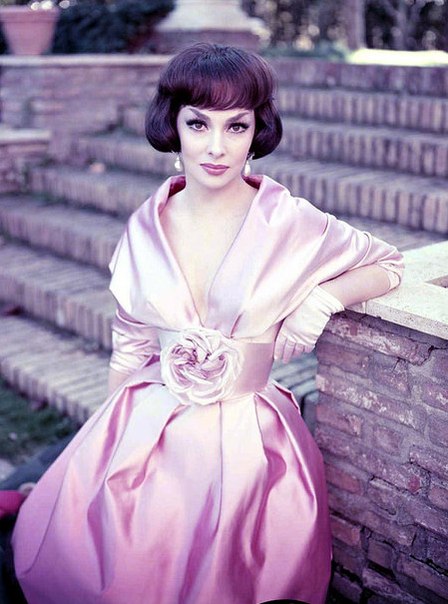 So, Lollobrigida used to say that she has won the right to choose, accept or reject the proposals of the producers. And at the beginning of the journey? For a simple statistic, any episode in the film was already happiness. She still has the rough voice of an assistant director during the first screen test: “Get out. So that I will not see you again. You can come when you gain ten pounds in weight.” 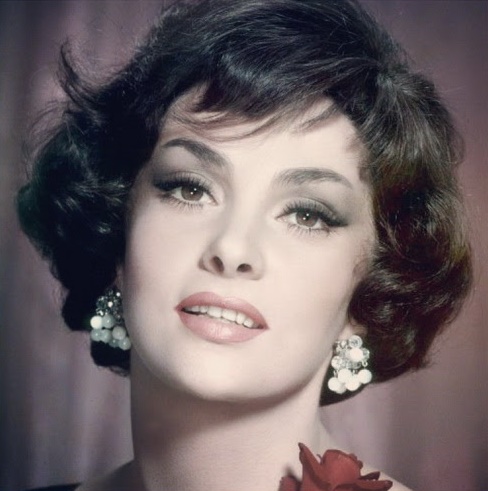 The first luck came in 1947. And not in the movies, but at the beauty contest in Rome: the second place and the right to participate in the beauty pageant “Miss Italy”. Then the cinematographers noticed Gina, and, accordingly, invitations and contracts followed. But luck was not in the fact that they noticed. But the fact that Lollobrigida found the strength to renounce the bondage agreements. Thus, in the contract of the Hollywood producer Howard Hughes everything was stipulated – illnesses, injuries, sports, war, even a revolution… .

– And what roles will I have to play? Gina asked.
– It’s none of your business. These are our concerns.
– And I can not give up the role, if I do not like it?
– Of course not. You are the property of the firm!
And Gina does not sign a tempting contract. She was able to do this because she was supported by friends who understood: it is worth stumbling only once – then nothing will hold. How many tragic destinies passed before their eyes, when talent, beauty and youth were sold to dealers from art, and then they were ruthlessly thrown away by the filmmaking machine.

In the “Miss Italy” competition in 1947, Lollobrigida was third. Since this year, she considers herself a professional actress. Merit here does not belong to one Gina. Next to her was a close, loving person who always supported in her faith in the vocation of the film actress, helped to avoid many temptations of life, to withstand the struggle. They met by chance, at a meeting of the New, in 1946, – Gina and an immigrant physician from Yugoslavia, Milko Skofich. They were not separated after that New Year’s Eve, and, as Gina says, “Milko heroically endures the difficult fate of the movie star’s husband.” 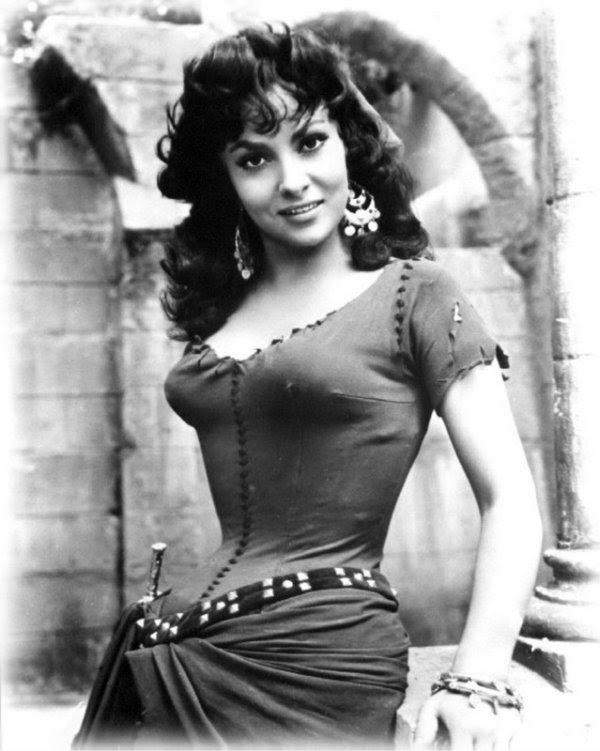 Lollobrigida had serious views on cinema very early. And it’s not her fault that they just barely appeared in her first roles. Perhaps, only with the “Fanfan-Tulip”, staged by the wonderful French director Christian-Jacques, you can start an account of the serious works of Lollobrigida. It was 1951 … What is the secret of the overwhelming success of Gina as the soldier’s daughter Adeline? How she managed – the brave and faithful love of Fanfan-Tulip – not to dissolve in the rays of the sun talent Gerard Filip, but shine next to him. For this, only women’s beauty and charm are not enough. According to French journalist A. Savaris, “in addition to her legendary excellence, Gina also has a true acting talent.” This is not an actress of unexpected reincarnations, roles that are not recognizable from each other. No. Success accompanies Gina only when on the screen is to create an image of a girl close to her from the people. A simple Italian, she organically absorbed the best features of her talented nation. 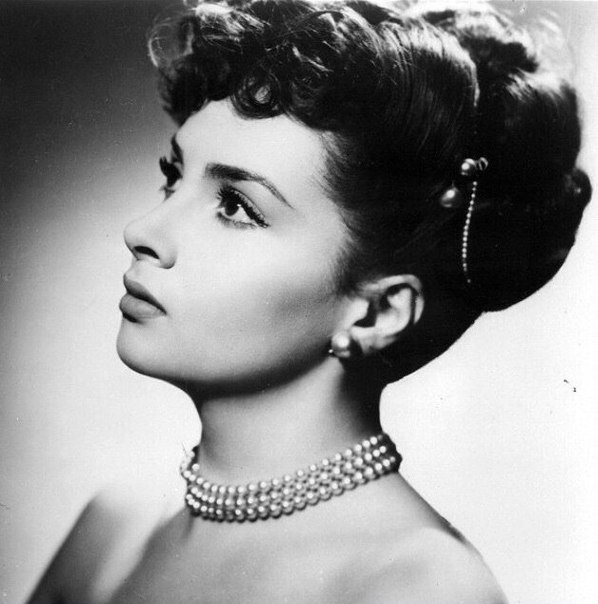 Whether it is France, or in America, if Gina is in the film, then we will meet with the vivid image of a woman whose deep black eyes can suddenly be lit by a wonderful, joyful fire in order to shine in a minute with tears of resentment. Or we will see a simple, modest girl who is not proud of the luxury of clothes, but her maidenly honor. And we will again admire her wonderful dances born not in the laboratory of the choreographer but in the outskirts of Milan or Palermo. In a truly popular manner, the game is the secret of Lollobrigida’s success. And when she does not change the reliability of life – she wins.

“If only the roles were more interesting!” – exclaimed Lollobrigida many times. She loves Tolstoy and Dostoevsky, and dreamed of playing in “Three Sisters” … But she played night beauties, provincials … “An unsuccessful artist, a modest statistician and mannequin became a movie star,” Gina concludes her autobiography. 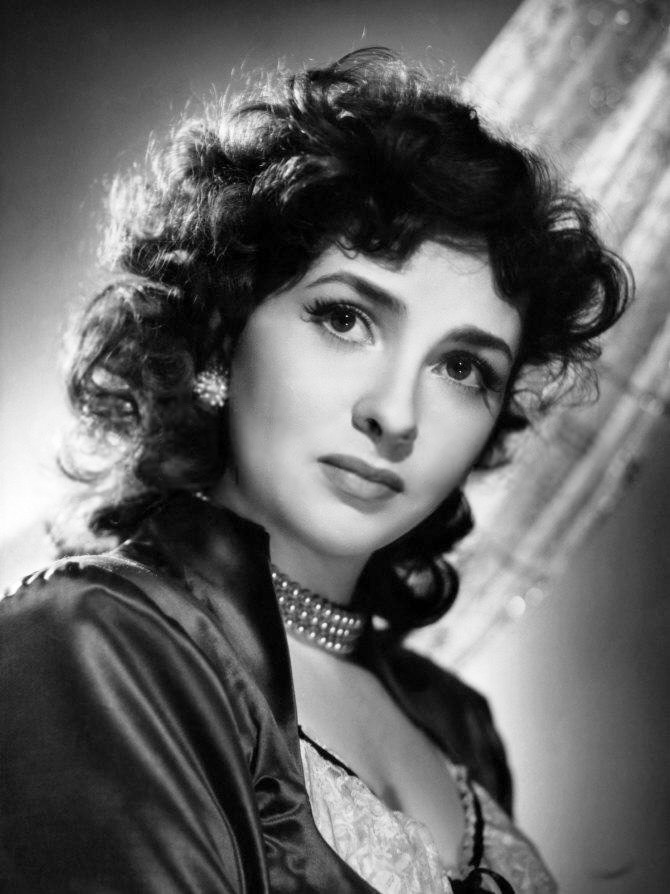 In the biography of Italian beauty icon Gina Lollobrigida was a place for private life. At age 22 she married Milko Skofich, a doctor from Yugoslavia, in a mad and pure love. In their marriage, the beloved and only son Milko Jr. was born. Marriage lasted almost 20 years, but eventually the union broke up. Because of the incredible beauty of the actress, she had a huge number of fans. In particular, among the men of Gina Lollobrigida were Yun Brynner, Josh Klaufman and even Frank Sinatra, but Gina never married again. 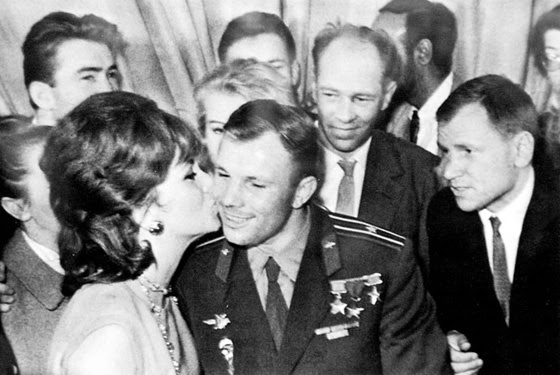 The admirer of her beauty was Yuri Gagarin. However, as Gina herself admitted, their sympathy was mutual 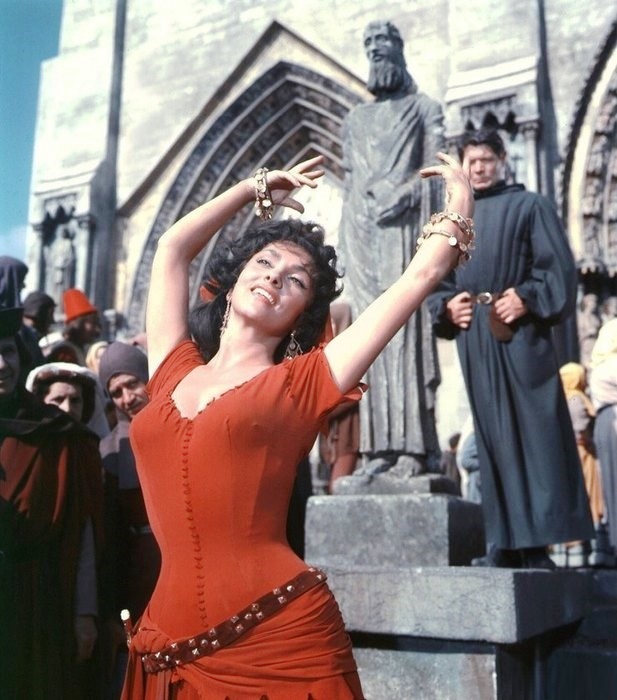 as Esmeralda in The Hunchback of Notre Dame 1956 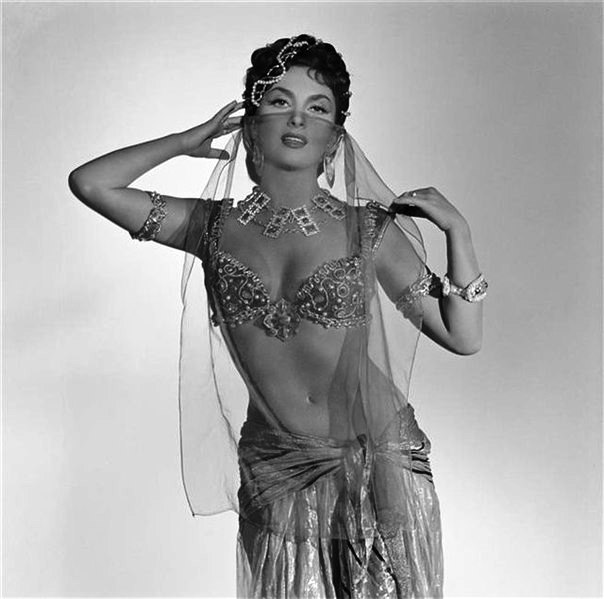 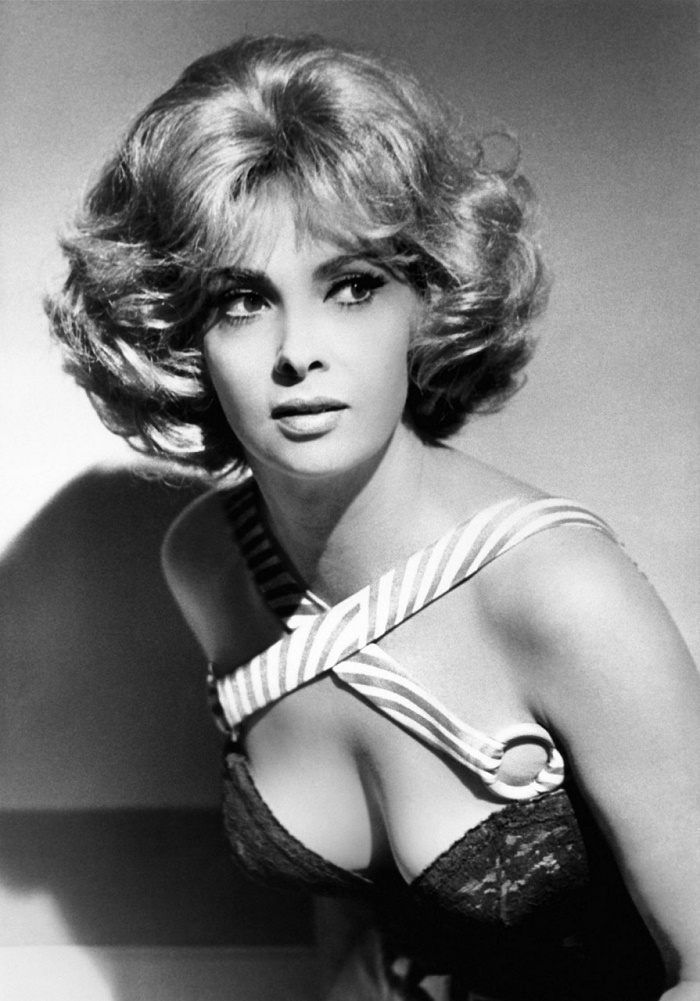 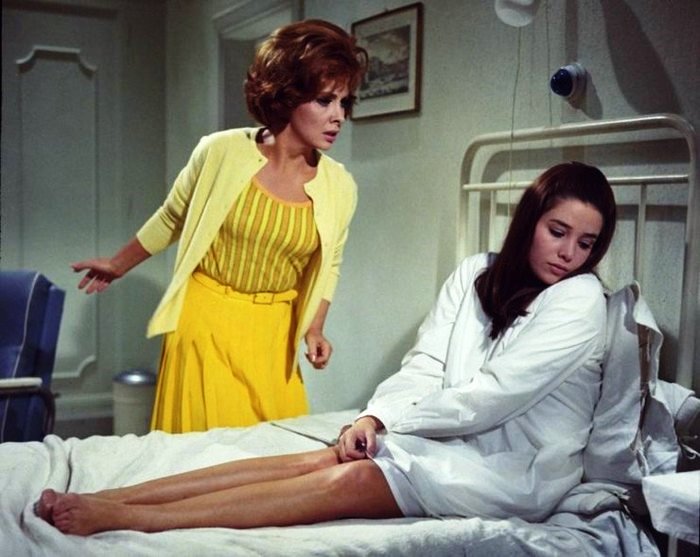 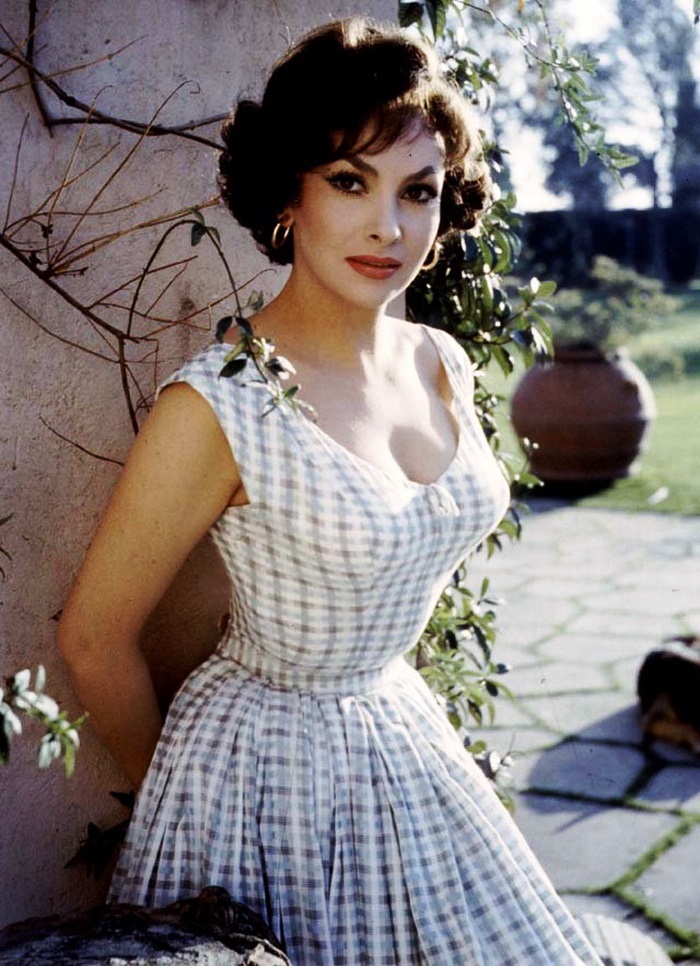 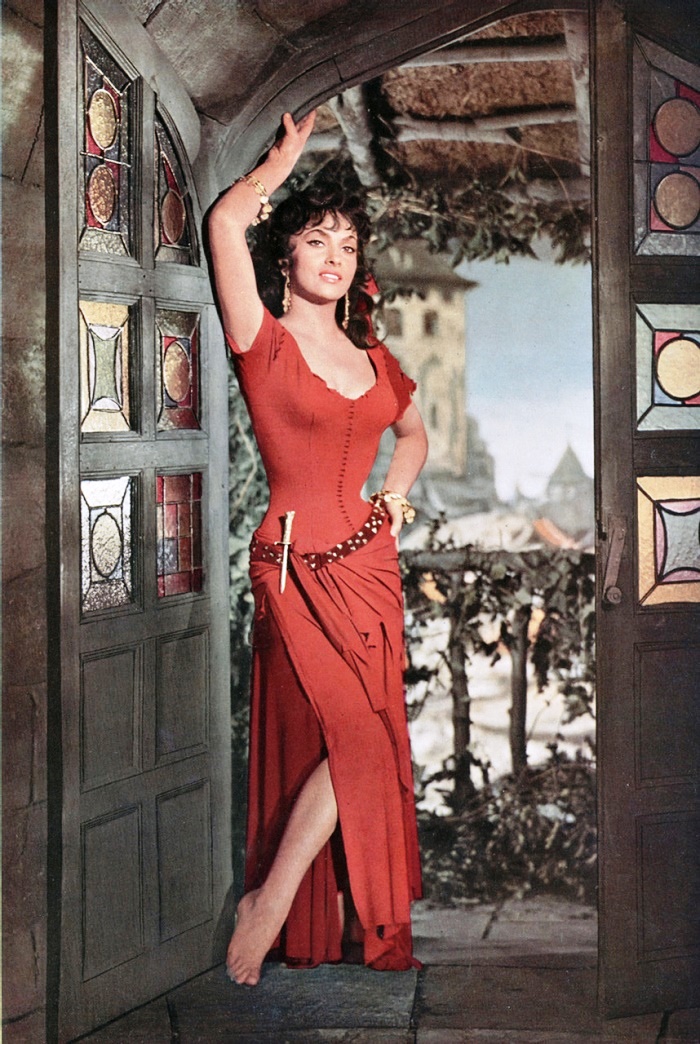 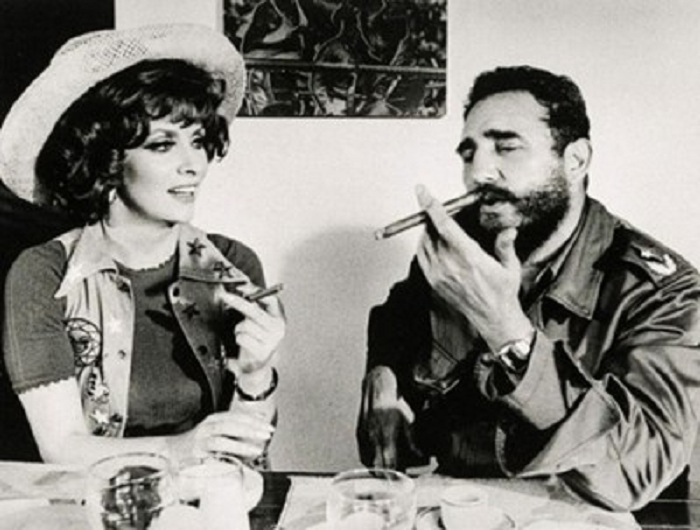 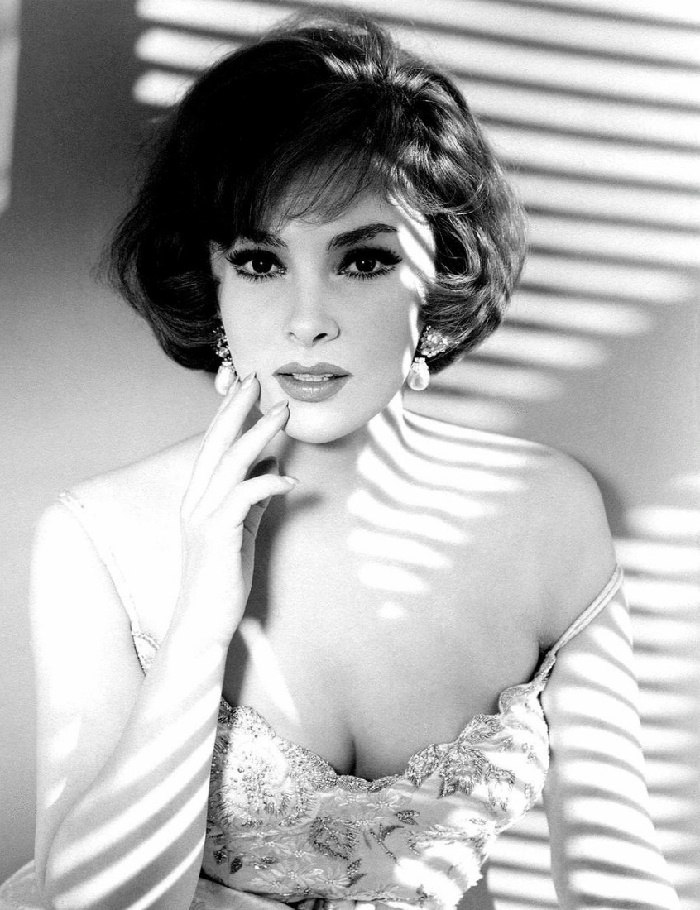 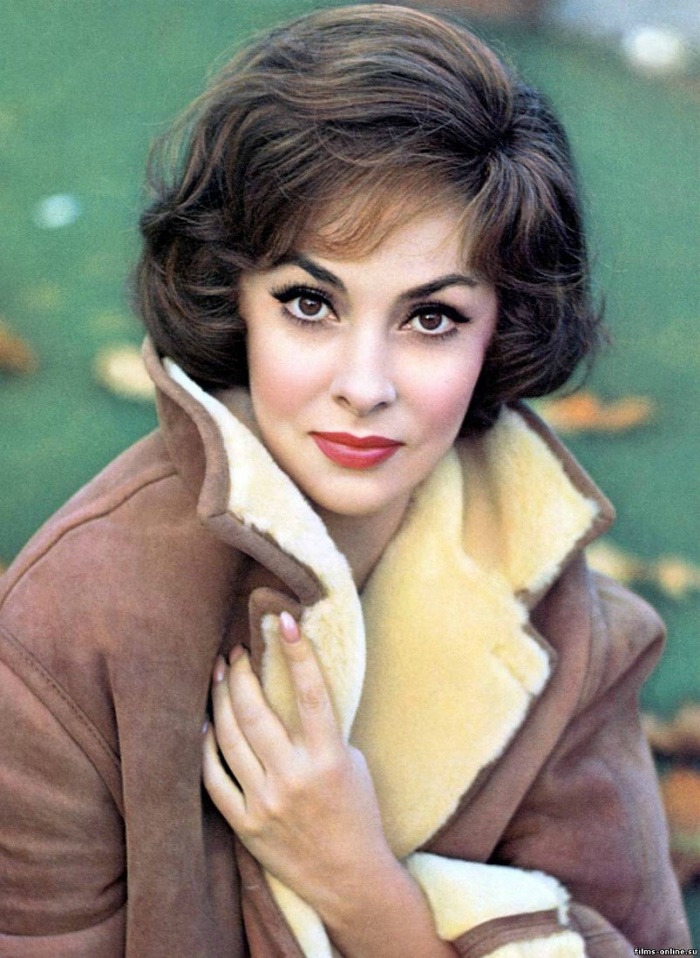 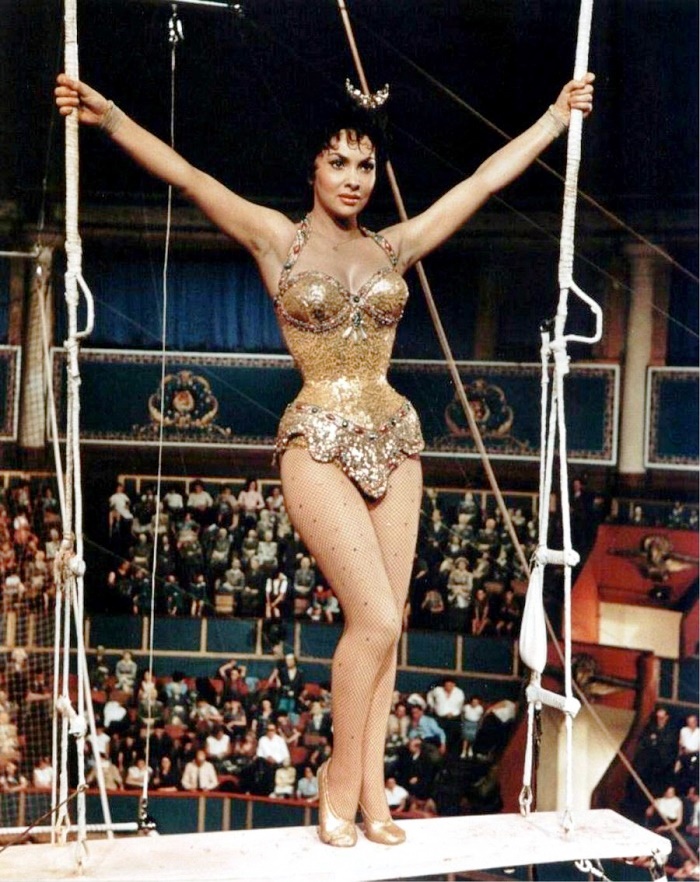 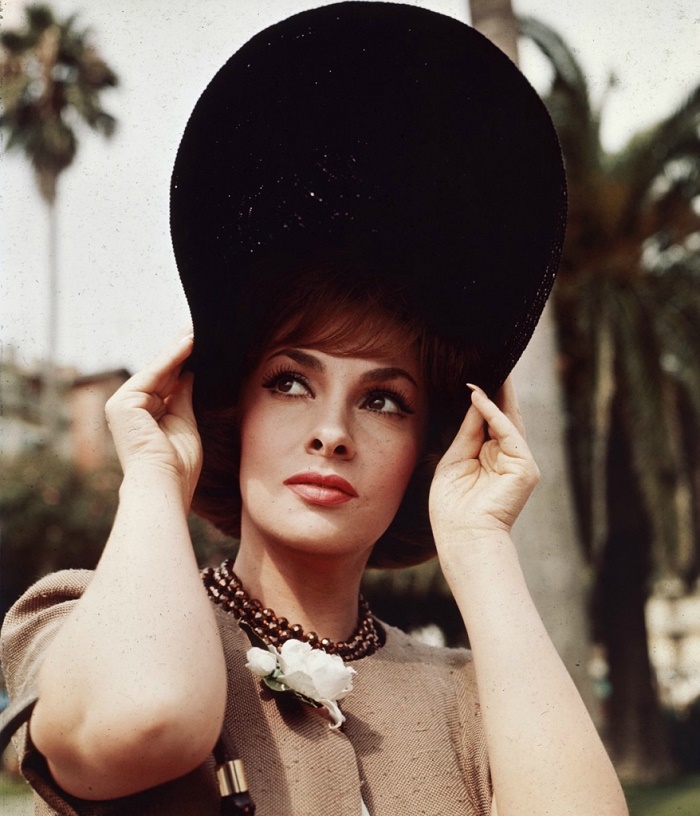 In a black hat 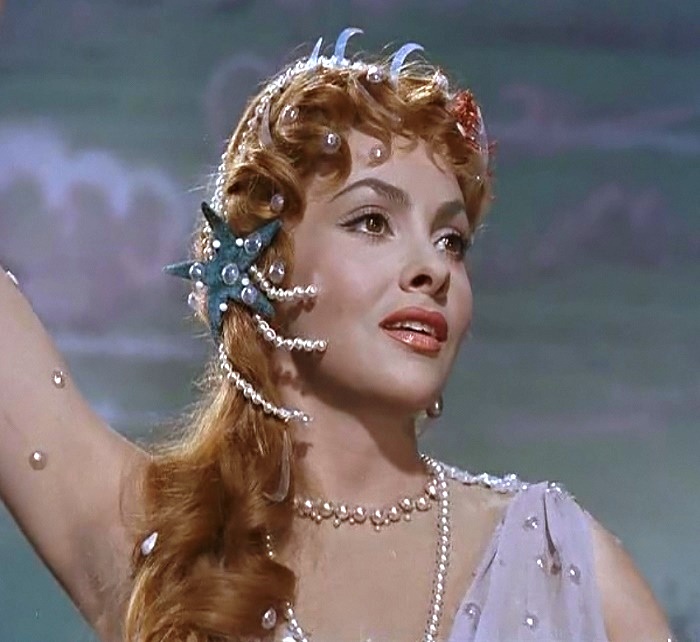 in the role of Lina Cavalieri in the film ‘The most beautiful woman in the world’ in 1955. (Here the actress is 28 years old) 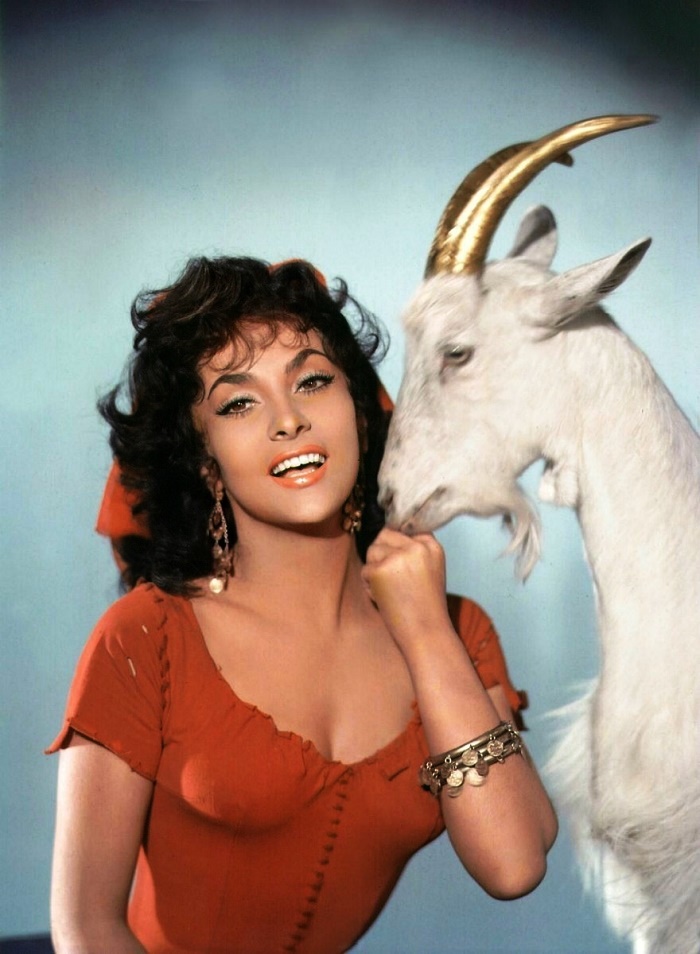 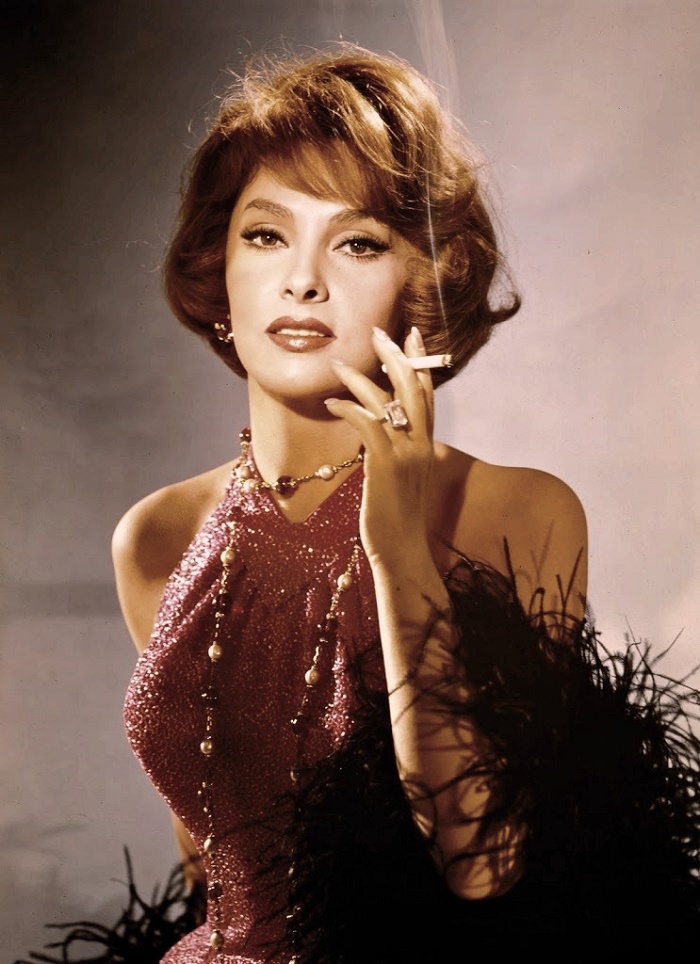 One of the most beautiful women in the world Gina Lollobrigida 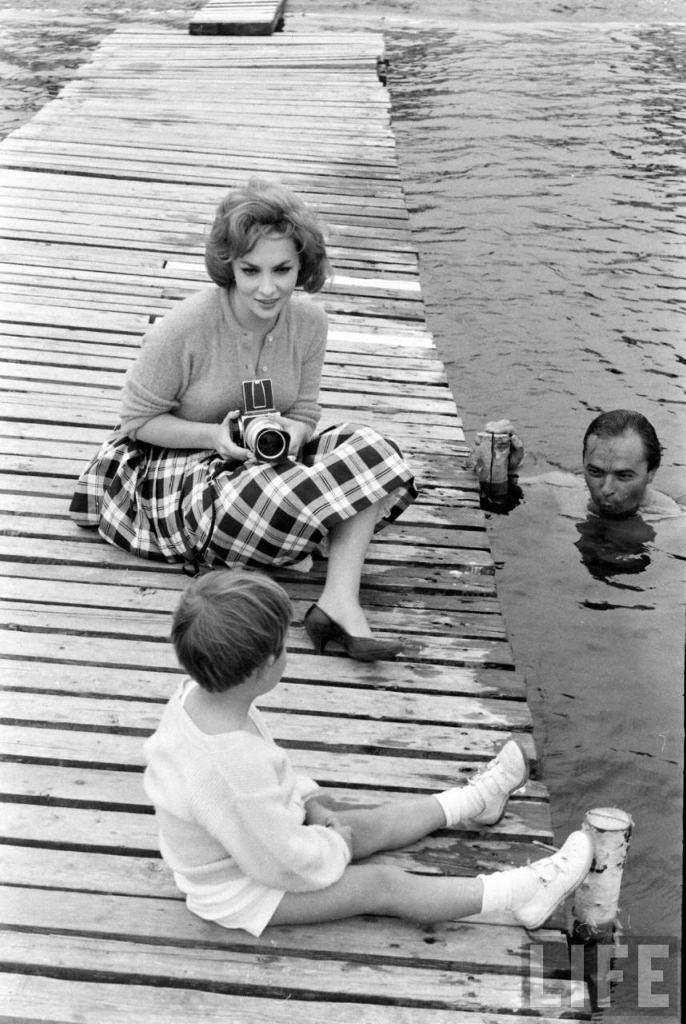 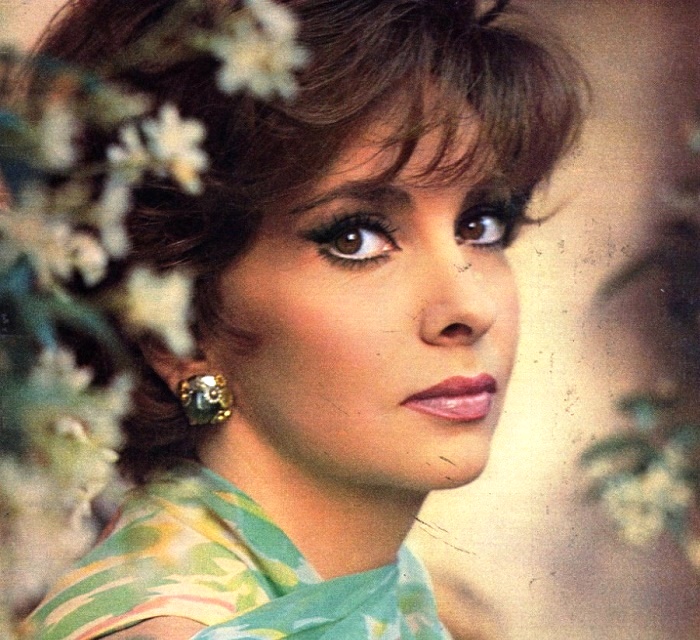 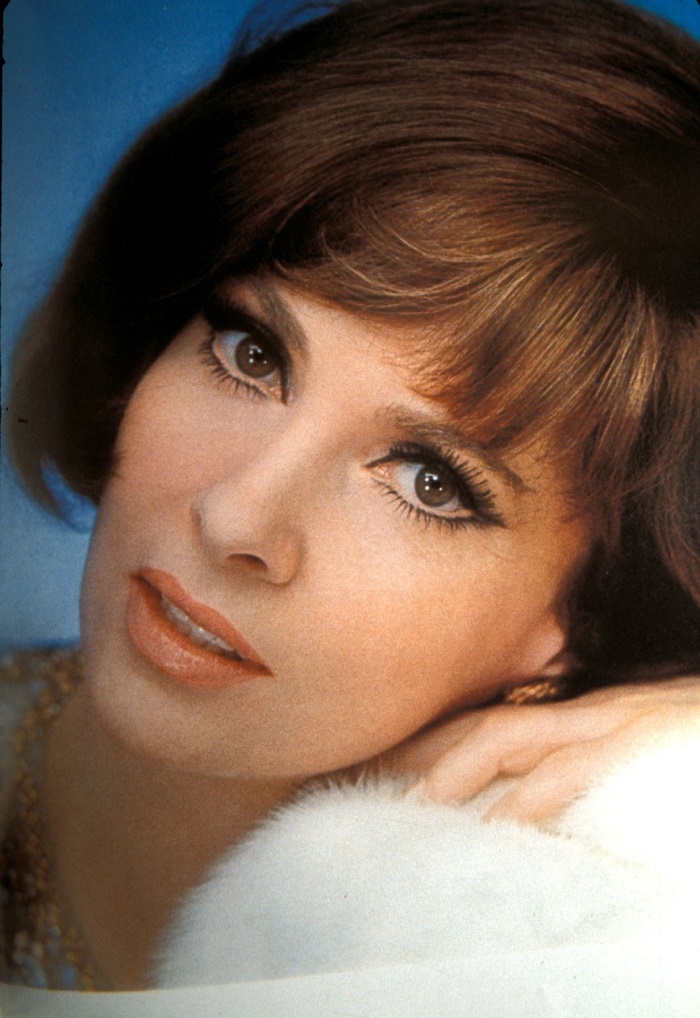 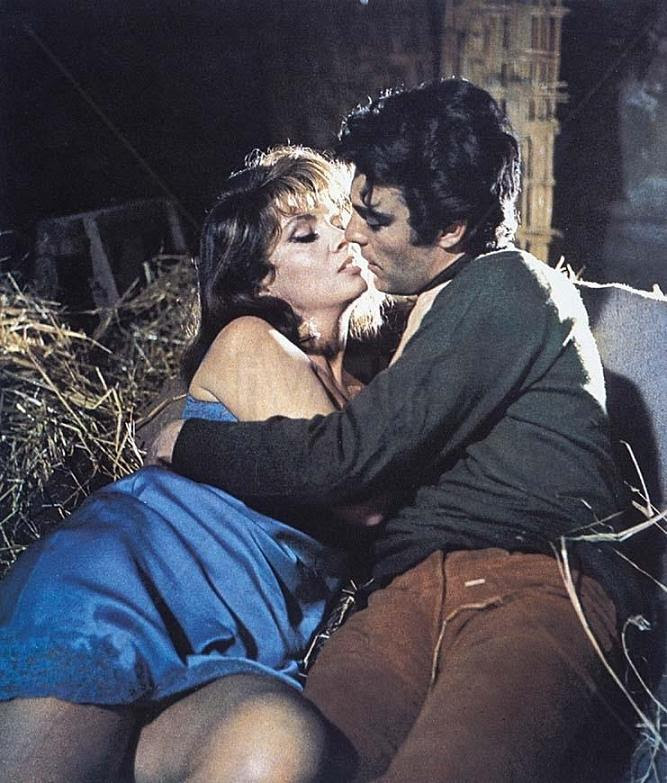 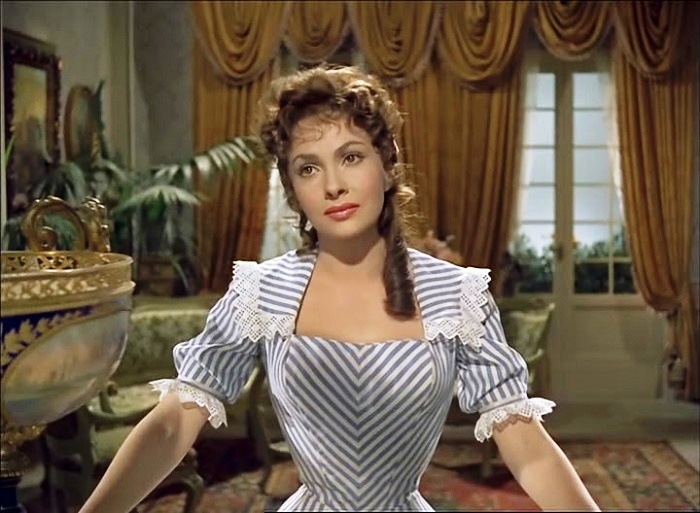 The World’s Most Beautiful Woman, 1955 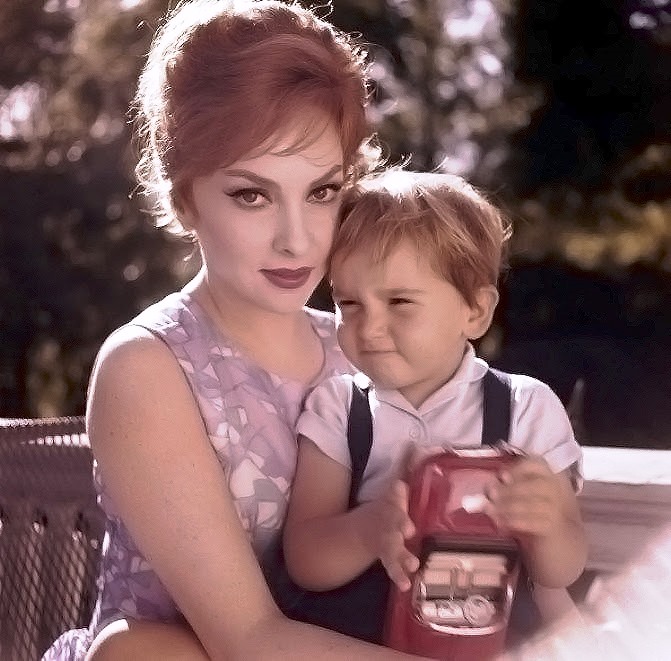