« Masterpiece of Verdura jewellery
Elegance and splendor of Loretta Young » 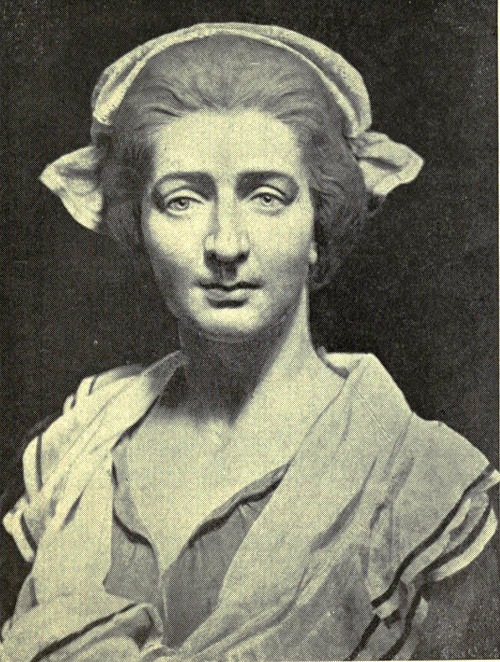 Madame Tussaud courageous and talented woman
Born in Strasbourg in 1761, Marie Grosskholts from childhood knew the fact that others are trying to stay away from her family. Her father Joseph came from a family of public executioners, later killed in the War just two months before the birth of Marie. In addition, Marie’s mother, Anna, didn’t have tender feelings to her sullen husband, who was nearly thirty years older than her. Meanwhile, her light in the window, her joy for many years was a very different man – a young handsome sculptor Philip Curtis.
Yet, it’s is still a mystery whose daughter was Marie – Curtis’s or Joseph’s. The official website of the Paris museum of wax figures says about this story: “Her father was a soldier and took part in the Seven Years’ War. He died two months before the birth of a girl without seeing her. Widowed mother worked as a housekeeper in the home of Dr. Philip Curtis, and later married him.” 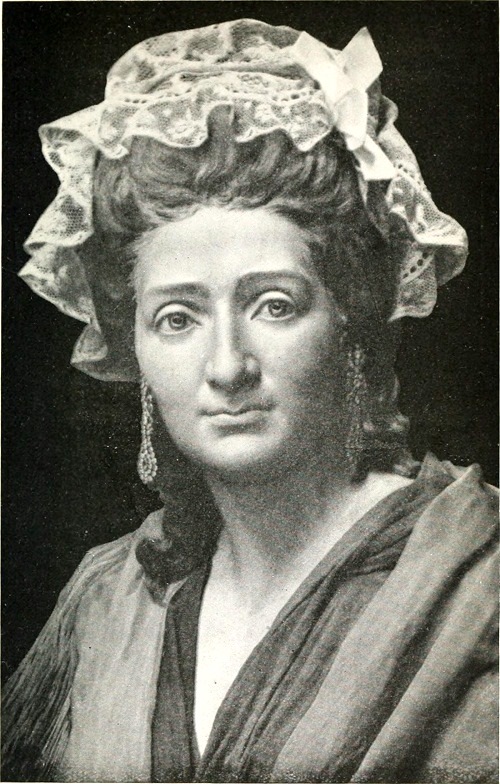 After a while they moved from Berne to Paris, where in 1770, Philip Curtis founded the Wax Museum. Unlike most of his fellows in the shop, he was not in poverty, because he was purveyor to the court of His Majesty the King of France – cast a wax image of the monarch, and his numerous children and family.

Marie did not shine with beauty, special grace of manners, but she was energetic, inquisitive child, struck all by her curiosity and diverse creative instincts. After several years of studying in an elementary school the girl was helping her father who was no longer cope with the flow of orders. Curtis taught her anatomy, the basis to develop modeling. Soon capable student produced her first wax figure: the statue of Voltaire and Franklin made by seventeen-year-old Marie. At the same time talented girl succeeded in painting, sewing and hair styling.

Her personality caused such interest among the French royal family that the young Mademoiselle Grosskholts was invited to the court to teach art skill to Louis XVI’s sister, Madame Elizabeth. Marie spent nine years in the luxury of Versailles. Her talented hands created more and more sculptures, which never ceased to amaze the court. Life seemed beautiful and cloudless, the future – even more brilliant.

But the French Revolution broke out, and court painter at once fell into the fatal lists of “accomplices of kings.” The palace rooms were replaced into a prison. They have already cut hair – all was ready for execution.

As for Marie, she would not have escaped the guillotine, if not her unique talent: revolutionaries let her go in exchange for a commitment to make masks of victims of the revolution. A young woman was prepared for a difficult test: carve death masks of those with whom she was side by side for many years, including masks of beheaded Louis and Marie Antoinette. Not only that, she had found their severed heads to the cemetery among the many bloodied remains of those who fell from the guillotine.

One day a stranger came to Mary and ordered to take all necessary for work, brought her into a strange house. In the upper room in a metal bath she saw the body of Marat, who was stabbed by royalist Charlotte Corday. Then while she was mechanically doing her job, absorbed in an unexpected new idea: it is possible to create not just a figure, but the whole story, and historical scenes! Soon there was a first work – “Marat and Charlotte.”

In 1794, Dr. Curtis died, bequeathing to the death of the entire collection of wax his 33-year-old daughter. Marie has inherited not only a collection, but also his business. Soon after she married a French engineer Francois Tussaud. This family had three children – sons, Joseph, Francois and her daughter, who died in infancy.

But the dream of a real family did not come true. A spouse was looking into the bottle and nights spent at the gambling table. Practically everything that earned Mary, he managed to empty into the card or to spend on riotous revelry.

Things were going well, Madame Tussauds – her name was on hearing from all of Paris. Josephine de Beauharnais, now Empress, invited her to the Tuileries, to fashion a sculpture of the head of Napoleon … The workshop was filled with wax figures of the artist in advance.

In 1802, after a drunken spree of her husband, she finally decided to leave him. Leaving the younger son in the care of her mother, along with her elder Joseph and her collection went on a tour to the British Isles.

Unpleasant surprises were waiting for her. In 1804, after a tour to Ireland, a cargo ship that was to get her figures to Liverpool, sank. After hearing this sad message the courageous woman started all over again! Fortunately molds were in another boat. Marie took the money for the purchase of material, and then in the morning until late at night, molded shapes, made costumes, modeled hair. So she recreated the entire collection, which consisted of a few dozen pieces, and added to it new characters.

The English appreciated the art of Marie. Richard the Lionheart, Mary Stuart and Mary Tudor, Oliver Cromwell – just some of the figures created by Madame Tussaud’s in a foreign land. This exhibition was met with the children’s delight in all the cities of Great Britain. The next season opened with new figures and scenes: Shakespeare and Walter Scott, Sir Nelson and a Little Lady – the future Queen Victoria …

Her case was continued by descendants: in 1884 the grandson of Mary, Joseph Randall Tussaud’s, put the wax figures in a museum near the famous Baker Street, where they now reside. Since then, the collection is kept up with the life of society, capturing both good and bad, and the sublime and the grotesque …

The point that Marie started in the eighteenth century, the twenty-first transformed into a vast empire of entertainment. Great-grandchildren continue the work of their great grandmother, opened a museum of her name in various countries and cities. 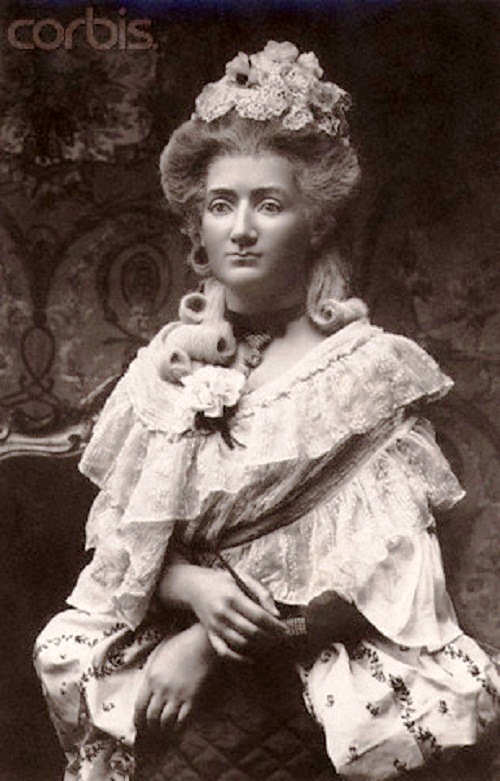 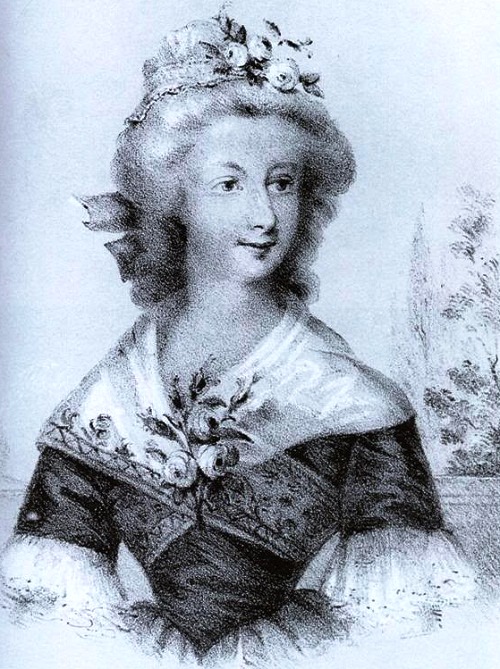 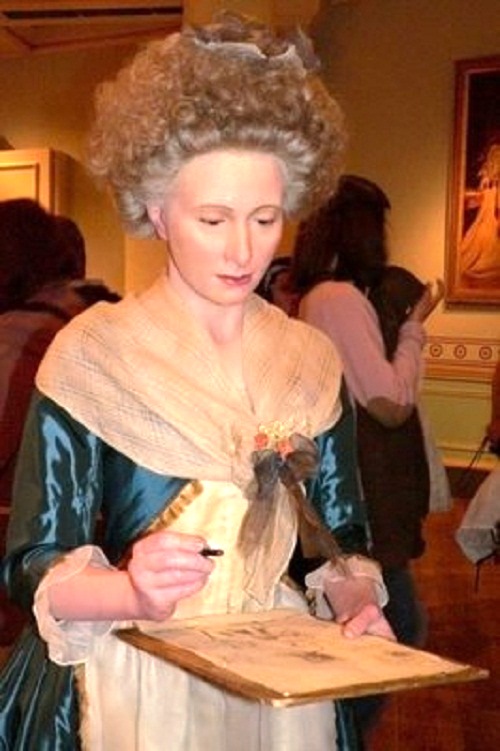 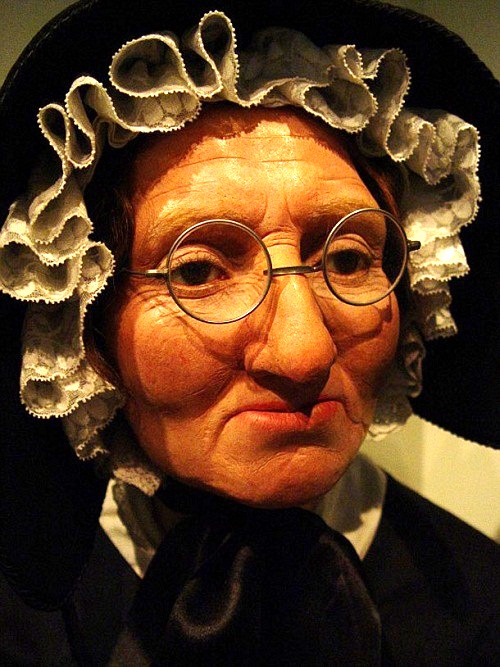 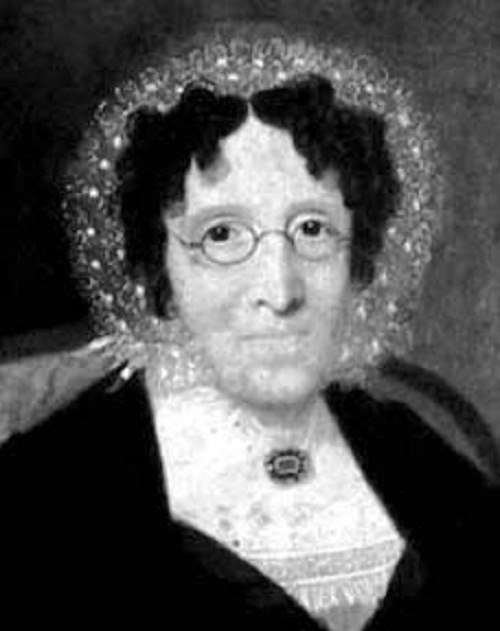 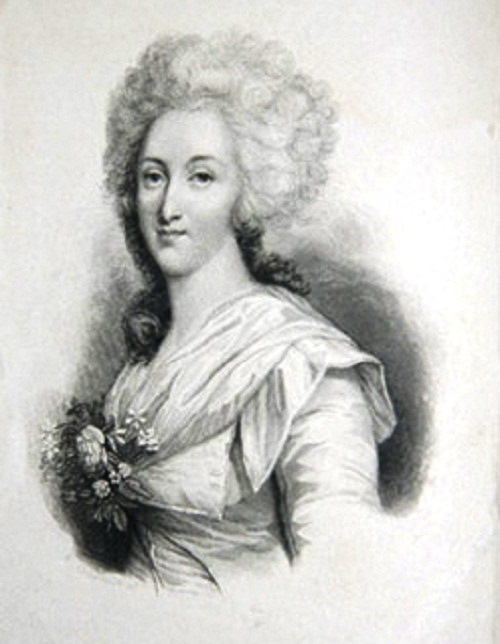 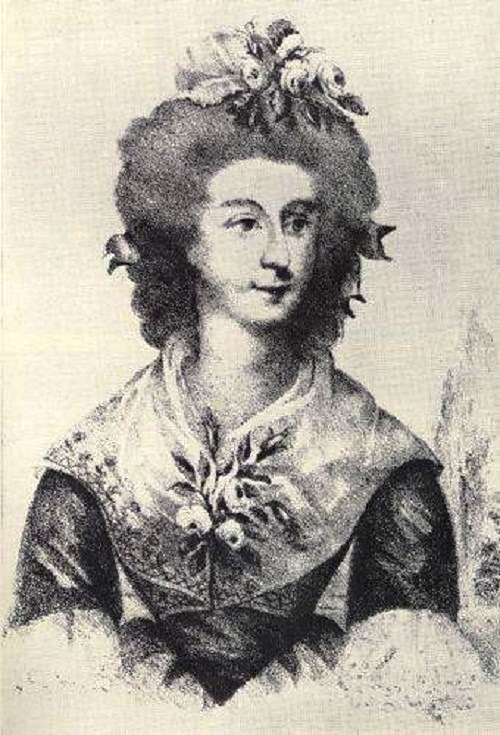 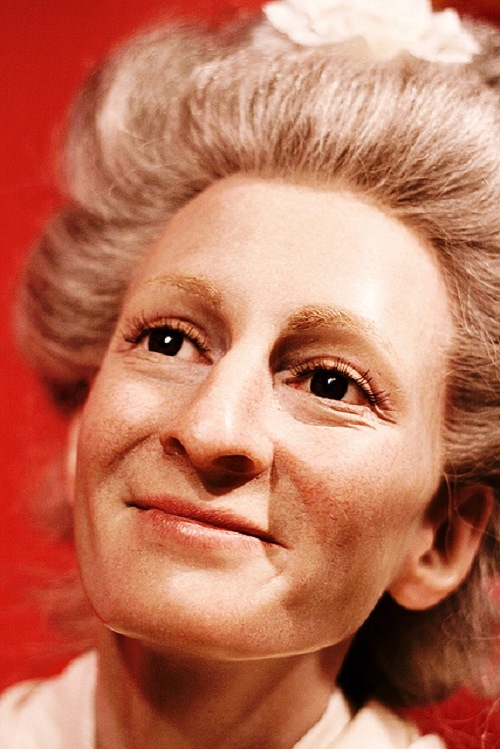 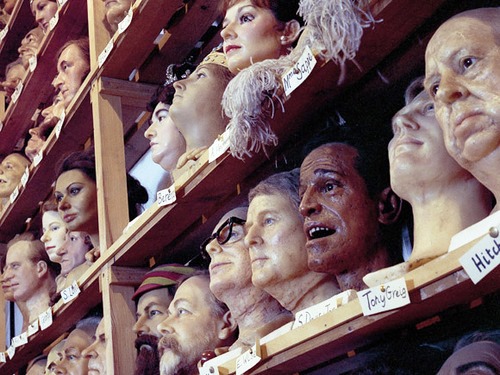 Various wax heads on the shelves 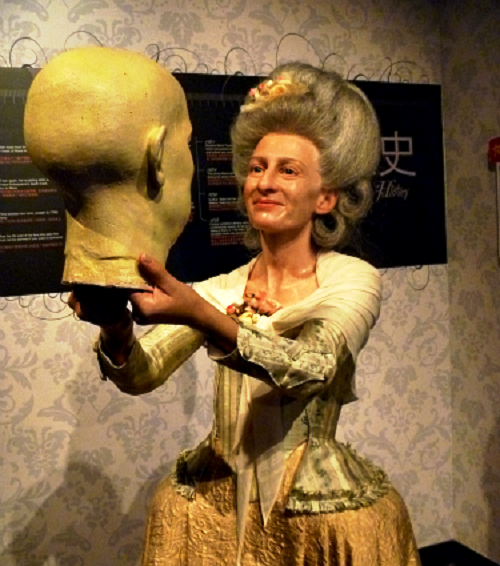 Creator with her model, wax figure 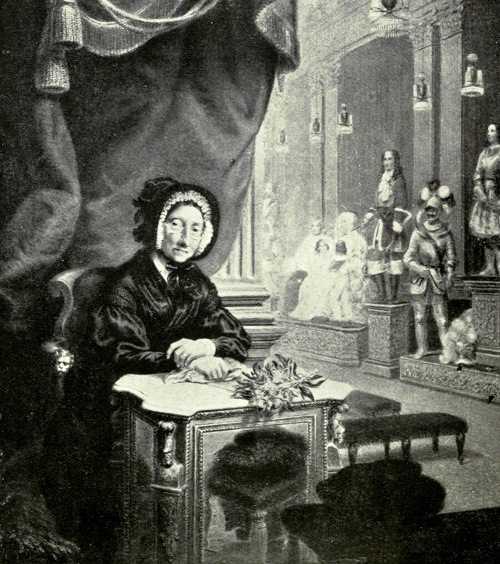 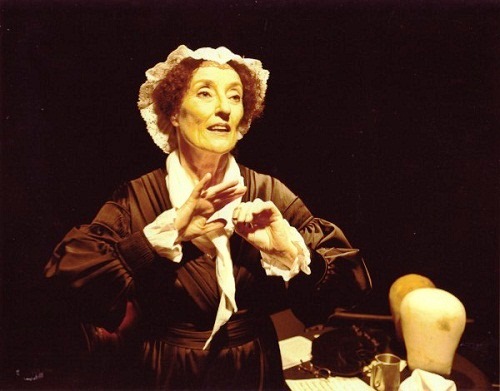 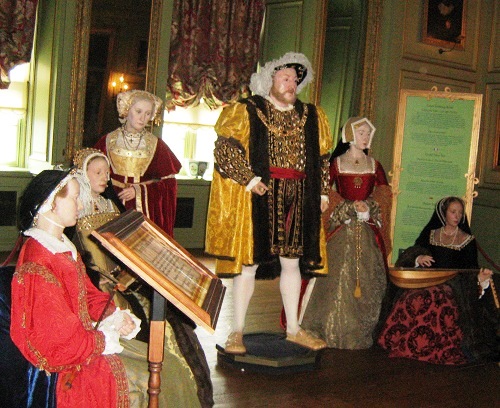 In the museum of wax figures 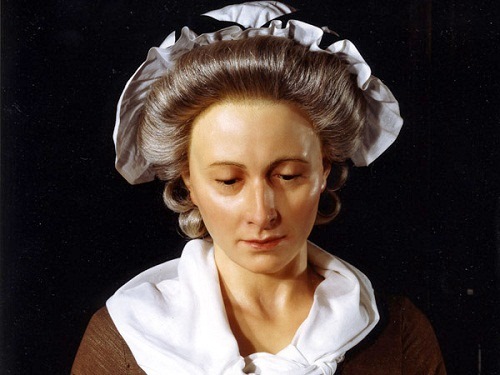