Medieval and Renaissance beauties in engravings 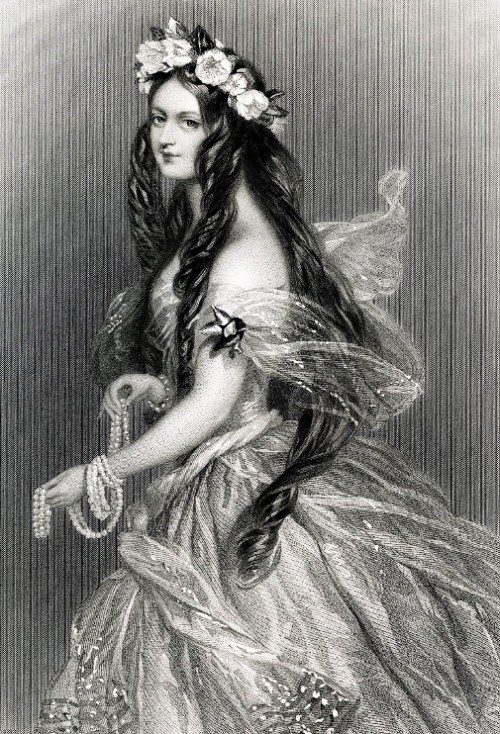 Medieval and Renaissance beauties in engravings is a gallery of British Queens. In the Medieval times children from royal and noble families were married at a young age. Usually girls were as young as 12 when they married, and boys as young as 14. The first recorded age-of-consent law dates back 800 years. In 1275, in England, Westminster 1 statute, made it a misdemeanor to “ravish” a “maiden within age,” whether with or without her consent. “Within age” was the age of marriage, which at the time was 12 years of age. There were authorities who claimed that consent could take place earlier. For many noble-born or royal women, marriage often took place at a young age. There are many instances or very young girls being betrothed and married under the age of 10 years old.

Matilda of Scotland was Queen of England as the first wife of King Henry I. Since the age of 12 the Scottish princess was much sought-after as a bride; refusing proposals from William de Warenne, 2nd Earl of Surrey, and Alan Rufus, Lord of Richmond. Hériman of Tournai claimed that William II Rufus considered marrying her. Matilda had spent most of her life in a convent, there was some controversy over whether she was a nun and thus canonically ineligible for marriage. Matilda and Henry were married on 11 November 1100 at Westminster Abbey. 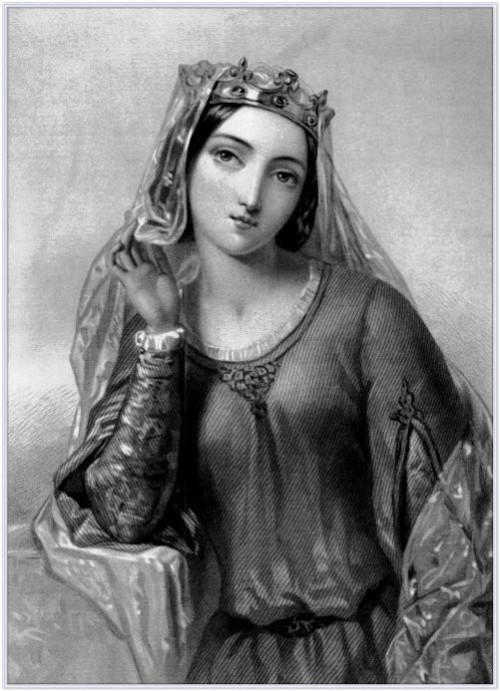 Medieval and Renaissance beauties in engravings. Isabella of Angouleme (1188 – 4 June 1246)

Isabella was queen consort of England, reigning Countess of Angouleme from 1202 until 1246. Her marriage to King John took place on 24 August 1200, she was 12 years old. She had five children by the king. In 1220, Isabella married Hugh X of Lusignan, by whom she had another nine children.

Philippa was the Queen consort of King Edward III of England. The marriage was celebrated on 24 January 1328. Philippa was 14 years-old. She had given birth to fourteen children.

Isabella was Queen consort of England, the second spouse of King Richard II. Her parents were King Charles VI of France and Isabeau of Bavaria. On 29 June 1406, 17-year-old Isabella married her cousin Charles, Duke of Orleans. She died in childbirth at the age of 19, leaving one daughter

Catherine was Queen consort of England from 1420 until 1422. Catherine was said to be very attractive and when Henry V met her, he became enamored. Catherine and Henry were married at the Parish Church of St John or at Troyes Cathedral on 2 June 1420. He was 34, she was 19. Catherine died on 3 January 1437, after childbirth.

Elizabeth was Queen consort of England as the spouse of King Edward IV from 1464 until his death in 1483. In 1452, Elizabeth Woodville married Sir John Grey of Groby. She was 15, he was 20. Elizabeth was called “the most beautiful woman in the Island of Britain” with “heavy-lidded eyes like those of a dragon”, suggesting an unusual criterion by which beauty in late medieval England was judged.

Elizabeth was queen consort of England from 1486 until 1503. Henry and Elizabeth married on 18 January 1486. Their first son, Arthur, was born on 20 September 1486. Elizabeth was crowned queen on 25 November 1487. The marriage proved successful and both partners appear to have cared for each other. Elizabeth died on 11 February, her 37th birthday.

Catherine was Queen of England (1509-1533), the first wife of King Henry VIII and previously Princess of Wales as the wife of Prince Arthur. Prince Arthur and Catherine of Aragon were married on 14 November 1501, at Old St. Paul’s Cathedral. Catherine was 16, Arthur Tudor was 15. Arthur died suddenly on 2 April 1502, at the early age of 15.

Anne Boleyn was Queen of England from 1533 to 1536 as the second wife of King Henry VIII. Henry and Anne went through a secret wedding service. She soon became pregnant, and there was a second wedding service in London on 25 January 1533. Henry was 42, Anne was 32. On 2 May 1536, Anne was arrested, on the morning of Friday 19 May, Anne Boleyn was judicially executed. The executioner Rombaud was so taken by Anne that he was shaken. Rombaud found it so difficult to proceed that to distract her and for her to position her head correctly, he is said to have shouted, “Where is my sword?” just before killing her. A number of people have claimed to have seen Anne’s ghost at Hever Castle, Blickling Hall, Salle Church, Tower of London, and Marwell Hall. In 1960, Canon W. S. Pakenham-Walsh, vicar of Sulgrave, Northamptonshire, reported having conversations with Anne.

Elizabeth was queen regnant of England and Ireland from 17 November 1558 until her death. From the start of Elizabeth’s reign, it was expected that she would marry and the question arose to whom. She never did, although she received many offers for her hand; the reasons for this are not clear.

Catherine was queen of England as the last of the six wives of King Henry VIII of England, whom she married on 12 July 1543. Catherine married four times. Her first marriage with Sir Edward Burgh was in 1529, when she was seventeen. She died in September 1548, probably of complications of childbirth.

Henrietta Maria was queen consort of England, Scotland, and Ireland as the wife of King Charles I. She was mother of two monarchs, Charles II and James II, and grandmother of three: Mary II, William III and Anne. Henrietta Maria and Charles I of England were married on 13 June 1625, she was 15, he was 25.

Medieval and Renaissance beauties in engravings

Caroline, known as Caroline of Ansbach, was queen of Great Britain as the wife of King George II. An intelligent and attractive woman, Caroline was much sought-after as a bride. On 22 August 1705, Caroline and George Augustus were married in the palace chapel at Herrenhausen.

Anne was Queen of England, Scotland and Ireland. The wedding of Anne and George of Denmark took place on 28 July 1683 in the Chapel Royal. Though it was an arranged marriage, they were faithful and devoted partners. She continued to reign as Queen of Great Britain and Ireland until her death. Despite seventeen pregnancies by her husband, Prince George of Denmark, she died without any surviving children and was the last monarch of the House of Stuart.

Queen Victoria was the monarch of the United Kingdom of Great Britain and Ireland from 20 June 1837 until her death. Prince Albert and Victoria felt mutual affection and the Queen proposed to him on 15 October 1839. They were married on 10 February 1840, in the Chapel Royal of St. James’s Palace, London. Their nine children married into royal and noble families across the continent, tying them together and earning her the nickname “the grandmother of Europe”.