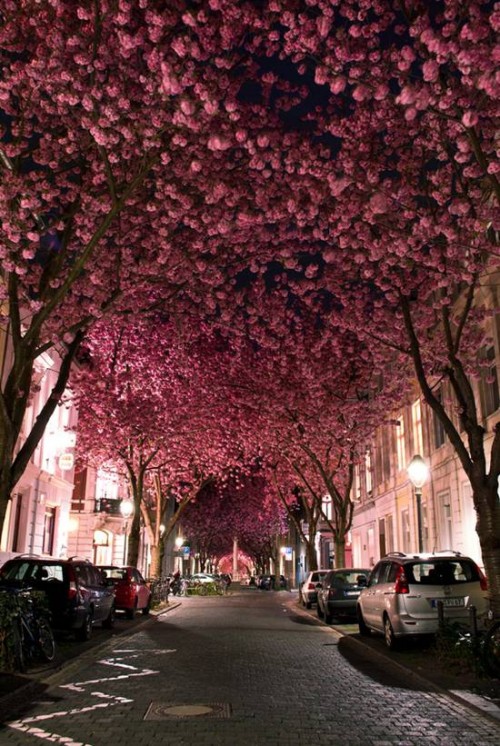 Most beautiful tunnels in the world.
Tunnel of cherry trees is located in Bonn, Germany, it is definitely worth visiting. Flowering Cherry blossoms create amazing pink archway for 7-10 days, depending on the weather. Many of us, especially those in large cities, sorely lacking of the life of nature. Therefore, it is extremely pleasant to stroll in the fabulous living corridor of twisted trees, whether it is a street in the center of the bustling city, the park or forest. Let’s look at the top ten most beautiful tunnels of trees from around the world. Some of them are created naturally, others – with the participation of men, but they are all equally beautiful.

Under the arch of the hundred giant trees Tipuana (or «Rosewood»), which is in this street of Porto Alegre, you can spend the whole day. In 2006, Mayor Jose Fogasa declared it the historical, cultural and environmental heritage of Brazil. 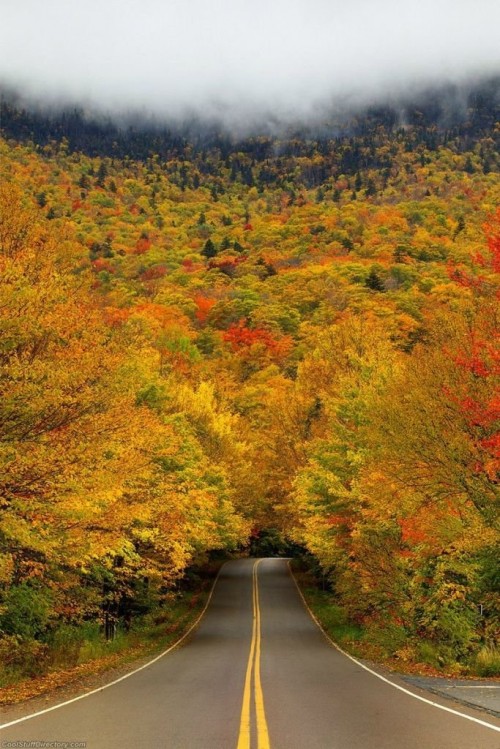 Tunnel of autumn trees, USA. These trees in a park in Vermont «Smugglers Gulch», literally glow with all the colors of autumn. «Presentation» begins at a northern section and gradually moves south for the season 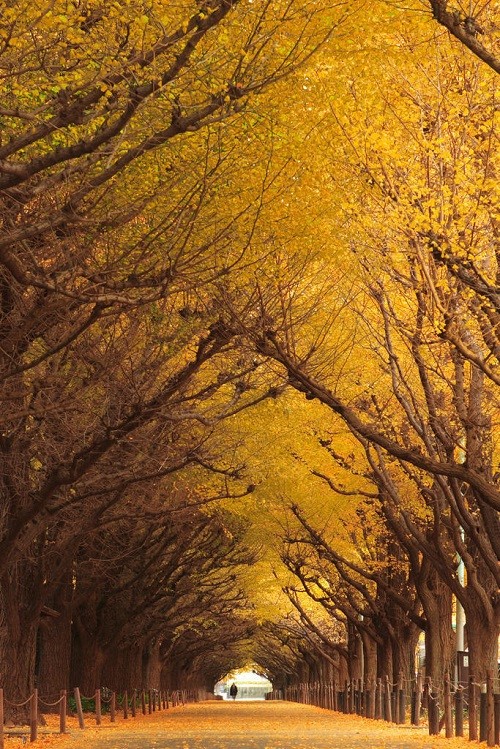 Gingko Biloba trees — one of the most revered in Japan. Some of these trees suffered atomic bombing of Hiroshima. They are called a «symbol of hope» or «living fossils.» 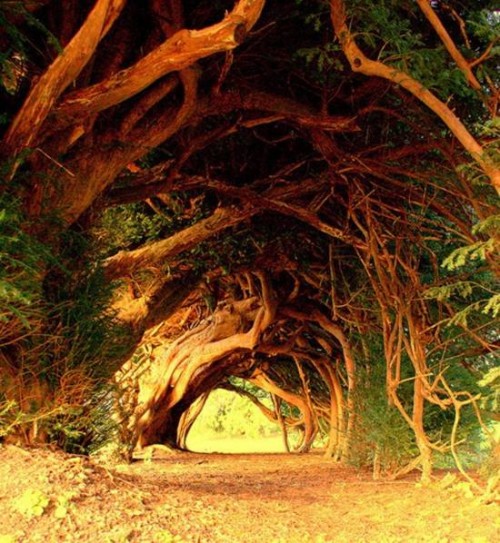 Yew tunnel in Wales has inspired writers from 1470. Medieval House Aberglasney, in the garden of which the tunnel is now, has become the popular tourist destination. However, the previously abandoned tunnel was nearly destroyed. To restore this natural corridor took 9 years 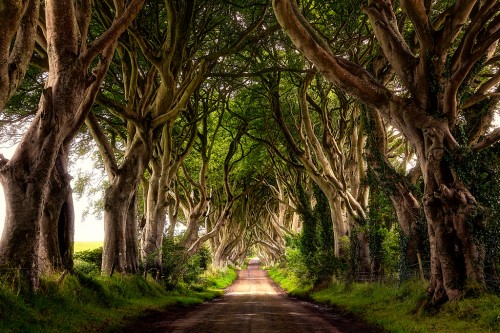 This mysterious tunnel as if descended from the book cover. James Stewart planted trees back in the 18th century to make an impression on his guests at the entrance to his house Gracehill. There is also a legend about a «Grey Lady» — ghost maid in the tunnel, who lived in a nearby house and died under mysterious circumstances. 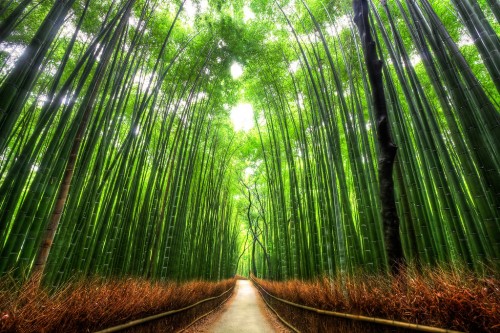 Bamboo passage, Japan. This tunnel is located in the bamboo forest Sagano in the historical terrain Arashiyama. Ministry of Culture of Japan announced Arashiyama «a place of of the picturesque landscape.» Not far from this forests are also located known temples and tombs. In Japan it is considered necessary to store the sound of wind, swinging high in bamboo trees 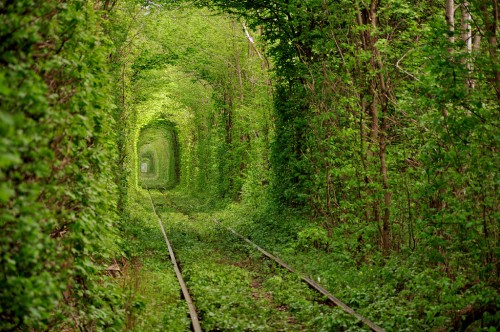 According to legend, couples have to drive through the tunnel and make a wish. If their love is strong and pure — the desire will come true. The tunnel is the site of a private railway, used as woodworking plant, located near the town of Klevan in western Ukraine. The train passes here three times a day 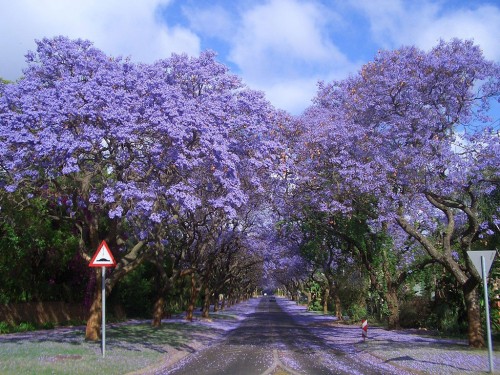 If you love the purple color — this tunnel is for you. This man-made forest of more than 10 million trees is in Johannesburg. Tropical trees, including 49 species of jacaranda (rosewood), brought to South Africa Uruguay, Brazil, Peru and Argentina. In October, when the trees are in bloom, the ground is covered with blue and violet petals. 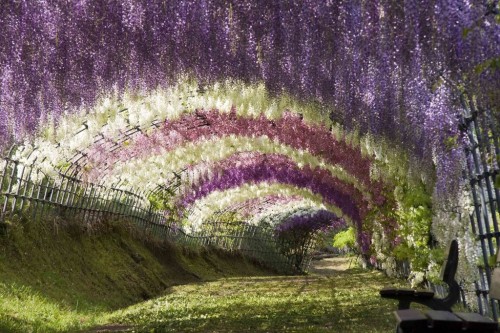 Walking through this tunnel of wisteria can feel like a royalty. Wisteria flowers hanging in clusters like grapes, begin to bloom as soon wither cherries. Each spring, the Japanese celebrate Fuji Matsuura (or Festival of wisteria) in Tokyo, and Sidzouke Okazaki. The park Ashikaga can simultaneously show the greatest number of colorful species of wisteria. 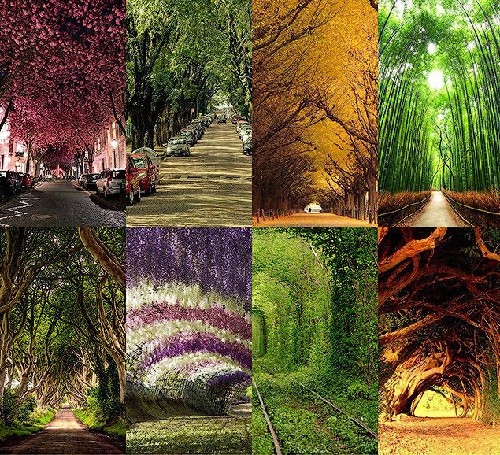 Most beautiful tunnels of trees