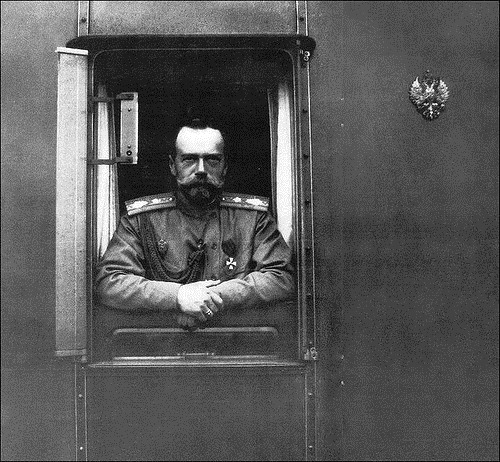 Russian Emperors train
First built at the Alexander factory in St. Petersburg (1836-1837), the train’s first passenger, traveling from Moscow to Bologoe was Emperor Nicholas I. On the opening day, in October 1837, Nicholas I arrived personally at the Tsarskoye Selo Railway. The first part of the railway consisted of a locomotive with a tender and 8 cars. Nicholas I always traveled in a separate eight-coupe car of 1st class. Perhaps it was in the first period after the opening of the road, but it was recorded that later emperor with his family and entourage traveled only in “special train” (imperial carriages and trains did not yet exist). 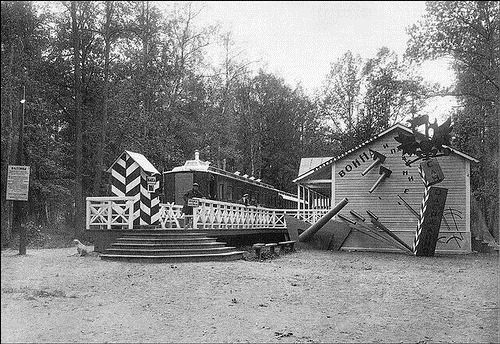 At the end of the reign of Nicholas I, in 1851, completed the construction of a railway from St. Petersburg to Moscow. Since the beginning the Russian tsar paid a lot of attention to railway and became its first passenger, traveling from Moscow to Bologoe in a prepared for him a special train.

The train consisted of a locomotive, car, saloon car, kitchen, car-bedchamber, dining-car, caboose and the suite carriages. Connected by covered walkways, some of these cars were built in the years 1850-1851 at the St. Petersburg Alexander factory. The length of the train, including a locomotive with tender, was about 80 meters.

Noteworthy, the break-luxury train appeared a little earlier – in the early morning 18 August 1851 Nicholas I went by it from St. Petersburg to Moscow to celebrate the 25th anniversary of his coronation.

The length of the imperial carriage was 25.25 meters, set on two four-carts. That was new and unusual even for the beginning of the XX century, since then railway carriages had twenty meters length. At the ends of the car were capacious entrance areas with fencing.

The car looked beautiful – painted in blue on the outside with gilded double-headed eagles over ten windows.

During the reign of Alexander II, rail transport grew increasingly, and became a part of the life of the country. In addition, new lines appeared – Petersburg – Warsaw (1862), Moscow – Ryazan (1864), the Riga-Orel (1866-1868), Moscow – Kursk (1868) and several others. Royal travel by rail increased, requiring improved comfort. 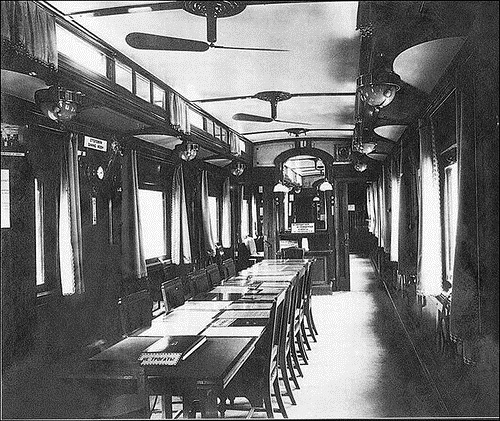 A dining room in the restaurant car

Reconstructed many times, by 1902 the train consisted of 10 cars. Some of them – intended for the Emperor, his family and suite. A kitchen, a luggage compartment and a compartment for servants were in the other cars. Later, they added one more car to the train, used as a church.

In fact, trains intended as palaces on wheels. They, along with the luxury and amenities for travelers provided a smooth ride and a proper level of security. Meanwhile, to determine the number of people accompanying the Emperor in his trips abroad, security compiled a list of passengers. As a result, the composition of the royal train included 11-12 cars, weighing about 400 tons.

As for Nicholas II, until 1905 he used trains, built on the orders of his father – Alexander III. But as Nicholas II often traveled around the country, then gradually each rail formed his royal train. By 1903, the park of the imperial train had five compositions.

First, for Dowager Empress Maria Feodorovna with cars on four-carts. The composition included 10 cars.
Second, “His Imperial Majesty” for long-distance travel in Russia, commissioned in 1897, at the four-carts.
Third, the Imperial train “for foreign track”, which appeared in 1894, consisted of 11 cars on the four-carts.
Fourth, the “Imperial shuttle train” with the three-axle wagons to travel in the vicinity of St. Petersburg, which included 13 cars.
Fifth, the Imperial train of Kursk railway for “foreign and local nobility” of the 16 three-axle wagons. 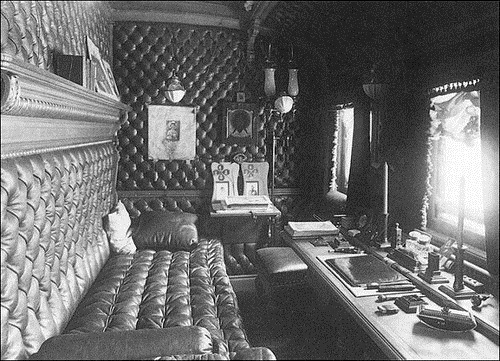 Most often Nicholas II used the Imperial train during the First World War. The Imperial train was small. The bedroom and the office of the Emperor were side by side, on the one hand – the suite, on the other – the car-dining room. Then came the kitchen with pantry, the car with the military camp office and the last car, which housed railroad engineer and head of the road on which the train followed. 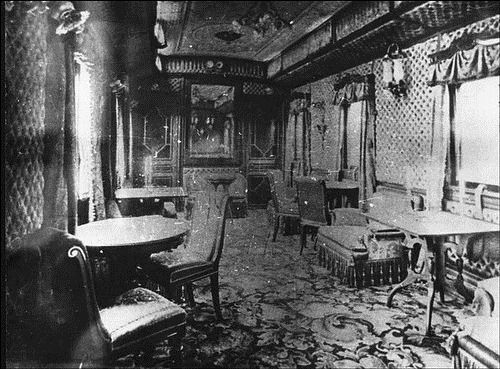 A dining room in the restaurant car

Coming to the front headquarters, the Emperor stayed in his train. When in the summer of 1915, Nicholas II was assumed the duties of the Supreme Commander, and most of the time he began to spend in Mogilev, then there he was often visited by the Empress and daughters.

In fact, in the years 1915-1917 the imperial train was one of the permanent residence of the last Russian emperor. The train and the car was part of area in which the March 2, 1917 Nicholas II signed his abdication.

The fate of all the royal luxury cars was sad. Most of them were lost in the fire of the Civil War. The surviving cars were destroyed in 1941, and today in Russia there is no any of the original imperial train. 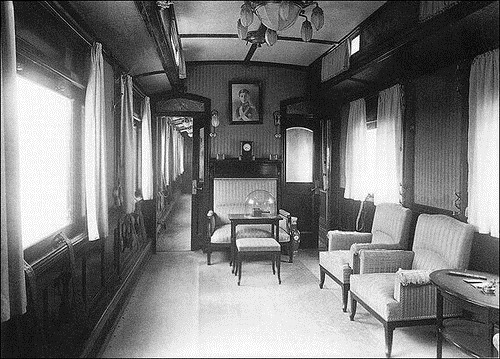 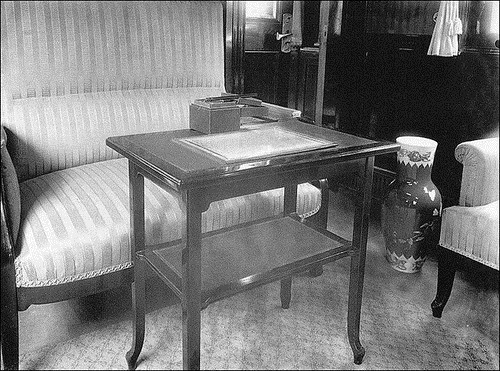 A table with an inkstand. Russian Emperors train 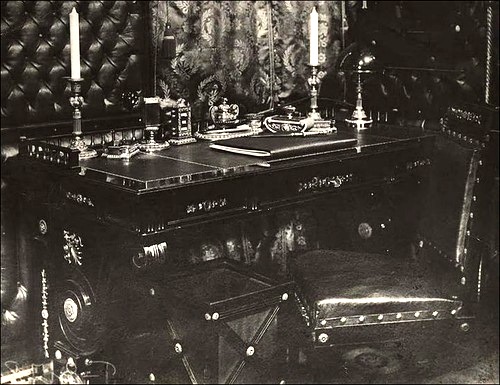 A writing desk of the Empress. Russian Emperors train 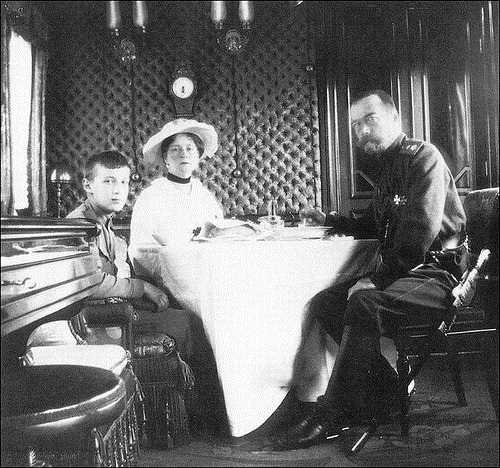 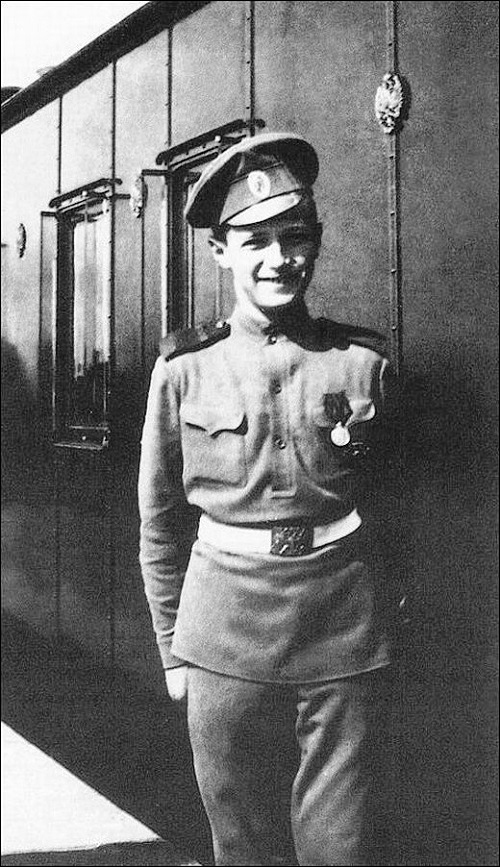 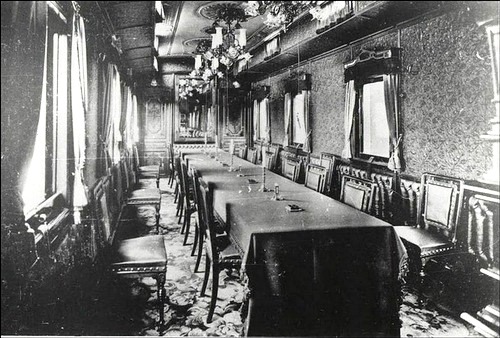 The cars painted in dark blue and decorated with gilding looked beautiful. Detail of interior of Russian Emperors train 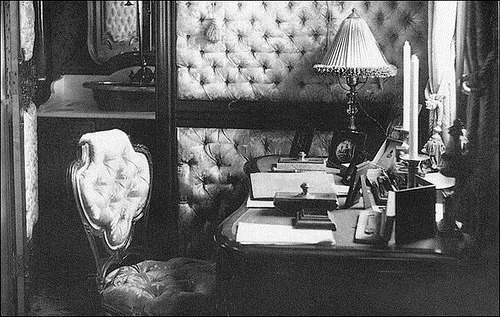 The compartment of Nicholas II 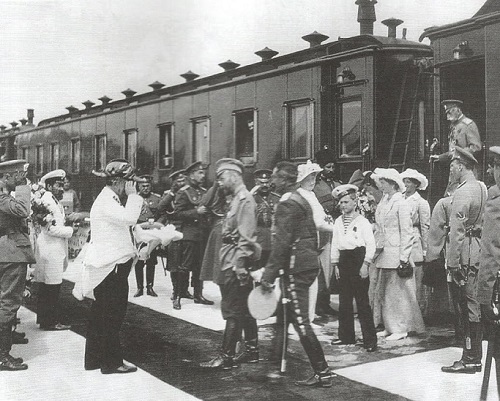 The train and the car was part of area in which the March 2, 1917 Nicholas II signed his abdication