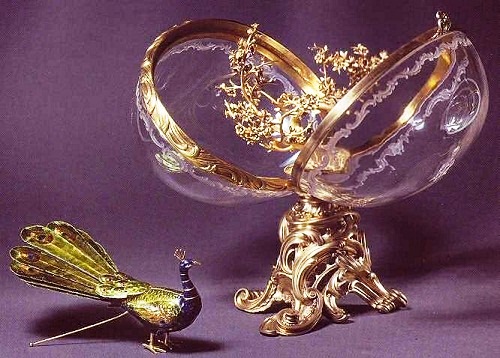 Carl Faberge Easter eggs
In fact, Peacock is brand of courtly jewelry firm of Carl Faberge. Made in 1908. With regard to the master – the manufacturer of the egg, according to some sources, Henry Wigstrom, to others – Dorofeev. The egg made of gilded silver, diamonds, emeralds, sapphires, rhinestone and enamel. Dimensions 15.2 cm. Inspired by the famous clock-peacock in the Hermitage. Surprise inside the egg – the peacock – a mechanical bird, sitting on a branch inside the egg. Springs of gold, studded with precious stones. Peacock is removable. If you wind it up and put on a flat surface, it begins to swagger, sedately stepping legs. Also, it can turn the head and from time to time dissolve its tail. According to belief, Dorofeeved performed this part of the work.
Donated by the Emperor to his mother the Dowager Empress Maria Feodorovna on Easter 1908. The egg is in the private collection of the heirs of Maurice Sindoza in Lausanne, Switzerland. 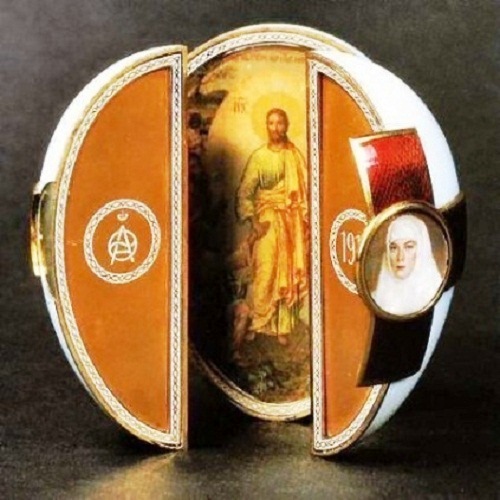 Modest “Red Cross and the triptych “Sunday” egg, with less jewelry, only frame made of gold, apparently because of the wartime economy. In the closed form in the center of the crosses – the portraits of the Grand Duchesses Olga and Tatiana. The central part of the triptych – painting “The Descent into Hell.” Christ surrounded by prophets and patriarchs stands above the doors to hell, he just broke. He holds Adami’s right hand. “Descent into Hell” in the Russian Orthodox Church has traditionally a symbol of Resurrection. On the left side of the triptych Princess Olga of Russia. On the right side – St. Tatiana. The egg was in a box, was made transparent later. Given on Easter in 1915 by Emperor Alexandra. Stored in the egg collection of Minshall, Lozanna, Switzerland. 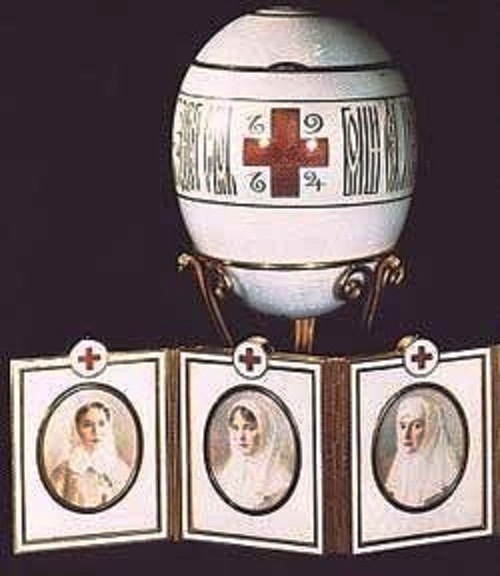 White egg with a red cross

White egg with a red cross. Manufactured by imperial jeweler Carl Faberge in 1915. Size – 8 of 8 cm master jeweler – Henry Vingstrem. Materials – gold-plated silver, gold, pearl and enamel. The egg is framed with gold edging and gold was on the stand. Surprise eggs – 5-panel screen with miniature portraits of women of the imperial family in the forms of the sisters of Mercy of the Red Cross. The egg was presented to the Emperor’s mother Empress Maria Feodorovna. Stored in the Museum of Fine Arts, Lillian Pratt collection. State – Virginia, USA. 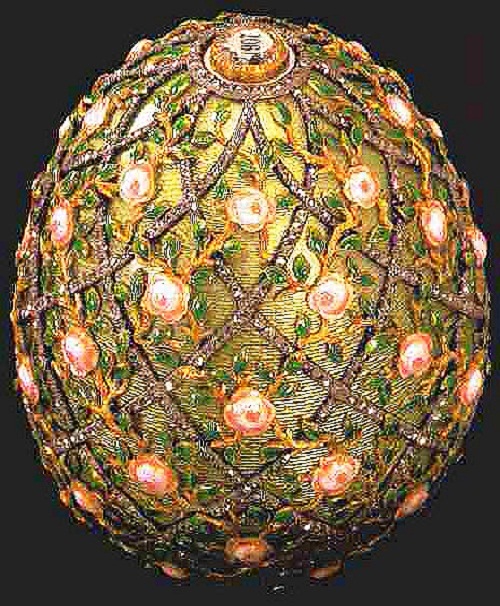 “Bars and roses” egg. Made by jeweler Carl Faberge firm in 1907. Master – jeweler Henry Wigstrom. Materials – gold, yellow, green and pink enamel and diamonds. Dimensions – 7.7 cm. Surprise unknown and lost. There is speculation that it was a medallion with a portrait of the Tsarevich Alexei. Tapes, Entangling egg in a grid, covered with small diamonds. Presented by emperor Nicholas II, to his wife Empress Alexandra Feodorovna. Kept in the Walters Art Gallery, Baltimore, USA. 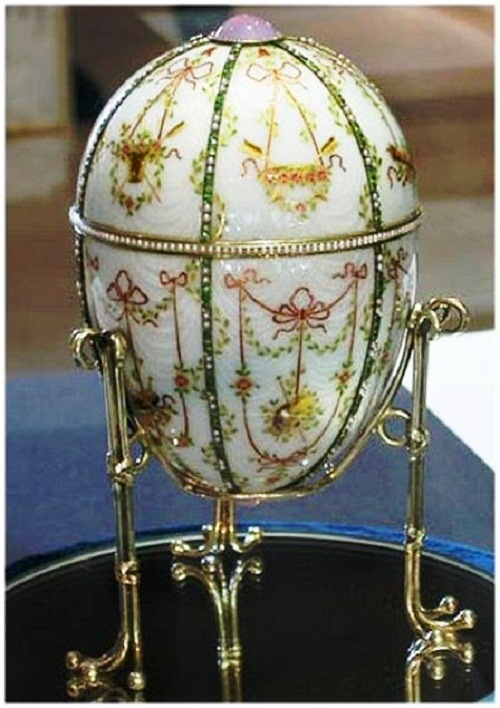 Candy-box egg. Made for the jewelry firm of Carl Faberge in 1903

Candy-box egg. Made by the jewelry firm of Carl Faberge in 1903. This egg – one of the seven eggs owned by Kelha. These products were ordered by Russian businessman Alexander Kelh as a gift to his wife. Jeweler Faberge master Michael Perkhin. Gifts ceased after 1904 to 1905, when the couple officially began to live separately and their financial situation has deteriorated due to the collapse of the Russian-Japanese war. The egg is in a private collection, probably in Australia.

The Widow (Pelican). The work of the company court jeweler – Carl Faberge. Master – Jeweler – Michael Perkhin. Materials – gold, opaque white enamel, diamonds, ivory and pearls. Dimensions: 10.2 cm inside the egg as a surprise is 7-panel folding screen with a thumbnail representing the charitable institutions of Maria Feodorovna. Pelican – a symbol of charity. Given by Emperor Nicholas II to his mother the Dowager Empress Maria Feodorovna. Stored in the Museum of Fine Arts in Virginia, Richmond, USA, a collection of Lillian T. Pratt. 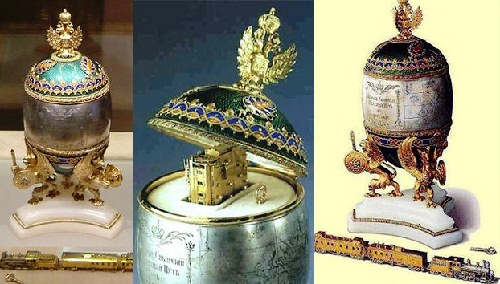 In the golden egg – embedded with platinum working model train, consisting of a locomotive and five carriages. In the first engraved inscription: “Direct SIBERIAN mail”. On the second, third and fourth – “For the Ladies,” “Smoking”, “NON SMOKING”, the second – “2nd CR.”, “24 places”, the third and fourth – “1st CR.”, “18 seats”. The fifth car intended for the church. The mechanism of the model starts with a golden key. This Easter egg – a typical example of a commemorative gift items created by the firm in honor of an important historical event – the construction of the Trans-Siberian Railway. Inspired by Tsar Alexander III and continued in the reign of Nicholas II. The road connected the European and Asian parts of Russia, the largest industrial city with a naval port of Vladivostok, which gave rise to the intensive development of the vast Siberian margin. Nicholas II presented it to Empress Alexandra for Easter in 1900. Came from the People’s Commissariat of the Monetary Fund in 1927. Preserved in the State Museums of the Moscow Kremlin. 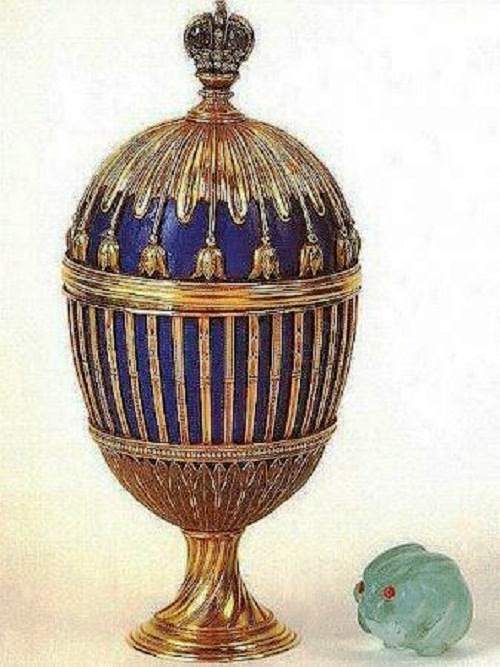 Egg with strips of blue enamel

Egg with strips of blue enamel. Made probably in 1885-1891, the imperial jeweler Carl Faberge firm. Master jeweler – Michael Perkhin. Size – 11 cm is made of green, red and yellow gold, sapphires, diamonds, agate, ruby. Inside the egg is agate figure of a rabbit with ruby eyes. Who was the first owner of the egg – unknown, but presumably it was meant to Empress Maria Fedorovna. This time the egg is in a private collection of Stavros Niarchos, Paris. 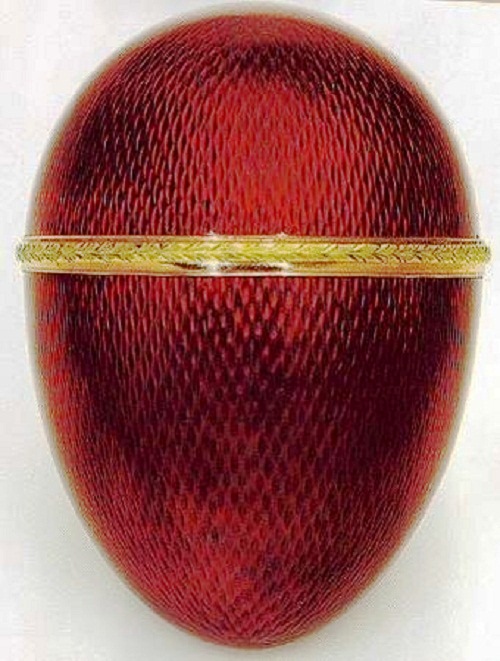 Scandinavian egg, made in the imperial court of Faberge firm in 1899 -1903 by Master jeweler Michael Perkhin. Repeats the type of eggs, “Hen.” Stored in Vekselberg’s Egg collection