« Christmas with vintage actresses
Beautiful actresses passed away in 2013 » 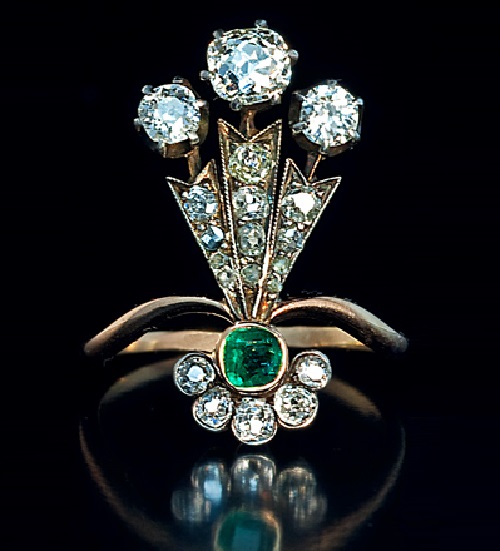 Russian Imperial jewelry is characterized by its artistic beauty, exquisite craftsmanship and historical importance. It belongs to the Tsarists period, predominantly made during the reign of Tsar Nicholas II (1894-1917). Countless sparkling gems for centuries were the brightest “business card” of the Russian imperial court. Because for centuries Imperial Court was the largest customer of jewellery, it has greatly contributed to the formation of a galaxy of talented jewelers at the turn of XIX – early XX centuries, who began to determine trends in the world of fashion jewelry. 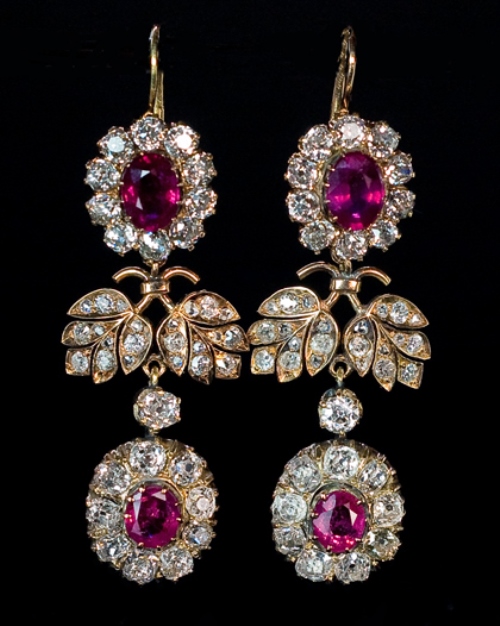 Russian Imperial jewelry. A Pair of Magnificent Imperial Era Antique Russian Double Cluster Dangle Earrings. These ruby and diamond long earrings were made in St. Petersburg between 1908 and 1917

The political crisis that led to the fall of the autocracy in 1917, interrupted the development of these positive trends of Russia as the world “jewelry box”, negating the position won by Russian jewelers in the world jewellery market.

The leading jewelers of the Russian Empire were largely dependent on the political situation. During the Soviet period the history of formation and development of the leading jewelry companies in Russia, tightly connected with the Russian imperial court, fell into the category of “shallow themes”.

In the post-Soviet period, the situation has changed dramatically. For several reasons, “monarchical theme” was in demand in all its diversity. The work devoted to the Russian jewelry art of XVIII – early XX centuries was a highlight. In this context, there was a rebirth of the brand Faberge in Russia again. This also contributed to the ever-growing lots at auctions Christie’s and Sotheby’s.

Currently, this topic has been actively developed. Of special value are the works, based on archival documents, much of which haven’t been claimed by researchers to date. Today jewelry treasures of the Russian imperial court can be seen on the websites of various museums. Here in Russia, the largest public collection of jewelry stores in the Diamond room and Treasure Gallery of the Hermitage and the Kremlin Armory with its famous historic hall of the Diamond Fund. It would seem that all have been “laid out on the shelves” … But life continues to throw up surprises. One of those last minute gifts for art historians has became a jewelry treasure (2168 items) found March 27, 2012 in St. Petersburg during the restoration of the Naryshkins mansion, at Tchaikovsky Street 29. 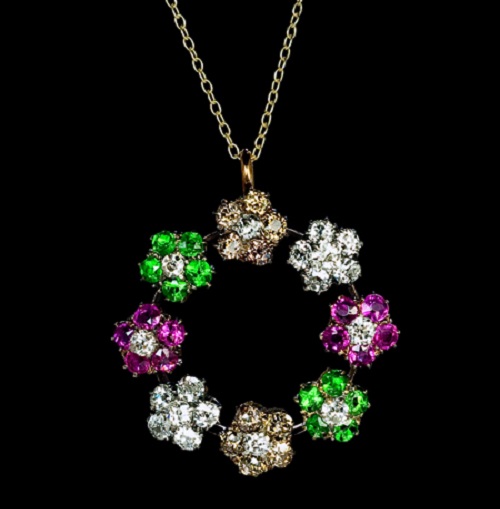 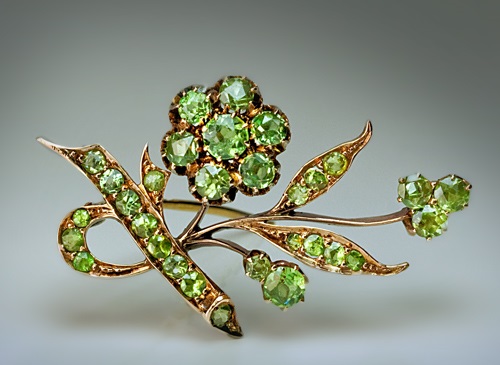 An Art Nouveau Antique Demantoid and Gold Brooch Pin. Made in Kazan between 1899 and 1908 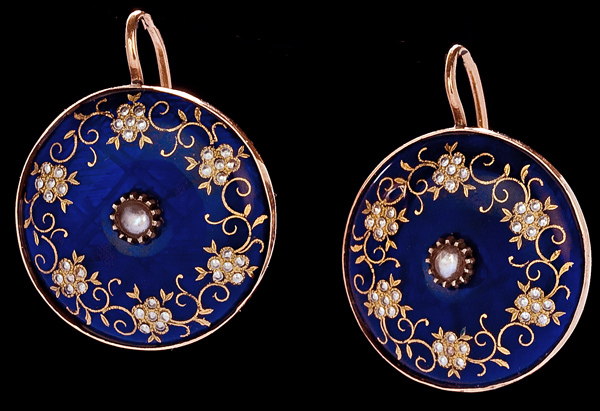 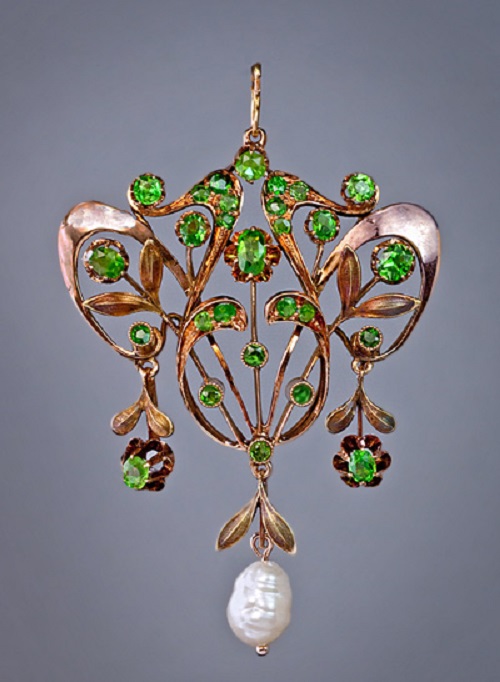 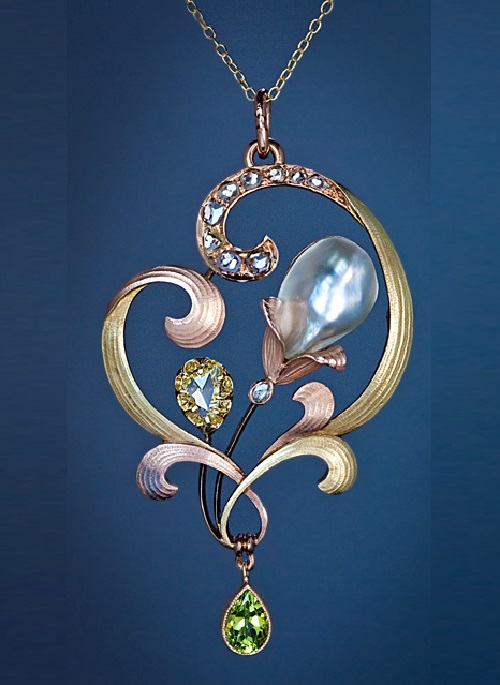 An Elegant Art Nouveau Jeweled Gold Pendant. Made in the city of Odessa between 1899 and 1908 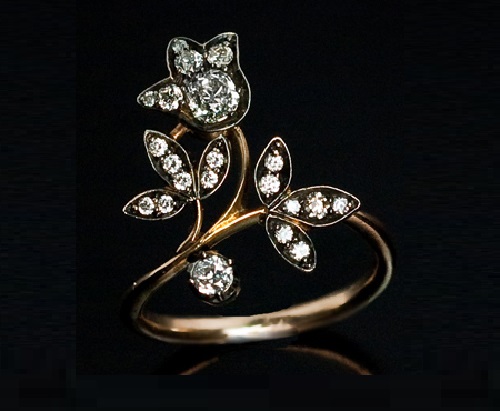 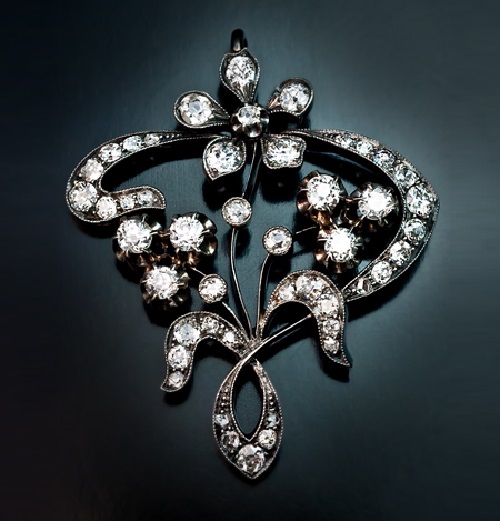 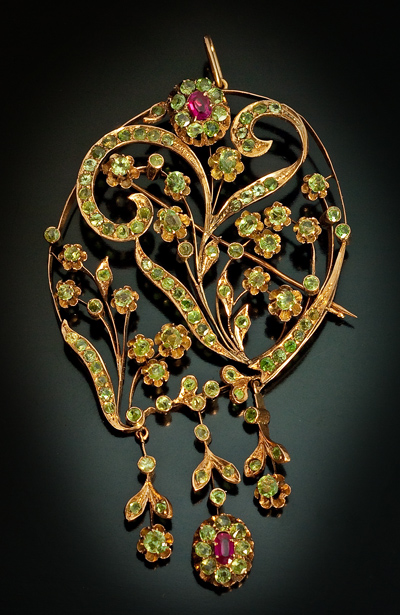 Rose gold, pale green demantoid garnet and synthetic ruby brooch-pendant. Made in Moscow between 1908 and 1917 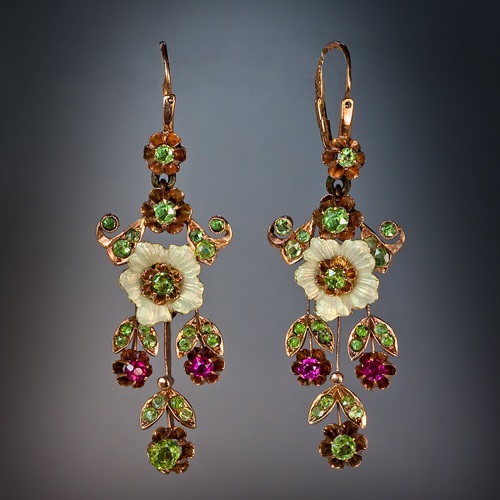 Vintage Long Earrings – delicate vintage Russian pendant earrings, made in Moscow between 1908 and 1917 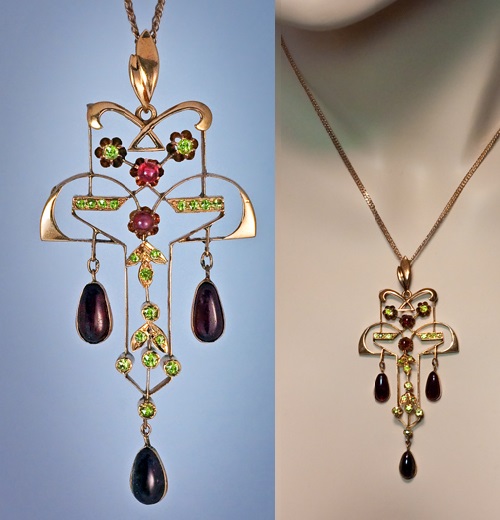 Demantoid and Hessonite Garnet Pendant. made in Moscow between 1908 and 1917 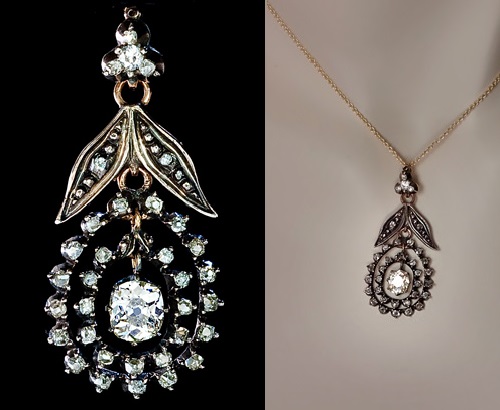 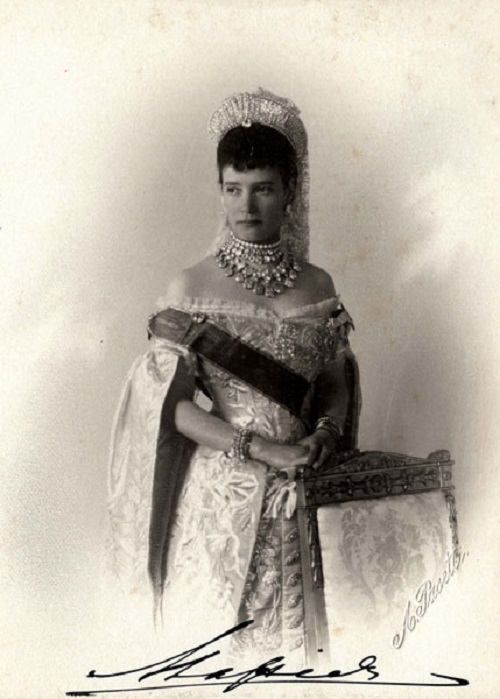 Empress Maria Feodorovna in Russian dress with tiara and necklace of 51 diamonds. 1883 Autograph photo for ‘Maria’ 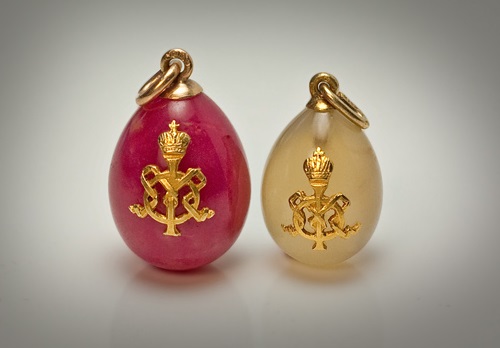 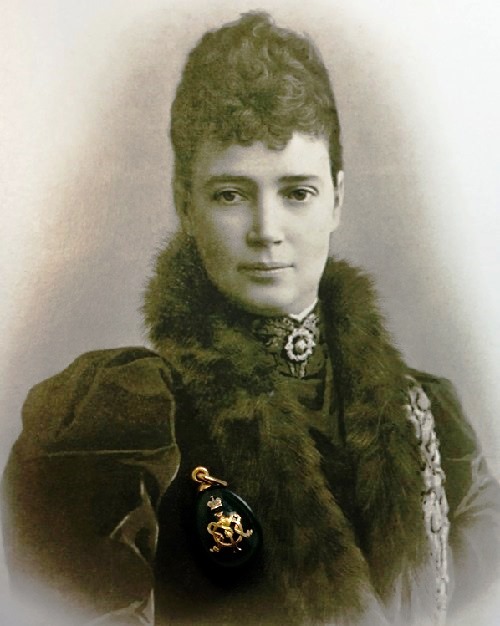 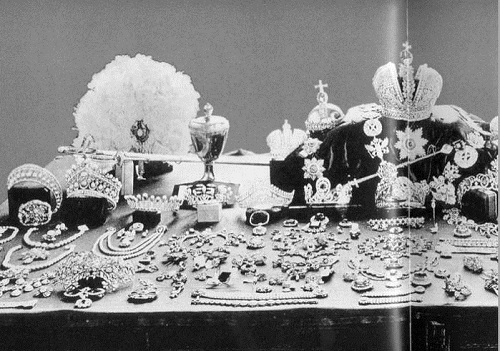 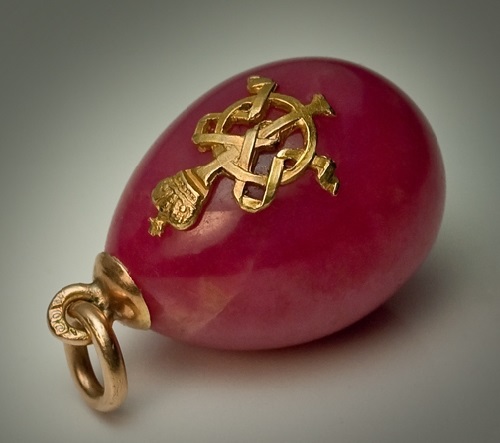 Siberian Rhodonite (Orletz) was one of the favorite stones of Carl Faberge. This particular egg has a solid pink color with no major inclusions. 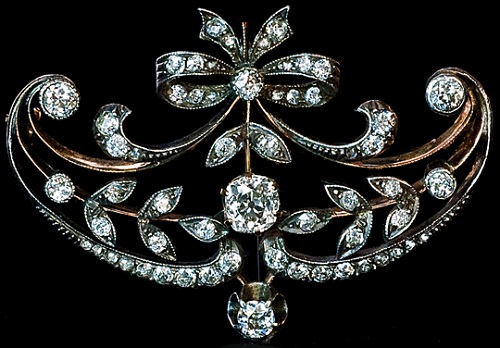 An Elegant Belle Epoque Diamond Brooch Pin. Made in Moscow between 1908 and 1917 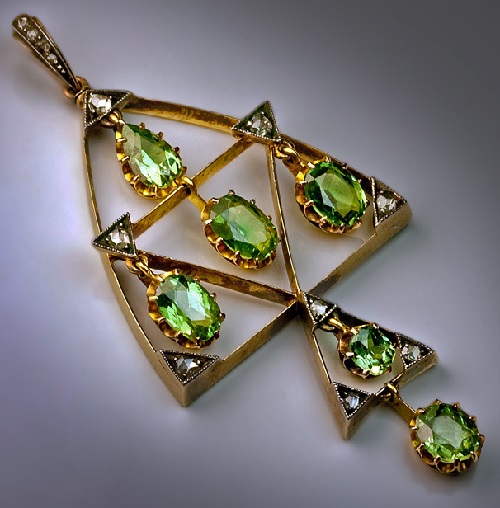 An Antique Demantoid, Diamond and Gold Pendant. Made in Moscow between 1899 and 1908 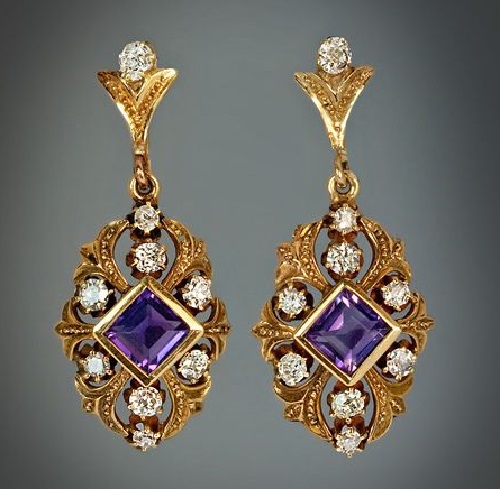