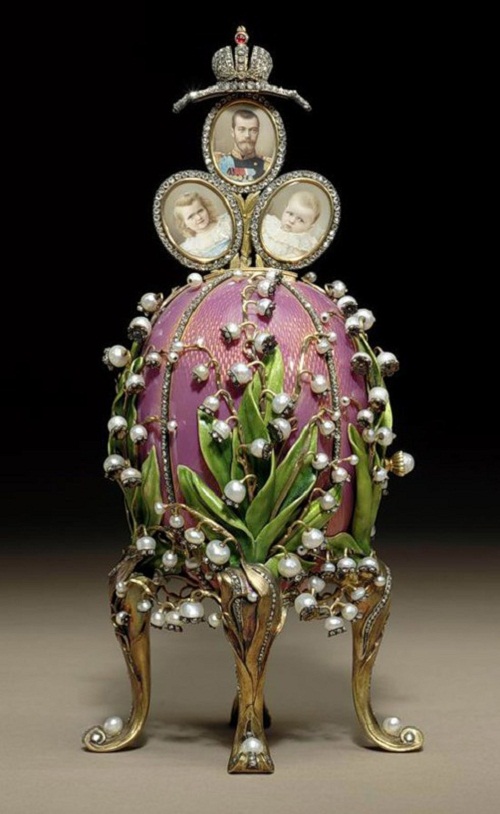 “Lilies of the Valley.” Retractable up three medallions with portraits of the emperor and his two older daughters Olga and Tatiana. Master Michael Perkhin. Nouveau style. Arguably, the most favorite egg of the Empress. Imperial Faberge eggs

Imperial Faberge eggs
Undoubtedly, the Faberge egg has become a symbol of luxury, and always regarded as masterpieces of the jewelers art. Faberge is any one of the thousands of jeweled eggs made by the House of Faberge from 1885 to 1917. Most were miniature eggs that were popular gifts at Eastertide. Besides, worn on a neck chain either singly or in groups.
The most famous eggs produced by the House were the larger ones made for Alexander III and Nicholas II of Russia; so often referred to as the ‘Imperial’ Faberge eggs. And out of the 50 made eggs, only 42 have survived.
Further two eggs, the Constellation and Karelian Birch eggs, planned for 1918 but were not delivered due to serious reasons. In particular, as Nicholas II and his family were assassinated that year, and Nicholas had abdicated the crown the year before.

Pinecone, made in the Imperial court by jeweler Carl Faberge firm in 1900

The egg covered with gold, blue enamel framed by semicircles, studded with diamonds and looks like a pine cone. Egg with Surprise – elephant driver starts up with a golden key. Who was given an egg – still unknown. “Pinecone” is in a private collection in San – Diego USA. It was sold at auction “Christy” in Geneva on 10 May 1989, to Joan Kroc, for over 3.14 million dollars. She was the wife of the founder of Mac – Donald. 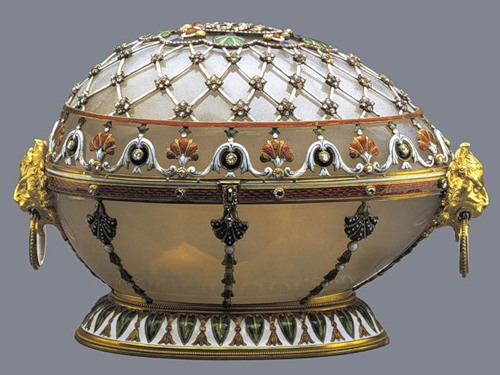 Jeweler – Michael Perkhin. Agate. Used type of casket Le Roy 17. Has been stored in the ‘Green Vault’ in Dresden, the home of Faberge. Surprise is unknown, there is speculation that it was crystal egg ‘Resurrection’ 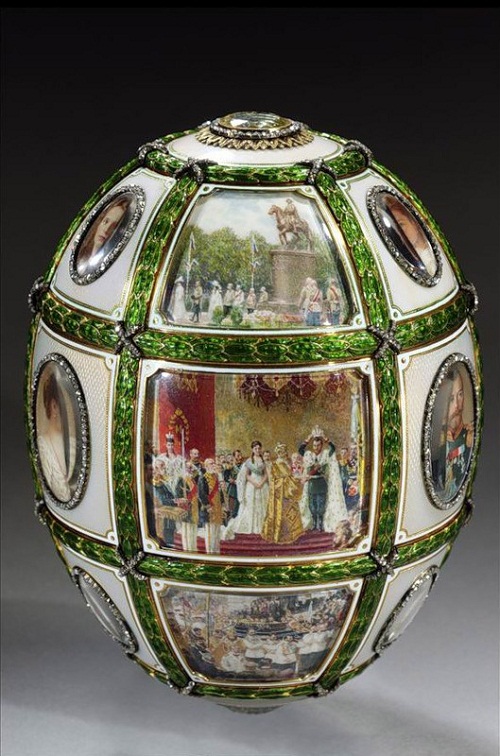 Known as ‘Imperial’ Faberge egg. Miniatures – 7 portraits of family members and 9 scenes of the reign, including the coronation of the opening of museums and monuments, the relics of Seraphim of Sarov. Jeweler – Henry Vingstrem 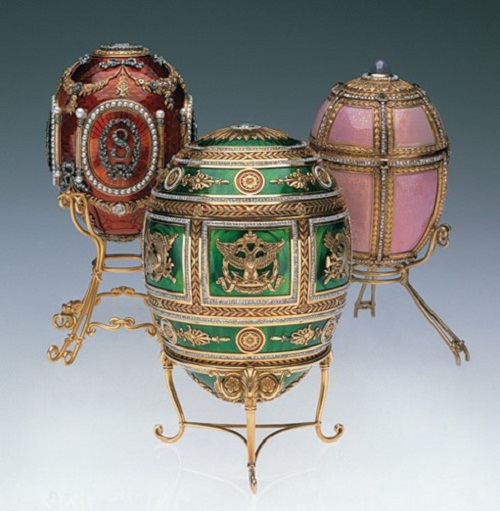 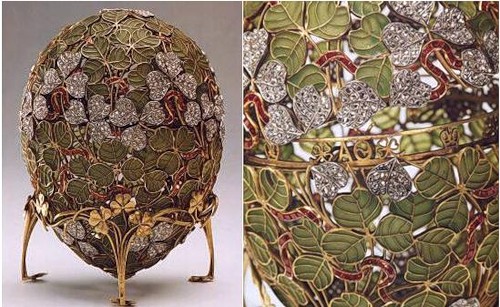 Made of precious metals or hard stones decorated with combinations of enamel and gem stones, Faberge eggs 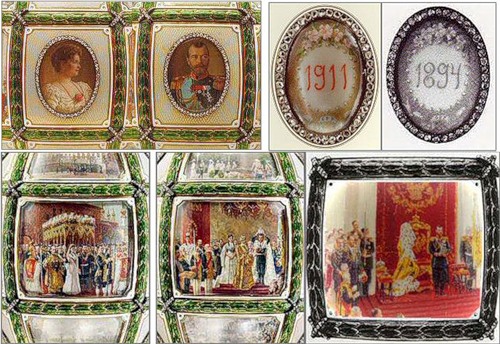 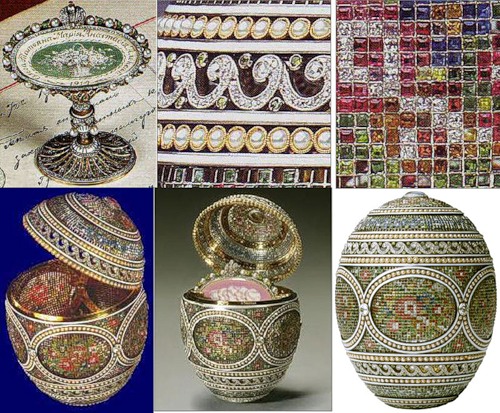 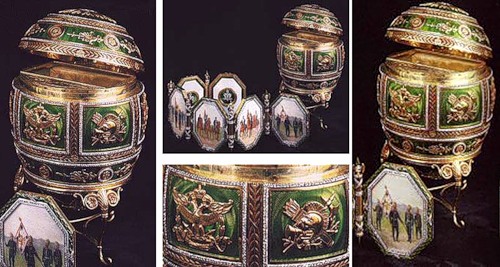 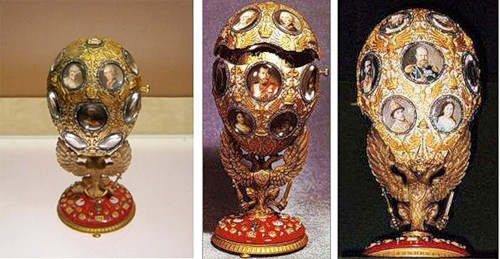 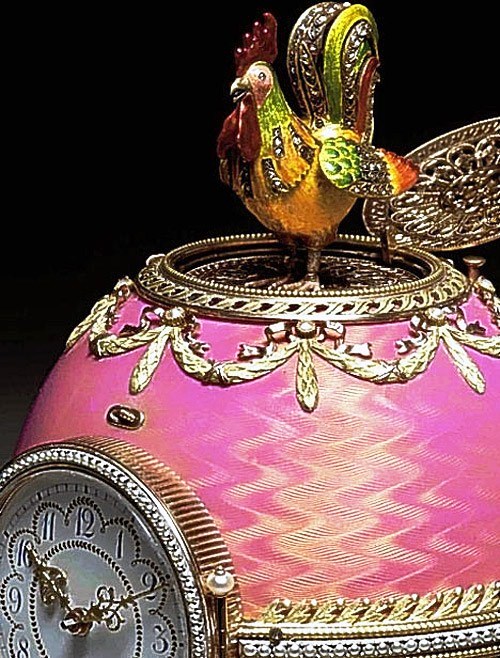 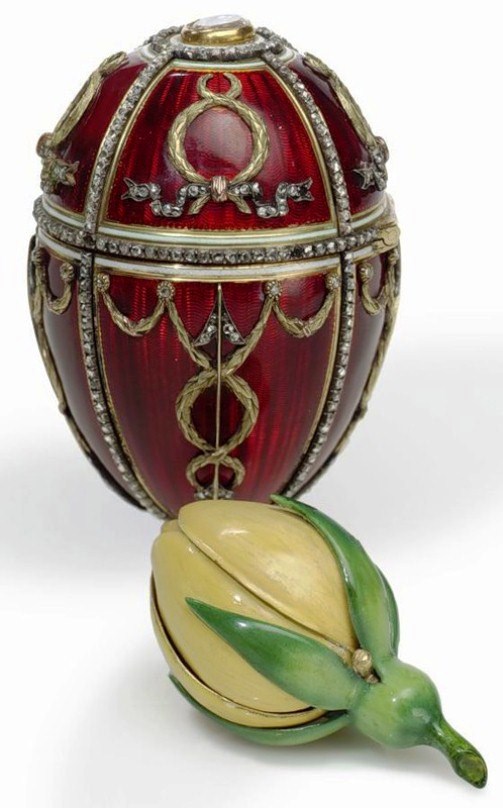 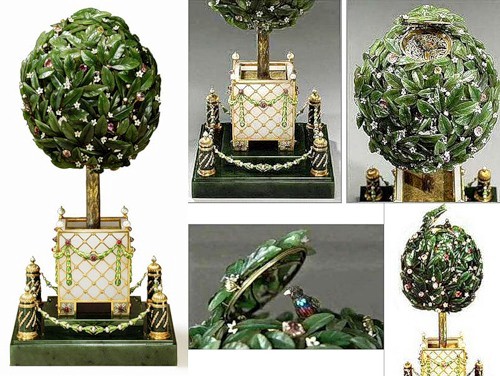 Bay Tree Imperial Faberge egg made in 1911 as present to the Empress, on the Fifteenth Anniversary 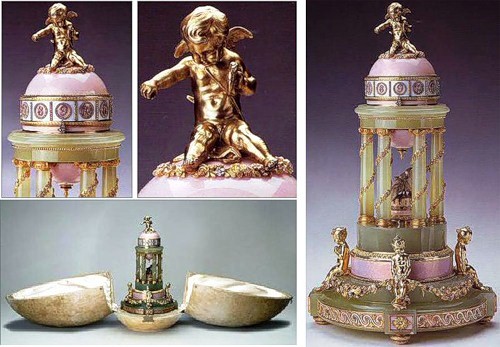 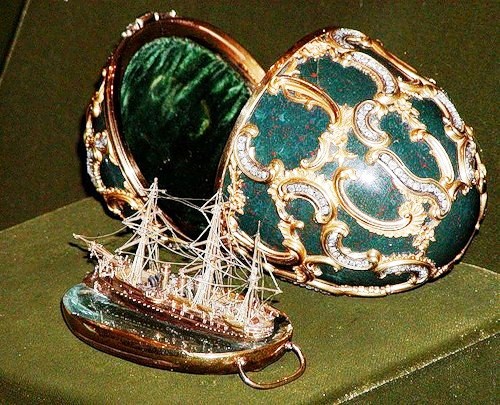 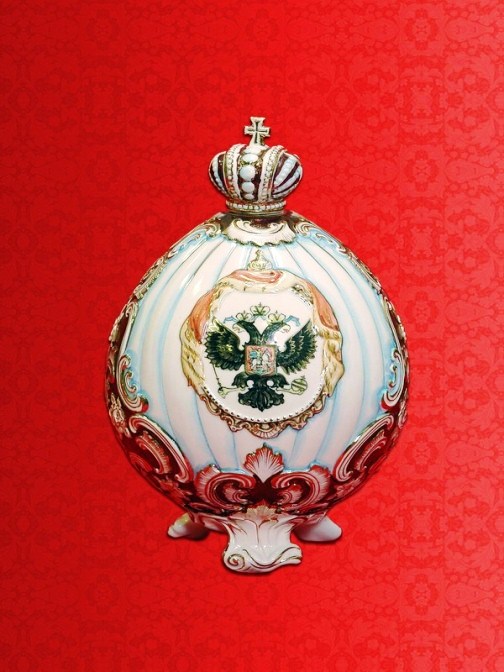 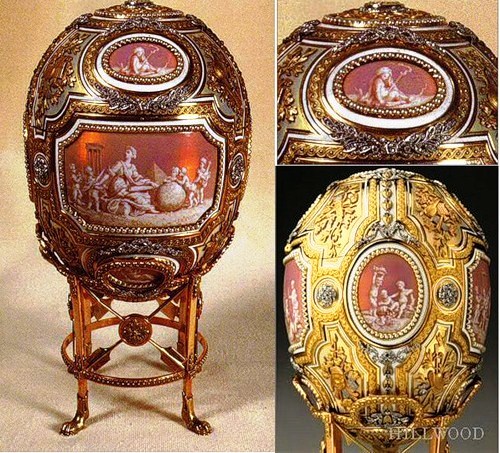 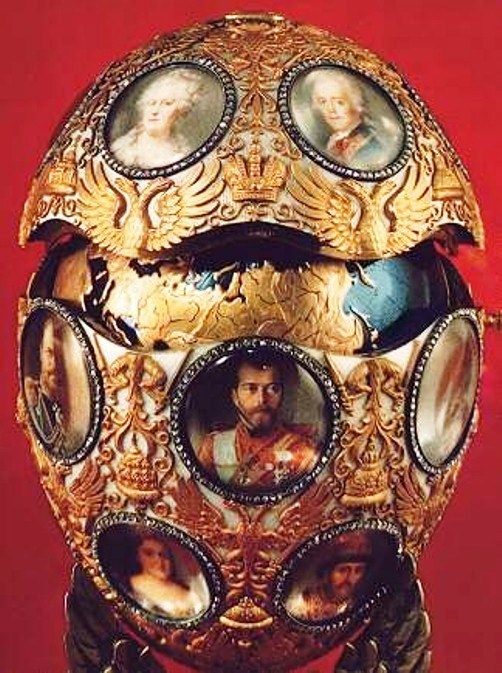 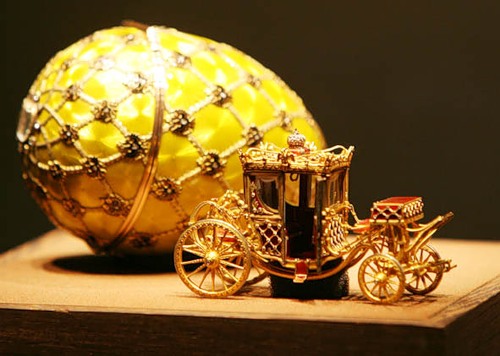 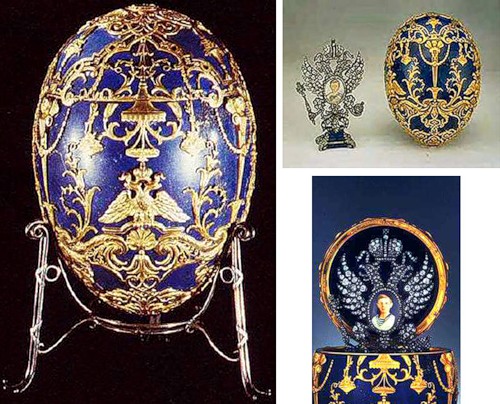 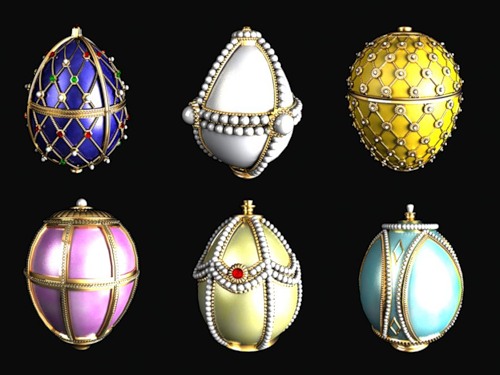 Made in Faberge style eggs 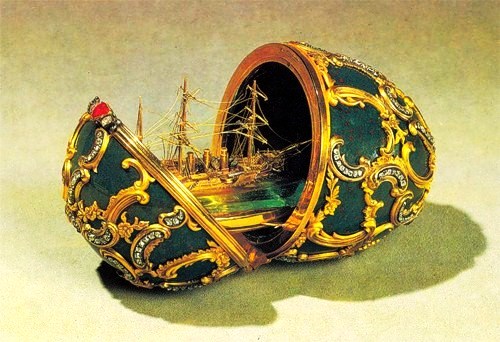 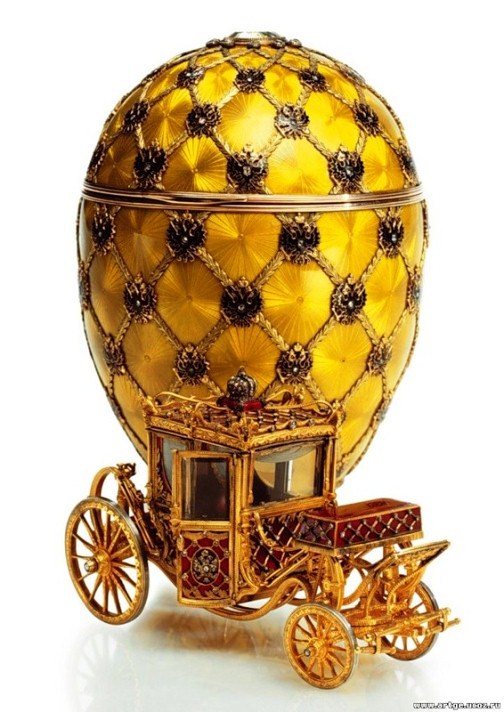 A copy of the Imperial coach at the coronation of Nicholas II. Jeweller – Michael Perkhin, George Stein. The most famous of the eggs. 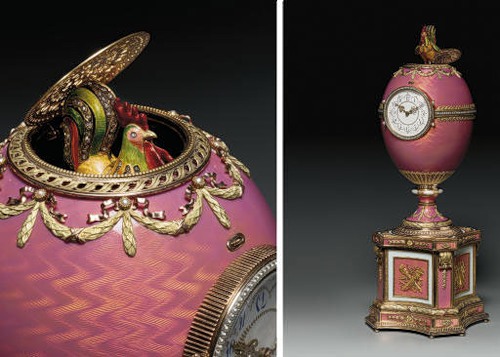 Egg Clocks, surprise inside – the hen 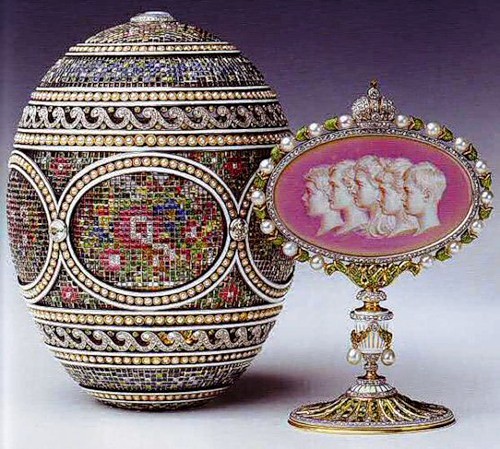 Surprise – a cameo with profiles of children. Designer – Alma Peel. Jeweler Albert Hallstrom. The last egg of the prewar period

The most simple and classic egg – white, yolk inside, then the chicken and inside the ruby ​​crown (not preserved)