Samovar symbol of Russian life
In addition to being a symbol of Russian life, Samovar is traditionally a part of folk art. Also, perfect canvas for painters. By the way, there is a museum of samovar in Tula, which is the main producer of samovars in Russia. Once, the great Russian poet, Prince Pyotr Andreyevich Vyazemsky wrote about the importance of samovar – “our family altar, Ark of household goods”. For better understanding Russian culture I’ve tried to translate some parts of his poem devoted to samovar.
Noteworthy, all images in this post depict samovars made in the city of Tula. 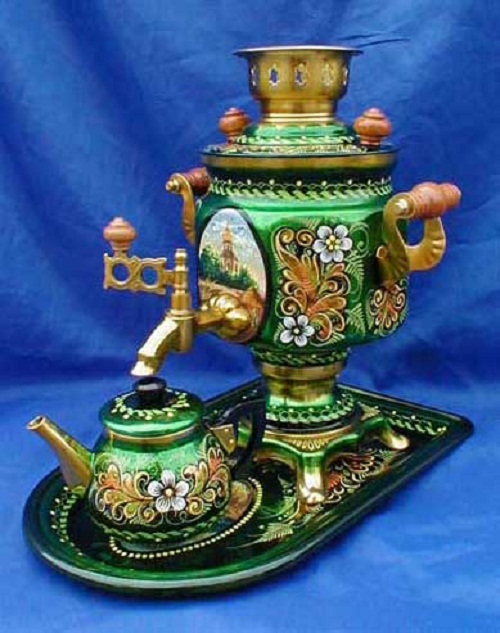 Painted in Khokhloma style Samovar, teapot, and a tray

All the present day legends are pouring and boiling in it,
There are old Russian time live recollections;
It survived alone in the wreckage of the past years,
And grandchildren joined their unquenchable grandfathers.
Russian Rococo discordant, clumsy,
Inwardly good, though ugly from the outside;
It keeps the heat better, and under its guise
Conversation is boiling the same as the water is.

If only there are home penates
From Golden Chambers to humble hut,
There is a copper Samovar, legacy of orphan,
The widow’s last penny and the luxury of poverty —
Everywhere in Russia, Orthodox and Holy
Where Family gathers it is always a Party Chief.
You wouldn’t be born to light, no marriage would be possible,
No “Hello” or “Goodbye!” would be said by friends,
No world affairs would end or begin,
Without the boiling Samovar, home solo singer,
Until it sang calling the family.

The poet said and his verse for us is clear:
“Even the smoke of motherland is sweet and pleasant to us!”
Not a doubt – but wasn’t it the samovar
The great poet of our time was inspired by?
And shadow of Derzhavin, somewhere near here,
Is requesting and praying,
In honor of him and orthodoxy in honor,
To add some wood to the fire and start a Samovar′. 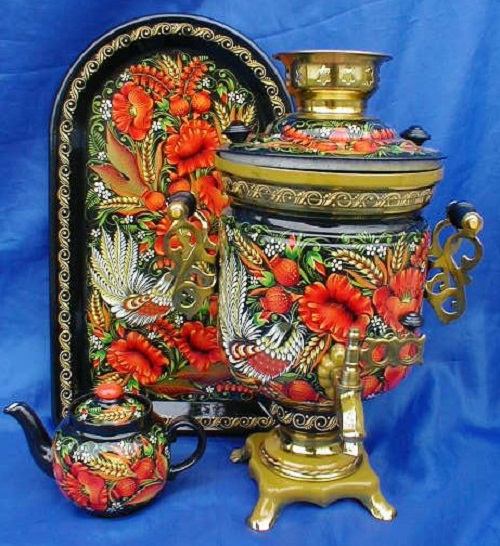 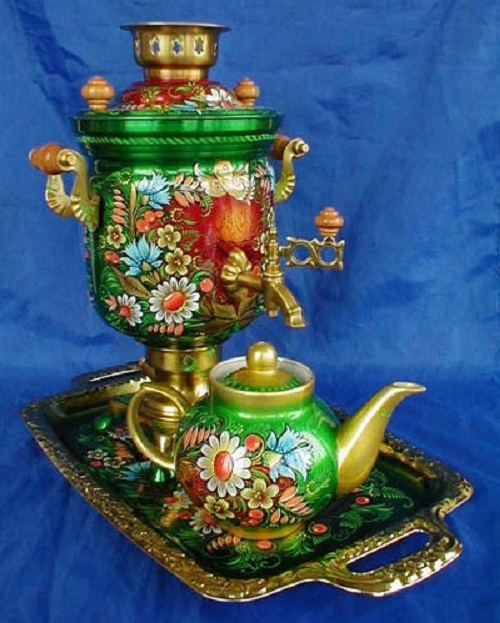 Most known in Russia – Tula samovar 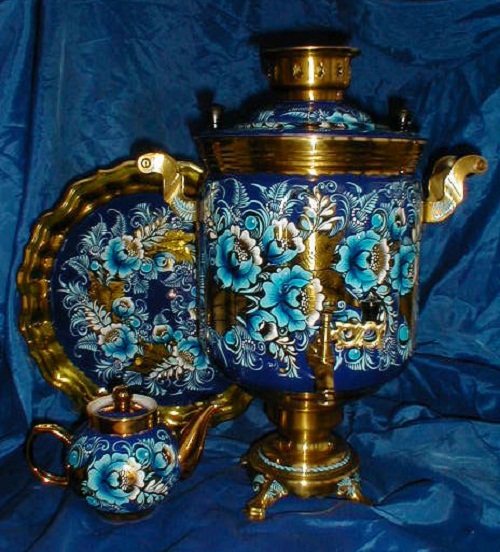 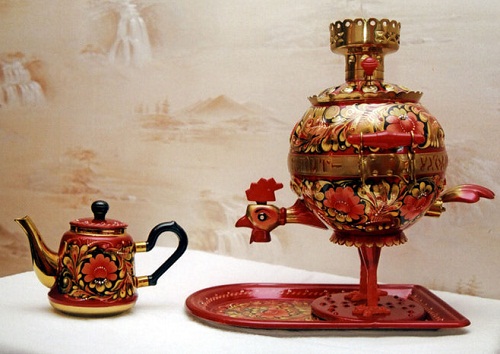 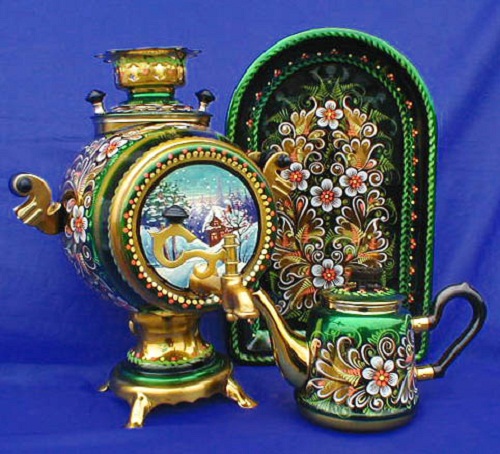 Sometimes, if not often, it is a real piece of art 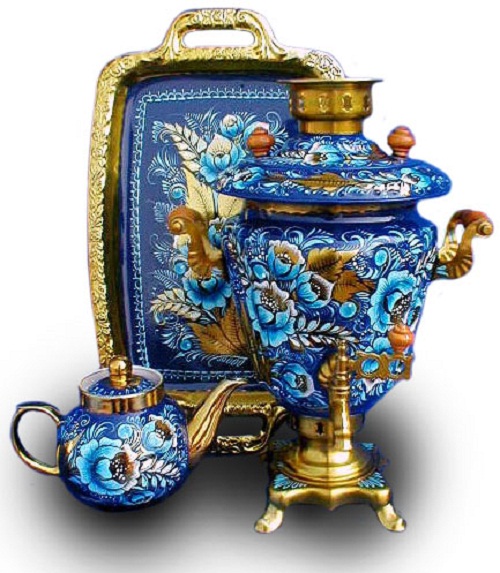 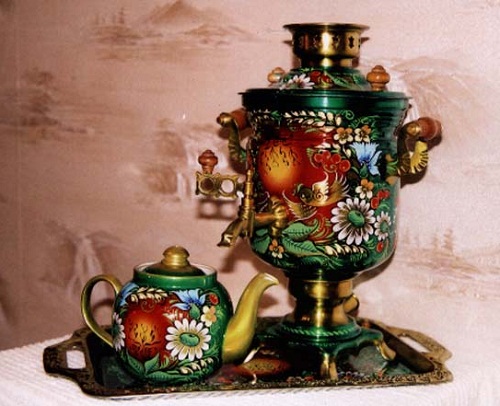 A usual set of three pieces – a teapot, a tray and samovar itself 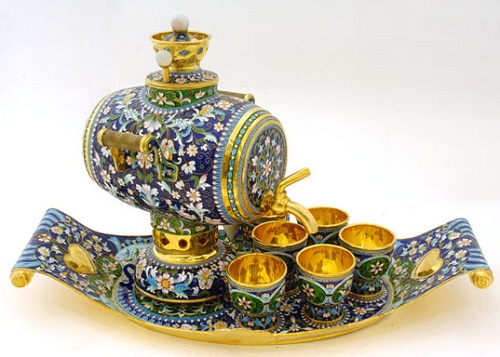 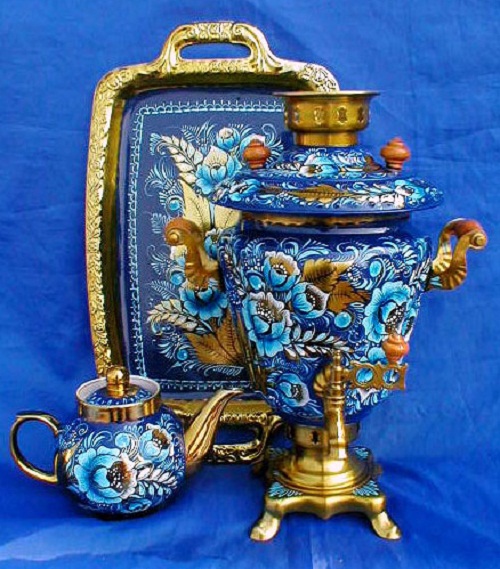 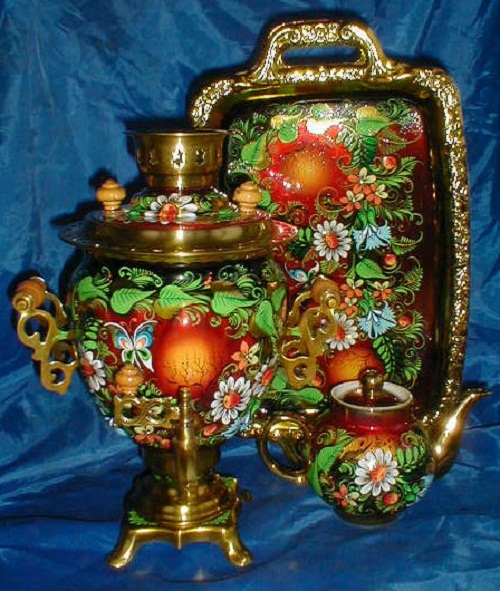 Berries and flowers on a black background 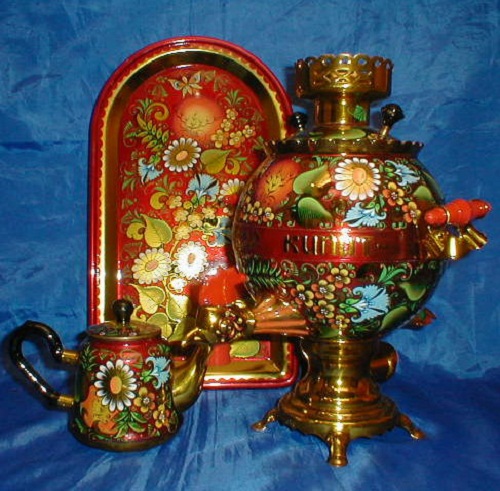 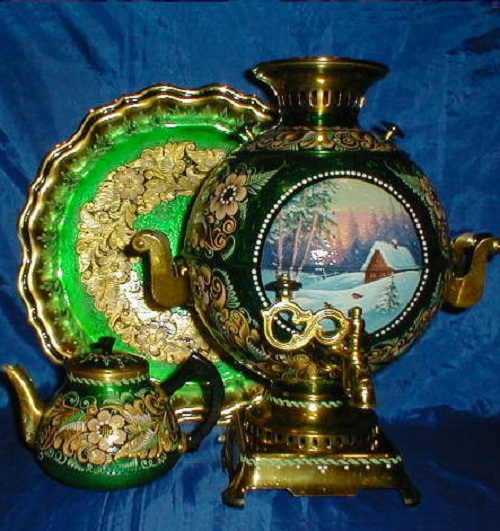 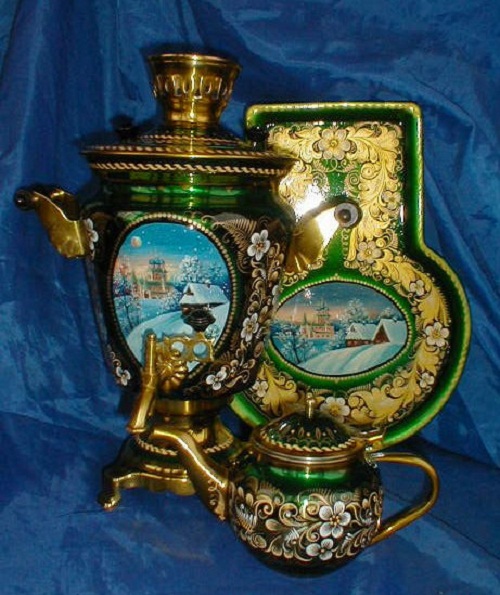 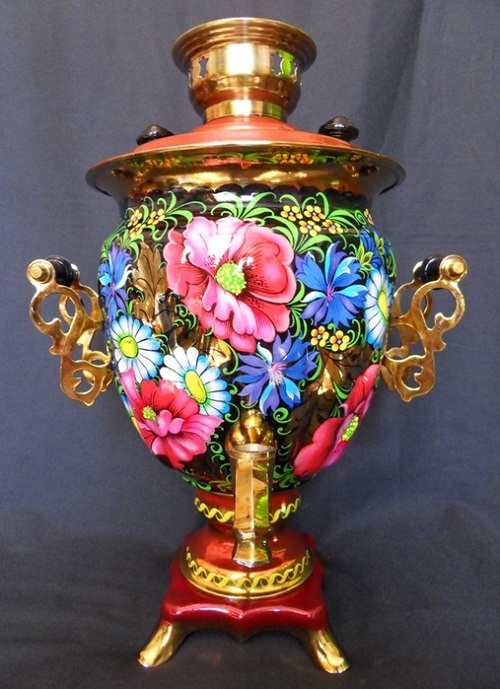 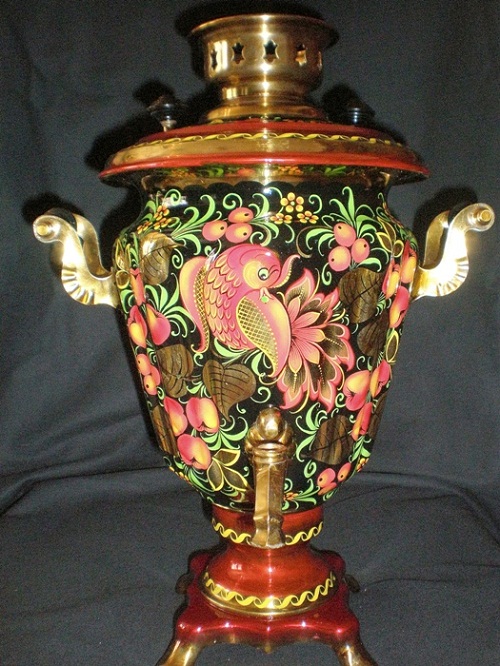 Canvas for the artists 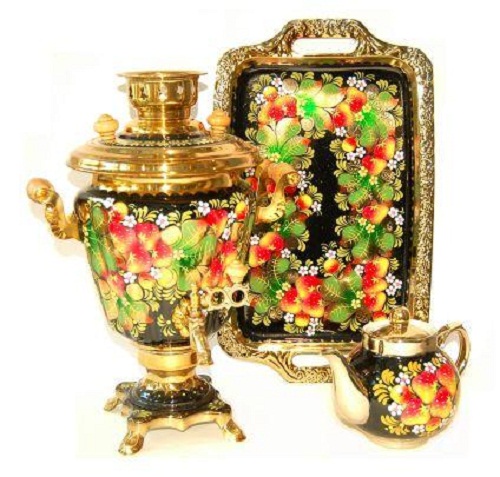 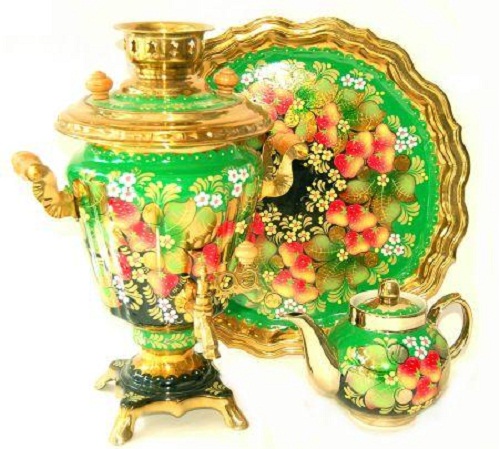 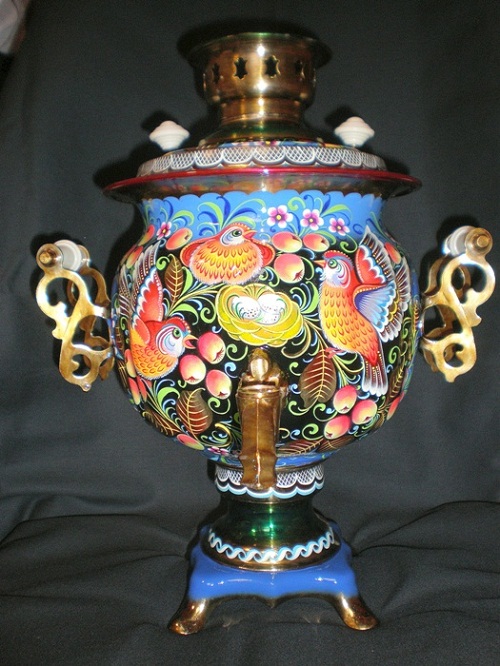 Birds of paradise and apples 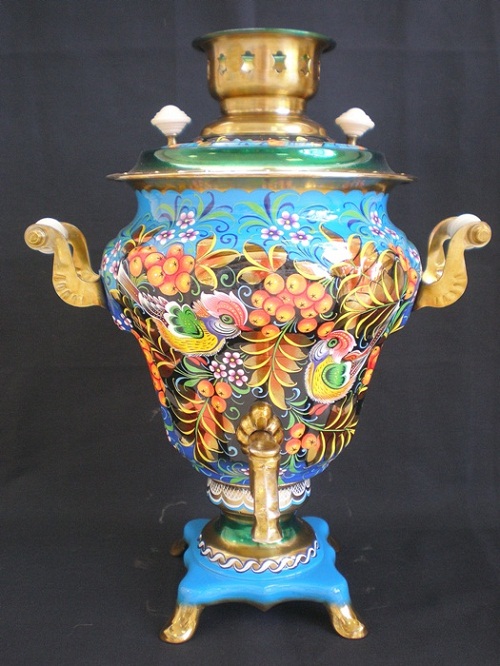 Berries on a blue background 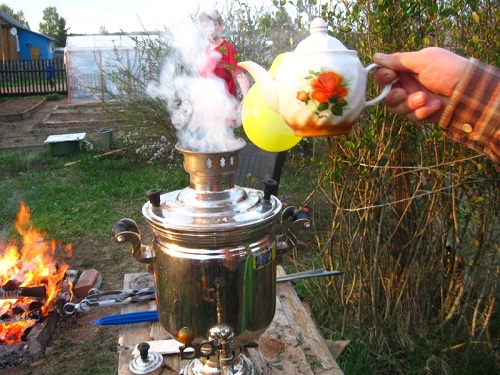 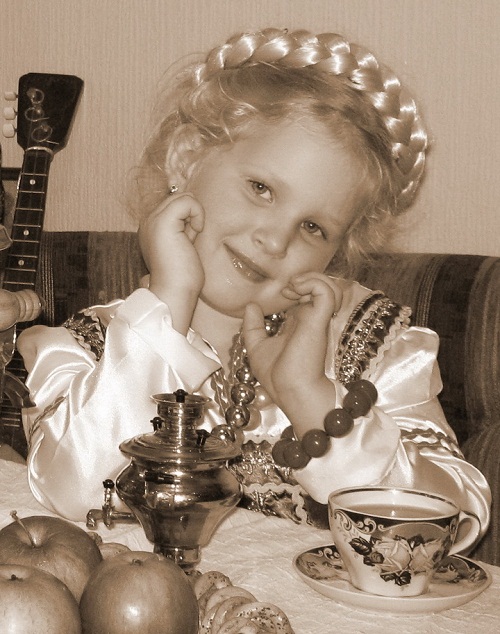 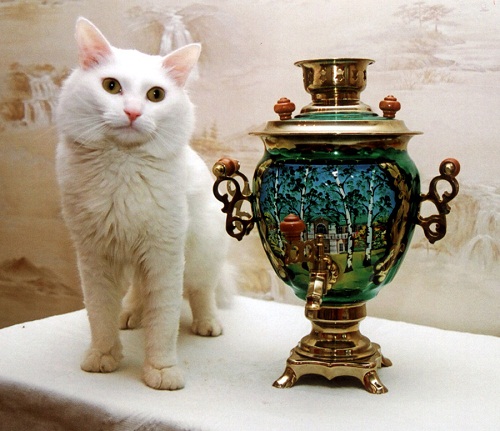 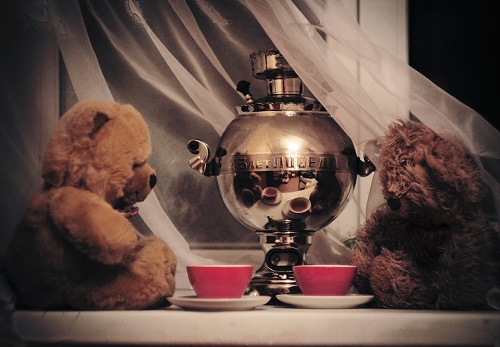 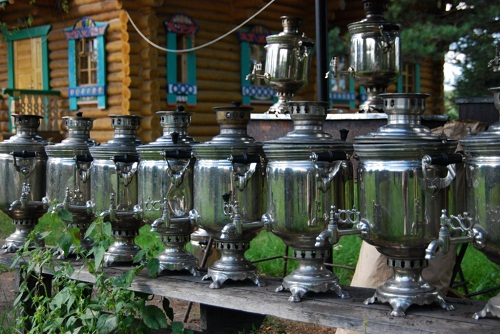