Self-immolation of widows in India
Called sati (suttee), it is a funeral ritual tradition in Hinduism, once widespread in India. According to it, the widow should be burned along with her late husband on a specially built pyre. As of today the tradition of sati is rare and forbidden. The adjective sati means good woman. The name comes from the name of the goddess Sati, also known under the name of Dakshayani that brought a sacrifice, not being able to carry the indignities of her father Daksha’s humiliation of her husband Shiva. The ritual of Sati existed in India for centuries, until in 1829. The British occupied the country declared it illegal. However, it did not help much – the self-immolation continues to this day. Last time the authorities banned the tradition of self-immolation of widows in 1956 and 1981. 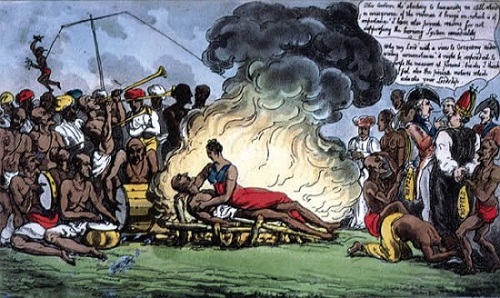 It is not hard to guess that widows often changed their mind once they got into the fire, and tried to jump out of the flames. This behavior was seen as the most terrible disgrace. The ceremony was attended by friends and family of the deceased, who considered it their sacred duty to drive widow back to the fire. For this purpose, special bamboo sticks were laid nearby. And when the sticks were not able to solve the problem, woman was tied.
In the 18th century there was an incident when the widow ran out of the flames and plunged into the river, on the banks of which the ceremony was held. She was caught and thrown back, after a broken allegiance to the arms and legs. 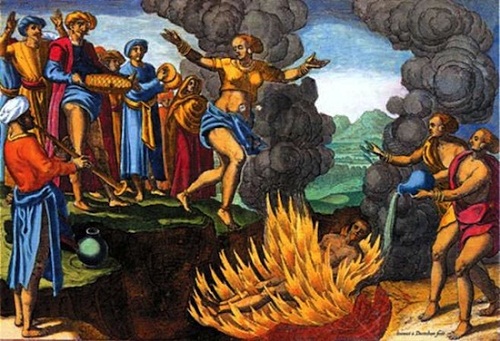 Once upon a time Indian widows were at the very bottom of the social ladder. All that was associated with the widow, was considered unclean. Widows’ life turned into a living hell. Apparently, it was believed that the grief of losing a loved one is not enough.
Sati is still sometimes occurs mainly in rural areas. Since 1947, India recorded 40 cases, most of which falls on the area Shekhawat of Rajasthan.

There is a well documented case of Sati, which occurred in 1987 with the 18-year-old childless widow, Roop Kanwar. In the wake of this case were adopted additional legislative acts against Sati, first by the government of Rajasthan state, and then by the federal government of India.

May 18, 2006 Vidyavati, a 35-year-old widow was allegedly committed sati by jumping into the funeral pyre of her husband, in the village of Rari Budzhurg Fatehpur district of Uttar Pradesh. August 21, 2006 Yanakari, 40-year-old woman was burned on a funeral pyre of her husband Prem Narayan in Sagar.
In the minds of Rajputs the transformation of a woman into a Sati does not, as is often assumed, result from the act of self-immolation. The word Sati means “a good woman” and not, as English speakers tend to think, an act. We may speak of Sati as something one commits, but Hindi speakers define sati as that which one becomes. This usage reflects the understanding all Rajput women have of the Sati: becoming a Sati is a process, a process instigated at the moment of marriage or occasionally even at the moment of betrothal.

As there is parallel fire symbolism in the marriage ritual and Sati cremation, circumambulating a funeral pyre transforms a fiancee into a wife, who can then become a Sati. The Sati serves women as an accessible ideal, for she has become a Sati by fulfilling the role that they aspire to fulfill. 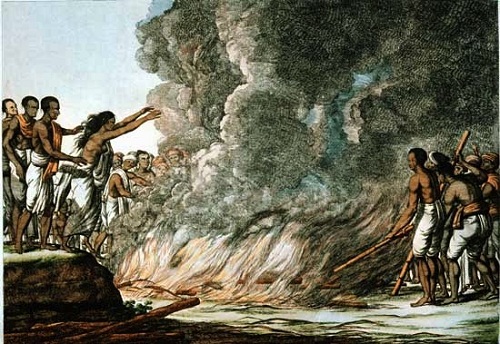 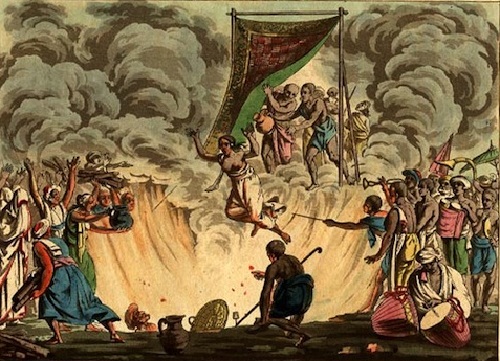 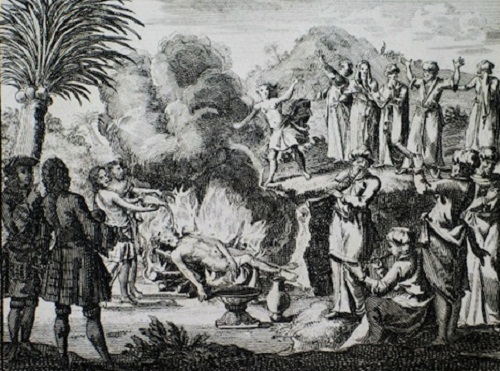 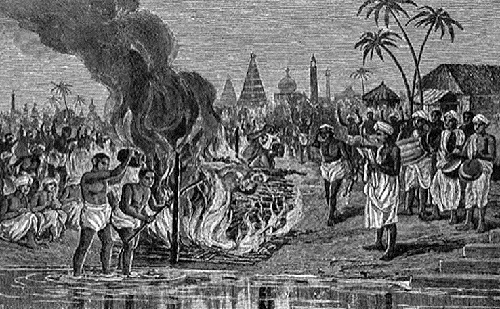 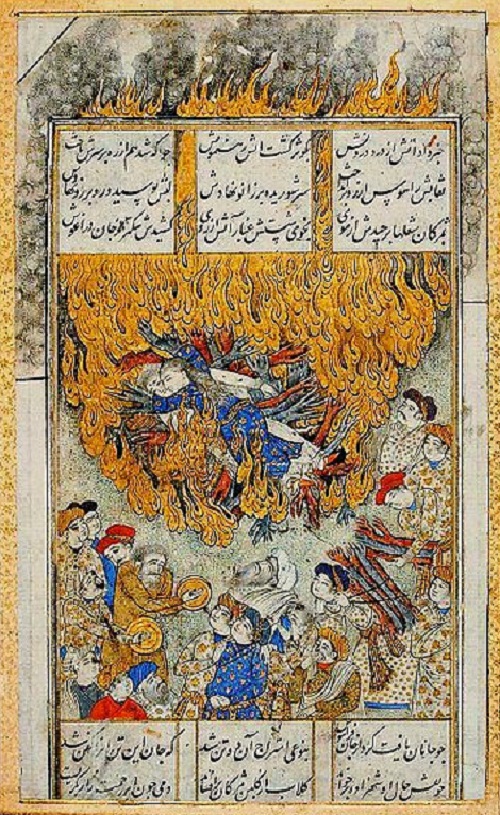 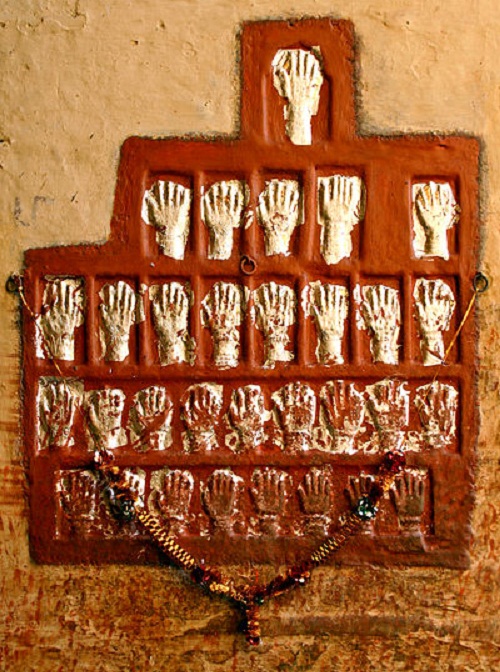 Jodhpur Sati. A shrine to wives of the Maharajas of Jodhpur who have committed sati. The palmprints are typica 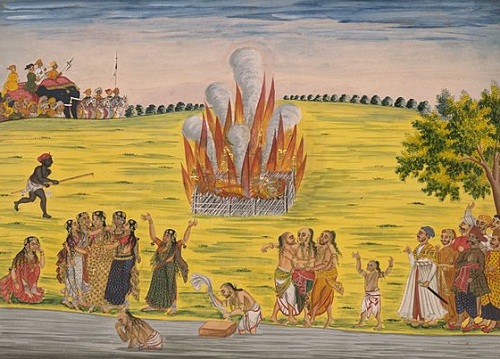 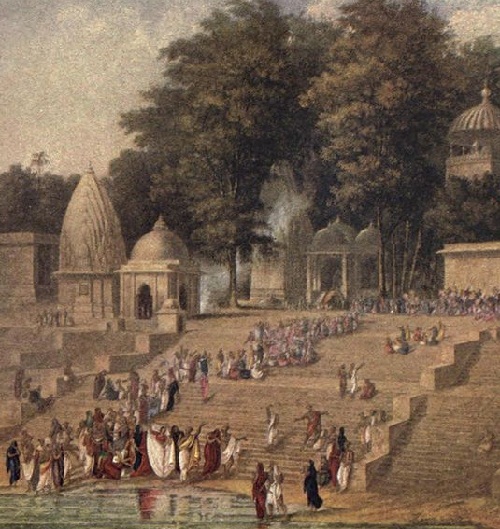 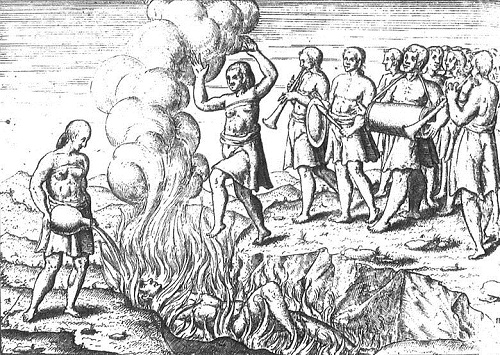 Self-immolation of widows ritual in India 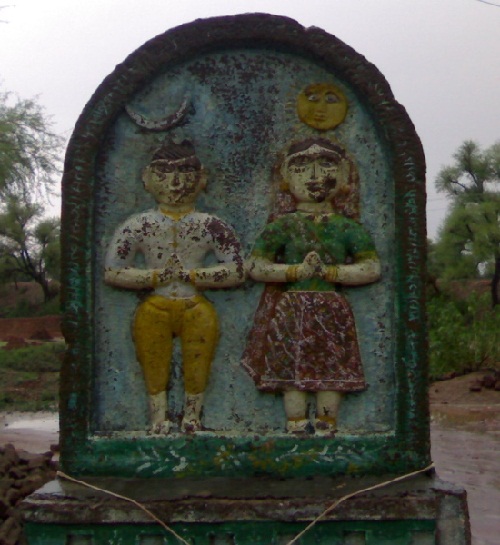 Monument to Sati at Ahar