The most famous ghost photos 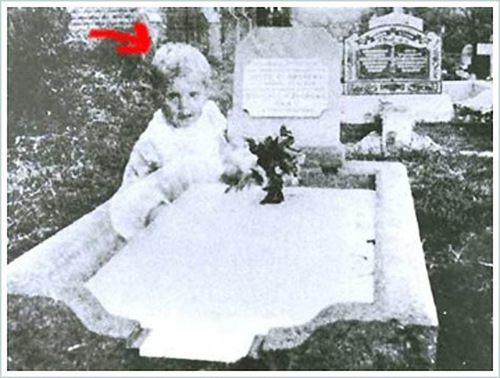 Ghost of a young child sitting next to the grave. The most famous ghost photos

The most famous ghost photos
A woman named Andrews visited the grave of her daughter Joyce, who died at age 17. Andrews saw nothing unusual when doing a snapshot of gravestone. However, when Andrews came home and processed the film, it showed something that shocked her. In particular, it was the image of a young child sitting next to the grave. A ghost child saw Andrews as she looks directly into the lens. 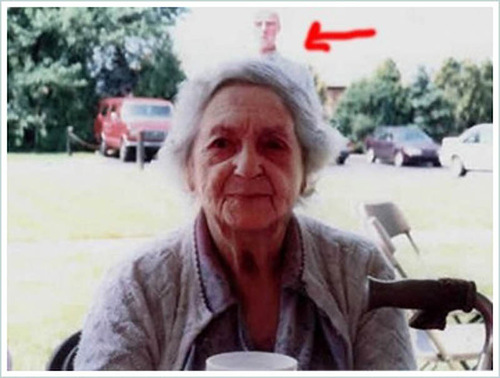 “The person standing behind my grandmother’s – it’s our grandfather, who died Sunday at the same, but the August 14, 1984”. The most famous ghost photos

“The woman in the photo – my grandmother,” says the author of this picture. “She lived alone in the house up to 94 years old when her mind started to weaken and had to send her to a nursing home. After the first week of stay at home for the residents and their families held a picnic. On this day, my sister has made only two pictures, and this is one of them. Photo was taken in the Sunday, August 17, 1997, and we believe that the person standing behind my grandmother’s – it’s our grandfather, who died Sunday at the same, but the August 14, 1984. The man in the picture, we did not notice for three years prior to Christmas 2000, when after the death of my grandmother, we decided to view available pictures of the house.

My sister liked this picture because her grandmother that she had made another copy for our mom, but how could we not notice the man in the photo as much as three years! When we arrived at his parents’ house on the day of Christmas, my sister handed me a picture and asked, “What do you think, on this man who looks like a picture?” It took me several seconds to realize what she has in mind. I just have no words. We compared the image with the existing black-and-white photographs of his grandfather. It really was him! ”
You do not need to be a photographer and an expert to say when you love someone with all your heart, nothing can stop you from being able to be with him. But it is always nice to know that love never dies. 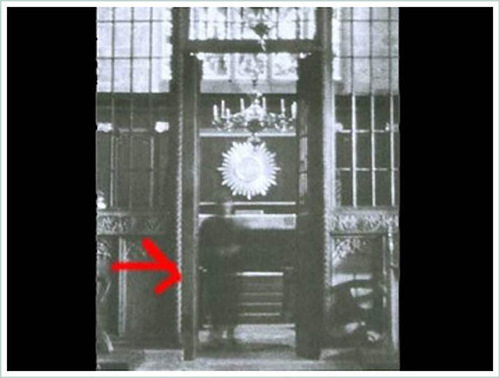 According to the author of a book about ghosts in this shot taken in the church was another photographer, but neither he nor the person who made the shot, did not see any ghosts, nor man. According to his dress, he is a priest. 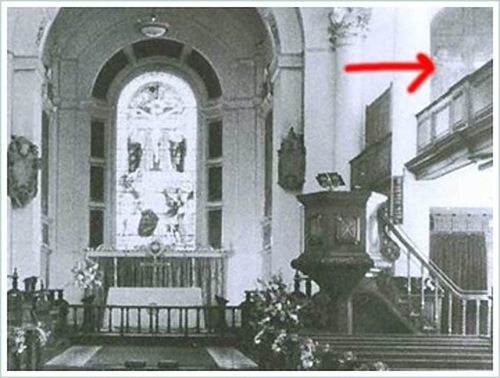 Picture of Interior. In 1982, photographer Chris Brackley took a snapshot of the interior of the church of St. Botolfa London, but did not expect what he saw on film. In the upper right corner you can see the figure of a woman. According to Brackley in the church were only three people and not one of them was in the place where the figure is visible. 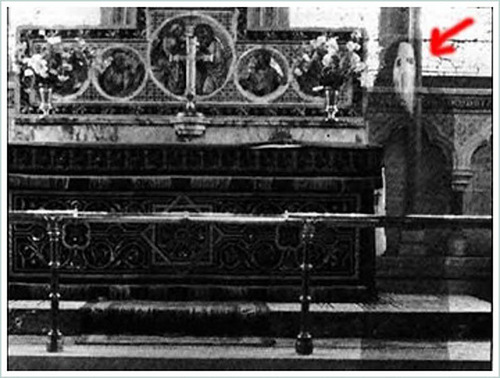 The photograph taken in 1963, a priest KF Lord Newby at the church in North Yorkshire, England

The picture caused a storm of controversy, as the ghostly face and gaze direction give rise to talk about the overlay frame. But, they say that this picture has been studied in detail by experts who came to the conclusion that it is not two frames superimposed one on one, namely, a solid shot. 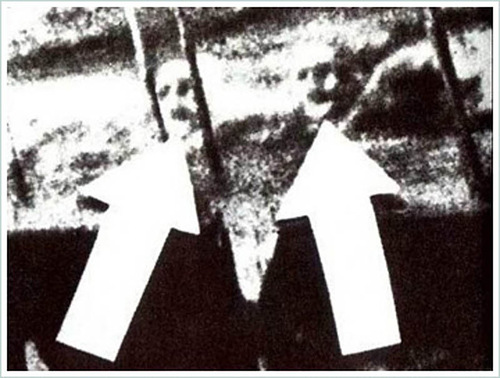 In December 1924, James Courtney and Michael Meehan, crew members were cleaning Votertauna cargo hold of an oil tanker on route from New York to the Panama Canal. Poisoned by gas and vapor, as a result of an accident, they died. And according to the tradition of the Marine, buried at sea. The next day one of the crew members saw their faces in the waves on the right side. They appeared in the water for 10 seconds, and then melted. The following days other crew members often saw died people in the waves. Upon arrival in New Orleans, the ship’s captain Keith Tracy reported on the strange events of their employers, and they advised him to capture the ghostly faces on film. Captain Tracy purchased a camera and went out into the sea. The captain made six pictures and then shut the camera in the ship’s safe. When the film is shown in New York, in five shots, there was nothing but water, and at last it was possible to clearly see the faces of the dead sailors. The negative was investigated for fake Burns detective agency. After the change of crew faces no longer appeared. 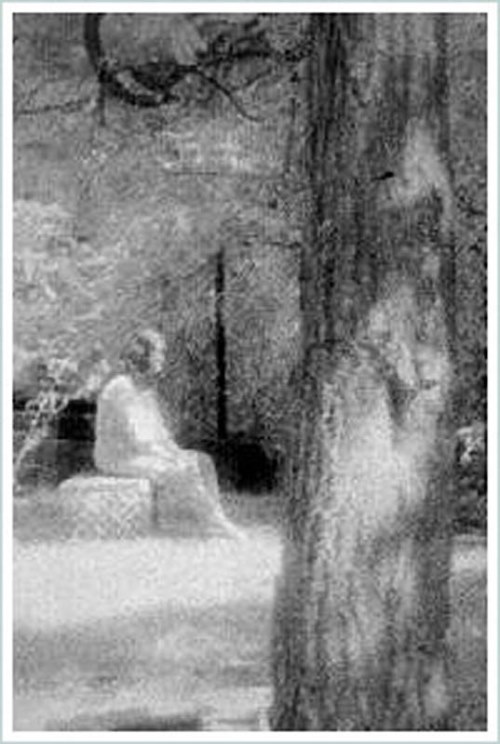 The picture taken during the investigation of the cemetery Bachelor Grove, near Chicago by the Society of Research of Ghosts (IPR)

August 10, 1991 several members of the IPR were in a small abandoned cemetery on the outskirts of the forest reserve in the suburb of Midlothian, Illinois. The cemetery has a reputation as one of the most mysterious of cemeteries in the U.S.. There are reports of more than 100 different cases of strange phenomena that have occurred here: the disappearance, strange sounds and visions, then even glowing balls of light were observed. After developing one of the photos made the IPR, it is possible to see a lone woman sitting on a tombstone. Parts of her body are translucent, and her clothes were obviously old. 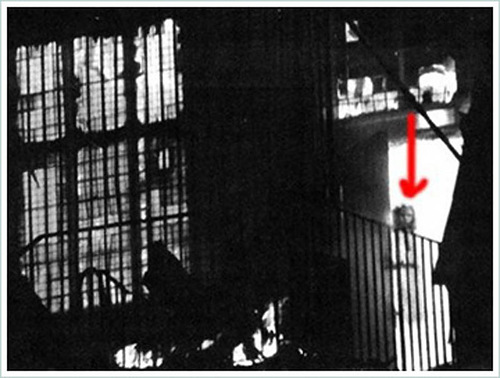 More than 15 years ago, November 19, 1995 in the County of Shropshire, England Vem Town Hall burned to the ground. While firefighters were trying to cope with the fire and extinguish the fire, the home owner, Tony O’Reilly took a few pictures of burning houses. After reviewing the photos, one of them, he saw a little girl standing in the burning doorway. Nobody else noticed the presence of a little girl in the house, especially in such close proximity to the fire. Digital Photography and the original were transferred to the experts who came to the conclusion that the image is not subjected to any treatment. So, what did the ghost girl do in the big fire? As it turned out, back in 1677 a fire destroyed most of the wooden buildings of Vem Town Hall. They said that the fire started after a 14-year-old girl named Jane Charm, knocked a candle in a haystack. A girl died in a fire, as well as several other people, her ghost still wanders somewhere close by. 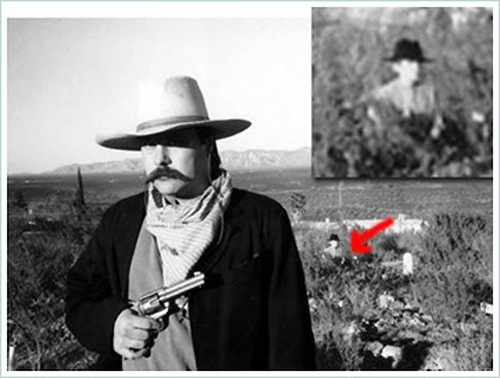 A man in a dark hat. famous ghost photos

Terry Ike Clanton took pictures of his friend in a cemetery Buthill. Photo was taken in black and white film, as one would like to take pictures in the style of the Wild West. Clanton took the film for development, and was very surprised when received the shots. In the upper right hand corner an image of man in a dark hat. Judging by the height of the figure and foreshortening – a person either has no legs, or he is on his knees … or rises from the ground 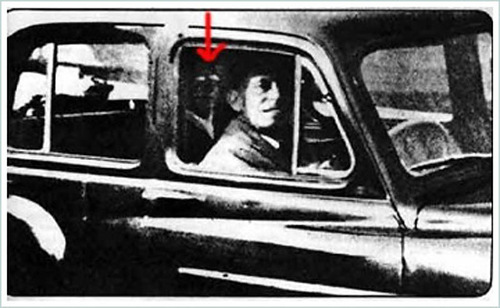 While visiting the grave of his mother in 1959, Mabel Chinner photographed her husband, waiting for her in the car. After developing the film, both spouses were surprised to find the photo on the back of a figure that resembles a dead mother Mabel. 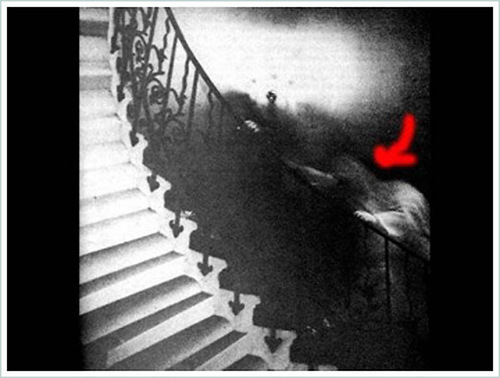 Ralph Hardy, a retiree from White Rock, British Columbia, took this famous picture in 1966. He intended only to remove an elegant spiral staircase in the Queen’s House section – part of the National Maritime Museum in Greenwich. However, after the developer in the picture was a figure that goes up keeping both hands on the railing. Experts (including those from Kodak), who investigated the original negative concluded that no any manipulation was made. 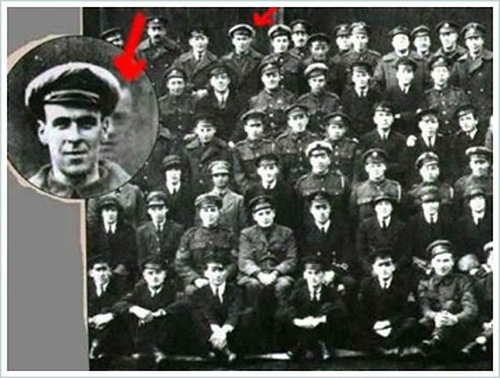 Near one of the pilots you can clearly see the face of another person. It is believed that the person is Freddie Jackson, aircraft mechanic, who was killed in an accident (he was killed by a propeller), two days before the shooting. His funeral took place in the day when the picture was taken. Jackson’s colleagues easily recognized him in the picture. They decided that Jackson did not realize that he had died, he decided to participate in the group photo 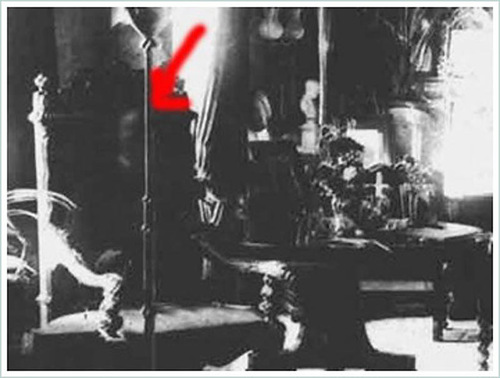 The picture you can see – the blurred figure of a man sitting in a chair. It is believed that this is the ghost of Lord Kombermere, commander of the British cavalry, early 19th century, who died in 1891 as a result of hitting a horse cart.

The most famous ghost photos 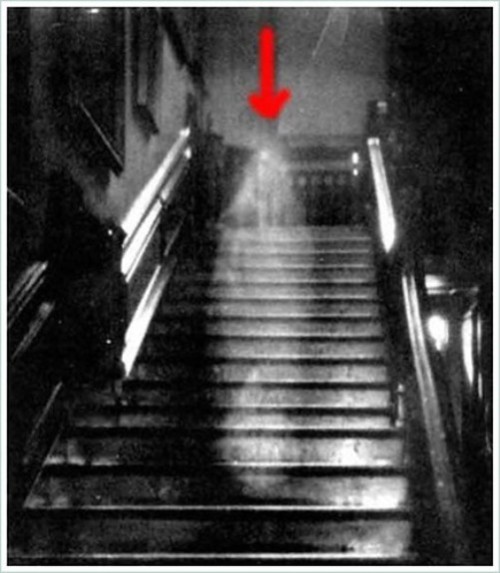 In fact, the portrait of ghost “Brown Lady” is the most famous ghost picture of all time. It is believed that the ghost is Lady Dorothy Walpole, second wife of Charles Townshend. The couple lived in Raynham Hall in Norfolk, England in the early 18th century. It was rumored that before marriage Dorothy was the mistress of Lord Wharton. Charles suspected that Dorothy had committed adultery with Lord Wharton. Although, in accordance with the documents she died and was buried in 1726, people suspected that this was the view, and that Charles had locked his wife in the farthest corner of the house until her death, which occurred many years later. 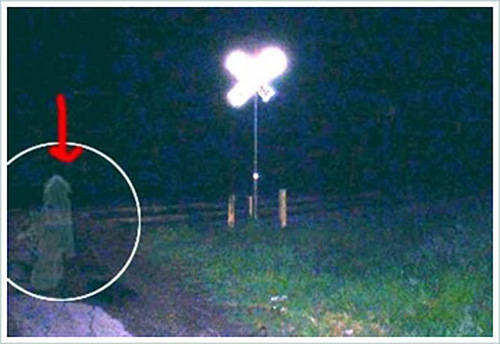 A railroad crossing in Texas

A strange legend surrounds a railroad crossing south of San Antonio, Texas. It is said that at the intersection of the highway and the railroad had been killed several children, and their ghosts still live near their place of death. Enthusiasts have investigated the site and took a few shots, one of which you can see the ghost of a little girl. Near her feet much something like a dog, or, as some believe, a teddy bear.